The Lions Club Super Pull of the South made a welcomed comeback with a solid crowd on Friday night, followed by a packed house on Saturday at the Lions Club Motorsports Park in Chapel Hill.

“The packed crows at Tomah (Wisconsin) a month ago gave us hope that the fans would be here,” longtime Lions Club member and photographer Bill Beasley said. “The crowd was super, possibly the best ever. We are very happy.”

In 2019, the Saturday night session was cancelled due to a summer gulley washer and the entire 2020 event was cancelled because of the Covid 19 pandemic, so fans from all over the country were as revved up as the pullers in anticipation of this year’s Super Pull. 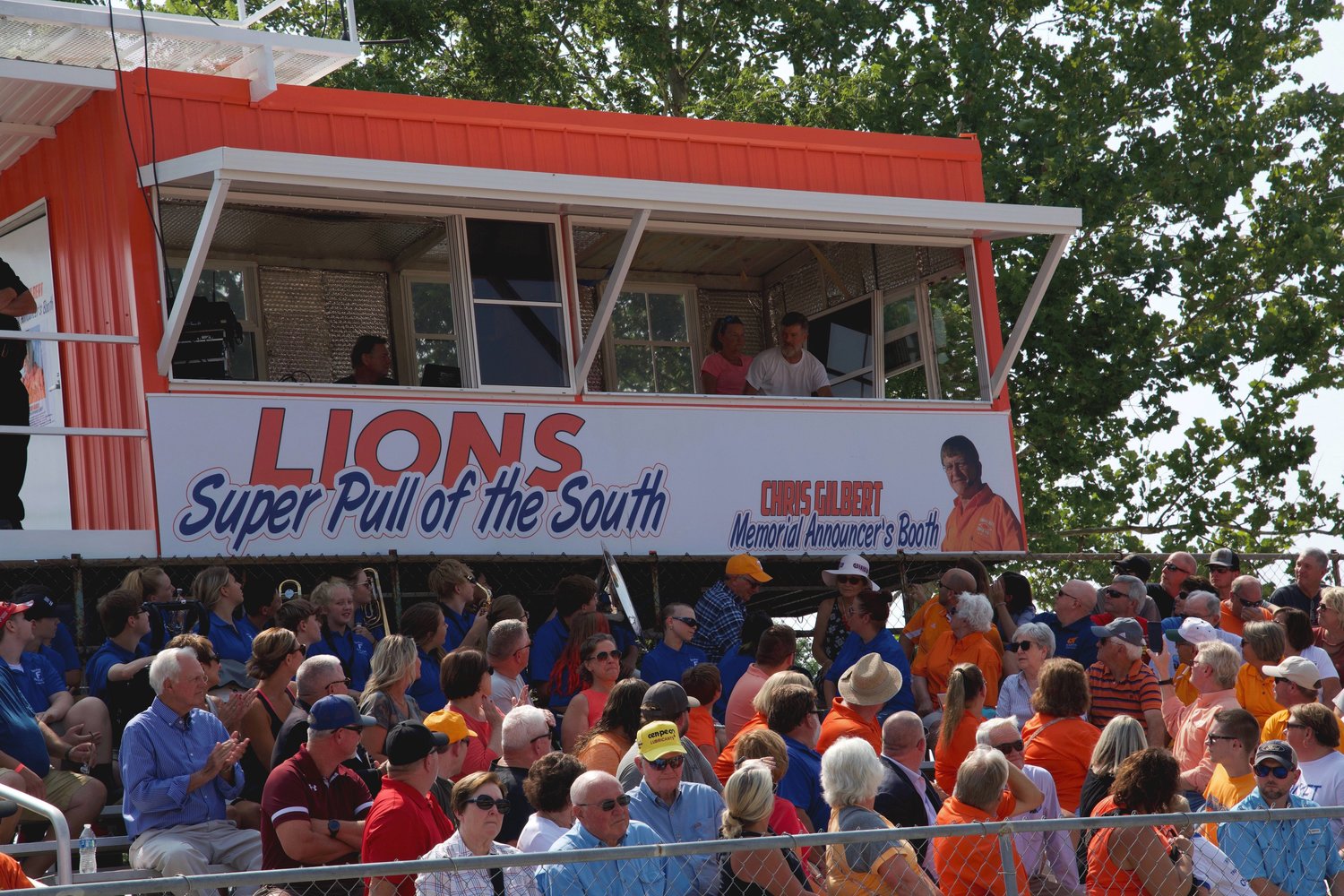 At the memorial service on Saturday, the freshly painted orange press box was dedicated to longtime tractor pull chairman and announcer Chris Gilbert by being named The Chris Gilbert Memorial Announcers Booth.
Photo by Bill Beasley 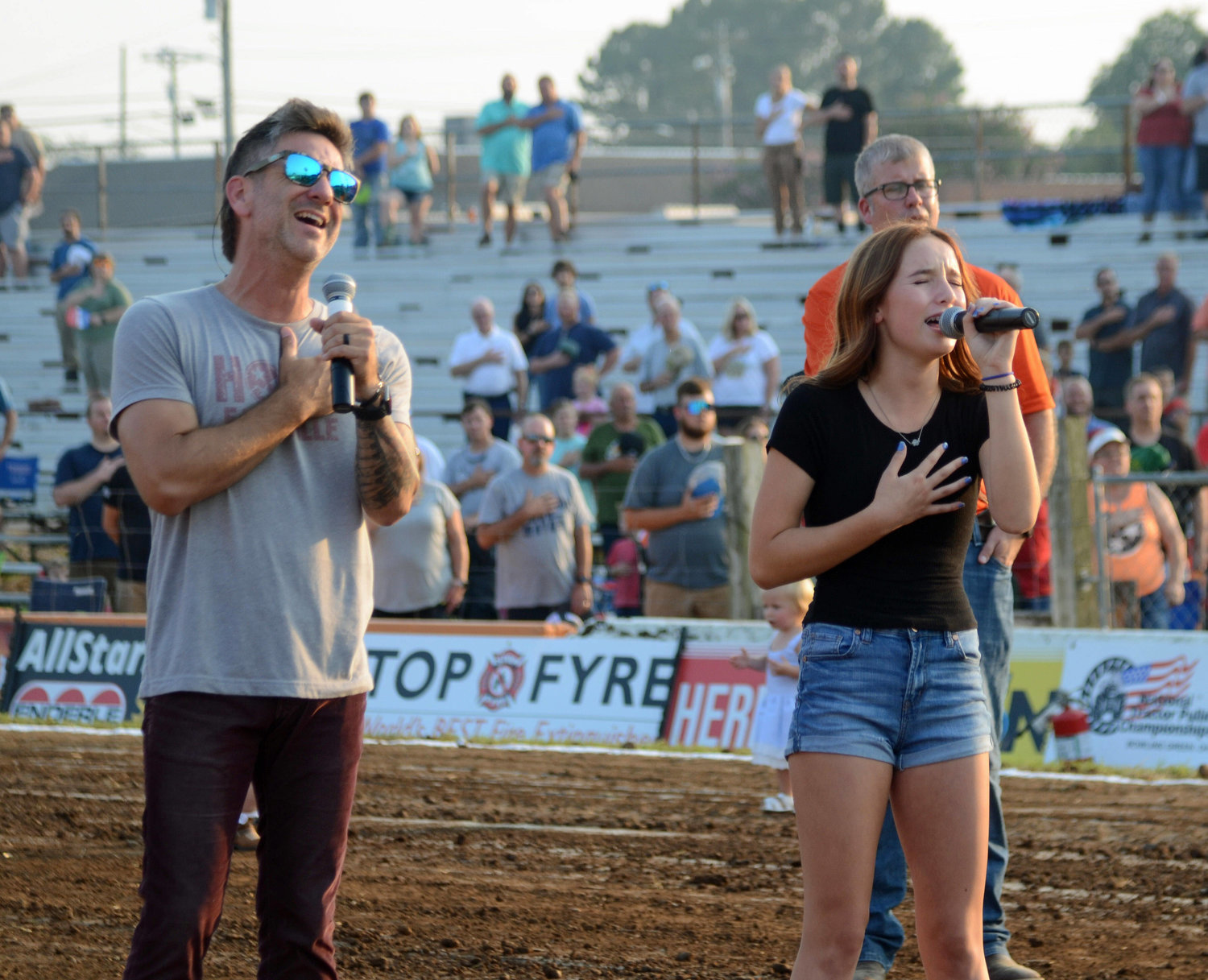 Craig Campbell and his daughter Preslee belt out the Star Spangled Banner before the start of Friday night?s opening session.
Tribune photo by Anthony S. Puca 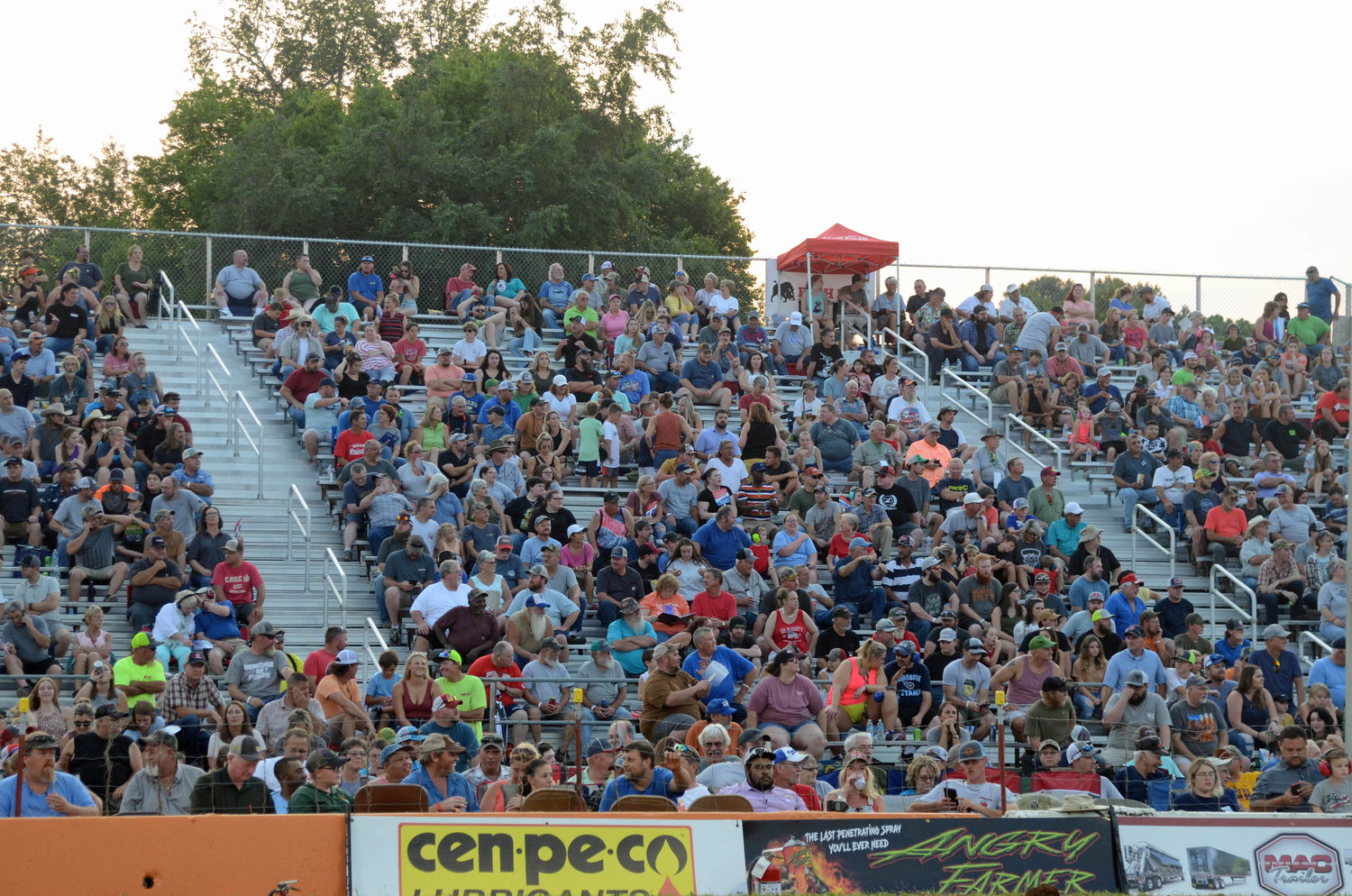 There was a solid crowd for Friday night?s opening session and a packed house on Saturday at the Lions Super Pull of the South in Chapel Hill.
Tribune photo by Anthony S. Puca 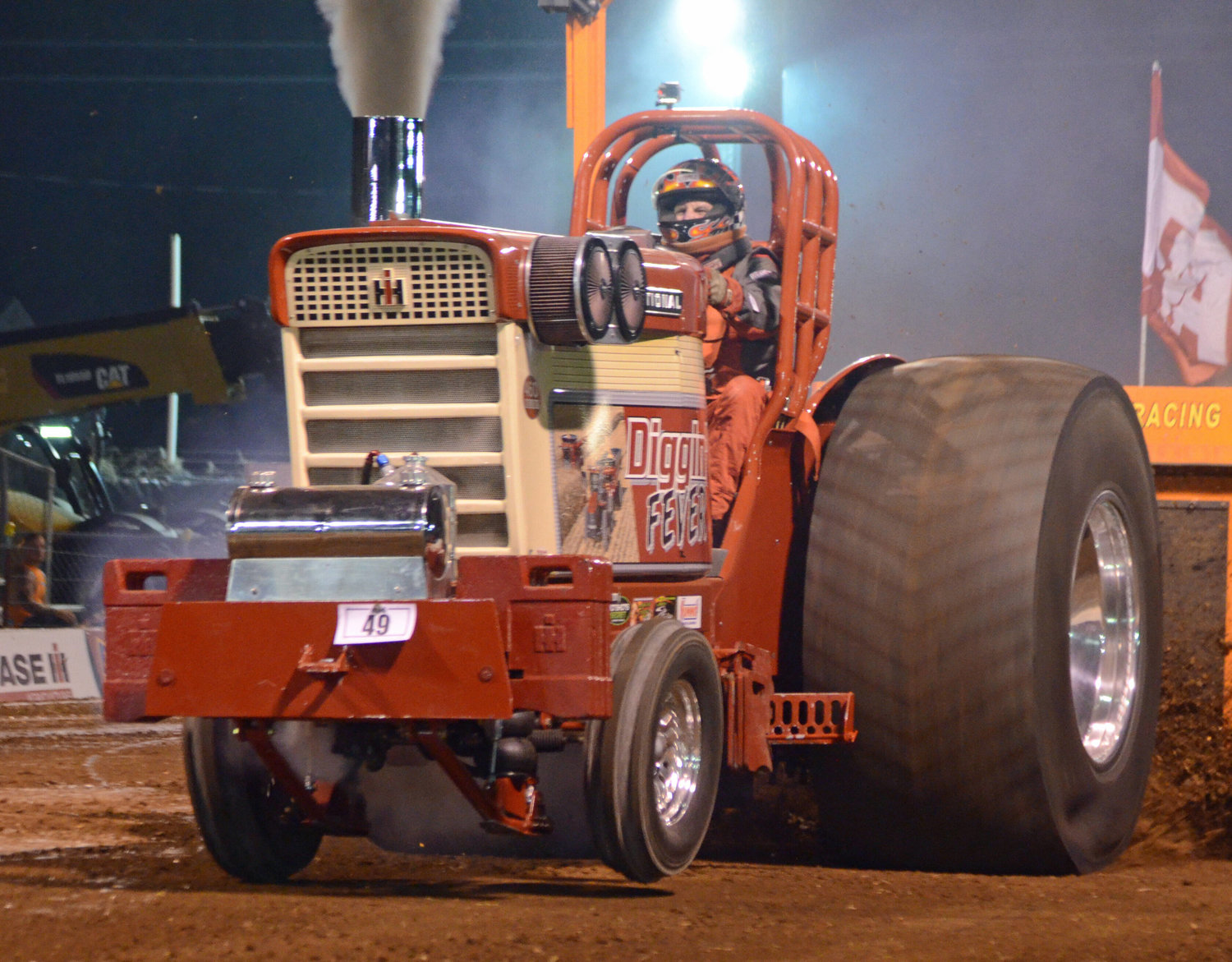 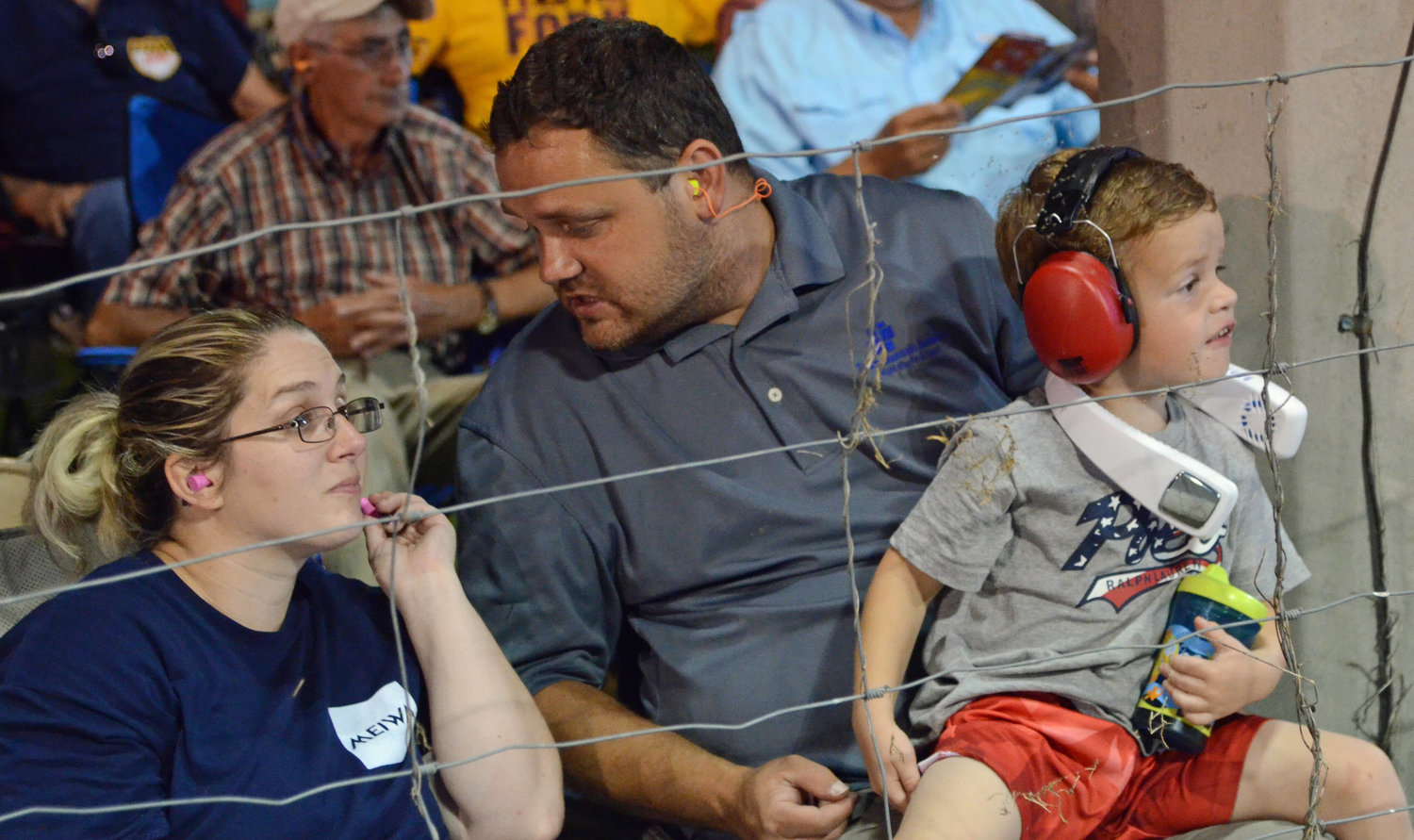 A young fan enjoying the show with his parents Friday night at Chapel Hill.
Tribune photo by Anthony S. Puca 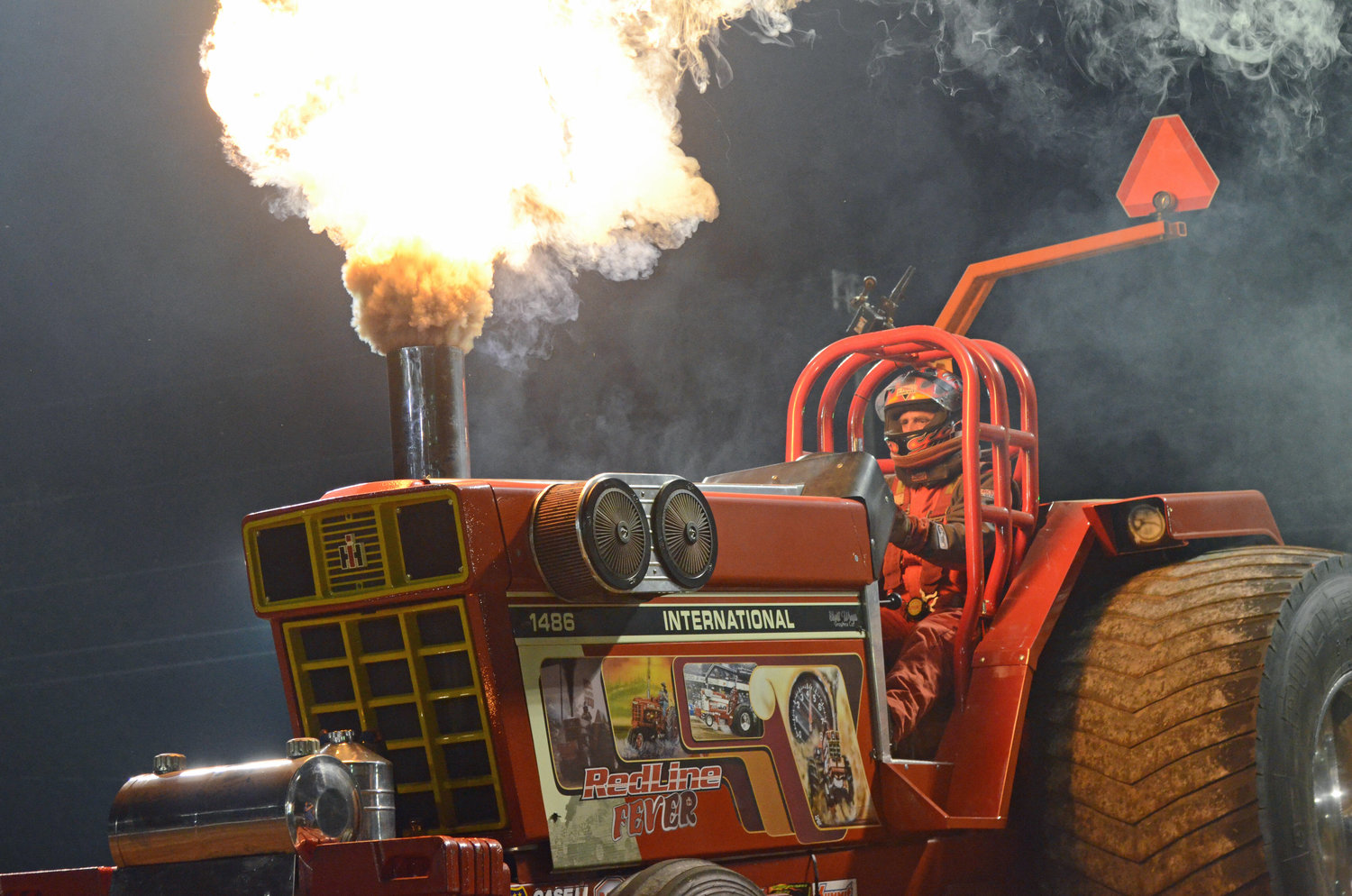 The 8,000 pound Unlimited Modified Tractor Red Line Fever gets some fire in the stack before taking off down the Lions Club Motorsports Park in Chapel Hill.
Tribune photo by Anthony S. Puca 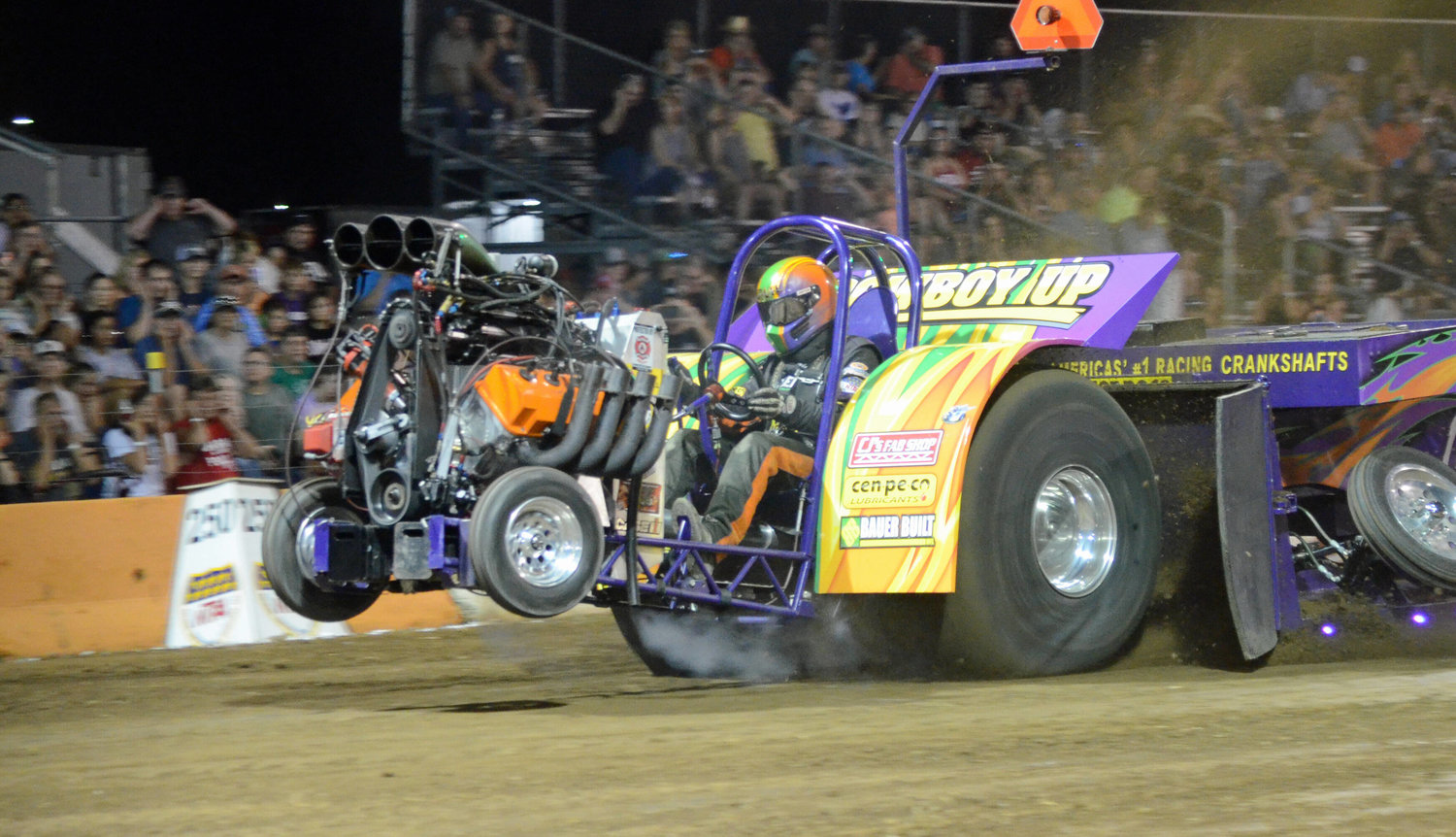 The Lions Club Super Pull of the South made a welcomed comeback with a solid crowd on Friday night, followed by a packed house on Saturday at the Lions Club Motorsports Park in Chapel Hill.

“The packed crows at Tomah (Wisconsin) a month ago gave us hope that the fans would be here,” longtime Lions Club member and photographer Bill Beasley said. “The crowd was super, possibly the best ever. We are very happy.”

In 2019, the Saturday night session was cancelled due to a summer gulley washer and the entire 2020 event was cancelled because of the Covid 19 pandemic, so fans from all over the country were as revved up as the pullers in anticipation of this year’s Super Pull.

“The Lions’ creed is "We Serve" and that we had not been able to do that as we had in the past was a bit of a burden to the club,” Beasley said. “The loss of a 2019 session to rain and Covid last year had us make adjustments in our budget that we didn't like.”

The loss Chris Gilbert in January was also very tough on the entire community and on the Lions Club as Gilbert was one of the bedrock founders of the Super Pull and served as tractor pull committee chairman and announcer for the last 44 years.

“I think the excitement of just having a pull helped carry us through,” Beasley said. “There were a lot of concerns, the biggest being our first pull without our leader”

“Trying not to miss any details because Chris did so much we may have not known about was a worry.”

Beasley, new committee Chairman Clint Bowman, Tim Tipps, and many other Lions Club members and volunteers stepped in the gap left by Gilbert and it came together, just as their lost leader and friend would have liked.

“I was driven by the hope that I could do my job just as well without Chris and I'm sure many others were as well. I think we were like so many children who don't want to disappoint their parents. It was very hard without him but I think he would be pleased.

On Saturday, Gilbert was honored with a memorial service at the track and the Lions Club also announced the always orange press box would be forever named The Chris Gilbert Memorial Announcers Booth.

“Chris would rebel if you mentioned putting anyone's name on anything,” Beasley said. “He'd say this is a community effort and no person is more important than any other.”

“We broke the rules and rightly so, he was MORE important than the rest of us.”

Gilbert’s children Jonathon and Tracey attended the memorial service, making a few remarks about their father before topping it off with the surprise announcement that Gilbert had left $250,000 to the Lions Club.

“The memorial service was tremendous,” Beasley said. “Roho was perfect, Greg Randall from the NTPA made a contribution and we were blessed to have Chris' children Jonathan and Tracey.”

“Sadly no one knows a fraction of what he did, whether it was being on a board, financial or anything else we just didn't know all the things and that's the way he wanted it,” Beasley added. “There's a giant hole in the community that will never be filled.”

There were no weather delays for either session as the fans had to endure some high temperatures, but nobody seemed to mind as they cheered on pullers from all the country, who vied for $100,000 in prize money.

The action on the track was intense and for the first time in several years, there were no double winners in any of the five same classes and no repeat winners from the one session of the 2019 Super Pull of the South.

“The pullers were great and we had a mix of multiple time winners and some new ones,” Beasley said. “The new parking lot was also big favorite and we showed the southern hospitality that we are famous for.”

“We have a target of three minutes per hook and although we can't always meet it the pullers love the speed and efficiency of Chapel Hill.”

Dayton Minnesota’s Esdon Lehn went to the starting first to open up Friday night’s session and turned in a real “super pull”, going 335.465 feet to the end of the track in his International 400 8,000-pound Super Stock Diesel Tractor.

Lehn’s distance in Diggin’ Fever held up for the entire class as Brandon Hunt in Liv’n a Dream finished second and Mike Beck in the High Tech Red Neck machine finished in third place.

The 8,000 pound Unlimited Modified Tractors were next up and veteran Chuck Knapp from Charles City, Iowa took first place in his Screamin’ D machine with a 344.375 foot pull.

In Saturday night’s 8,000 pound Super Stock Diesel Tractor Division, Hunt went from a second place finish on Friday night to the winner’s circle on Saturday as the Oak Grove, Kentucky resident guided his Liv’n a Dream to a 335.235 foot pull.

In the 10,000 pound Pro Stock Tractor Division, Russell also went from second to first as the Prescott, Iowa racer pulled his Work Horse Pro 329.010 feet for the victory.

Braden Shramek finished in second place (327.925) in his Young Blood tractor and Cope in his MAC Nasty finished in third place (326.115).

Bauer also came back from a second place finish on Friday night to win Saturday night’s 8,000 pound Unlimited Modified Tractors with a 324.675 foot pull in the Cross-Threaded machine, followed by Grayson Shelton in Ruckus (340.225) and Craig Corzine (321.695) in Money Pit.

Bauer pulled off the back-to-back wins as he finished in first place in the 2,050 pound Open Modified Mini Tractor, pulling his Cowboy Up machine 343.670 feet to edge out Tyler Slagh’s Have No Mercy tractor, which was just behind Bauer at 342.415 feet, while Veney finished in third place (340.620) for the second night in a row.

After the final run it was over, it was perfect and Gilbert was smiling down on everyone.

Thins will never be so quite normal again, but the Lions Club was well on the way to returning to its philanthropic mission of helping those in need.

“The cutbacks that we were forced to make may be a thing of the past with another good year or two,” Beasley said. “That is why we do this and we are known for being major contributors to Lions site conservation and the local schools as well.”

Next year will be the 45th edition of the Super Pull of the South and with the way things turned this year, look for an even bigger and better event in 2022.

“We have some catching up to do financially, but we made a big leap this year,” Beasley said. ‘They'll be minor tweaks next year I'm sure, but the Super Pull of the South will continue to thrill the crowds and provide to the Lions International and the local community just as it has for 45 years.”

Full results from both sessions can be found at https://ntpapull.com/results.