Titans are in panic mode after latest loss

It’s officially time to hit the panic button for the Tennessee Titans.

On Christmas Eve, the Titans saw the Houston Texans snap a nine-game skid in Nashville and the Titans’ grip on …

Titans are in panic mode after latest loss 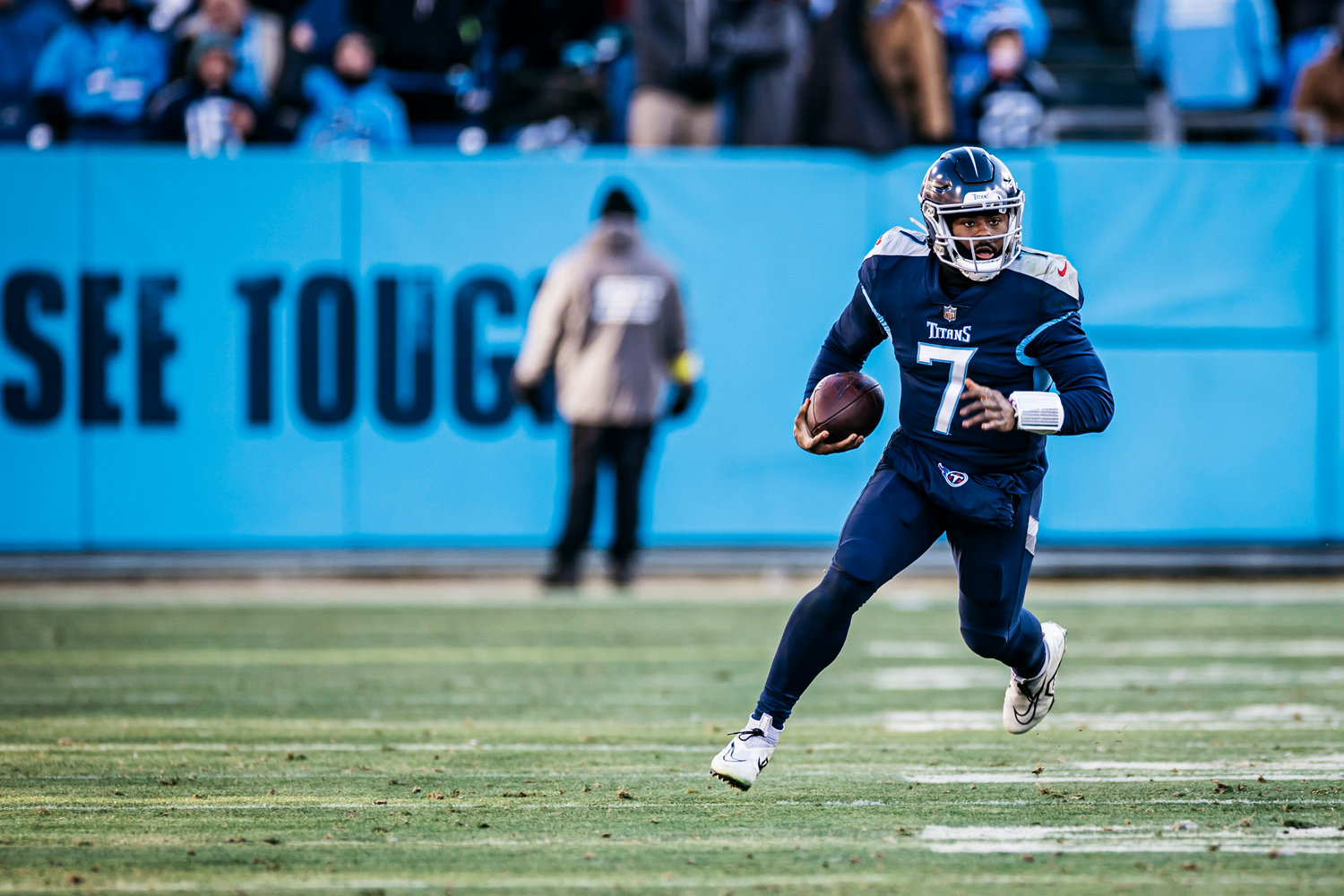 Malik Willis went 14-of-23 for 99 yards and two interceptions as the Titans’ starting quarterback on Saturday.
Photo courtesy of the Tennessee Titans
Posted Thursday, December 29, 2022 9:22 am
By Chris Siers ~ sports@t-g.com
It’s officially time to hit the panic button for the Tennessee Titans.
On Christmas Eve, the Titans saw the Houston Texans snap a nine-game skid in Nashville and the Titans’ grip on the AFC South lead slip away with the 19-14 Houston victory.
For years, the Titans have been reliant on a stellar defense and a top-tiered ground game.
The formula can only work for so long, though, when the Titans’ roster is as banged up as it is.
With Ryan Tannehill likely out for the season, it became Malik Willis’ show to run the offense.
If one thing is clear, it’s the Titans’ third-rounder is not ready to be an everyday NFL starter.
While the Titans’ offense hasn’t been a true gun-slinging, air out out system, Willis couldn’t even generate 100 passing yards against the Texans.
Willis went 14-of-23 for 99 yards and two interceptions.
The Titans’ receivers haven’t done a whole lot for Tannehill as it is, but the passing game was blatantly non-existent on Saturday.
Henry turned out his typical 126 yard day with a touchdown, but if anything has been learned over the last five games, he can’t do it by himself.
Plenty of fans have been calling for Todd Downing’s job all season, and for good reason.
The Titans rank 27th in the NFL with 17.9 points per game, with only Tampa Bay, Pittsburgh, Indianapolis, Houston and Denver being worse.
At this point, the Titans are limping to the finish line with injuries across the board, including Tannehill, Dylan Cole, Amani Hooker and Kristian Fulton.
And the Titans’ schedule isn’t any easier in the last two weeks either, with Dallas up next on a short week for Thursday Night Football, and the season finale at now-AFC South leading Jacksonville.
With the Titans’ loss on Saturday, all eyes are now turned to the finale against Jacksonville, which will decide the AFC South champion.
The Jags certainly have been playing better as of late, winning four of their last five games and averaging over 30 points per game in each of those four wins.
So what happens if the Titans lose their last two games?
Where should the front office go from here?
In a loaded AFC, featuring the likes of Josh Allen, Patrick Mahomes, Joe Burrow and Justin Herbert, it begs the question as to what direction the Titans should be heading.
When John Robinson was fired earlier this month, it became clear the Titans’ ownership wants to head another direction.
It should also be asked if it’s time to blow up the Titans’ roster and start rebuilding.
Tannehill isn’t the quarterback to compete against the top gunslingers of the NFL and with the number of injuries across the board, it may be time for the ownership and new general manager, whenever they are hired, to start shipping off key pieces from the Robinson era and start rebuilding from scratch, at least on the offensive side of the ball, because the status quo hasn’t been producing, and with a quick glance at the schedule, it’s not looking like much can change over the last two weeks of the season.
Chris Siers is sports editor of the Tribune. Email him at sports@t-g.com.