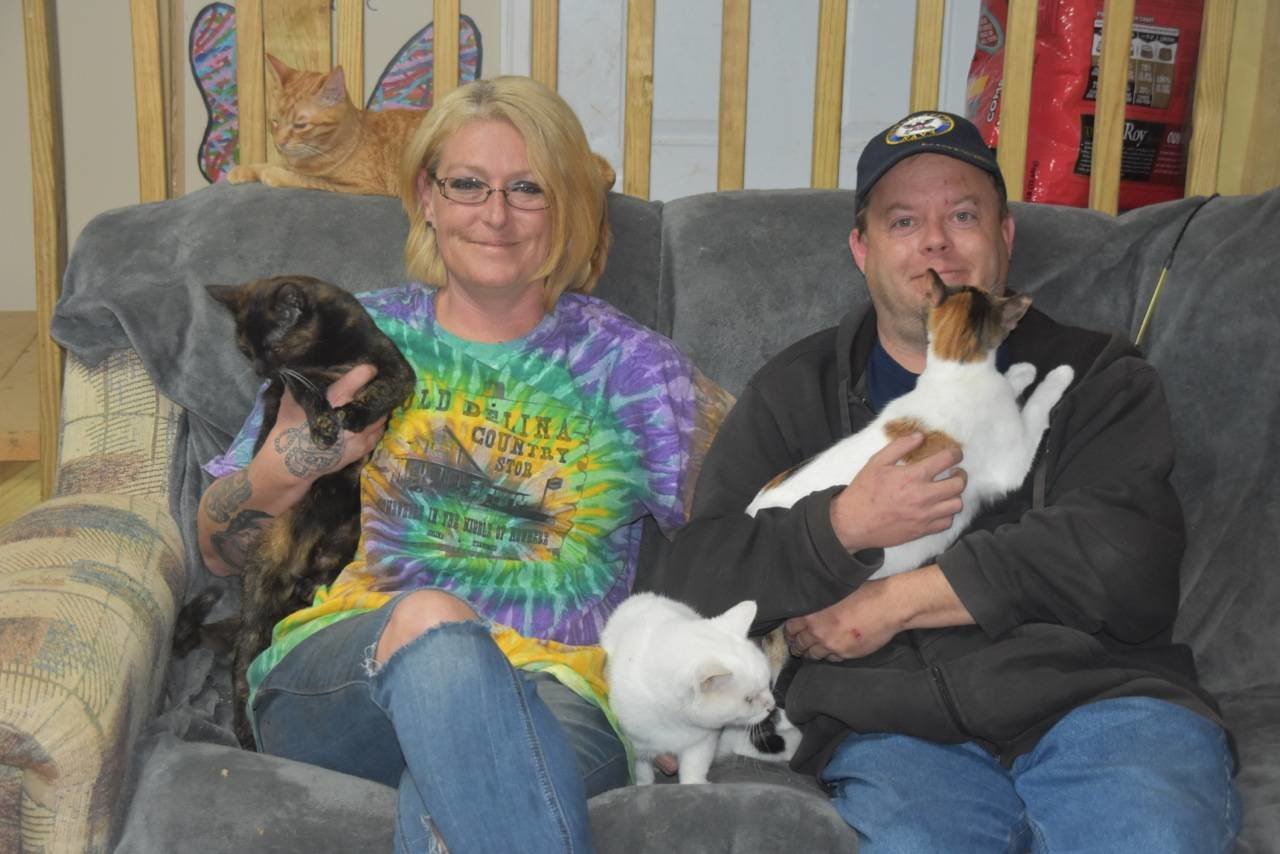 “I’m proud of that title,” Jaclyn said. “I’ve loved cats as long as I can remember.”

Now, Jaclyn is taking her love of cats to a new level. She’s opening Lucky’s Cat House in Delina where she helps her father run the Old Delina Country Store.

The cat house, which is currently under construction, will house approximately 10-20 cats at any one time. Payne has gathered up a group of like-minded people to create a non-profit, too. The goal for the non-profit is to serve as an adoption organization to fill a local need.

“People have no place to go if they want to adopt a cat that has been vetted and assessed,” said Payne. “We want to be that place.”

Currently the Lewisburg Animal Shelter does not accept cats, says Brandy Cox, a volunteer at the shelter. “We get calls all the time and it helps to have rescue and adoption organizations for referrals.”

Payne says her first rescue cat was named Lucky, when she lived in Texas and was working as a vet tech for the humane association. Hence the name of her new venture. She refers to her new physical site as a cat house, instead of a cattery, because she says a cattery usually refers to a breeding enterprise.

Payne started volunteering locally and one day just decided that she had the ability to offer something that wasn’t being addressed, that of cat adoption.

“I was thinking of doing it and then one day there were three kittens just sitting in the road and I thought it was a sign of some sort,” said Payne.

Where do the cats come from home?

“Every place imaginable,” said Payne. “ We get referrals and then people just find us to tell us about a colony out of control or a stray or a wounded kitty on the side of the road.”

Payne says the Old Delina Country Store, that she runs with her father, is often a “dumping ground” for cats, too.

To help improve collaboration among area rescue groups, Payne and her right hand man, Phil Randall, have taken advantage of an innovative computer program that gives access to all rescue groups to track reports of colonies. A person who is taking care of barn cats or colonies can also sign in as a caretaker and report. The program can keep track of the cats that have been spayed and neutered and released back to their home.

“Some people want the cats moved and some people just need help controlling the barn cats or colonies,” said Randall.

The database, called Pawtastic Tri-County Tracking, helps local groups use their time more efficiently because it provides a county overview for everyone to see, said Phil Randall, board member and operations manager. “We really want to help avoid overlapping efforts.”

The database will also help when it comes to applying for grants because the need is well documented.

Payne and her board currently use word of mouth, other rescue groups and websites like Petfinder and Adoptapet to showcase cats at the Cat House. It seems to be working, said Payne. Recently they adopted a cat to a lady from New Jersey who flew to Nashville to pick up her buff tabby kitten.

“We do charge an adoption fee but that covers all the vetting and vaccinations,” she said. “We’ll never make a lot of money but then, I don’t know many people making a living at cat rescue.”

Payne, and Randall, say they are getting better at saying “no” because they’ve learned that they have to stay at a manageable level.

“If we can’t take a cat, at least we can refer people to other resources,” said Randall. “We know that dogs tend to get most of the attention and cats end up at the bottom of the list and we don’t want to accept that. We want to work with like-minded partners to take care of the cat community in the county.”

The non-profit is also working on increasing its “trap, neuter and release” program. The cats are either released where they were found or released with the permission of others that have barns.”

The world of rescue is labor intensive and vetting is expensive. It’s also really emotional, said Payne. She gets seriously attached to cats. She can tell you the story of every cat she’s ever rescued. Letting them go, however, is not as hard now that they have a good process in place for evaluating adopters, she said.

“We want to get it right the first time,” said Payne. “But if something go wrong, we’ll take the cat back.”

Randall said he thinks education is the key to improving the cat situation in the county. He says the non-profit board is looking at ways to get the word out so it will be common knowledge that there are people available to help re-home a cat or relocate a colony.

“I do know we can’t save them all,” said Payne, “but we can do something.”

Cat House board members Jaclyn Payne and Phil Randall spend some quality time with a few of the cats making their home at Lucky’s Cat House in Delina.