The Marshall County Commission filled a vacancy on Monday night butwere forced to leave another vacant. 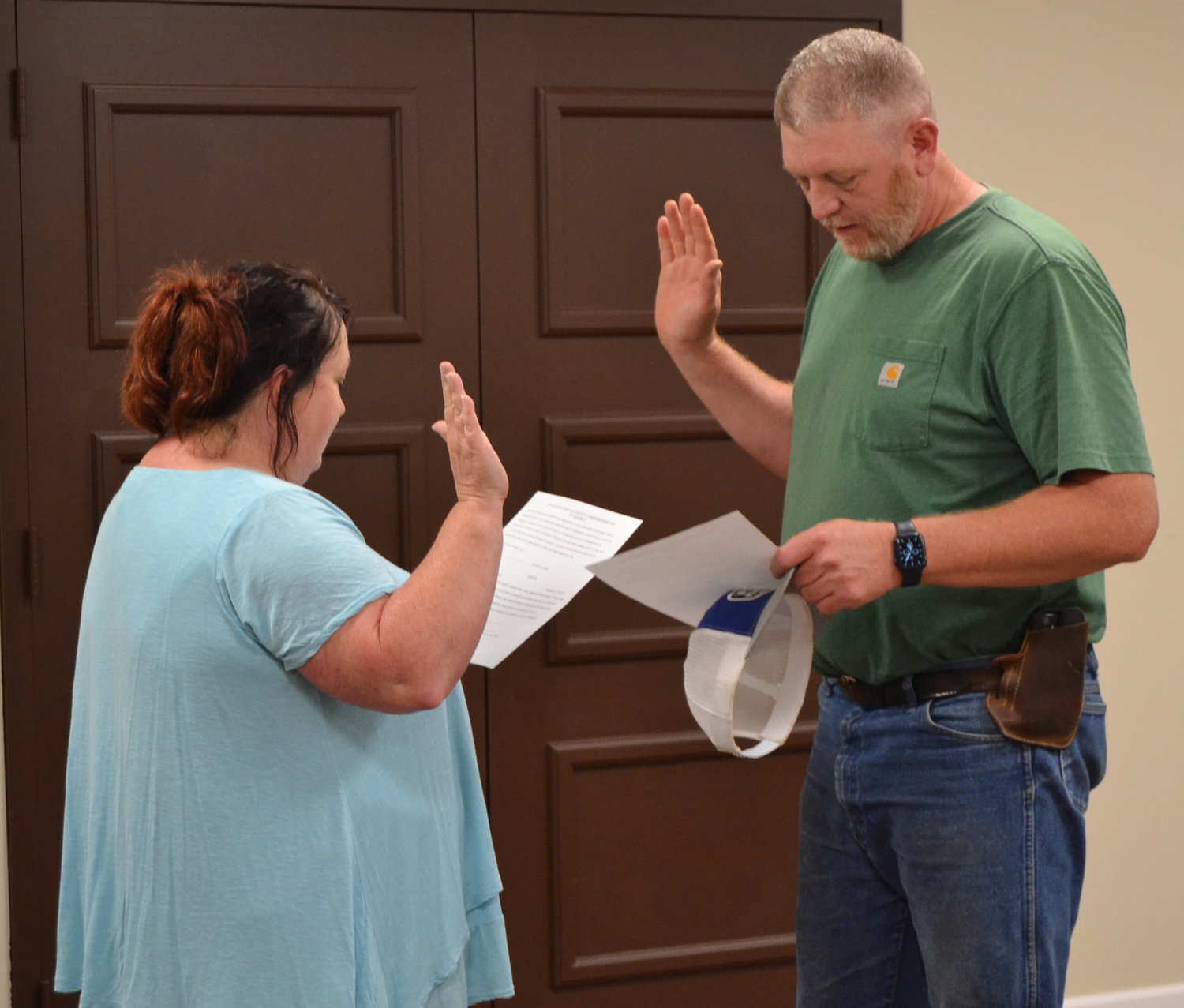 Marshall County Clerk Daphne Girts delivers the oath of office to James Hopkins, who was appointed by the commission to the vacant 8th District seat on Monday night.
Tribune photo by Scott Pearson
Posted Thursday, May 26, 2022 3:26 pm
By Scott Pearson Associate Editor

The Marshall County Commission filled a vacancy on Monday night butwere forced to leave another vacant.

Commissioners filled the 8th District seat vacated by the move out of district by Vincent Cuevas.

The commission appointed James Hopkins to fill the unexpired term until August 31.

Hopkins has also filed as a candidate for the 8th District in the upcoming August 4 county general election, along with sitting commissioners Jeff Poarch and Lynn Stocstill and challenger Joey King.

Hopkins was the sole resident to express interest in being appointed to the seat.

The commission did not fill the vacant 8th District seat on the Marshall County Board of Education.

Mayor Mike Keny noted that no one had filed a letter of interest in the seat with his office nor had anyone attended the commission meeting to be nominated from the floor.

Keny asked County Attorney Barbara Medley to determine the commission’s course of action to fill the seat in light of a lack of interest.

A similarly vacated School Board seat also garnered no interest and the commission was forced to reappoint the member who had initially stepped down.

Commissioners voted to suspend the rules to allow consideration of three resolutions not included in the initial agenda.

Commissioners approved a resolution allowing for the Marshall County Board of Public Utilities to issue a one-time bonus for employees, similar to the American Recovery Plan funded bonus approved for county employees in March.

The request generated discussion of why BPU employees didn’t receive the first bonus and were they considered county employees.

It was clarified that, while the county had ultimate oversight of the utility, it was a separate entity and that any bonus funds would come from the BPU budget, not the county general fund.

Also approved was a resolution based on new ARPA guidelines which would allow transfer of some ARPA funds into the county’s general fund to replace estimated revenue shortfalls due to the COVID pandemic.

The funds still have some restrictions and could not be used for recurring budget items.

The commission approved, for the third time Keny said, the final release of funds to finish the new County Health Department building.

The facility is currently open with a ribbon cutting and open house scheduled for June 2.

A commission budget work shop and the annual public hearing on the proposed budget for the coming fiscal year will be held in June.

An outline of the proposed budget is published on Page A7 in today’s Tribune.

School Board honors Teachers of the Year