After a solid 5-2 start to the season, the Forrest Rockets have lost six out of their last eight games, including a 56-44 loss to Community in the District 7-AA opener Friday night at Chapel … 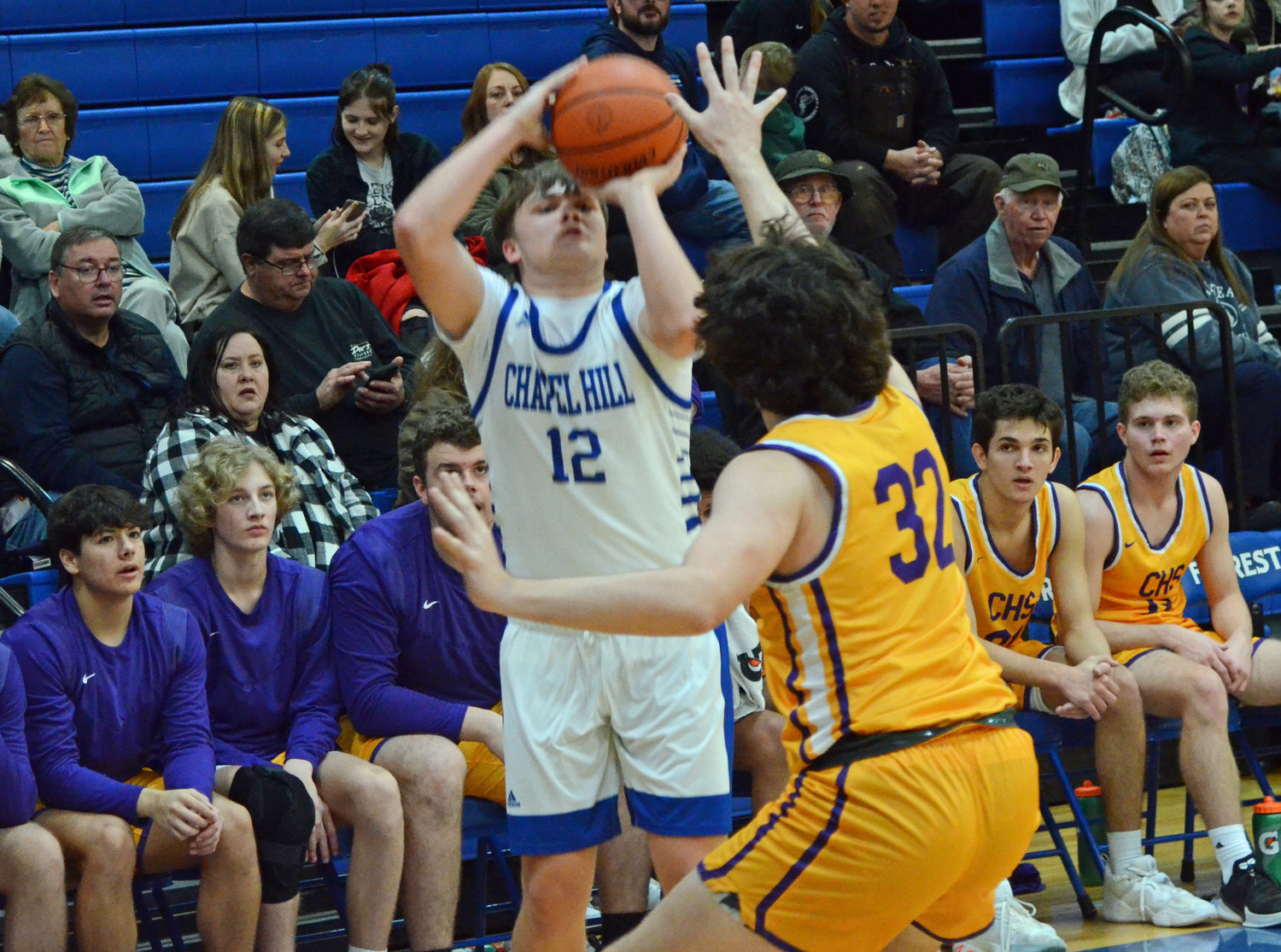 Forrest’s Brennan Mealer (12) nails one of his four 3-pointers in the game for the Rockets, who fell 56-44 to the Community Vikings in Friday night’s District 7-AA opener at Chapel Hill.
Tribune photos by Anthony S. Puca 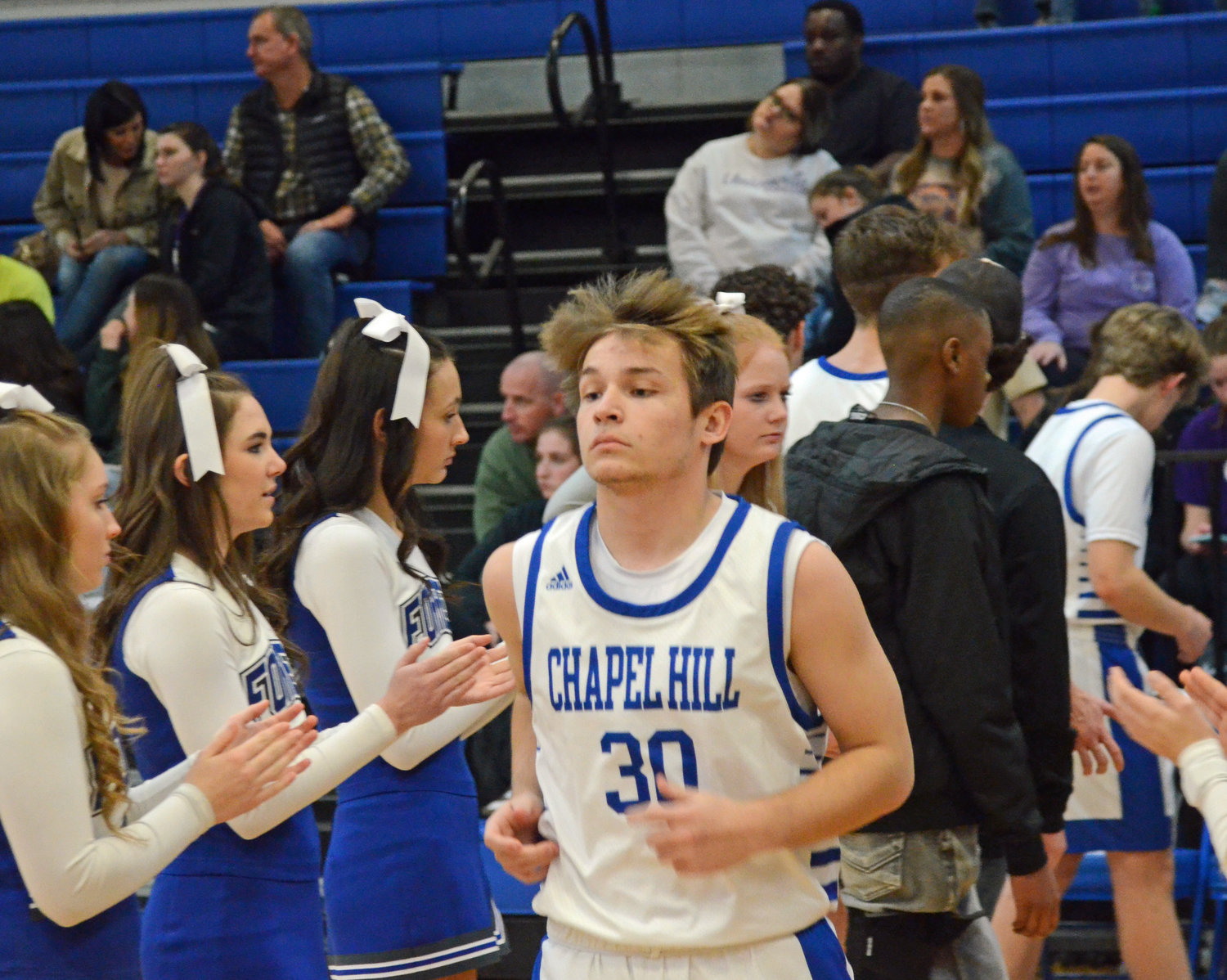 Senior Andrew Timmons, who scored seven points versus the Vikings, runs out for the Rockets. 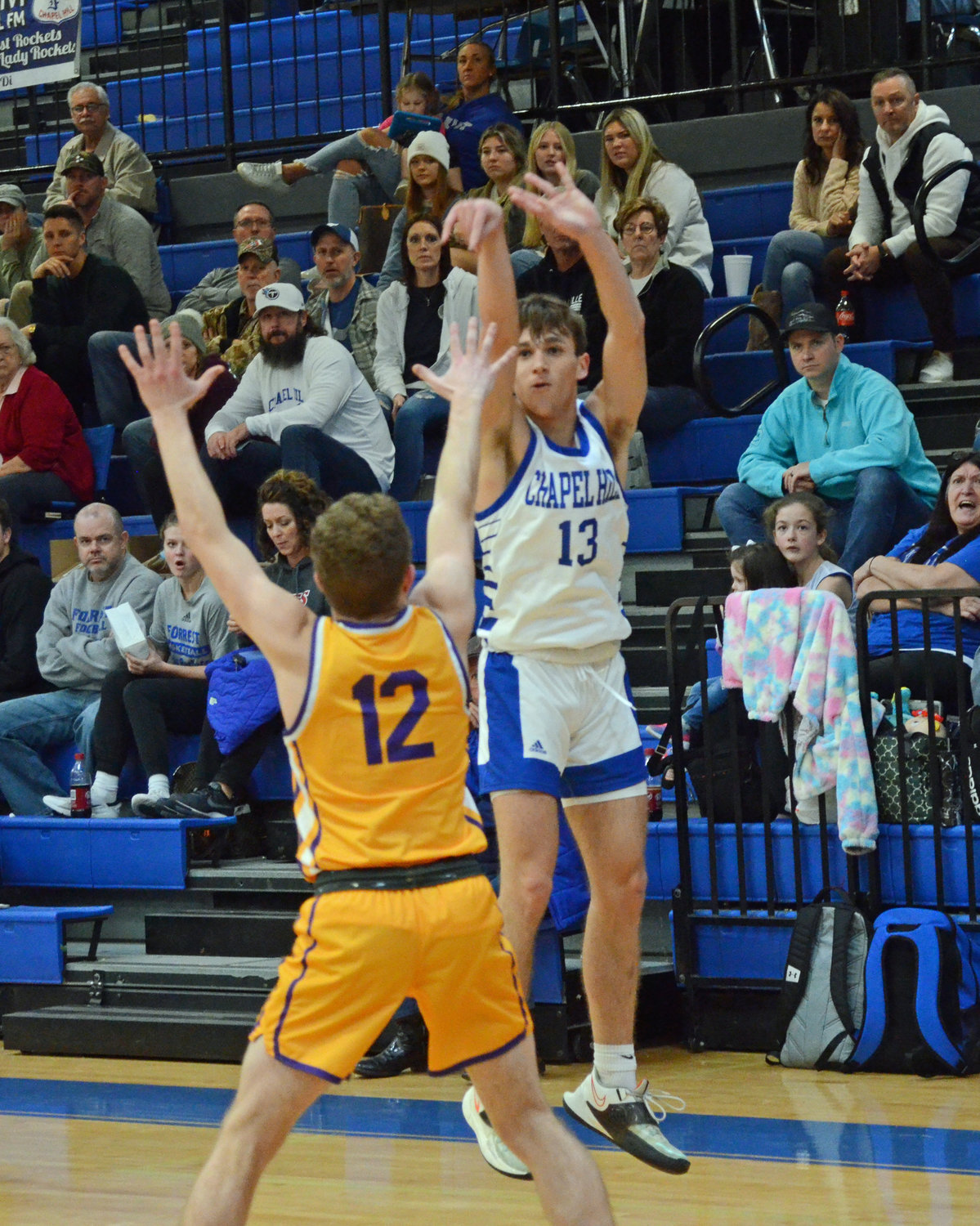 “That’s only one district game and we’ll see them again soon and hopefully we will be prepared to end that streak.””
Forrest coach Shane Chapman
By Anthony S. Puca Sports Writer

After a solid 5-2 start to the season, the Forrest Rockets have lost six out of their last eight games, including a 56-44 loss to Community in the District 7-AA opener Friday night at Chapel Hill.

“Community is a good team and has some good players and they finished plays,” Forrest coach Shane Chapman said. “We had a couple of mental breakdowns that had to be addressed in the game from some of our leaders of this team and we will keep grinding and get ourselves back on track.”

“That’s only one district game and we’ll see them again soon and hopefully we will be prepared to end that streak.”

“We didn’t play great, didn’t shoot it good at all, but still were in the game, but in the end we just didn’t make shots… also a couple of mental breakdowns hurt us and fueled Community,” Forrest coach Shane Chapman said.

Community’s Stratton Lovorn, who led all scorers in the contest with 21 points, scored to open the game before an Andrew Timmons 3-pointer gave Forrest a 3-2 lead.

The Rockets never led again in the game, but had plenty of chances to overtake the Vikings.

Community’s biggest lead in the first quarter was six points at 14-8 late until a Brennan Mealer 3-pointer made it 14-11 at the end of the stanza.

Mealer had four 3-pointers and led the Rockets in the scoring column with 13 points.

Two more Mealer long bombs kept Forrest in the game in the second quarter, trailing 20-19 midway through the period.

“Brennan kept us in it with the long ball… he can get it going for us and give us a big push,” Chapman said. “We are really glad he’s on our team. We’ve been working on his game being more versatile and he played well tonight.”

The Vikings went on to lead by eight points, but once again Forrest cut in to the deficit late on one Mealer free throw and a Bray McCown 3-pointer that made it 29-25 at the half.

Mealer drilled a 3-pointer to start the third period and moments later, Hunter Bennett tied the game at 31-31 from the free line.

Maki Fleming followed with a basket for the Vikings and after a Forrest turnover, Stratton took over.

The Community senior went on a one-man wrecking crew mission from downtown, knocking down back-to-back-to-back 3-pointers as the Vikings opened up a 10-point lead at 41-31.

Davin Porter came up with a rare layup for the Rockets before Lovorn drilled another rainbow from the top of the key to give the Vikings a 44-33 lead, entering the fourth quarter.

Bennett kept the Rockets in the game as the Forrest senior scored the next five points to cut the Community lead to 44-38, but the Vikings won the remainder of the fourth period, outscoring Chapel Hill 12-4 the rest of the way to secure the 12-point win.

“The guys played hard and I haven’t questioned that, we just didn’t make shots inside like we normally do,” Chapman said. “I’m super proud of this bunch and what they’ve accomplished this far (they’ve not won seven games in a few years) but we are not done by a long shot. We are a hungry team that wants to win and we are working hard every chance we get in the gym to get better and appreciate all the help and support we can get.”