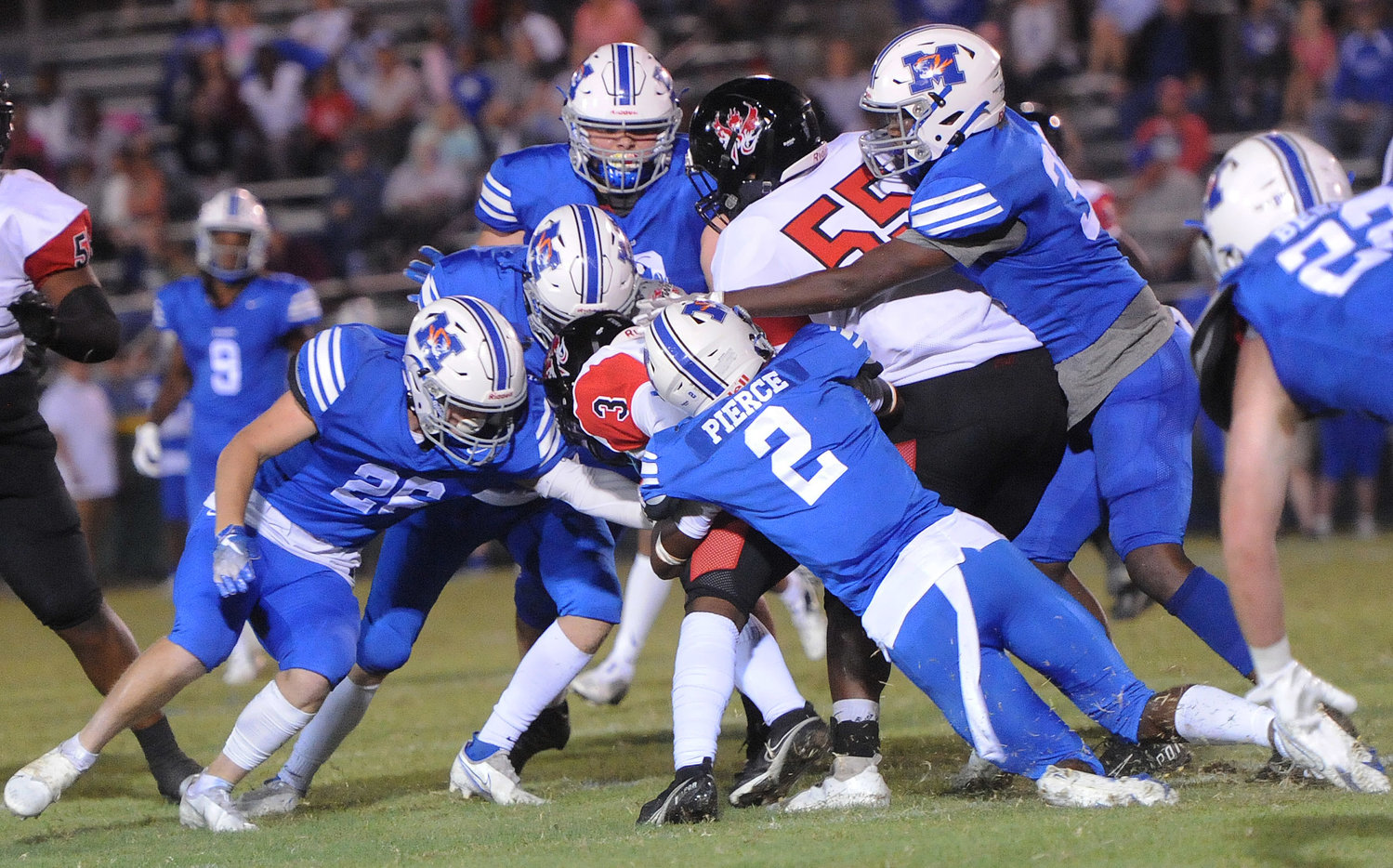 The Tiger defense converges to make a stop at the line of scrimmage.
Tribune Photo by Chris Siers 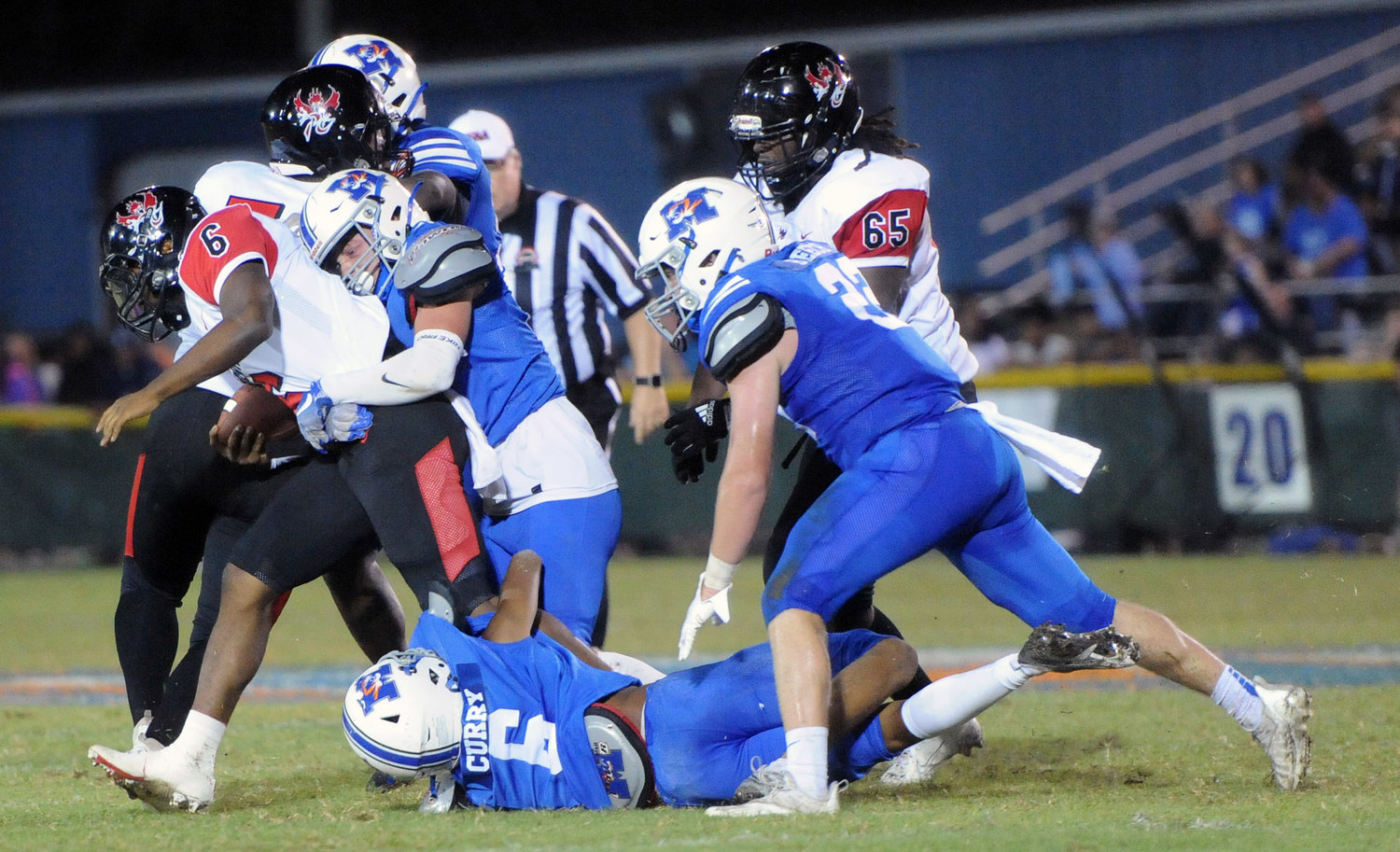 Grayson Miller leads a host of Tigers to combine to stop a Pearl-Cohn ball carrier.
Tribune Photo by Chris Siers 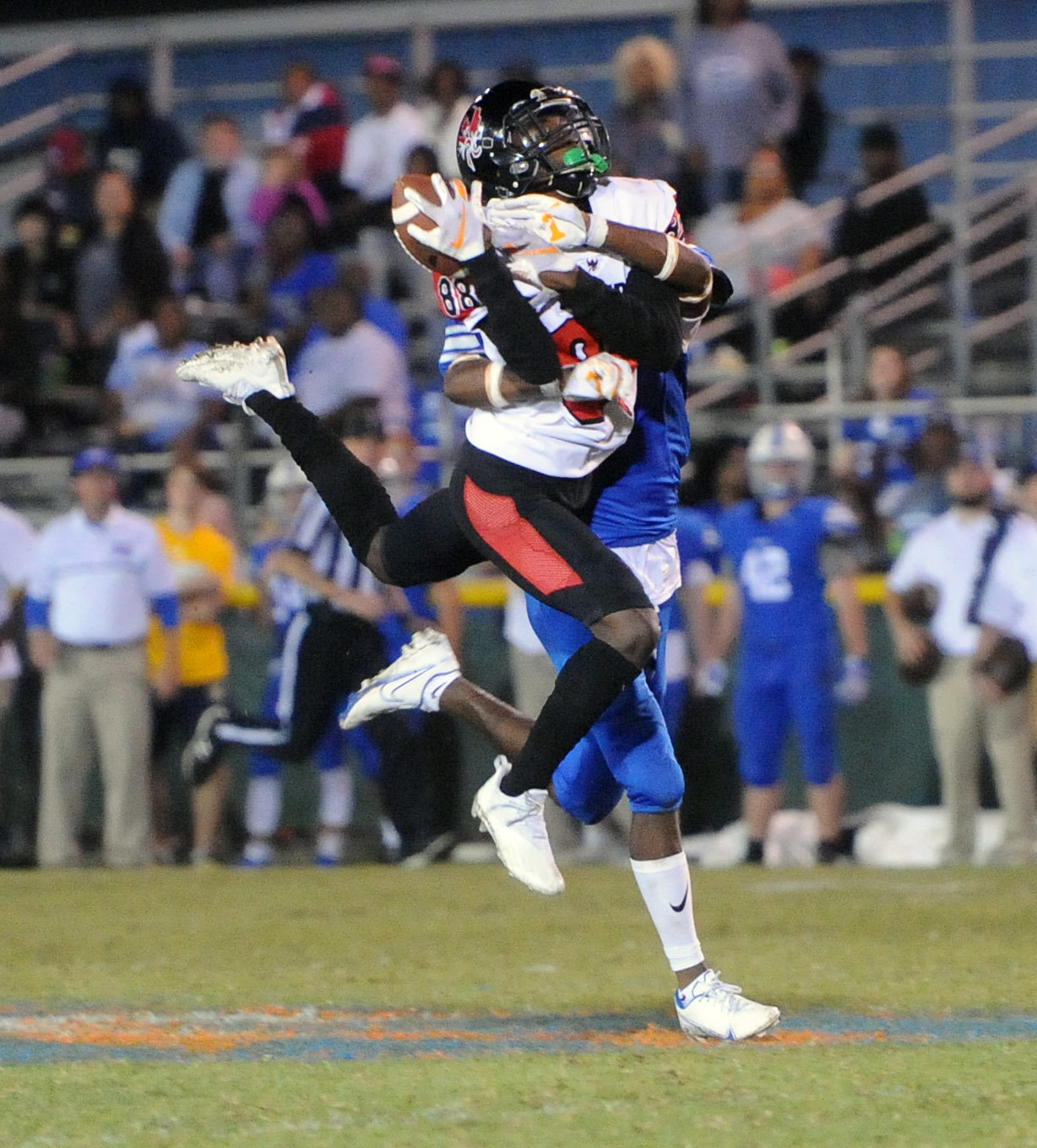 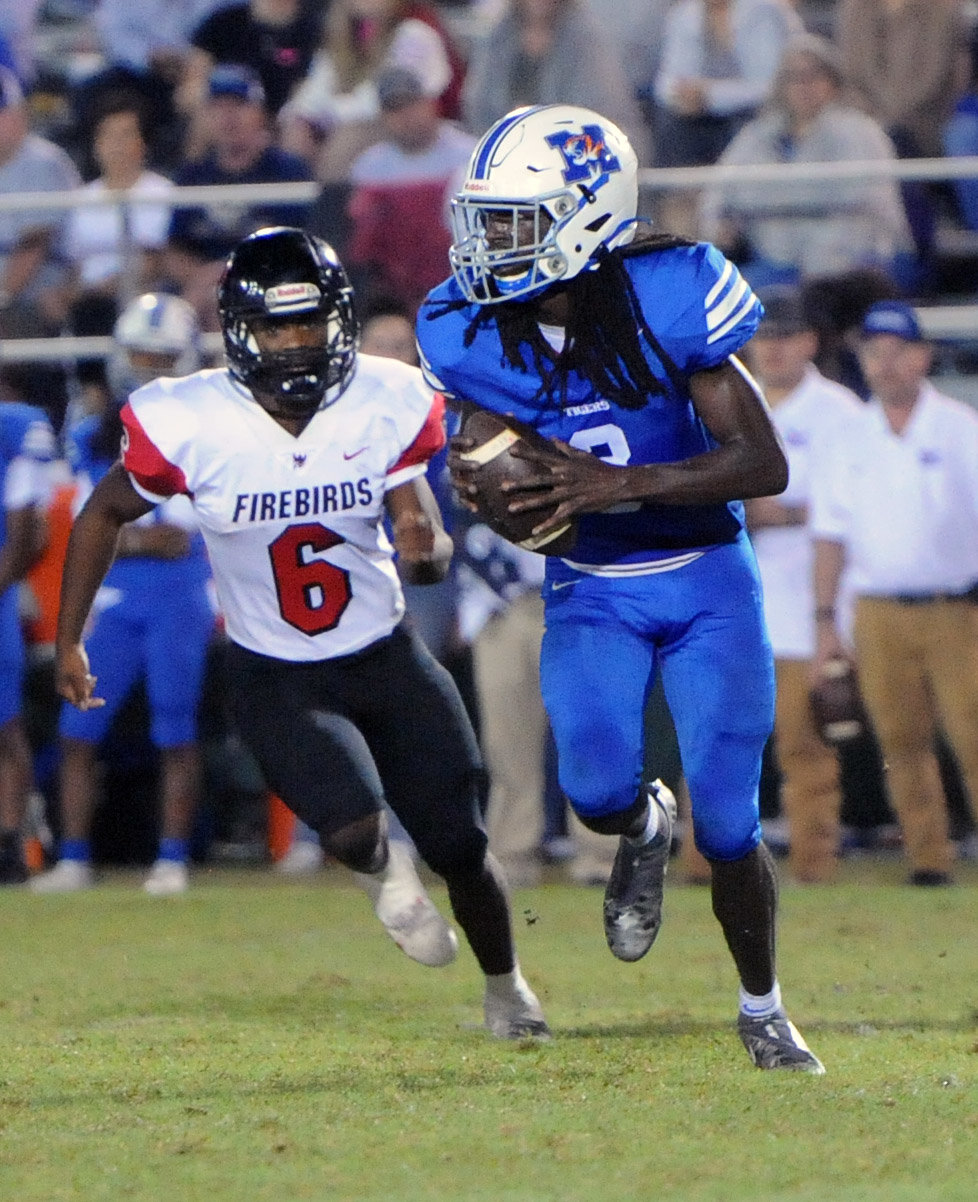 LEWISBURG — Marshall County’s Region 5-AAAA matchup on Friday night against Pearl-Cohn saw a perfect storm develop in the first quarter that set up a huge win by the Firebirds.Pearl-Cohn (7-1, 4-1) was able to exercise its offense at will and claimed the 37-15 win over Marshall County.With a swarming defense and a lightning fast offense, the Firebirds got just the start they wanted, forcing a three and out for the Tigers on the first possession of the game.Pearl-Cohn needed just 20 seconds to go 63 yards and find its first score of the night off a 31-yard strike by Malachi Cromwell. After forcing a punt on the following Marshall County (5-2, 3-2) possession, the Firebirds showcased the ability to methodically drive and utilize the ability to run the clock.The Firebirds'a  drive spanned nearly seven minutes and went 85 yards before Barion Brown capped the drive on a seven-yard score to bump the Pearl-Cohn advantage to 13-0, following a missed extra point that hit the left upright. While the visitors saw the first quarter as a chance to jump on the Tigers and seize the momentum early on, the second quarter saw both teams come up with key defensive plays that saw only three points scored on a field goal by Pearl-Cohn with 3:55 left in the half.With the Tigers on the march early in the quarter, Pearl-Cohn came up with an interception on a deep pass by Marshall County quarterback Devonte Davis that set the Firebirds up with a first down on their own 13-yard line.Firebird quarterback Keshawn Tarleton fired off a 50-yard bomb to D’Arious Reed to flip the field position.But the Tigers’ defense bowed up and forced a turnover on downs on the Marshall County 37-yard line, seemingly seizing the momentum.Trailing 13-0, the Tigers mobilized the offense and on the drive, was able to find a steady mix of passes by Davis, which included pass completions of 15 and 23 yards to Jayden Hart and Trice Gordon.After pressing into the Firebird red zone, Pearl-Cohn again came through with a defensive stop on an interception by Keshawn Johnson in the end zone and returned the ball to the Tigers’ 18-yard line.Four plays later, it was Marshall County that came through with an interception in the end zone, courtesy of Lamarion Pierce.Having turned the ball over twice and allowed no points off the interceptions, the Tigers again mobilized the offense with a pair of gains by Demari Braden and pass completions by Davis.Having pressed to the Pearl-Cohn 42-yard line, the Firebird defense broke into the backfield and forced a fumble for the third Marshall County turnover of the quarter.This time, the Firebirds were able to put points on the board off the turnover and Kamil Tanas drilled a 29-yard field goal to carry a 16-0 lead to the half. Through the first half, the Pearl-Cohn defense allowed just 87 total yards. The Firebirds picked up in the third quarter where they left off in the first half with a pair of scores that included a 35-yard touchdown run by Cromwell and a nine-yard touchdown pass from Tarleton to D’Arious Reed, giving the visitors a 30-0 lead late in the third quarter.The Tigers finally caught a spark after Cromwell’s score when Pierce took the ensuing kickoff return 99-yards down the right flank to the end zone to put Marshall County on the board.The Tigers’ two-point attempt after, however, came up short, leaving Marshall County on the tail end of a 30-6 score. Pearl-Cohn found the end zone one more time against Marshall County, coming via a 59-yard pass on the Tarleton-Brown connection with 10 minutes left in regulation.Marshall County answered with two more scores, including a safety with six minutes left and a Demari Braden eight-yard run with five minutes left.Wyatt Joyce made good on his only extra point attempt of the game for the final margin.The Tigers managed 204 yards of offense against a stingy Firebird defense, with just 78 coming via the pass game.Davis connected on 5-of-17 attempts for 78 yards with three interceptions. He carried the ball nine times for 26 yards as well.Braden was the top gainer on the ground, with 14 carries for 65 yards and a touchdown. The loss is just the second of the season and despite falling to Pearl-Cohn and Tullahoma, the Tigers are very much in the playoff hunt in the nine-team region.The Tigers still have three games left on the schedule, including winless Glencliff, Montgomery Central (7-1) and Greenbrier (3-4). The Tigers’ final home game of the season will be Friday night at home against Glencliff before trips to Montgomery Central and Greenbrier to close out the regular season. Kickoff is set for 7 p.m. at Preston Hopkins Field. Pearl-Cohn              13    3  14   7 — 37Marshall Co.              0    0    6   9 — 15First Quarter PC — Malachi Cromwell 31 run, (Kamil Tanas kick), 10:11.PC — Barion Brown 7 run, (kick failed),: 37.Second Quarter PC — Tanas 29 field goal, 3:55. Third Quarter PC — Keshawn Tarleton 9 pass to D’Arious Reed,(Tanas kick), 3:35. PC — Cromwell 35 run, (Tanas kick), 1:00.MC — Lamarion Pierce 99 kickoff return, (2pt conversion failed). :45. Fourth Quarter PC — Brown 59 pass from Tarleton, (Tanas kick), 10:00.MC — Safety, 6:00.MC — Demari Braden 8 run, (Wyatt Joyce kick), 5:00.

Plenty to be thankful for this year