Bulldogs held in check at McKenzie as season ends

McKENZIE — All season long, Cornersville (9-3) has relied on a potent run offense that has allowed the Bulldogs to forge their way to a second-round Class 1A playoff berth.

Bulldogs held in check at McKenzie as season ends 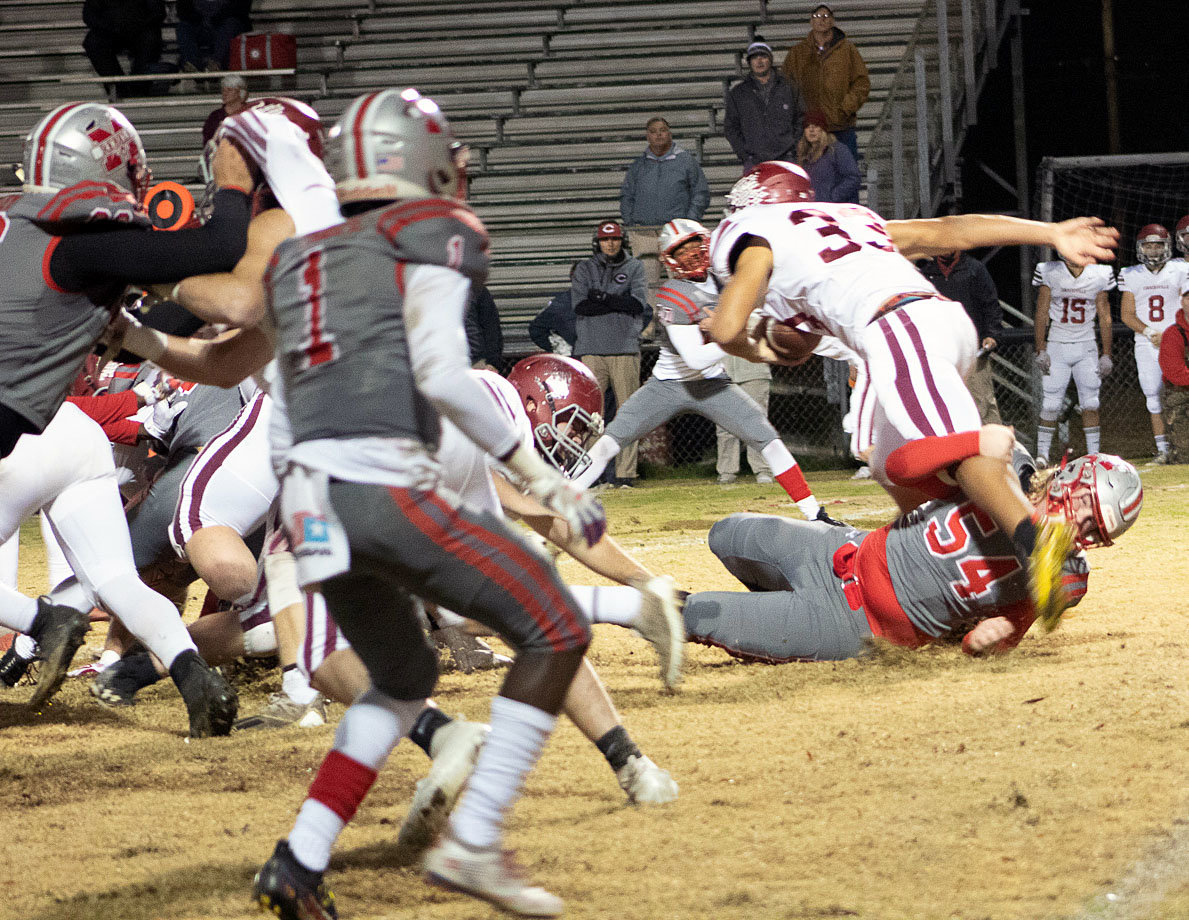 Ben Franklin tries to escape a McKenzie defender and stumbles forward for a short gain.
Photo courtesy of the McKenzie Banner 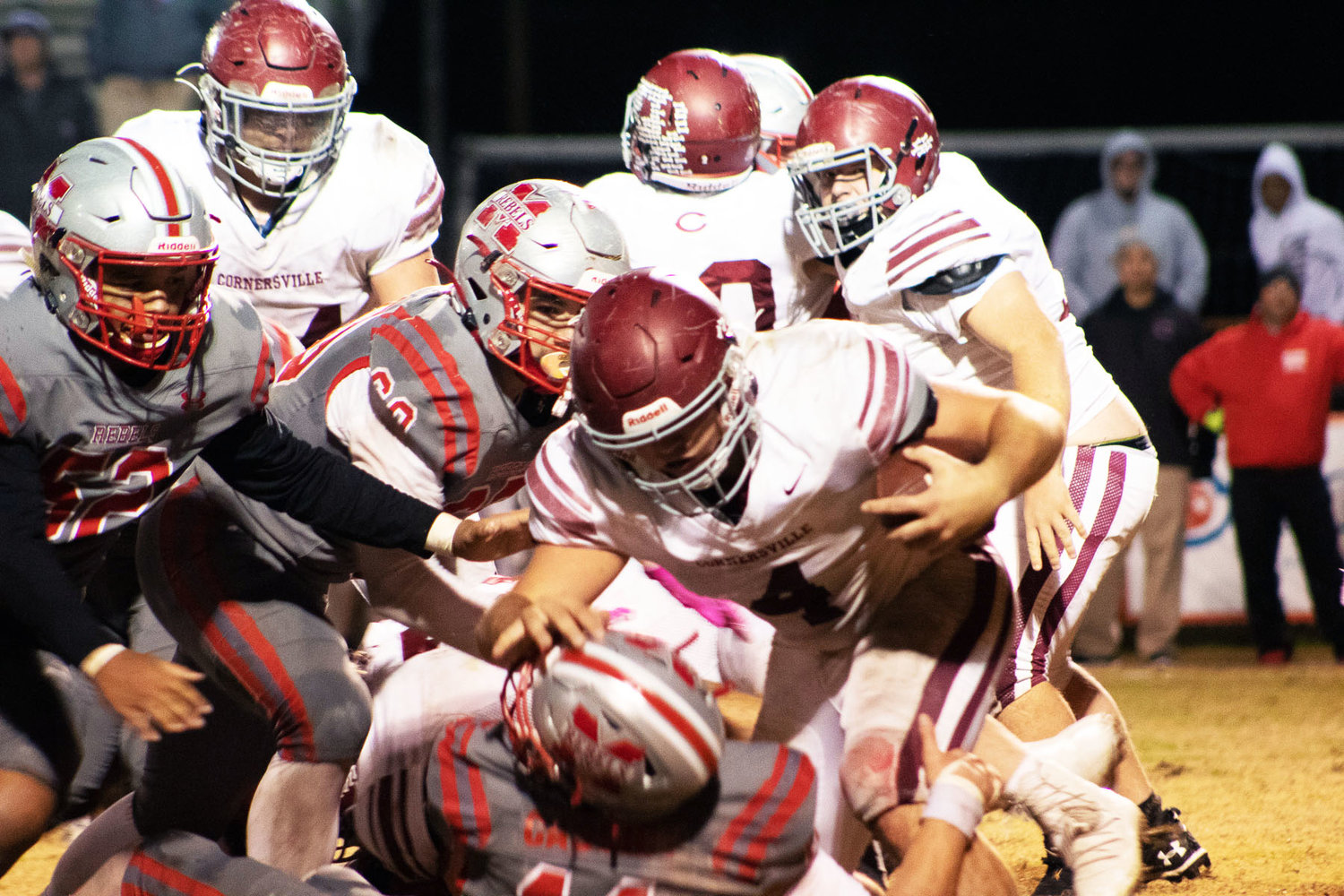 Cason Warner falls forward for a short gain for Cornersville.
Photo courtesy of the McKenzie Banner 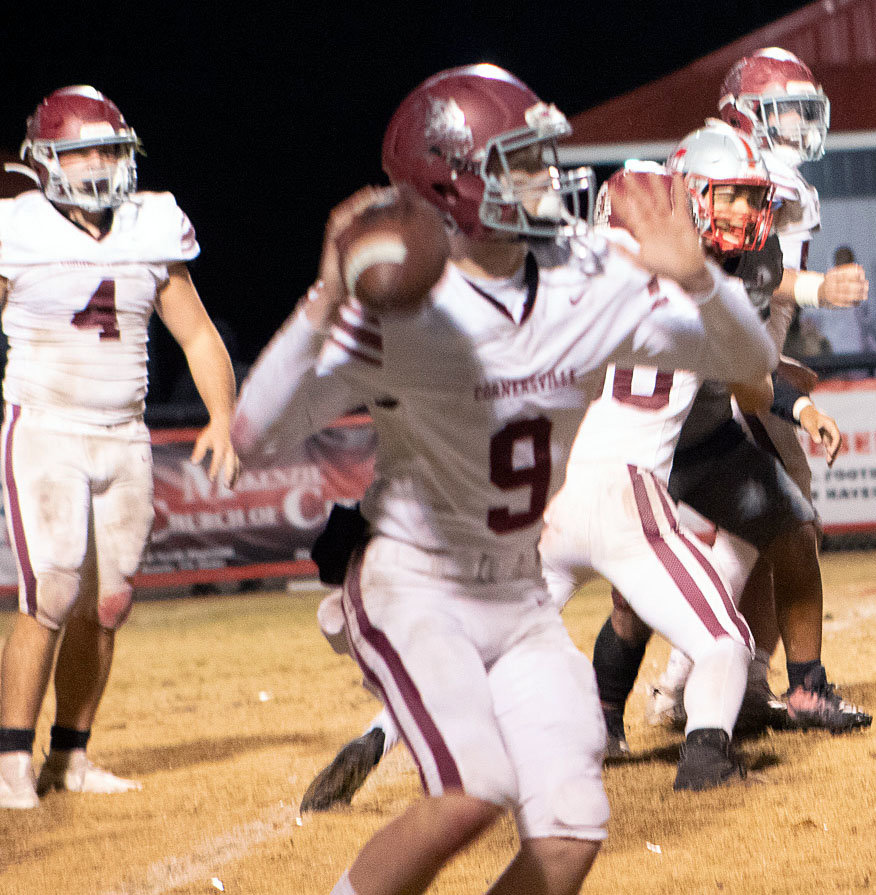 Blaine Woodard peels out of the pocket and fires a pass downfield.
Photo courtesy of the McKenzie Banner
Previous Next
Posted Thursday, November 18, 2021 10:29 pm
By Chris Siers ~ sports@t-g.com
McKENZIE — All season long, Cornersville (9-3) has relied on a potent run offense that has allowed the Bulldogs to forge their way to a second-round Class 1A playoff berth.
Unfortunately for Cornersville, that offense was held in check against unbeaten McKenzie (12-0) and the Bulldogs saw their season come to a close following a 28-0 loss at McKenzie on Friday night.
In total, the Bulldogs were limited to just 34 yards of total offense, with just 18 coming on the ground.
McKenzie scored the game’s first touchdown in the first quarter when quarterback Jackson Cassidy hit Marquez Taylor on a 15-yard touchdown pass.
The Bulldogs were forced to punt away the following drive, but a Rebel fumble set Cornersville up with prime field position on the Rebels’ 28-yard line.
While able to press well inside the McKenzie red zone, Cornersville was held in check and unable to score.
The hosts added a second score just before the half when Taylor caught 13-yard touchdown pass from Cassidy to bump the McKenzie advantage to 14-0 at the break.
With both offenses unable to effectively sustain drives on each other in the third frame, it was an interception that facilitated the Rebels’ third score of the night.
Cassidy intercepted a Cornersville pass and three plays later, Taylor found the end zone for his third score of the night to give the Rebels a 21-0 lead after the successful kick after.
McKenzie added one final score in the fourth quarter, this time coming on a 15-yard run by Taylor for the final margin of victory.
Caden White completed 2-of-3 passes for 16 yards for Cornersville, with Wesley Pigg hauling in one pass for nine yards.
Cornersville’s stellar run game was held in check to the tune of just 18 yards on 23 carries.
Mason Calahan was the top earner on the ground, carrying the ball five times for 16 yards, while Ben Franklin added 10 yards on eight touches.
Defensively, Rhett Woodard and Bradden Hickman led the Bulldogs with five tackles apiece.
McKenzie proved effective on the ground and through the air, totaling 306 total yards of offense, with 205 coming on the ground.
Cassidy was effective in the pass game for the Rebels, completing 7-of-8 attempts for 101 yards and a pair of touchdowns.
He, along with Taylor, were the top earners on the ground.
Cassidy totaled 97 yards on 14 touches and found the end zone once, while Taylor added 97 yards and a score of his own.
The loss ends the season for Cornersville in what’s been a stellar season for the Bulldogs.
Cornersville wraps up the season after finishing second in Region 5-A.
The Bulldogs’ only two regular season losses came to Clay County, who finished the 2021 campaign with a 10-2 overall record, and defending Class A state champion Fayetteville, who will face McKenzie on Friday night in a battle of unbeatens in the state quarterfinals.
Cornersville 0  0  0  0 —   0
McKenzie 7  7  7  7 — 28
First Quarter
M — Marquez Taylor 15 pass from Jackson Cassidy, (Zach Aird kick), 6:56.
Second Quarter
M — Taylor 13 pass from Cassidy, (Aird kick), 0:25.
Third Quarter
M — Cassidy 6 run, (Aird kick), 1:33.
Fourth Quarter
M — Taylor 15 run, (Aird kick), 9:14.