CORNERSVILLE — For the better part of three and a half quarters, the Cornersville Bulldogs hung tough against the up-tempo pace by the Marshall County Tigers during Tuesday night’s … 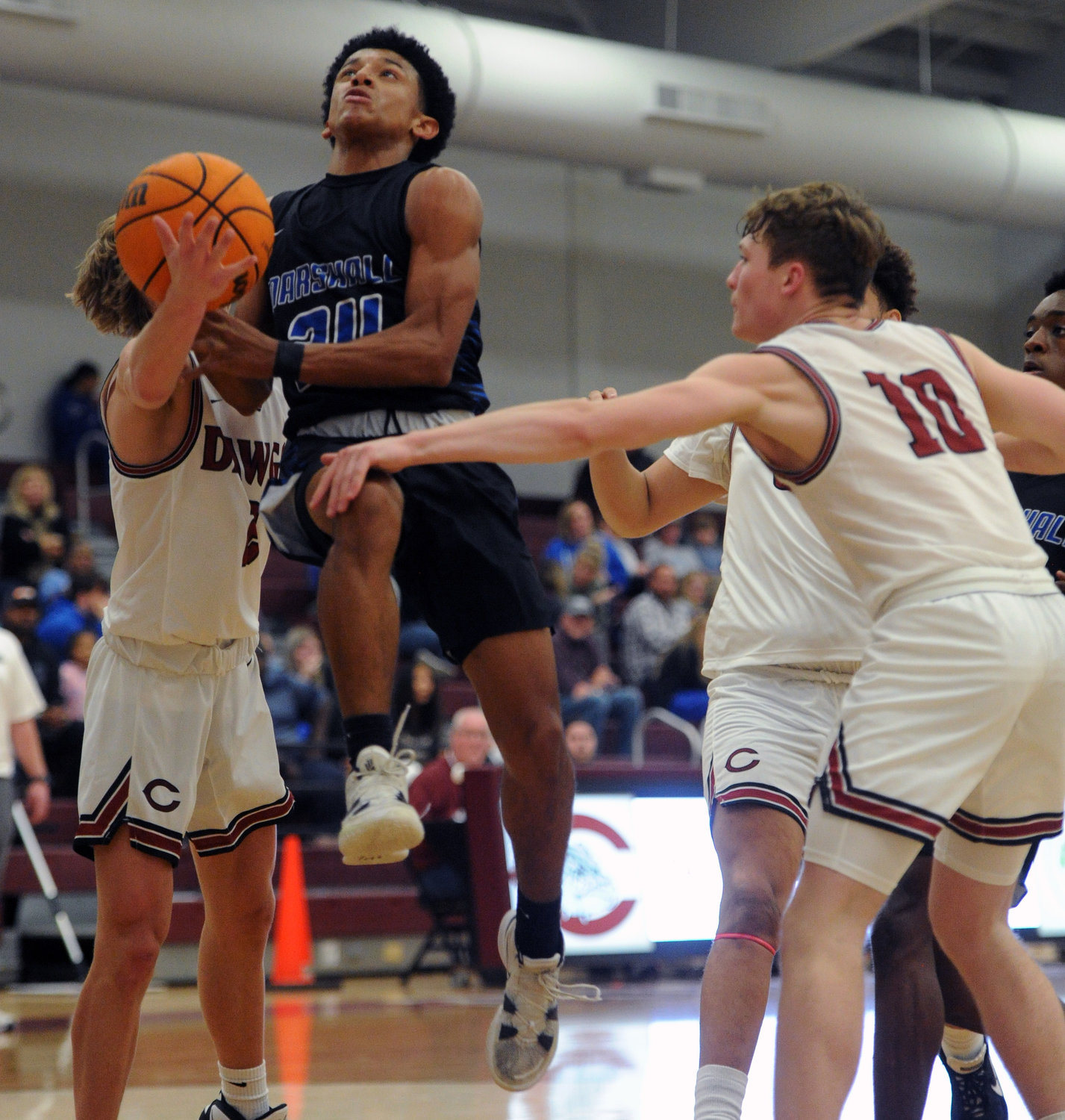 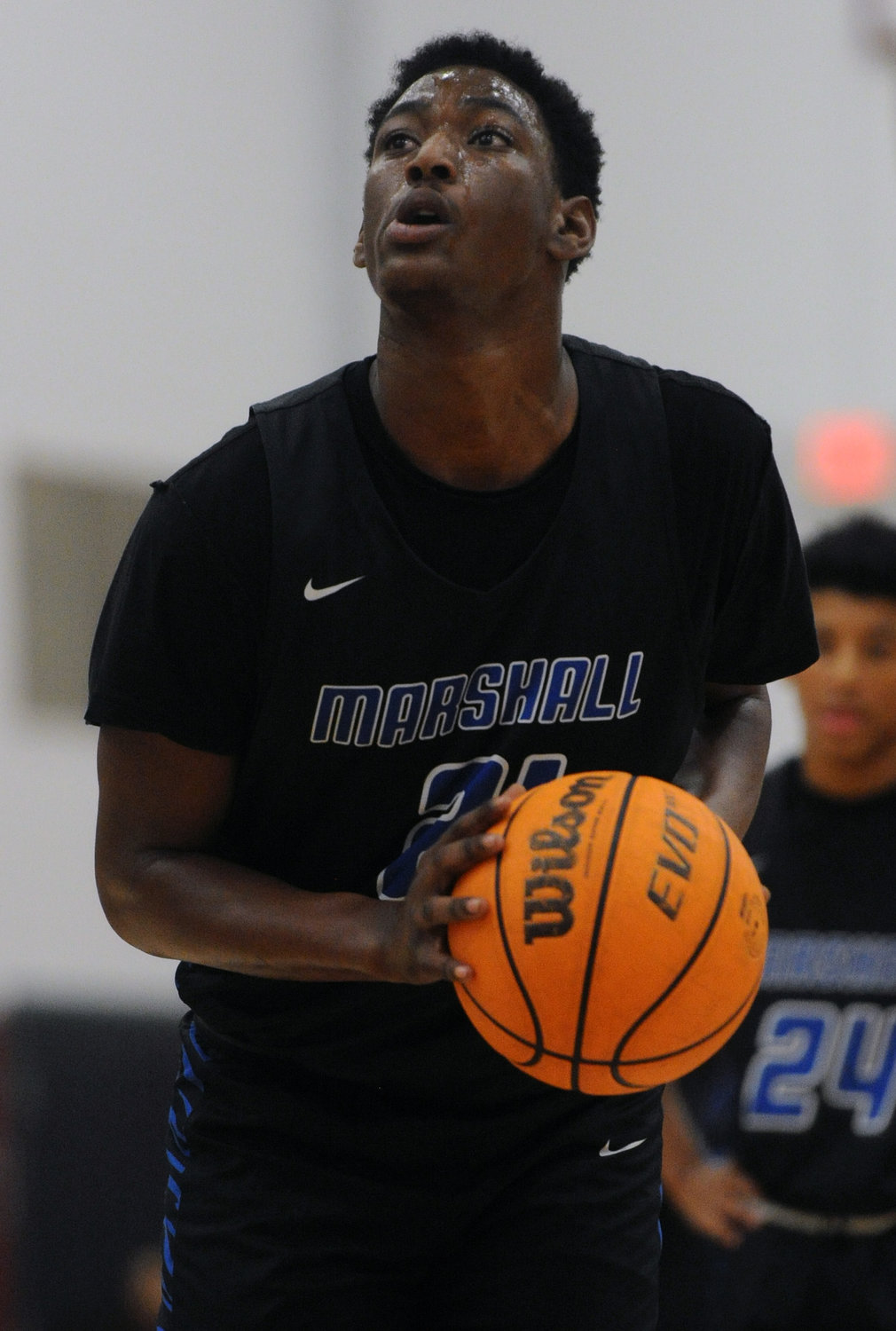 Jayden Hart settles in for a free throw attempt in the first half. He led all scorers with 19 points on Tuesday.
Tribune Photo by Chris Siers 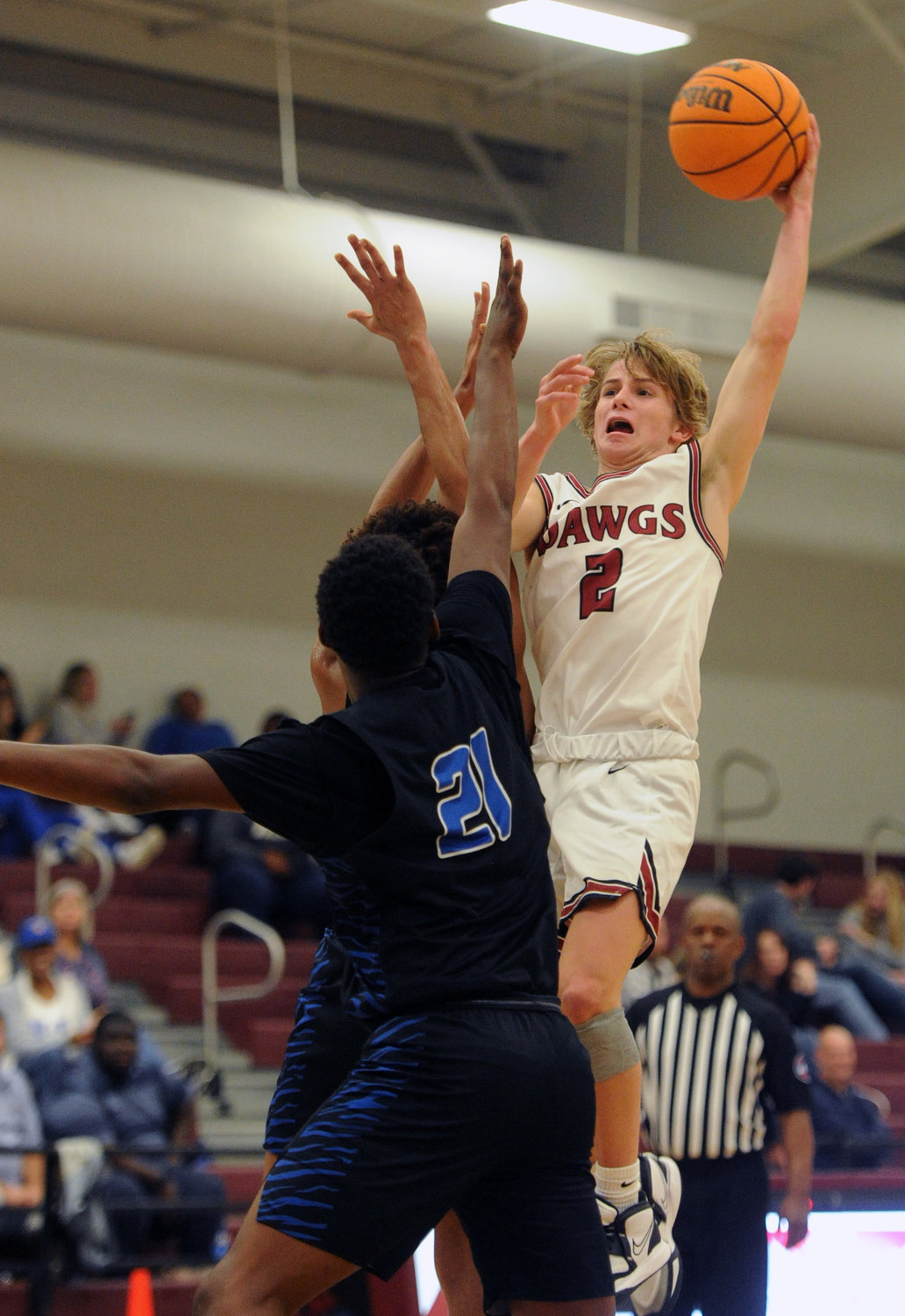 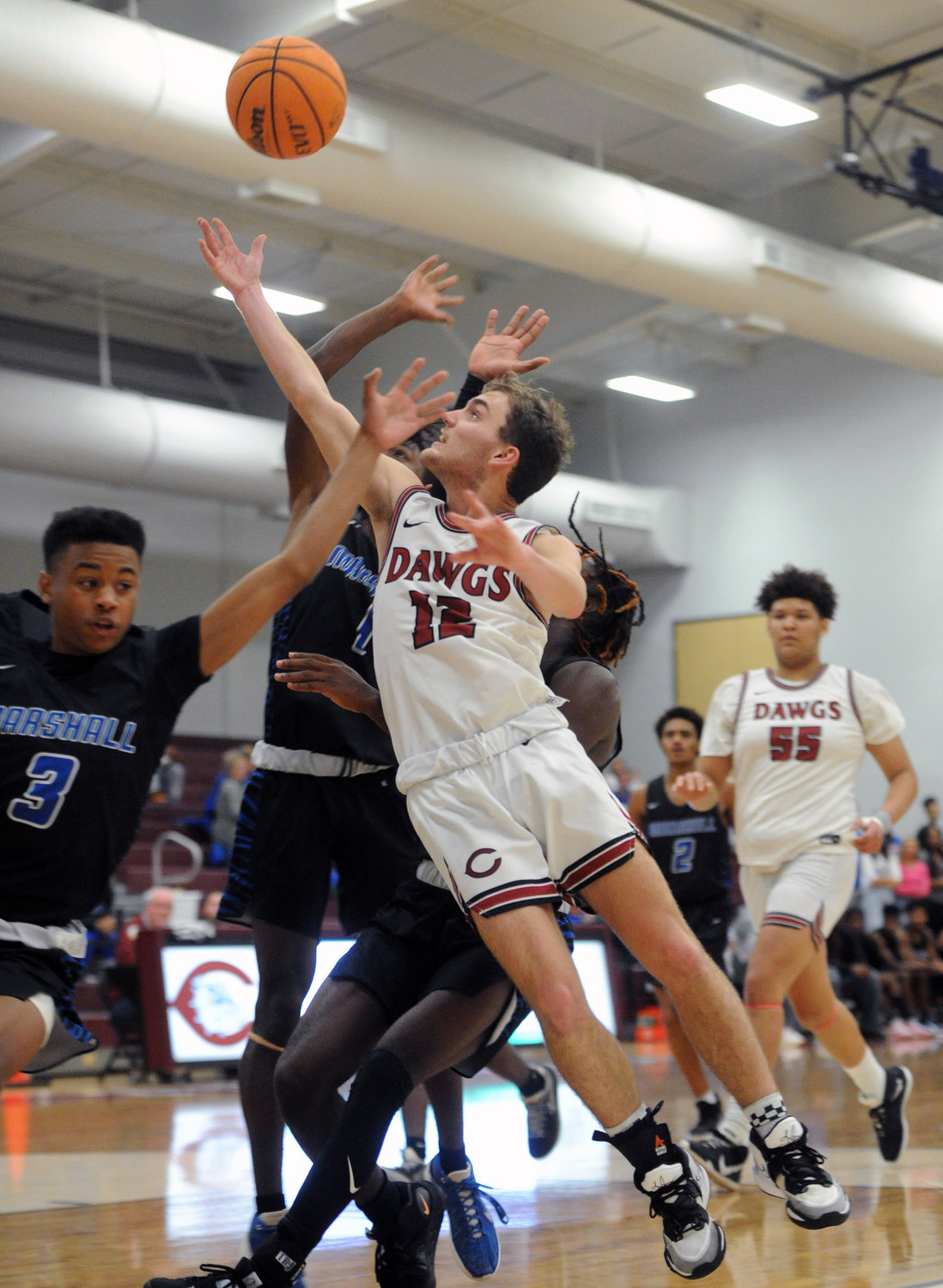 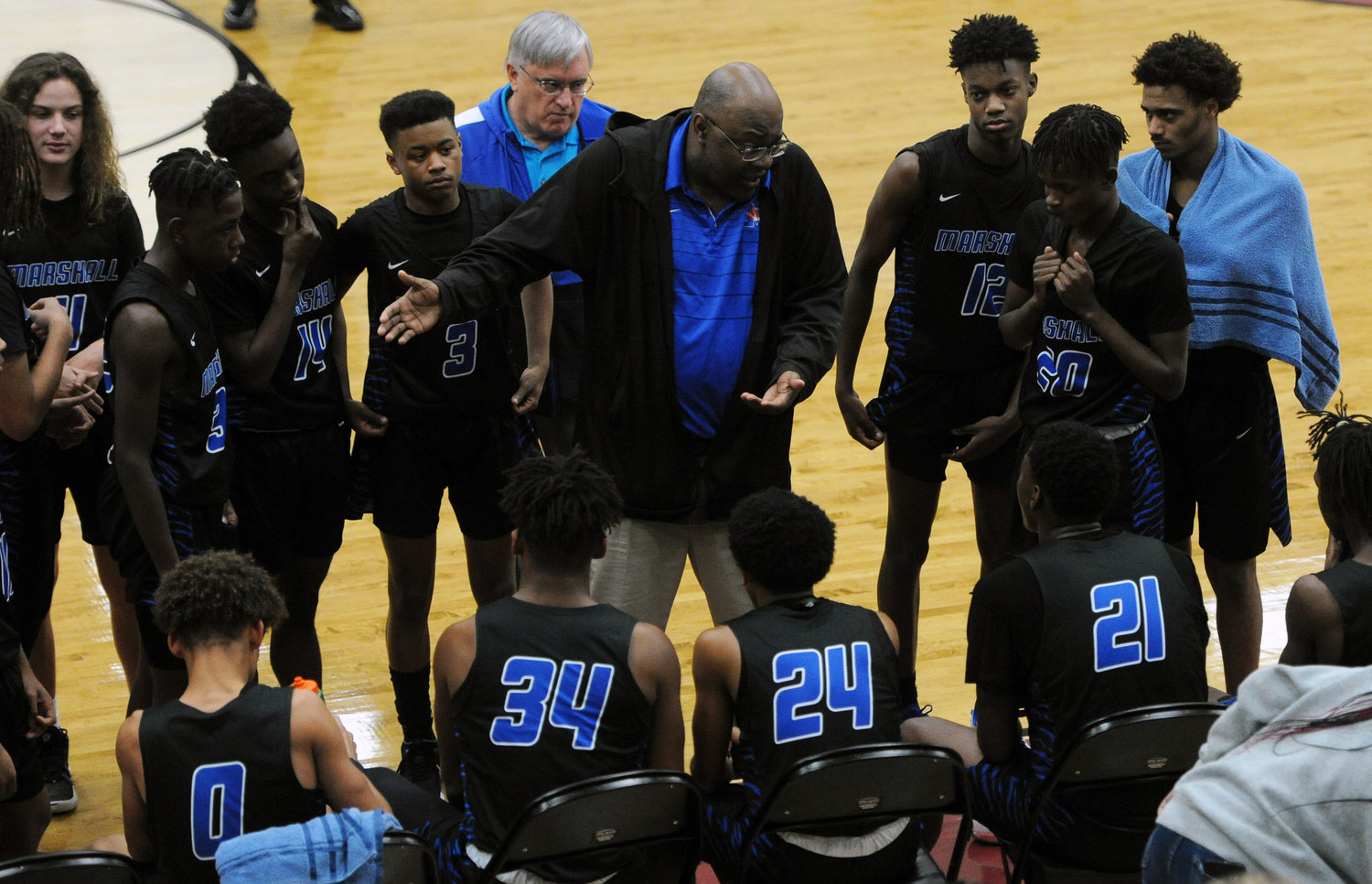 CORNERSVILLE — For the better part of three and a half quarters, the Cornersville Bulldogs hung tough against the up-tempo pace by the Marshall County Tigers during Tuesday night’s in-county clash.
While the Bulldogs were able to keep the game within a possession or two at multiple points in the second half, eventually the Tigers were able to capitalize off several turnovers and coast to a 64-44 win over Cornersville.
“That was the big thing. We really tried to pick up the tempo and wanted to trap and get into a transition game, instead of get into a half court game. That’s one thing we do well is in transition, from transition offense to transition defense,” Tiger coach Lavon King said.
Marshall County pushed the pace early, but the up-tempo pace, coupled with a pressure defense, led to early foul issues that forced King to turn to the depth on the bench rather early.
Despite a 6-0 Tiger run to start the second quarter, Cornersville hung tough and with a timely three-pointer by Kel Ford Mitchell in the closing seconds, the Bulldogs closed within two possessions by halftime.
That back-and fourth trend continued into the third quarter with the Tigers managing to out-score their hosts just 14-11 in the third period.
“We hung in there. In the first half, I thought we ended on a good note and had a big three at the end of the half. In the third quarter, we had it down to two or three and then we had some turnovers and they ended up taking a pretty big lead at that point,” Cornersville coach Dakota Brown said.
After a basket by Ben Franklin pulled Cornersville within four points with 50 seconds left in the third, the Tigers answered with back-to-back baskets by Aja Jones to bump the advantage to eight points by the end of the third.
Marshall County stretched its lead to double figures by opening the fourth quarter on an 8-1 run to take a 15-point lead with 5:45 left in regulation.
In the monster fourth, the Tigers piled on 22 points to close out the 20-point margin of victory.
While the final score leaned heavily in favor of the Tigers, the game was never truly out of reach for Cornersville for much of regulation.
Leaning on the efforts of Gage Lovell, Cornersville remained well within striking distance of the Tigers’ lead for much of regulation.
“He’s been big for us all season. He’s a heck of a ball handler. He’s sort of the soul of us right now. He had a big night. I was proud of how he handled the pressure—I was proud of the wall my kids handled the pressure. I thought they all did a pretty good job of handling what they threw at us all night,” Brown said.
Lovell, along with Hayden Grover, led the home team with 12 points apiece.
For the Tigers, the efforts of point guard Jamal Gentry, and scoring efforts of Jayden Hart, helped guide the visitors to the win against their in-county opponents.
“Jamal really does a great job of applying pressure to the opposing team’s point guard and creating havoc. It’s really hard for them to get into an offensive set when he’s pressuring and playing defense without fouling. That’s huge,” King said.
Hart led the way with 19 points to lead all scorers, while Jones also hit double figures and added 13. Gentry chipped in eight as well.
With the earlier foul trouble, King had to lean on the depth of his bench to bridge the gap to halftime until the second half, when the Tigers were able to once again execute their pressure defense and create extra possessions and points in transition.
“We have a lot of guys I feel like who can come in and contribute, whether it’s from two minutes to eight or 10. That’s one of those things we’re hoping to continue—just trying to make our defense and our depth a little bit stronger for district play after Christmas,” King said.
Cornersville had a decisive size advantage in the post that allowed the Bulldogs to crash the boards and limit Marshall County at points to single-shot possessions, but feeding the post to create offense was an inconsistency at best.
“I felt like we didn’t do as good of a job getting the ball inside to our post players. We had some opportunities to do that, but we just didn’t get the ball inside enough to get some easy buckets,” Brown said.
While the game plan of attacking the post didn’t result in as many points as Brown would have liked, the Bulldogs still stood their ground against an athletic Tiger squad for the bulk of regulation.
And playing an athletic team like Marshall County that wants to press the pace up and down the court was a positive for the Bulldogs and their first-year head coach.
“You want to play good competition and good teams this time of year. We’re definitely doing that playing them. They have a good group over there,” Brown said.
Like Brown, King was complementary of the Bulldogs’ tenacity and their refusal to simply lay down and quit.
“For us right now, any win is a good win. It’s nice to come out with a win and those kids played hard. They weren’t backing down. It was a fun experience with the atmosphere,” he said.
Both squads are back in action later this week, with Marshall County hosting Glencliff on Friday night, while the Bulldogs travel north to face rival Forrest in Chapel Hill.