LEWISBURG — All Homecoming week, Marshall County coach Thomas Osteen preached to his team about playing up to its standard, regardless of the opponent. The No. 5 ranked Tigers delivered as … 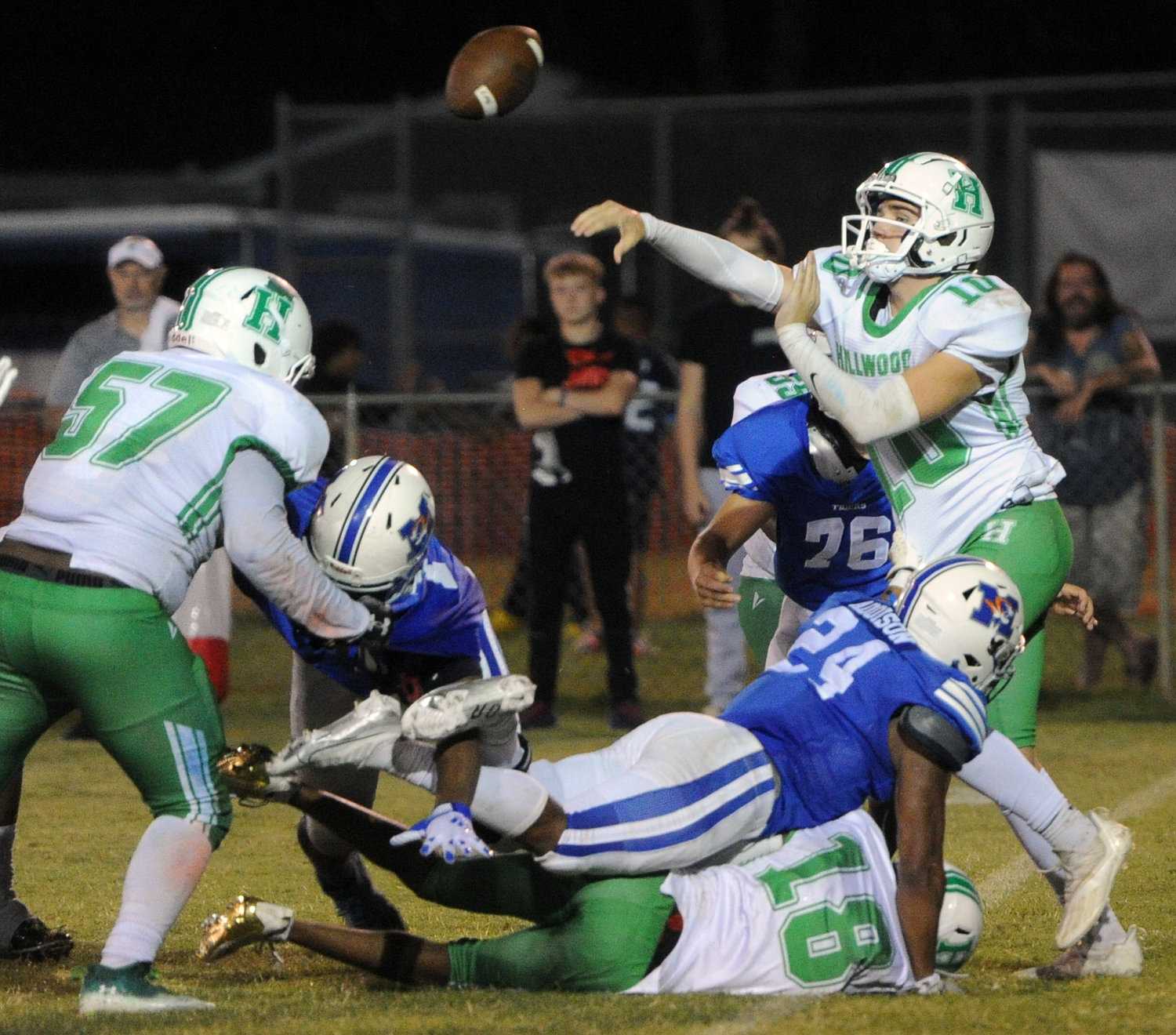 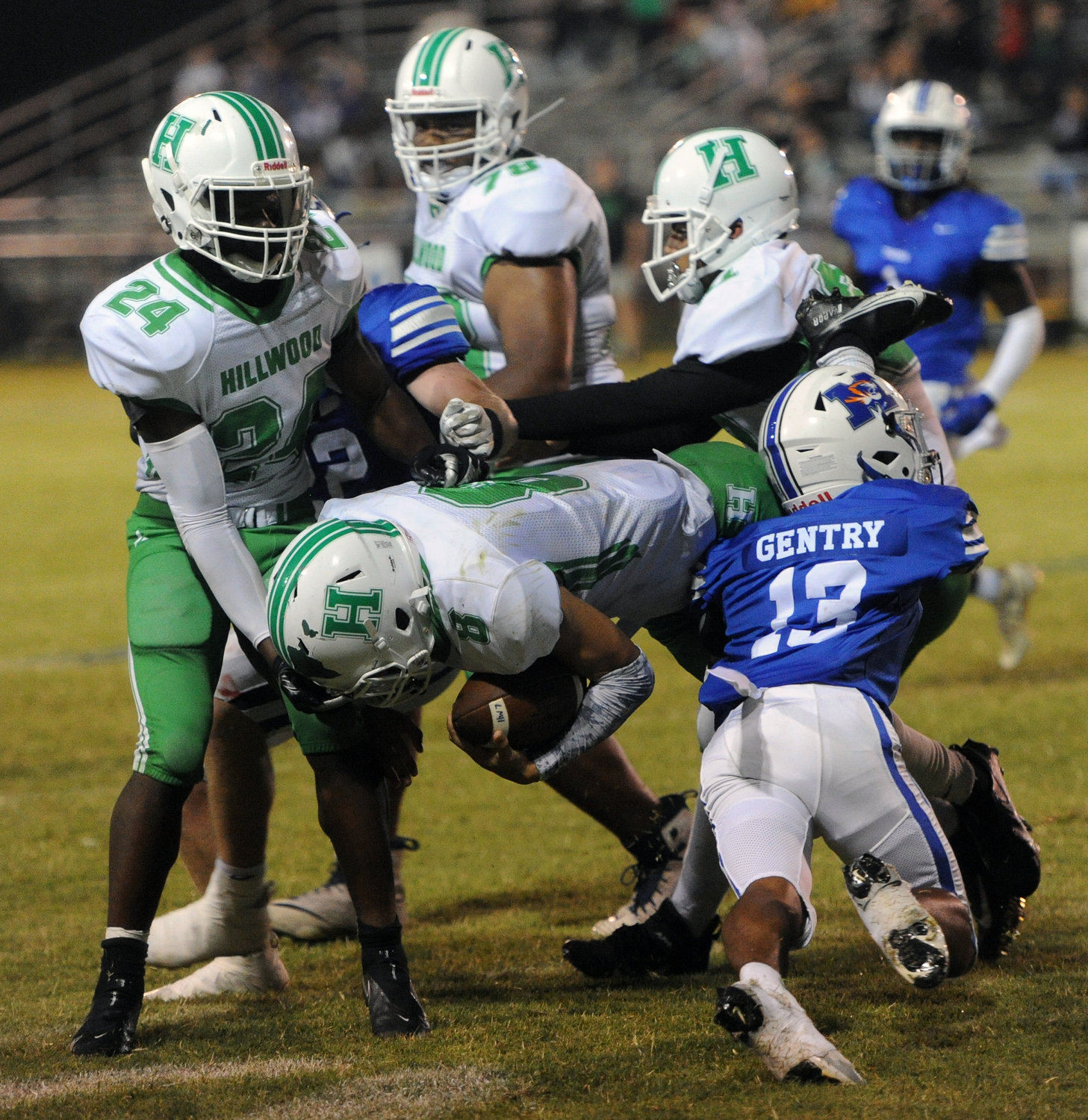 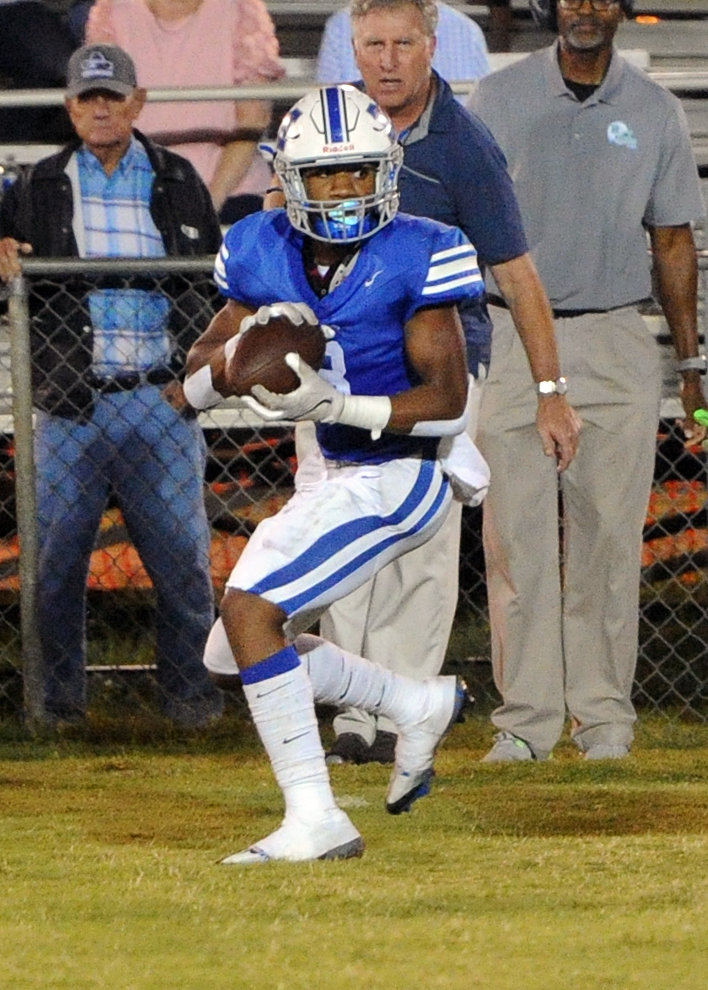 Jayden Randolph hauls in a pass from Tiger quarterback Silas Teat. He made six catches for 88 yards, all of which came in the first half.
Tribune Photo by Chris Siers
Previous Next
Posted Monday, September 19, 2022 11:21 am
By Chris Siers ~ sports@t-g.com

LEWISBURG — All Homecoming week, Marshall County coach Thomas Osteen preached to his team about playing up to its standard, regardless of the opponent.
The No. 5 ranked Tigers delivered as Marshall County piled up big numbers in the first half en route to a 45-7 win on Homecoming night.
“Really happy with the way we handled the week. We wanted the kids to have good memories and a good time throughout the week, but that being said, the most important thing is to play well on Friday night,” Osteen said.
“We talked about no matter who the opponent was to play to our standard all night. From the very start, I feel like we did that.”
Marshall County (5-0, 3-0) exerted its will against Hillwood (1-4, 1-2), building a huge 42-0 lead by halftime.
The Tiger offense was clicking on all cylinders and utilized a balanced attack against the Hilltoppers.
The Tigers rushed for 200 yards and were led by Antomme Cowhtorn’s 50-yard effort.
He found the end zone twice in the first half, highlighted by a 43-yard score on the game’s opening drive.
Kamariq Perryman and Jakavan Curry also found the end zone on rushing touchdowns as well.
The running back by committee saw eight different ball carriers for the Tigers average over nine yards per carry.
With senior tailback Demari Braden nursing an ankle injury, Osteen was pleased with the effort the Tigers gave on the ground in his absence.
“We want to get Demari back, and he’s going to have about three weeks here to rest that ankle for the home stretch.
Antomme Cowthorn had a good night. Jakavan Curry, Kamariq Perryman — really had a running back by committee tonight. Those guys did a good job,” Osteen said.
The Tigers also were efficient through the air with junior quarterback Silas Teat connecting on 11-of-16 attempts for 13 yards and a pair of touchdowns.
Junior Jayden Randolph was the top target of the night, hauling in six catches for 88 yards.
Tight end John Morgan Thomas caught a 12-yard touchdown pass and sophomore Aja Jones added a nine-yard touchdown reception.
“I feel like we protected the quarterback and we were pretty clean for the most part. Silas had a good game. Happy with how efficient we were on offense and how efficient we were on defense as well,” Osteen said.
Hillwood’s best starting field position came late in the first quarter after a 55-yard kickoff return put the Hilltoppers in Tiger territory.
But playing a bend-don’t-break style of defense, Marshall County forced a 24-yard field goal try that was blocked with 21 seconds left in the frame.
Of 118 first-half yards by Hillwood, 59 came on screen pass to Zay Sanders.
Other than that, the Tigers played a lockdown defense that didn’t budge against the Hilltoppers.
Curry, along with Marquay Allen and Thomas Beech led the team with five tackles apiece.
Perryman and Brock Anderson also recorded a tackle for loss, while Isaiah Stewart added a sack.
Kicker Wyatt Joyce also had a homecoming night to remember, connecting on six extra points and a 25-yard field goal.
He also added three touchbacks as well.
The win comes at a good time for the Tigers, who sit at 5-0 at the halfway point of the season with a bye week this week.
“I would always rather it be later as opposed to sooner. I think it’s at a good point halfway through where we can evaluate where we’re at and get some people healed up. We’ve got five region games to end the year. You have to win five region games in this region just to get to the playoffs. We have to find two more to get to the playoffs and see how much we can improve our seed after that,” Osteen said.
When Marshall County returns to action, the Tigers will play three-straight Thursday night road games, beginning with a trip to Lawrence County next week.
Marshall County then makes the trip to Pearl Cohn and Glencliff before closing the season with home games against Montgomery Central and Greenbrier.
“It’s kind of weird. We’re going to have plenty of time to prepare for Lawrenceburg. The last one is on fall break, so it kind of looks weird, but it’s not as bad as it looks,” Osteen said.
The Tigers will kick off at Lawrence County next Thursday night at 7 p.m.