LEWISBURG — To win playoff football games, teams have to win the turnover margin and be able to establish the run.Marshall County (10-1) checked both those boxes on Friday night against … 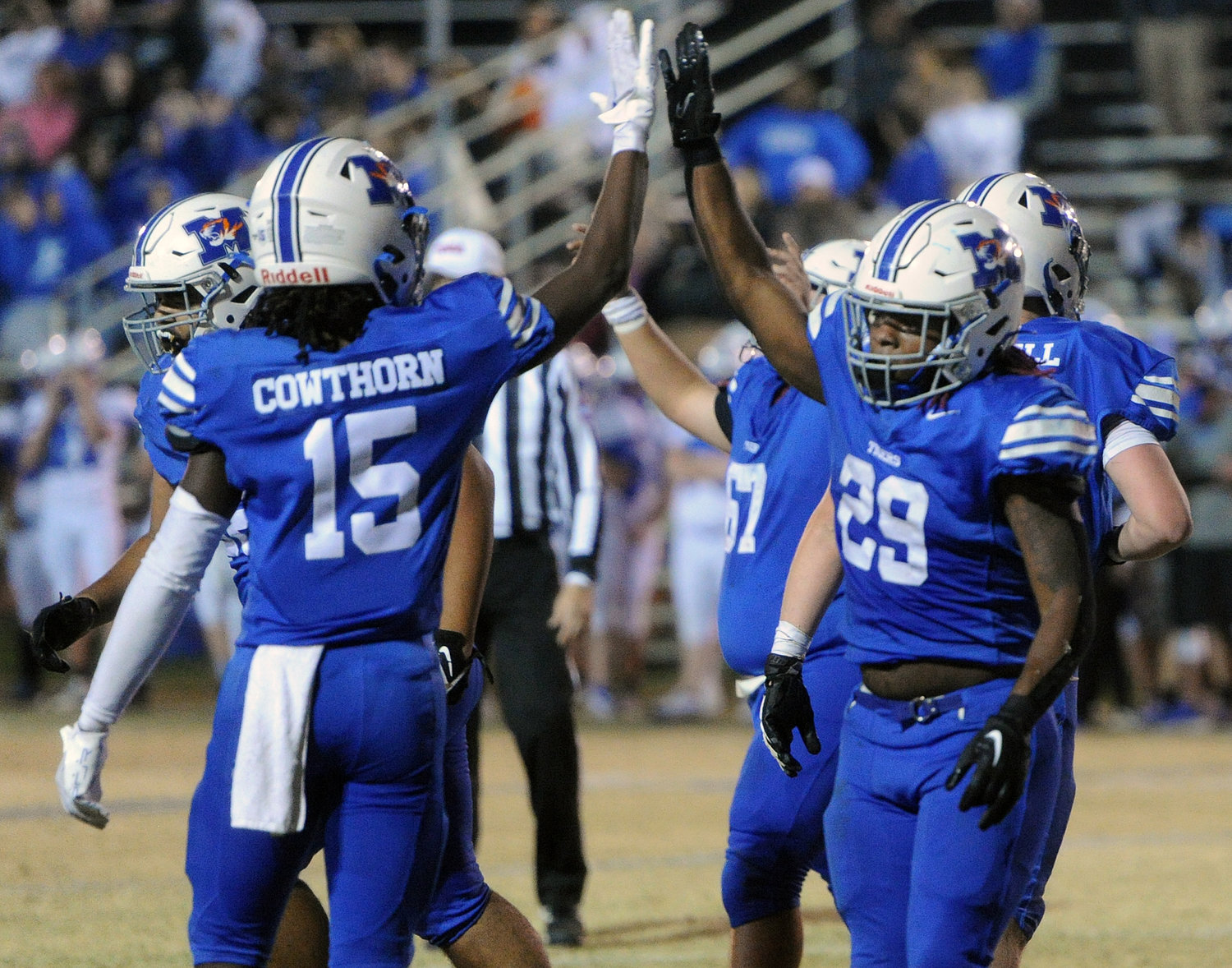 Demari Braden (29) catches a high five from Antomme Cowthorn after scoring one of his three rushing touchdowns on Friday night.
Tribune Photo by Chris Siers 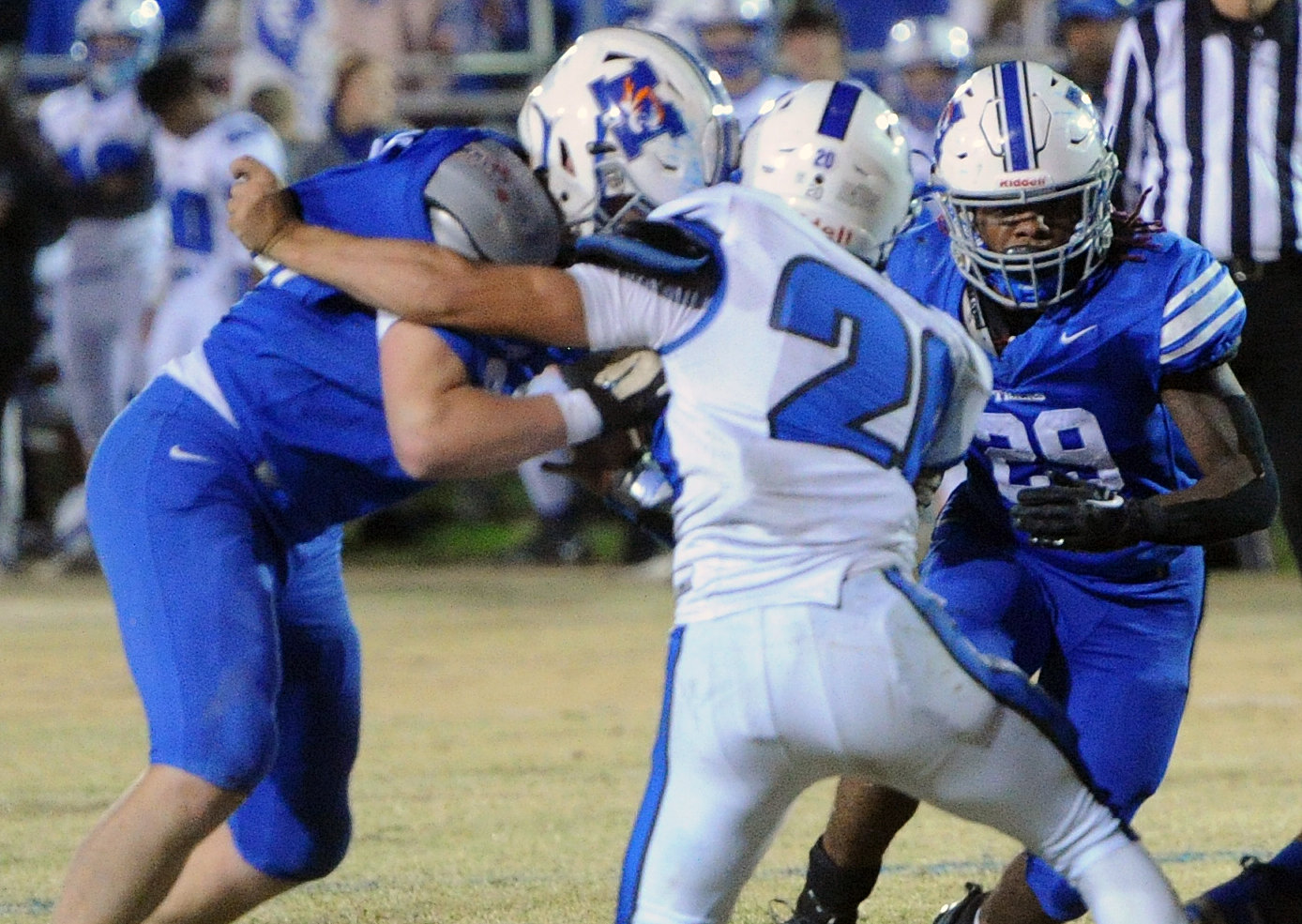 Demari Braden (29) picks up a block and finds a crease on a big gain for the Tigers. He totaled 157 yards and three touchdowns against Chester County on Friday night.
Tribune Photo by Chris Siers 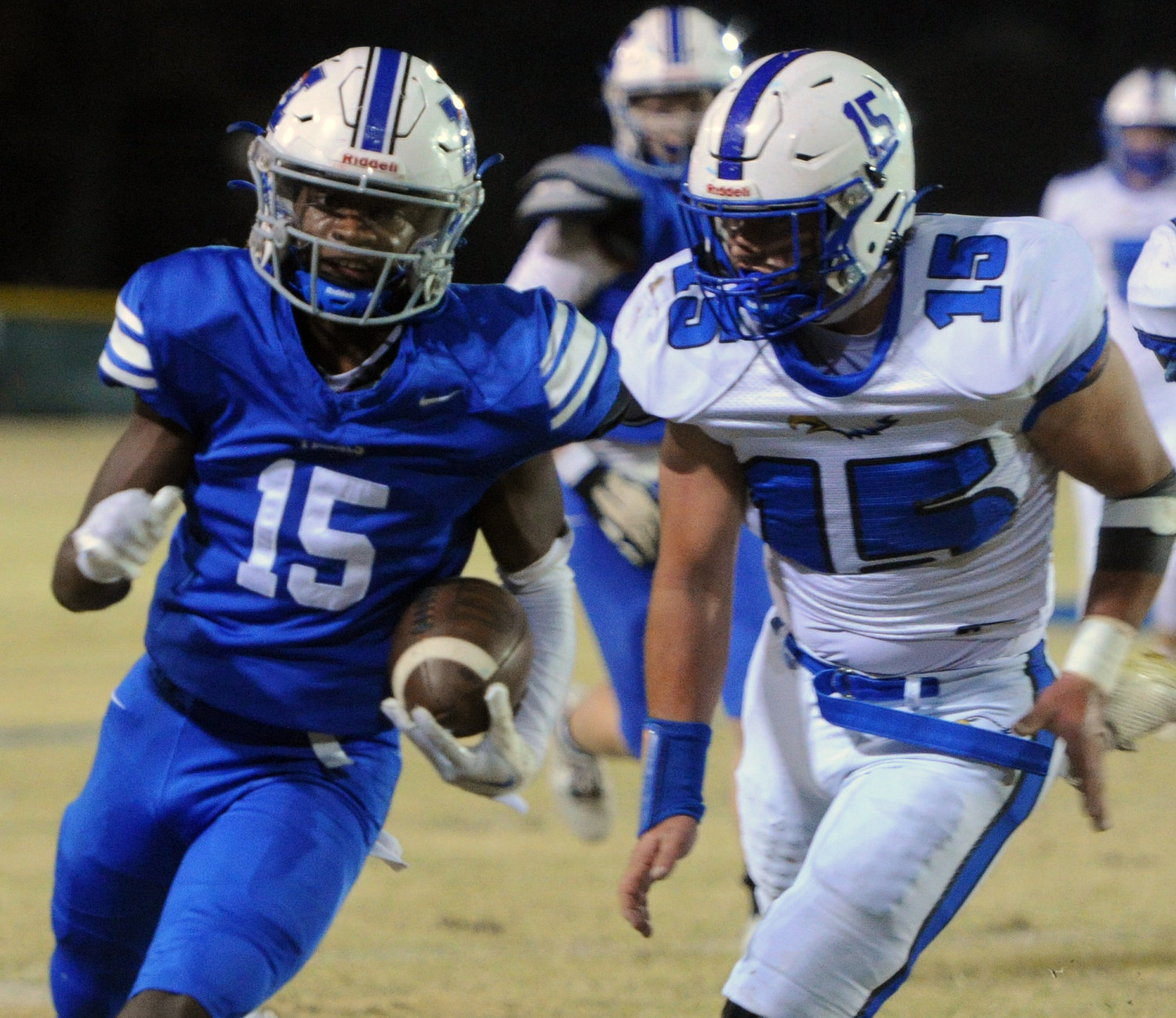 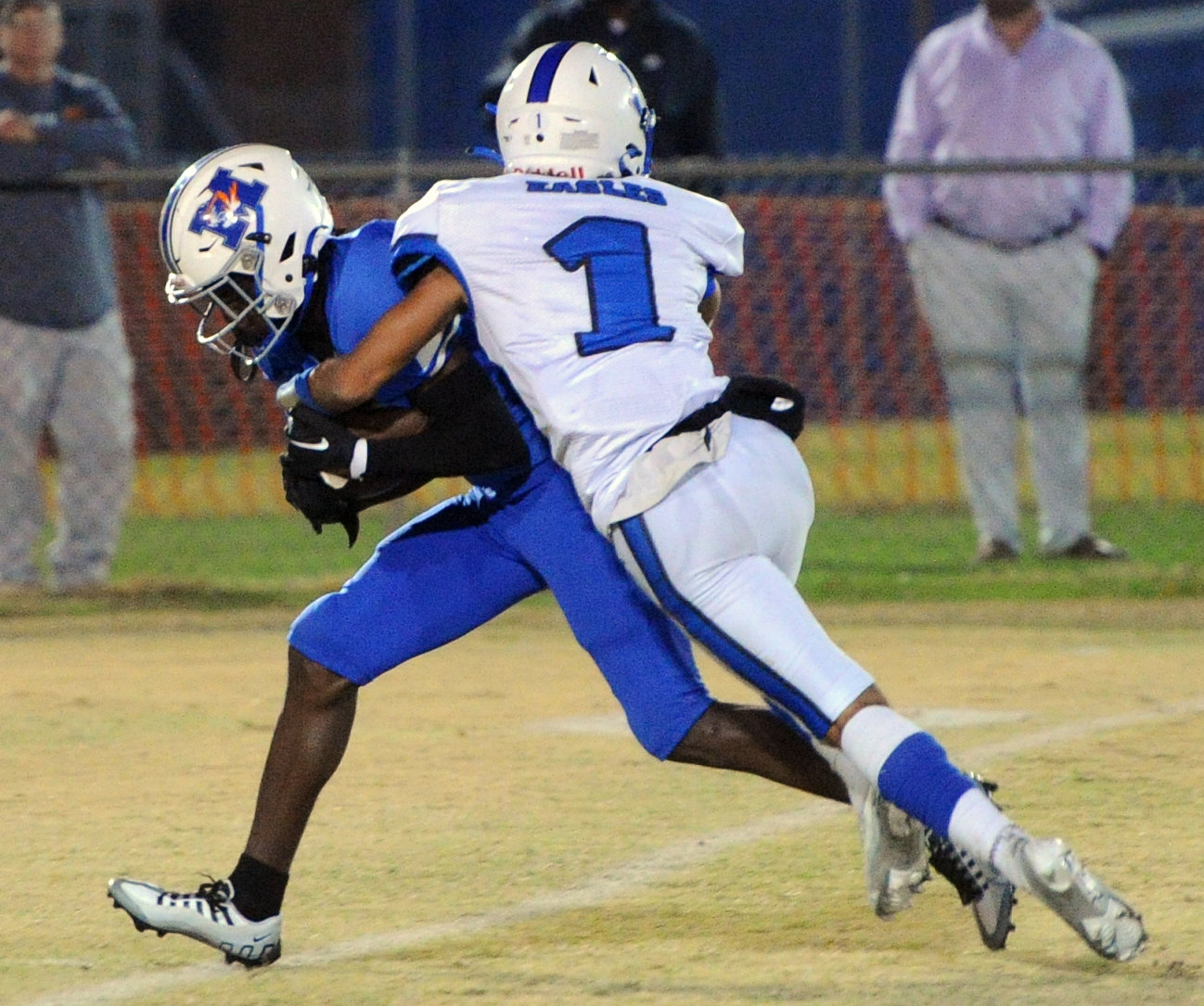 Aja Jones drags a Chester County defender along on a 36-yard pass from Silas Teat.
Tribune Photo by Chris Siers 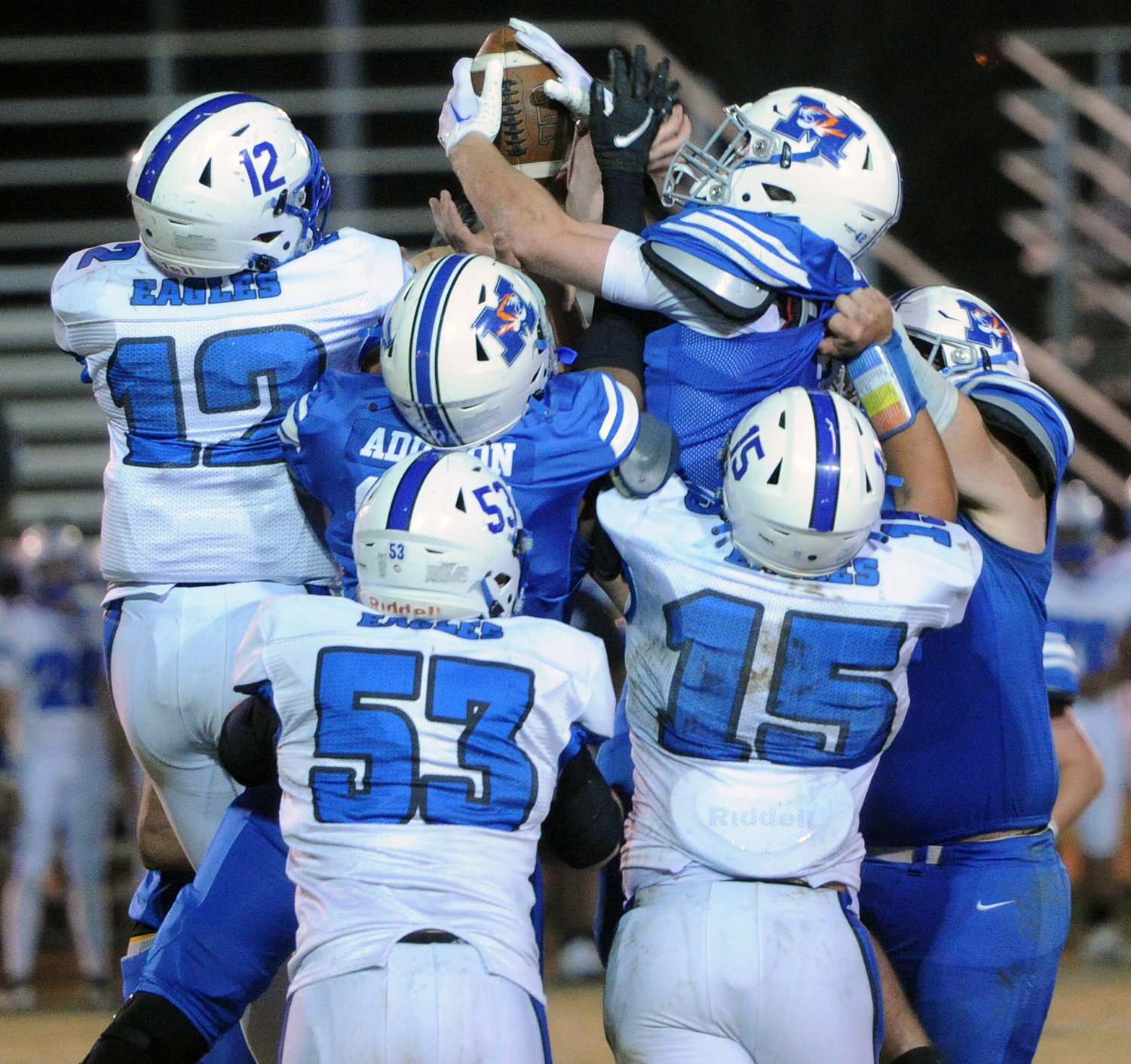 A host of Tigers and Eagles battle for a ball that was tipped in the air at the line of scrimmage.
Tribune Photo by Chris Siers
Previous Next
Posted Sunday, November 6, 2022 2:45 pm

I feel like they’re much better than a lot of people thought a three-seed would be. Hats off to them for giving us a ton of trouble for two and a half quarters, but we’re even more proud of the way our guys responded to a tight game and feeling the heat in the second half.”
Marshall County coach Thomas Osteen
By Chris Siers ~ sports@t-g.com

LEWISBURG — To win playoff football games, teams have to win the turnover margin and be able to establish the run.
Marshall County (10-1) checked both those boxes on Friday night against three-seed Chester County (6-5) in the 49-17 win over the Eagles.
“I feel like they’re much better than a lot of people thought a three-seed would be. Hats off to them for giving us a ton of trouble for two and a half quarters, but we’re even more proud of the way our guys responded to a tight game and feeling the heat in the second half,” Marshall County coach Thomas Osteen said.
Senior tailback Demari Braden was the key cog in the Tigers’ offense, rushing for three touchdowns and 157 yards on 28 carries.
“He (Braden) makes us go. He keeps us on schedule. Everybody likes to look at the fun stuff when we’re throwing it around, but to win in playoff football, you’ve got to be able to stop the run and run the ball. We’ve got a really good one to hand it off to. Couldn’t be more proud of Demari,” Osteen said.
The Tigers also won the turnover battle, recovering two fumbles and picking off Eagle quarterback Evan Schippers—which led to a combined 21 points for Marshall County.
“Turnovers are always important. In playoff football, who wins the turnover margin usually wins. That was a key tonight—defense getting the turnovers and then offense punching it in when we got them,” Osteen said.
While the final score turned out to be a 32-point win for the Tigers, the first half was a struggle against a pesky Chester County team that just wouldn’t go away.
The visitors marched the game’s opening drive 72 yards and took nearly four minutes off the clock, before taking the 3-0 lead on a 25-yard field goal by Colston Callis.
Marshall County answered in short order with a six-play drive capped by Braden’s first score of the night—a 23-yard scamper to the end zone.
Junior quarterback Silas Teat heated up in the second frame and tossed a pair of touchdown passes to his top two targets, Aja Jones and Jayden Randolph, of 10 and 28 yards, respectively.
Two of those touchdowns came via two Eagle turnovers, including a fumble recovered on the Chester County 32-yard line and an interception by sophomore Jamal Gentry.
After Randolphs touchdown reception, the Eagles once again orchestrated a clock-draining drive that was capped by a four-yard run by Landon Rushing with 38 seconds left to pull the score to 21-10 by halftime.
Things took an interesting turn in the third quarter as the Eagles were able to hold the Tigers to a three and out on the first drive of the second half and two plays later, Schippers connected with Peyton Barham on a 54-yard pitch and catch touchdown to pull within four points of the Marshall County lead after the successful kick after.
Chester County went on to intercept Teat on its own four-yard line, but even facing the adversity in a potential tipping point of the game, the Tiger defense forced a punt after the Eagles were backed up to their own 12-yard line and Jones returned the punt to the two-yard line.
Teat finished the short drive on a quarterback sneak to bump the Tigers’ lead back to two scores at 28-17.
“We could have pointed fingers there when it got tight, but the guys didn’t do that. We just kept playing. We’ve done a good job of that all year,” Osteen said.
After Teat’s touchdown, the Tigers added three more touchdowns to close the game, two coming from Braden and an 18-yard capper by Marcus O’Neal for the final score of the night.
Teat completed 8-of-17 passes for 135 yards and a pair of scores, while Braden totaled 157 of the Tigers’ total 222 rushing yards.
Jones made three grabs for 76 yards and a score, while Randolph also added three catches for 39 yards and a touchdown as well.
Senior kicker Wyatt Joyce was also a perfect 7-of-7 attempts on PATs.
On the defensive side of the ball, Jakavan Curry led the team with 17 total tackles, while Grayson Miller chipped in 13.
Darian Crenshaw added nine tackles, including two tackles for loss.
Friday night’s win marked the 10th win of the season, which makes the 2022 campaign the first 10-win season since 2017’s state quarterfinal team.
While locking up the No. 2 seed in Region 5-AAAA guaranteed the Tigers a home playoff game, now Marshall County will have its mettle tested, facing Region 6-AAAA champion Lexington on the road on Friday night.
Lexington (8-3) enters Friday night’s second-round playoff game against Marshall County after defeating Greenbrier, 40-6.
“Going on the road and winning in playoff football is so tough. We’re going to be playing a region champion in Lexington. We’re going to enjoy this one this weekend, but we’ll need to play our best game of the year to win next week,” Osteen said.
Kickoff is set for 7 p.m. in Lexington.