Tigers’ run ends in 2nd round of playoffs

LEXINGTON — What’s been a fantastic season for the Marshall County Tigers (10-2) came to a close on Friday night in the second-round of the Class 4A state playoffs.Lexington (9-3), the …

Tigers’ run ends in 2nd round of playoffs 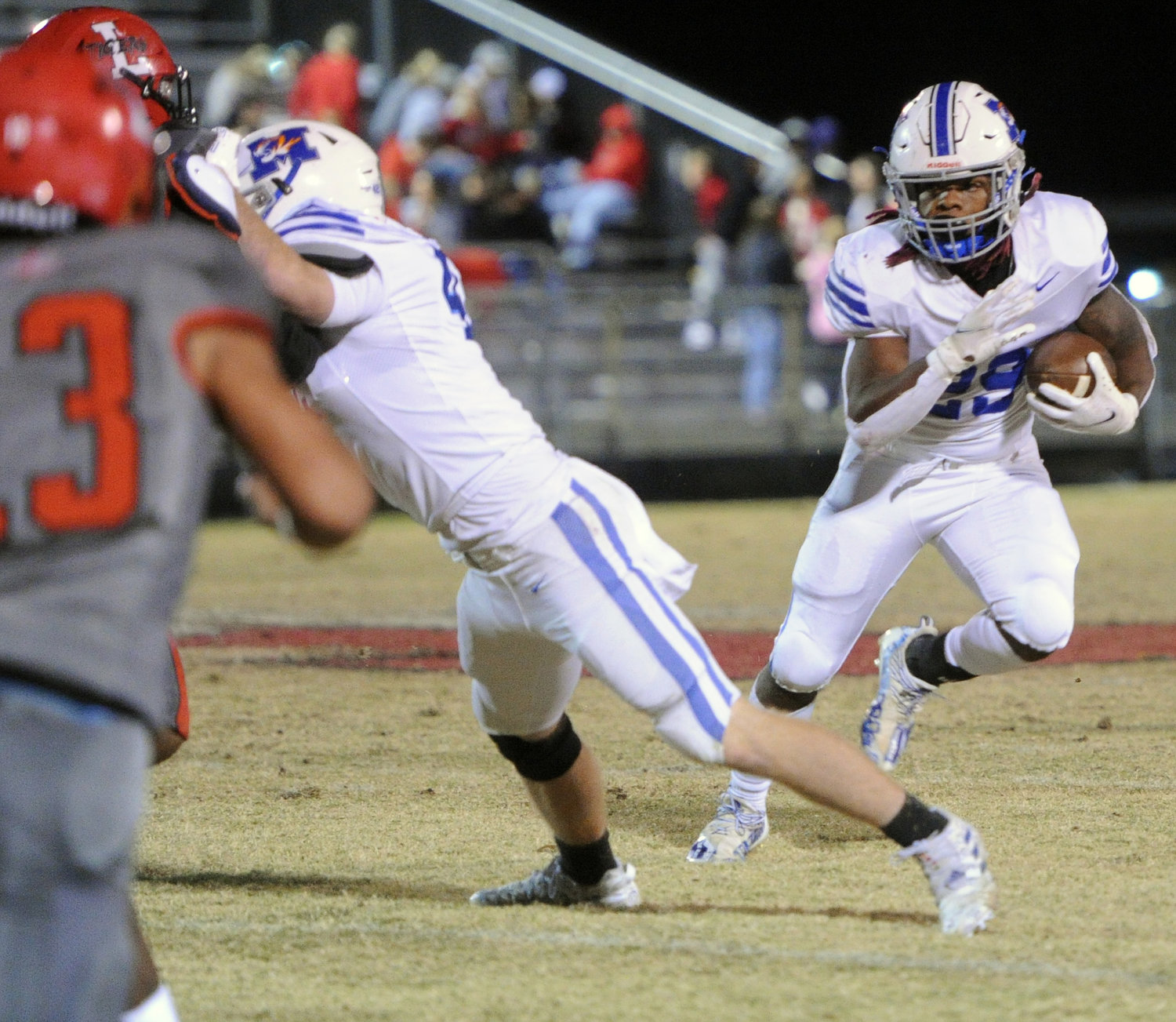 Demari Braden picks up a block and scampers forward for a 37-yard gain against Lexington.
Tribune Photo by Chris Siers 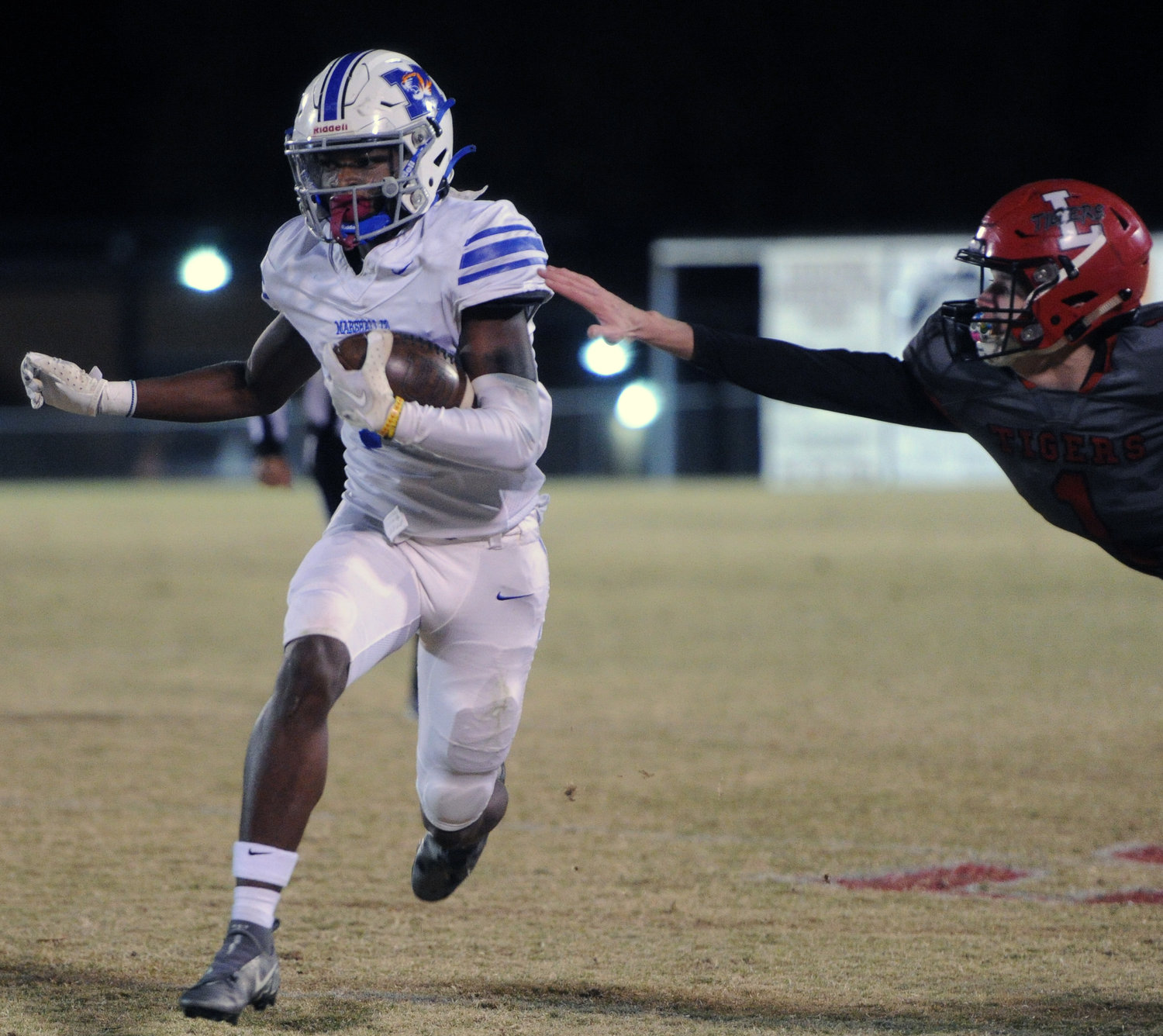 Antomme Cowthorn finds a crease and scrambles for a short gain.
T-G Photo by Chris Siers 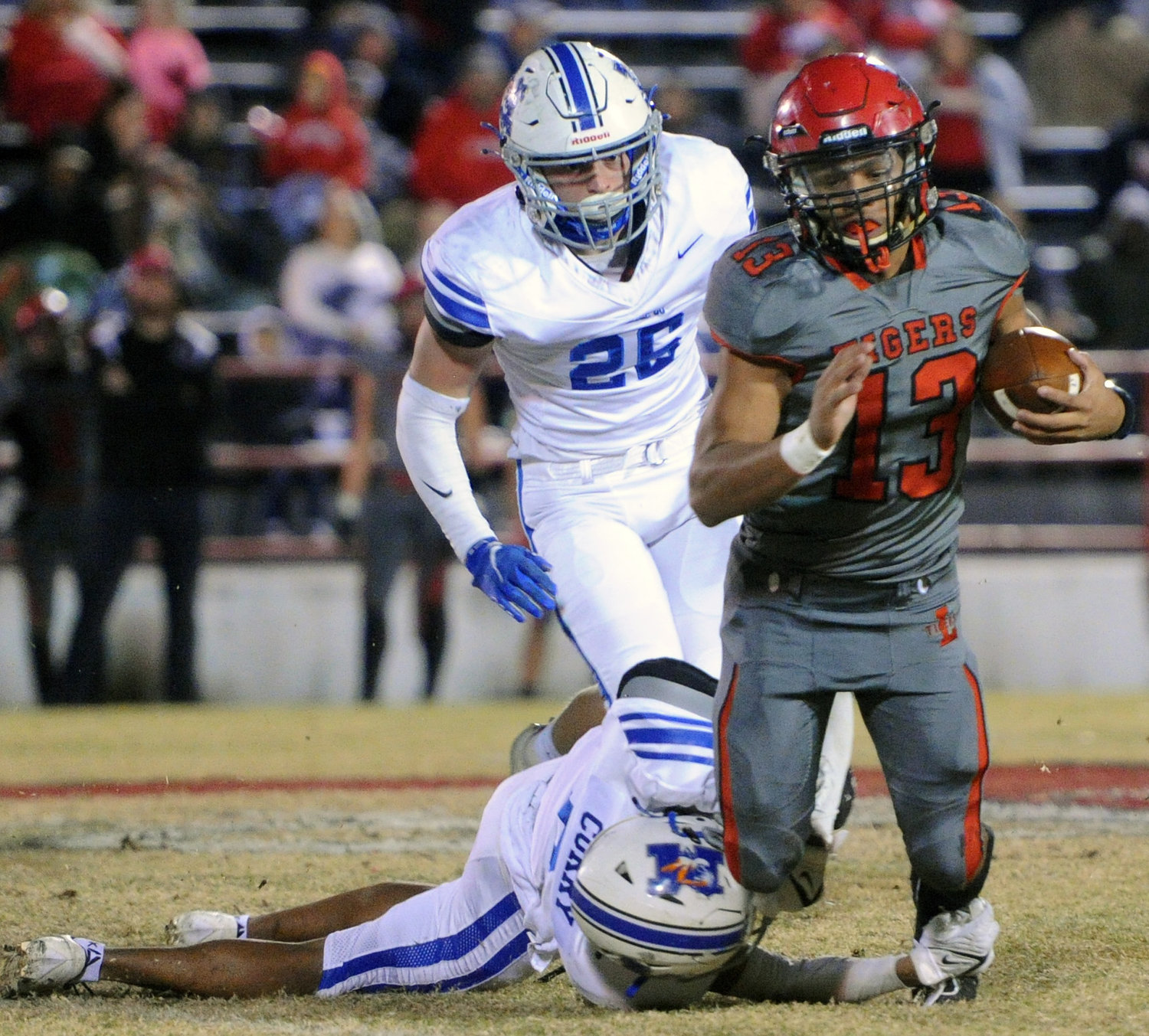 Jakavan Curry (6) and Grayson Miller (26) chase down and stop Jakob Davis for a loss.
T-G Photo by Chris Siers 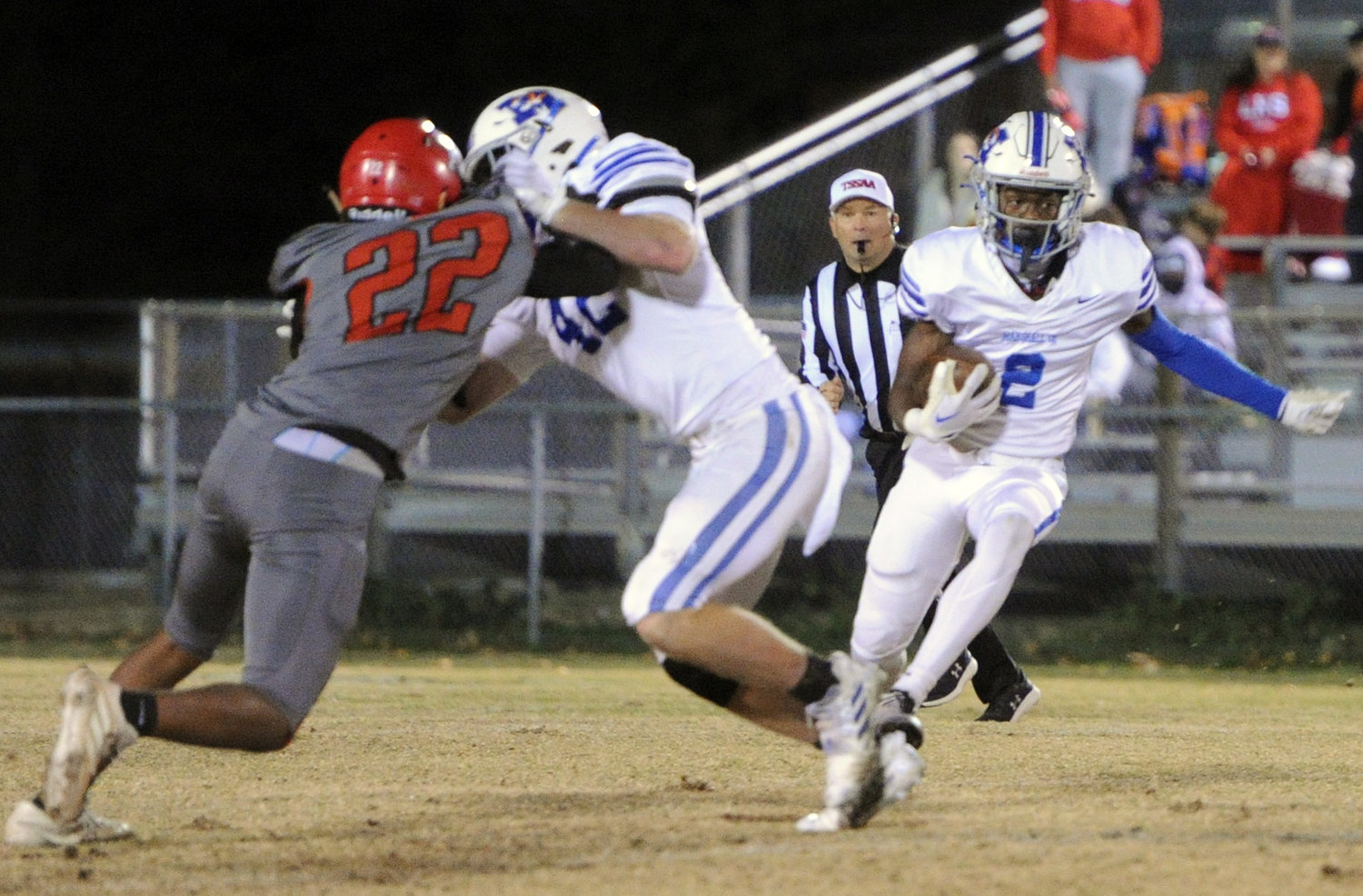 Aja Jones makes a move and picks up a short gain for the Tigers.
T-G Photo by Chris Siers 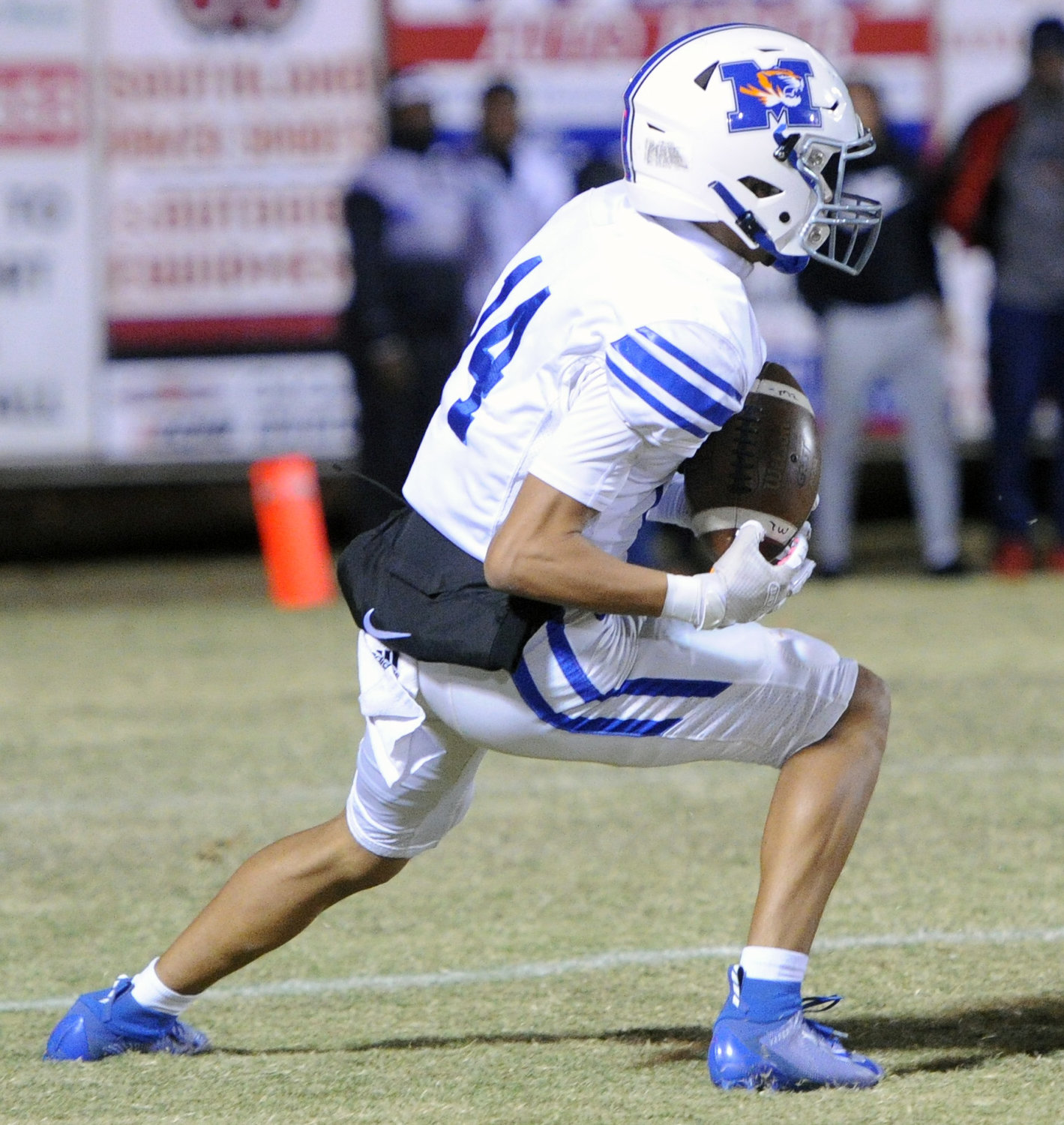 Marcus O’Neal hauls in a 39-yard pass from Silas Teat to knot the at seven apiece after Wyatt Joyce’s extra point.
T-G Photo by Chris Siers 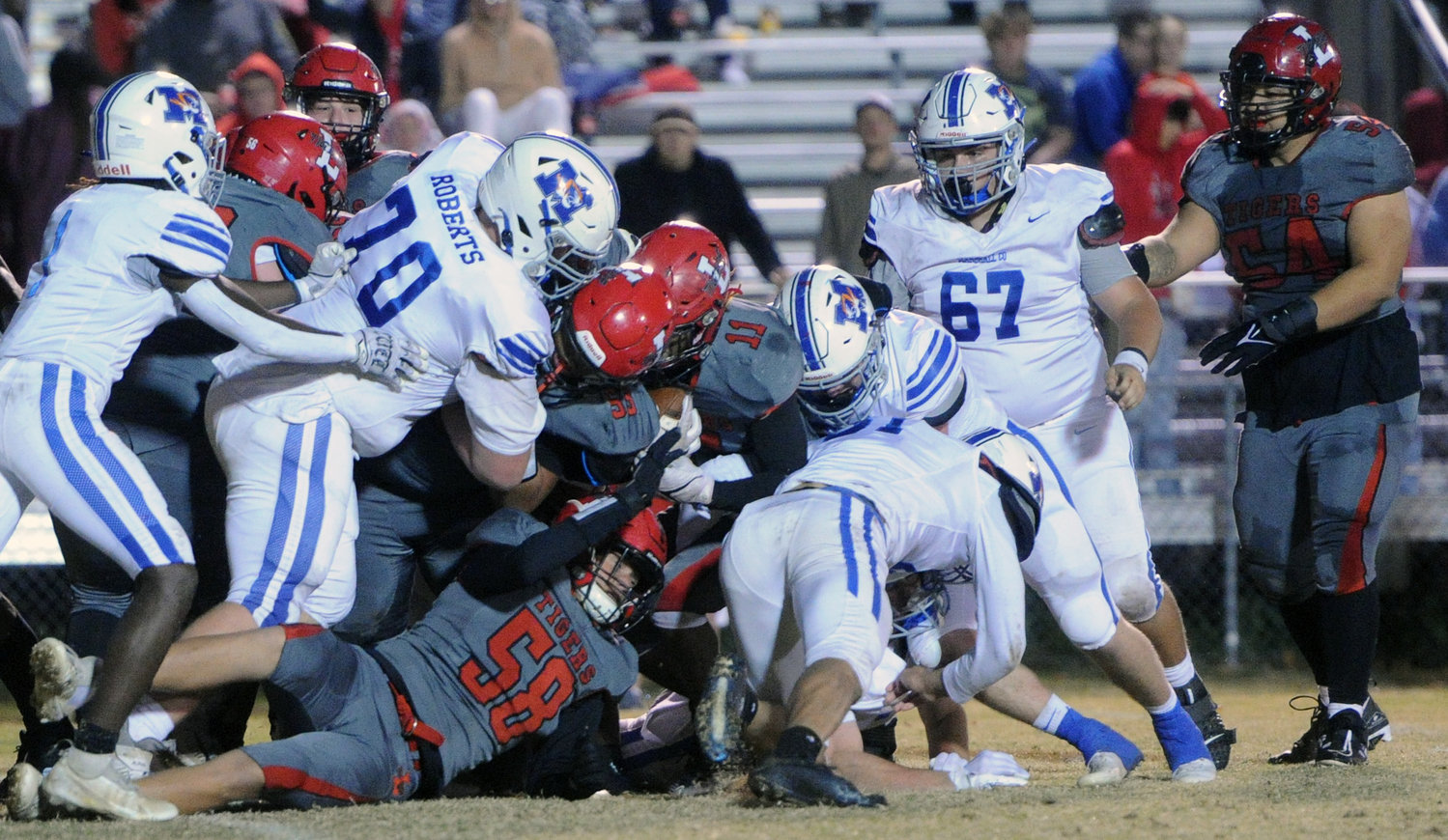 A host of Marshall County defenders jump on the pile to bring down talented Lexington quarterback Isiah McClaine.
T-G Photo by Chris Siers 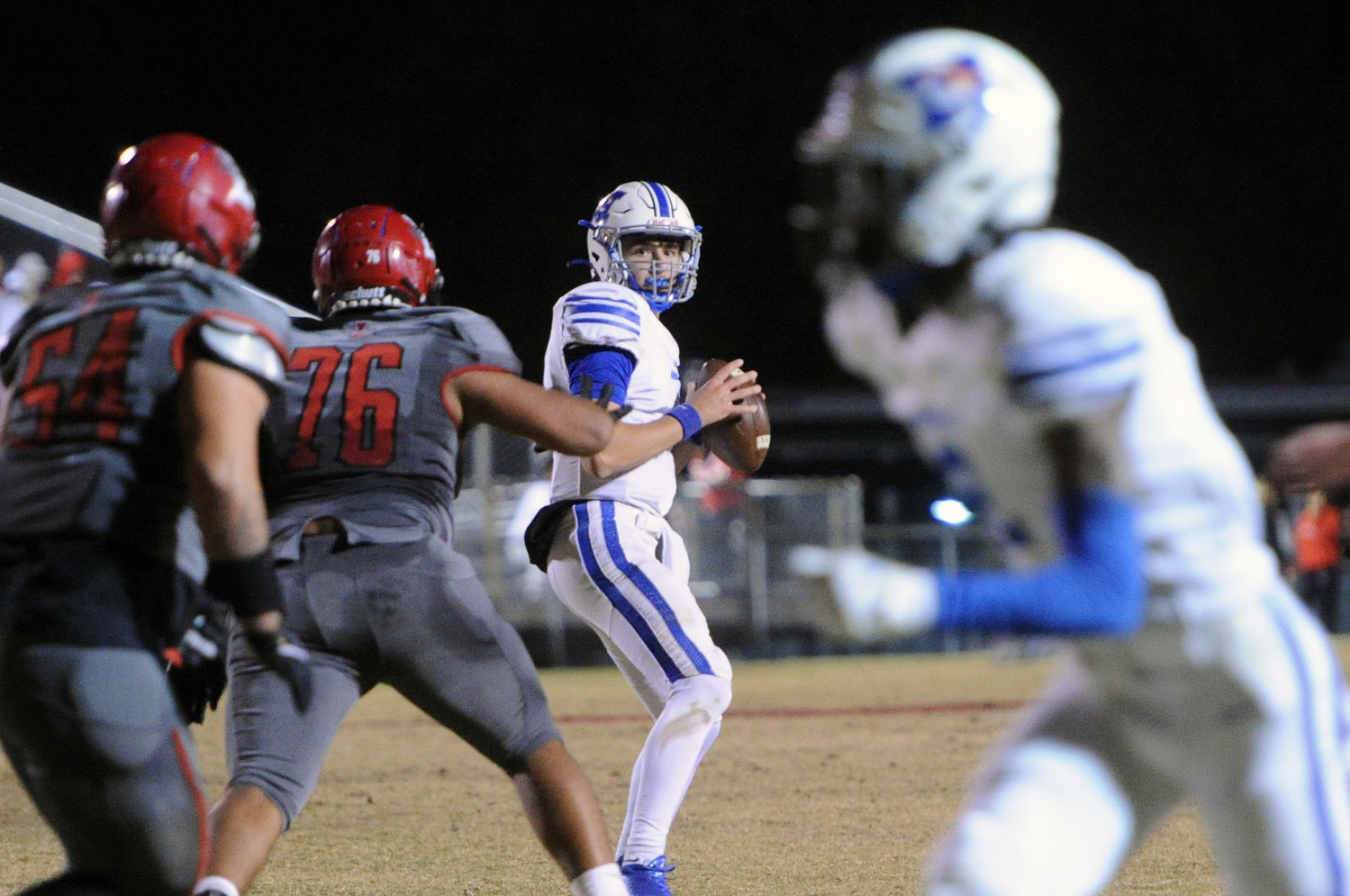 LEXINGTON — What’s been a fantastic season for the Marshall County Tigers (10-2) came to a close on Friday night in the second-round of the Class 4A state playoffs.
Lexington (9-3), the Region 6-AAAA champion, scored 14 fourth-quarter points to end the Tigers’ season with a final score of 21-14.
Lexington’s offense, though unconventional, proved incredibly successful on Friday night.
The Lexington Tigers’ scheme boiled down to lengthy, sustained drives, moving the chains via the run and limiting Marshall County’s possessions.
“First off, hats off to Lexington with some old school, grind it out football. To get a group of kids to buy into that style tells you the type of program coach Hollingsworth has. Big, physical football team with their downhill running game,” Marshall County head coach Thomas Osteen said.
“That being said, I’m really proud of our kids for the way we fought them all night and gave our selves chances. We knew we wouldn’t have a lot of possessions offensively, so we had to make the most of them and didn’t do that. The margin for error is so thin against a team like Lexington.”
Lexington relied on the two-headed monster out of the backfield, featuring Isiah McClaine, who rushed for over 240 yards against Marshall County.
The first possession of the game drained nearly seven minutes off the clock before Marshall County even touched the ball.
While McClaine was able to push the Lexington line of scrimmage into Marshall County territory, a pair of fourth-down penalties forced the home team to punt.
Giving Lexington a taste of its own medicine, Tiger senior Demari Braden helped the Marshall County Tigers press to the Lexington 28-yard line where Wyatt Joyce attempted a 45-yard field goal.
The try, however, was blocked and Lexington eventually converted on that possession with a Jakob Davis 14-yard run.
Marshall County responded in short order with a 39-yard touchdown pass from junior quarterback Silas Teat to Marcus O’Neal to even the score at 7-7 with 4:10 left.
That score held until mid-way through the third quarter.
After Marshall County forced a punt with 8:00 left, the Tigers found themselves deep in Lexington territory.
A 37-yard run by Braden breathed life into the possession and on second and goal from the six-yard line, Teat faked a handoff and darted for the end zone on a bootleg to give Marshall County a 14-7 lead with a quarter to play.
The continued barrage of McClaine pounding the Tiger defense continued to take its toll and the lead was short lived as he was able to punch it in the end zone with 10:22 left in the fourth to knot the game at 14 apiece.
Disaster struck Marshall County on its attempt to answer when the Tigers fumbled the ball into Lexington’s hands on the 25-yard line.
Six plays later, Davis found the end zone on a one-yard run up the middle to score what proved to be the game-winner.
Braden eclipsed the century mark in his final game with the Tigers once again, rushing for 101 yards on 16 carries to lead the Marshall County ground game.
Teat completed 6-of-11 attempts for 69 yards and a touchdown, with O’Neal’s touchdown grab being the longest pass of the night.
Jakavan Curry led the Tigers’ defense with 16 tackles, including a sack, while Thomas Beech added a sack as well.
In total, the Tigers mustered up 204 yards of offense against Lexington.
While the Tigers’ season came to an end in the second-round of the playoffs, it’s been a memorable season on many fronts.
From building a 10-2 overall record, to six-game win-streak to start the season, to locking up second-place in the region standings, Marshall County certainly put forth a stellar season and one of the best records in the surrounding area.
“It’s tough to wrap it up. I’m just going to remember how much fun I had coaching this team. It was fun to come to work every day because these guys wanted to be pushed. They wanted to be coached. You want every season to end in a championship. That being said, Marshall County and Lewisburg has a great group of young men entering the real world. I hope Marshall County football played a small part in shaping their lives,” Osteen said.
For the group of seniors, they leave some big shoes to fill in the coming seasons and they certainly left their mark on the program and community.
“Couldn’t be more proud of our seniors for the way they represented our school and community. It’s the best group I’ve been around in a long time. You want to win so bad for them, it just wasn’t meant to be tonight,” Osteen said.
While the Tigers graduate several players at key positions on both sides of the ball, there’s a healthy number of underclassmen waiting in the wings for their time to shine.
“I feel like we’ve knocked on the door for a long time. We have big group of seniors, but we have a pretty substantial group of underclassmen that played a big role, especially skill position wise. The future of Tiger football is bright,” Osteen said.
Marshall County closes the season with a 10-2 overall record.