LEWISBURG — An early spark and a seven-run fifth-inning helped the Marshall County Tigers shrug off the visiting Wayne County Wildcats on Tuesday night in a 12-5 victory.Tristan Griggs got the … 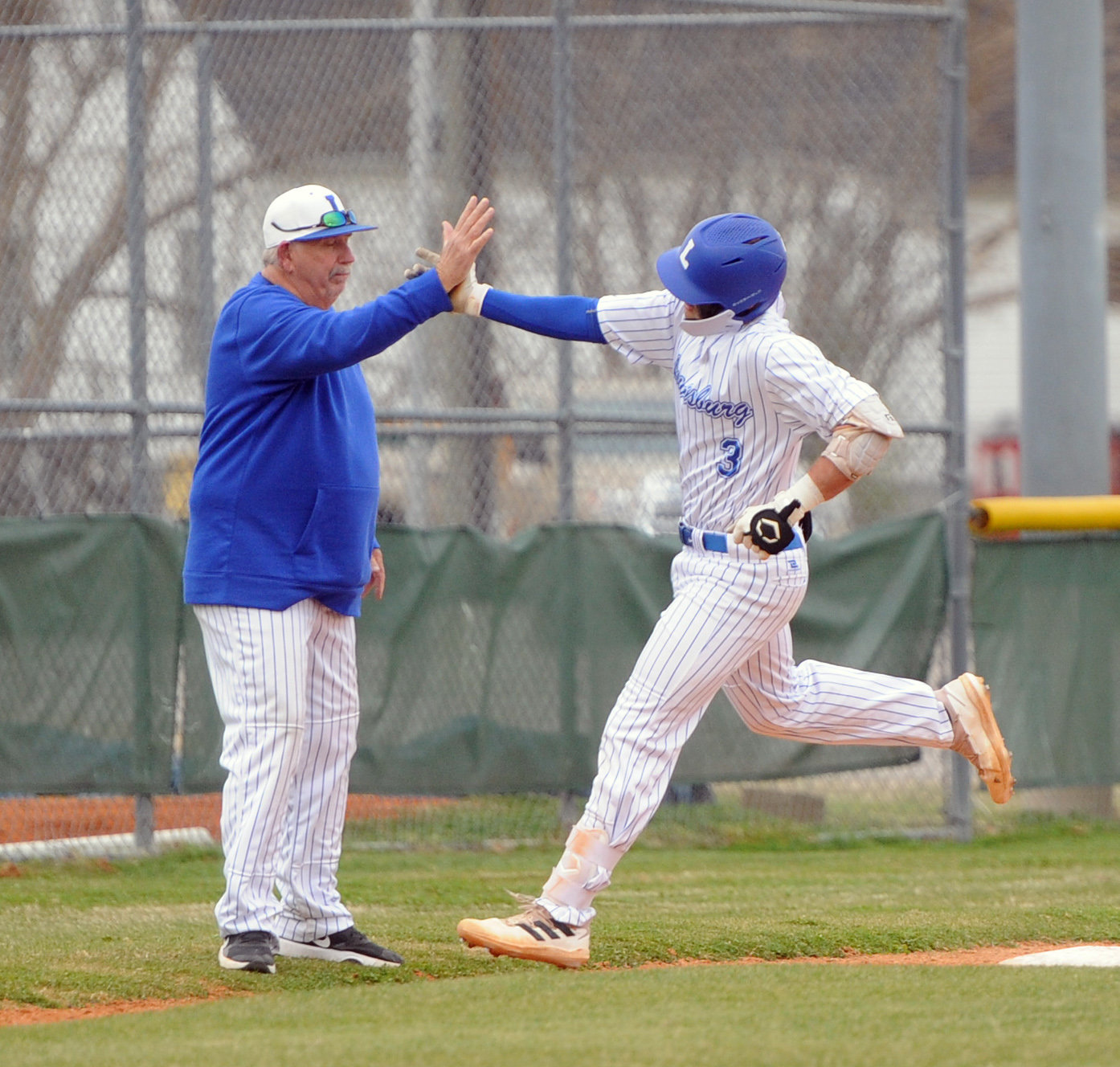 Tristan Griggs catches a high five from coach Mike “Monk” Reese as he rounds third base after mashing a two-run homer to start the Tigers off on Tuesday afternoon.
Tribune Photo by Chris Siers 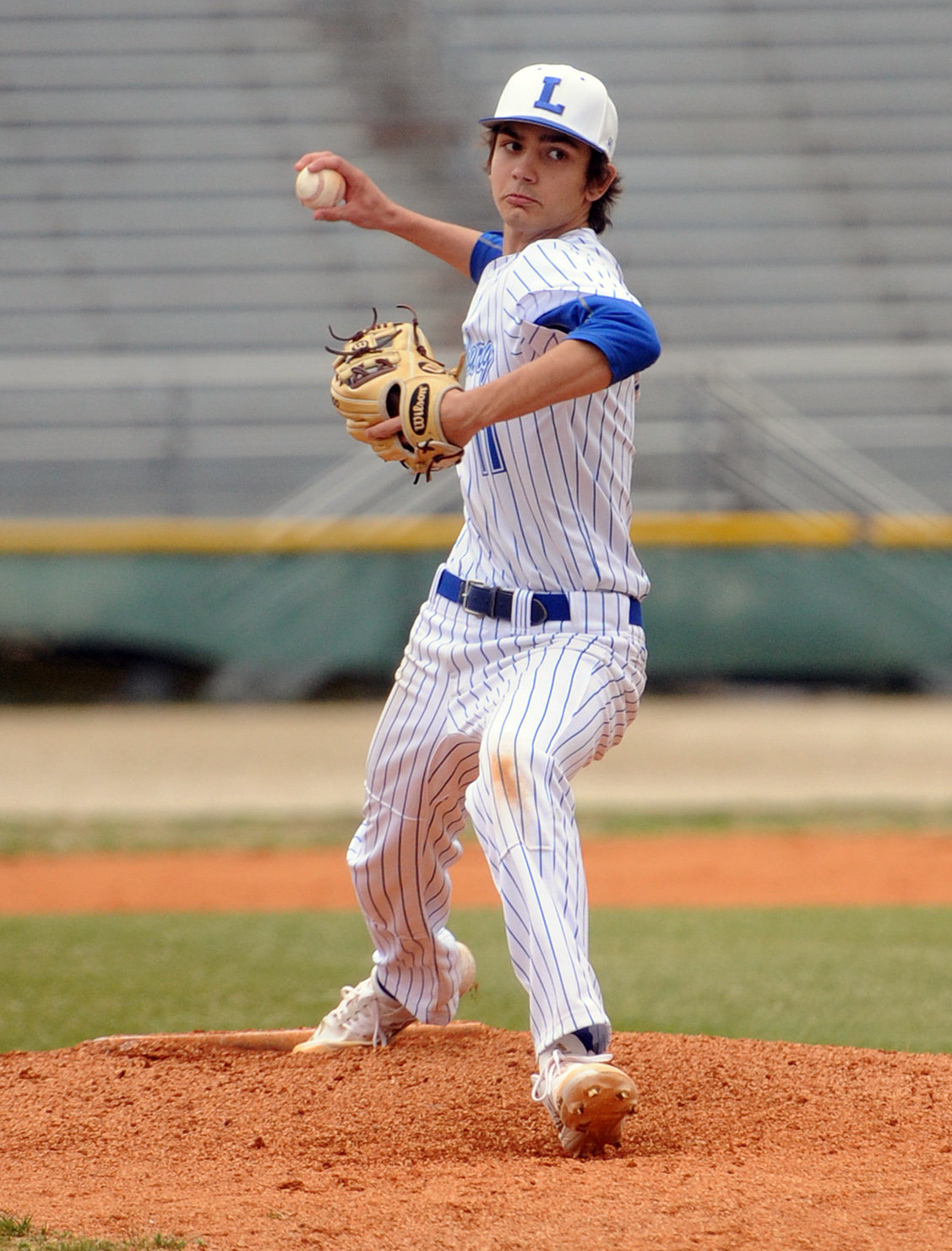 Bailin Luttrell winds up and delivers a pitch against Wayne County on Tuesday.
Tribune Photo by Chris Siers
Previous Next
Posted Thursday, March 17, 2022 11:49 am
By Chris Siers ~ sports@t-g.com

LEWISBURG — An early spark and a seven-run fifth-inning helped the Marshall County Tigers shrug off the visiting Wayne County Wildcats on Tuesday night in a 12-5 victory.
Tristan Griggs got the 11-hit night started on a two-run blast in the bottom of the first inning.
Marshall County went on to add two more runs in the second frame before Wayne County responded with a five-run effort in the top of the fourth inning.
After the sudden outburst in the fourth, the Tigers capped the game by rattling off eight unanswered runs, including a seven-spot in the bottom of the fifth.
In total, Marshall County hammered out 11 hits, with Grigg’s two-run shot in the first being the biggest hit of the night.
Senior Carson Cheek added a double in a 2-for-4 night as well.
Bailin Luttrell got the start on the mound and went fie innings. He gave up four runs on five hits, only two of which were earned, while striking out five.
Eli Cross worked the final two innings in relief and gave up just one hit while striking out one.
In two games so far this week, the Tigers have the offense clicking, piling up 30 runs in the first two contests.
The Tigers will hit the road on Thursday afternoon, weather pending, and travel to Richland for the final game of the week.
First pitch is set for 6:30 p.m.

MCHS 18, HUME-FOGG 1
NASHVILLE — Marshall County got its 2022 season started in a big with, blasting Hume-Fogg 18-1 in Monday night’s opener.
Three different batters for Marshall County recorded four-hit nights, while two more went for two apiece.
Tristan Griggs led the Tigers at the plate, going 4-for-4 with a pair of triples and an RBI.
John Thomas and Trey Warner also had four-hit nights, with Warner driving in four runs in the rout.
Marshall County went for a pair of runs in the top of the first inning, but surrendered a single run to Hume-Fogg in the bottom of frame.
From there, Marshall County added six more runs in the following four innings, highlighted by a three-spot in the fourth.
While the game was well in hand at that point, the Tigers closed the game by plating 10 more runs in the top of the seventh.
Carson Cheek got the start on the bump and went three innings, allowing two hits and striking out six.
Grayson Miller worked three innings in relief, allowing two hits and striking out a pair, while Warner pitched a scoreless frame as well.
Marshall County opens the home slate this afternoon at 5 p.m. against Wayne County.