Tigers double up Macon County in first round road win

The Marshall County Tigers hit the road on Friday for a long trip to Lafayette for a first ever playoff matchup against Macon County (7-3), the number-two seed in Region 3/4A.

And like every other first round matchup with Region 3/4A since Tiger coach Thomas Osteen took the helm in Lewisburg, Marshall County will move on to round two with a 24-12 victory in a game the visitors never trailed.

Tigers double up Macon County in first round road win 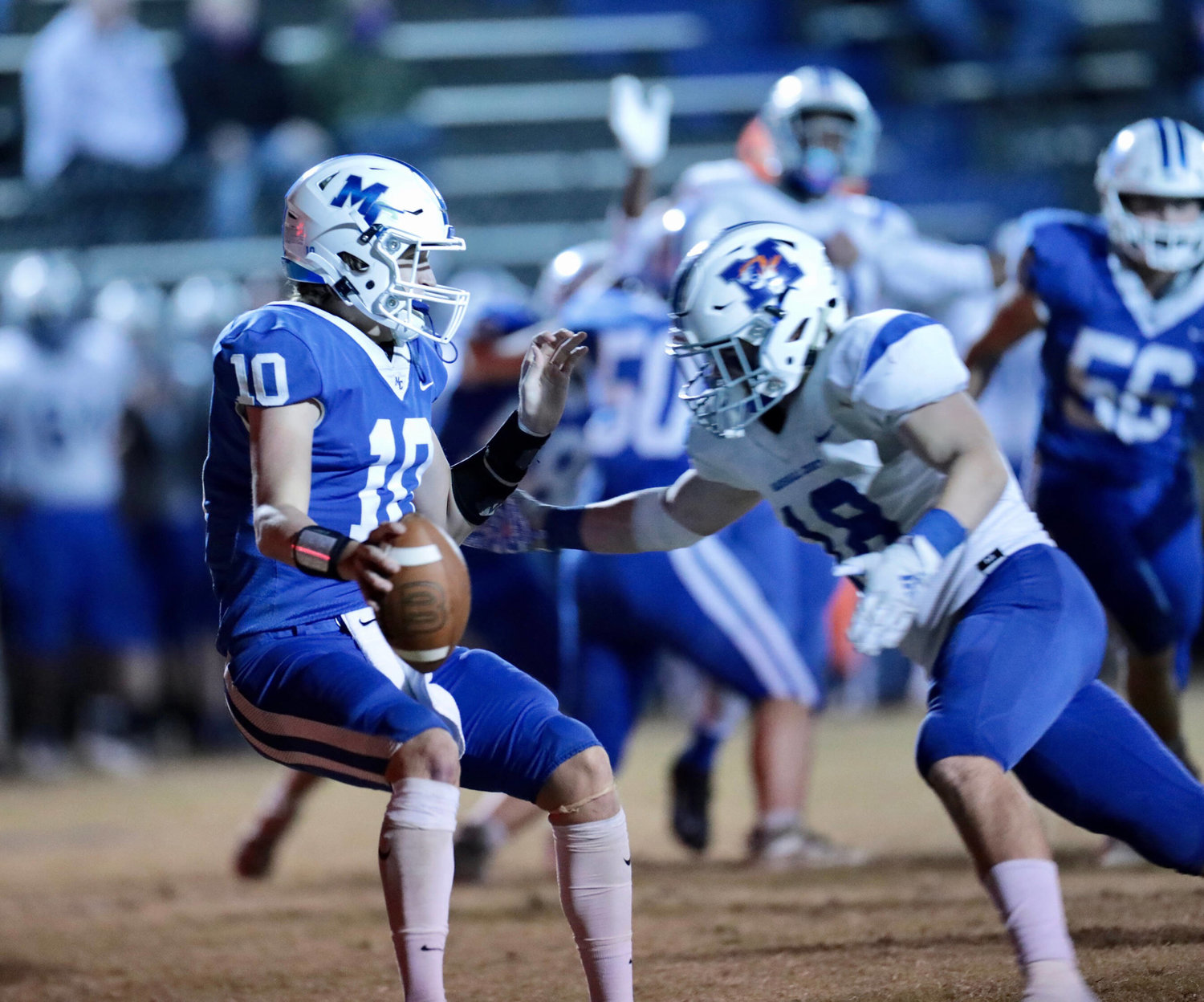 Marshall County’s Christian Stacey (18) breaks through for a sack on Macon County quarterback Braydee Brooks (10) in the Tigers’ 24-12 win at Lafayette Friday night in the first round of the Class 4A playoffs.
Tribune photos by Matt Mizner 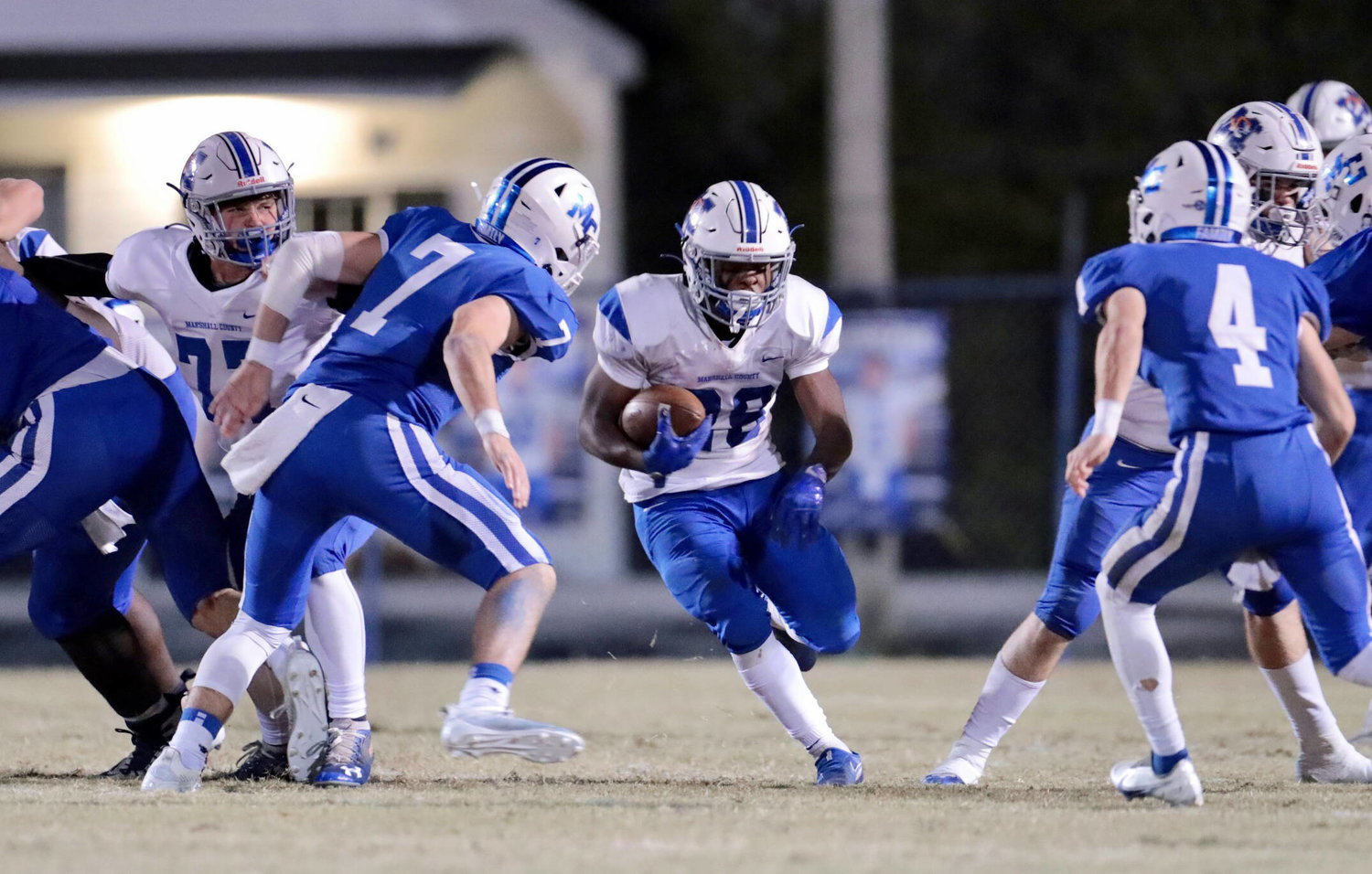 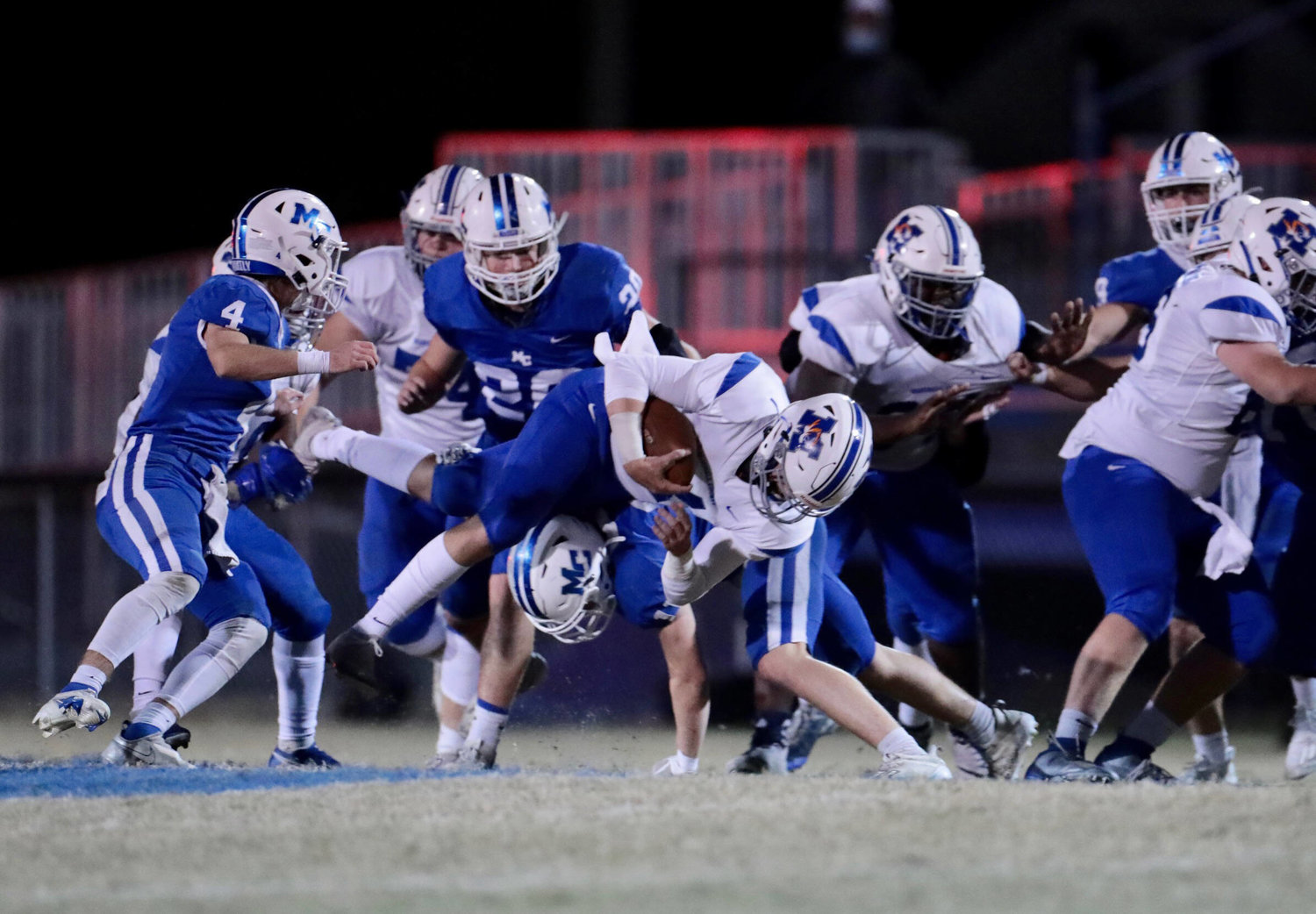 Marshall County quarterback Bryson Hammons busts over the goal line for a touchdown. 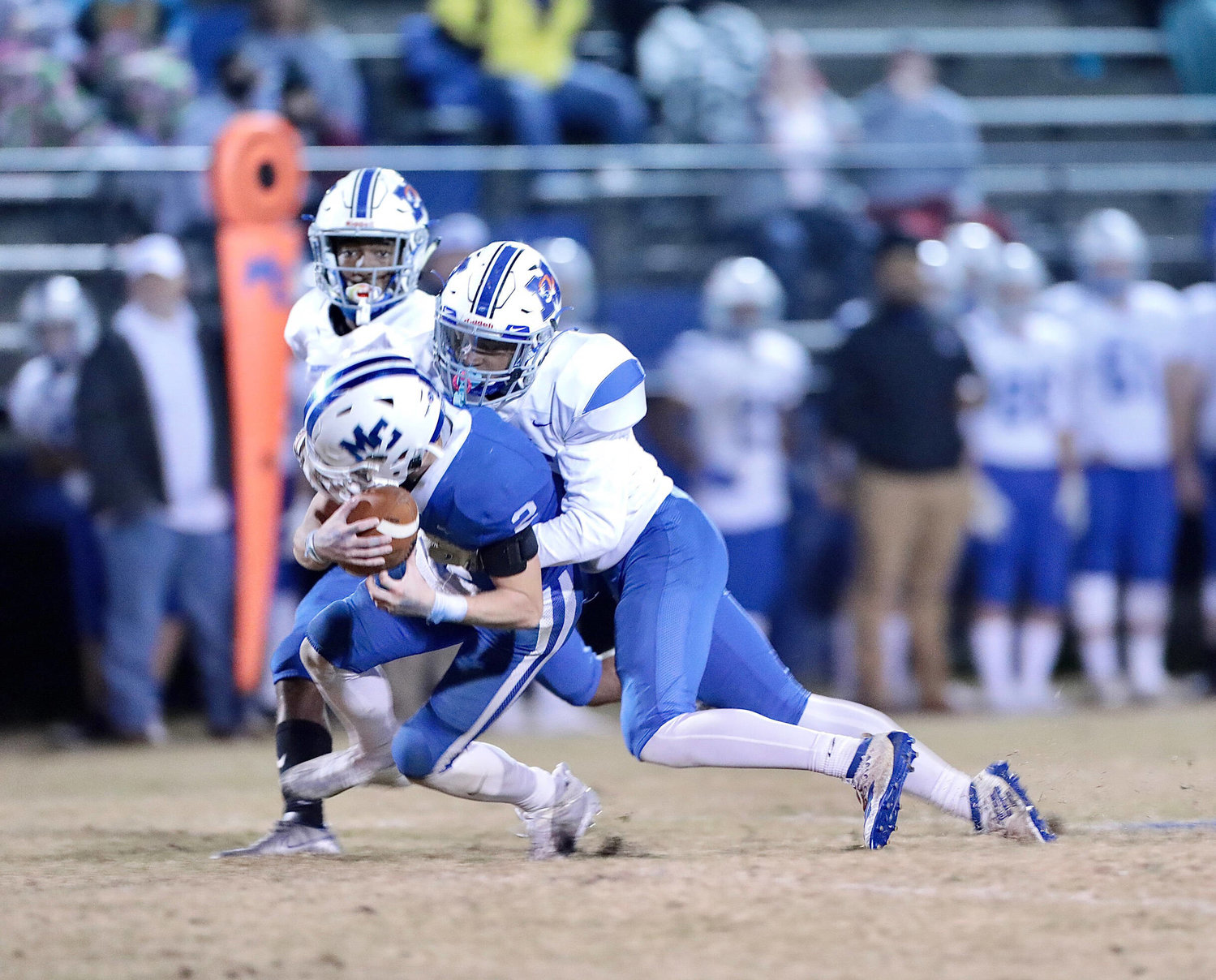 Marshall County’s Lamrion Pierce comes up to make a solid tackle on a Macon County receiver. 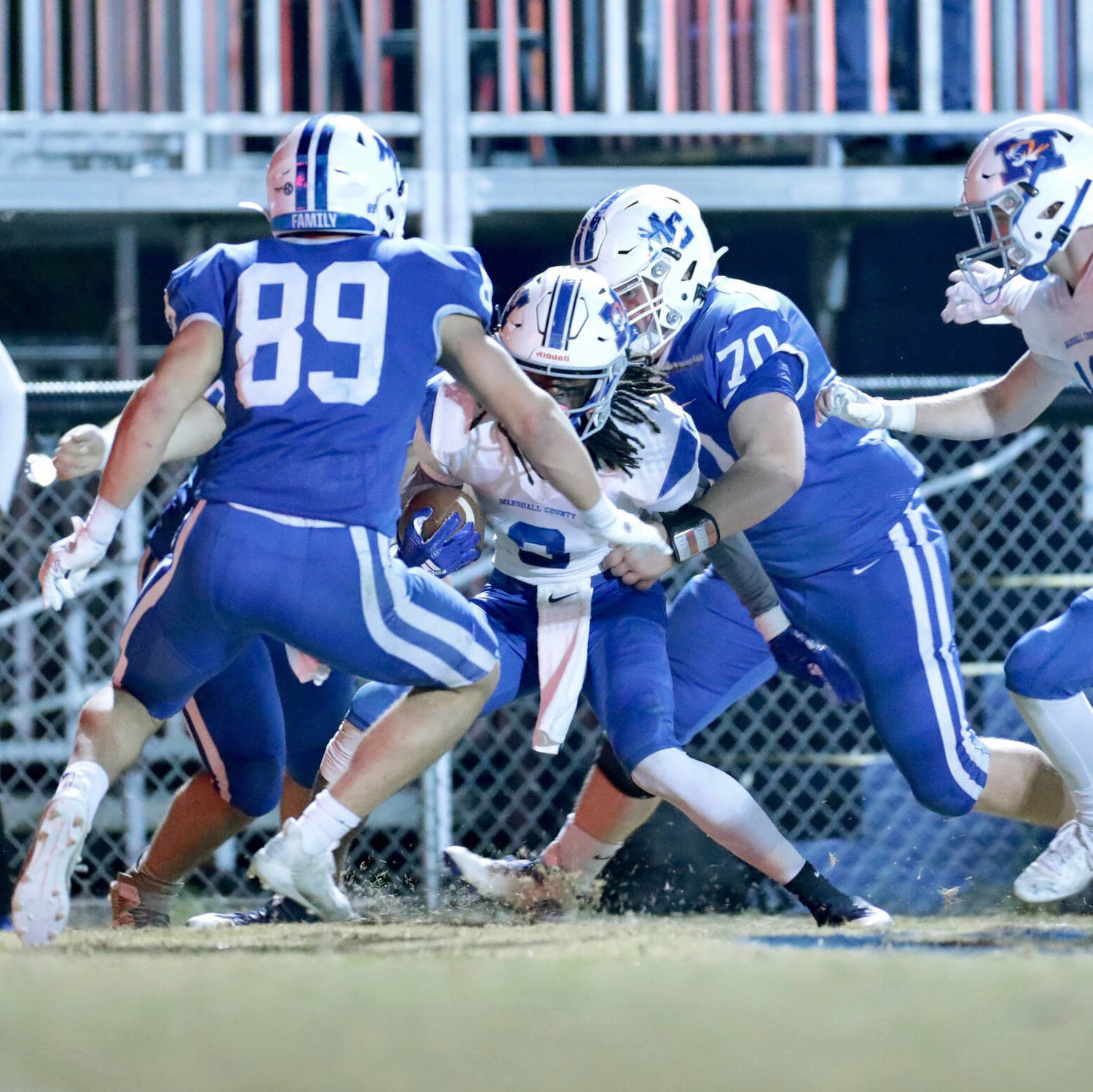 Devonte Davis, who had two pass receptions for 48 yards and a touchdown, gets bottled up by several Macon County defenders.
Previous Next
Posted Tuesday, November 10, 2020 11:00 pm
By Mike Inglsbee Tribune Correspondent

The Marshall County Tigers hit the road on Friday for a long trip to Lafayette for a first ever playoff matchup against Macon County (7-3), the number-two seed in Region 3/4A.

And like every other first round matchup with Region 3/4A since Tiger coach Thomas Osteen took the helm in Lewisburg, Marshall County will move on to round two with a 24-12 victory in a game the visitors never trailed.

"Our motto all week was find a way to be 1-0 at the end of it," Osteen stated. "We challenged our guys to match Macon's physicality as that was their M.O."

"I felt it was the most efficient we have played on offense all year, our Special Teams were special like they have most of the year, and our defense really rose to the challenge of playing an offense that had scored a lot of points all year," Osteen added.

The win earned the Tigers a rematch against region champion and top-ranked Tullahoma, who easily beat Region 3/4A four-seed Stone Memorial.

The Tigers go on the road once again this Friday but the long trip gave Marshall County an advantage the past weeks according to coach Osteen.

"We stressed to treat it as a business trip," Osteen explained. "I think we took advantage of the trip to get our minds focused completely on the task at hand."

"Luckily we have established an expectation that making the playoffs and competing well in them are the expectation here and we have a lot of older guys that have played a good bit of playoff football," Osteen added.

Osteen now holds a 6-1 first round record at the southern Middle Tennessee high school with a with a 6-0 first round record against 3/4A opponents as Region 4/4A continued the trend of dominance over 3/4A with Marshall County, Tullahoma, and Nolensville all easily advancing to the second round.

Fourth-seeded Spring Hill (3-8) is the only Region 4/4A team not advancing following an easy win by Region 3 champ DeKalb County (7-4).

"I think it just speaks to the quality of programs, talent, and coaching that we have here in the mid-state," Osteen pointed out. "Traditionally our region and non-region schedules have been much tougher than what most teams on the plateau face on a yearly basis."

The Tigers jumped out early versus Macon County, surprising the home team Tigers with a couple of first half pass plays from junior quarterback Bryson Hammons to two of his biggest playmakers.

Marshall County scored the only first quarter points by either team on a 23-yard Hammons to Pierce pass to take an early 7-0 lead, following the Jon Estes PAT.

Macon County answered to start the second quarter on a touchdown run, but a missed PAT allowed Lewisburg to hold the lead.

Marshall County then extended its one-point advantage on a brilliant touchdown pass from Hammons to Devonte Davis that covered 38 yards and pushed the Tiger lead to 14-6.

Marshall County added a bit of breathing room before the break when a stalled drive allowed Estes to come in and drill a 42-yard field goal, the kicker's sixth of the season on nine attempts, for the 17-6 halftime lead.

Starting the second half with a slight 11-point edge, Marshall County put the proverbial nail in the Macon County’s coffin in the third quarter by putting together an impressive 15-play touchdown drive that took an incredible 10 and a half minutes off the clock and culminated with a Hammons three-yard touchdown plunge for the 24-6 lead.

"Fortunately we were up two scores at the half," Osteen recalled. "We really felt that if we could come out after half and make it a three score game it would be tough for their Wing-T based offense to catch up."

"Our offensive line played their best game of the year," Osteen continued. "Demari Braden was a workhorse all night. It’s probably the most proud I have been of our offensive unit all year."

Macon County tacked on one more score on a Brady Brooks touchdown run with eight minutes remaining, but the points were too little too late and Marshall County advanced to the second round for the sixth straight campaign.

Bryson Hammons remained the steady hand of the offense with 8-of-14 completions for 112 yards and two scores.

The junior signal caller has now thrown for 1,313 yards 16 touchdowns and just six interceptions in 2020.

The early passing game success opened up the running attack as Demari Braden shouldered the load with 94 yards on 25 carries while Pierce chipped in 23 yards on four attempts.

A'Ky Howard, who leads the Tigers with 34 catches on the season and holds 11 scholarship offers, led the air attack with three catches for 21 yards while both Davis and Pierce each added two catches and senior Hunter Rolof added one catch for five yards.

"It's been an honor to be the leading receiver on this team," Howard stated. "This team's balance on offense is great. We have playmakers everywhere, no matter who has the ball in their hands. We will get five yards or even more because that's what we live to do."

The defense was the led by the usual suspects with Davis and Hayden Sheppard each finishing with eight tackles and Chandler Davis and Christian Stacey each added seven stops.

Stacey also finished with a sack for a big loss of 13 yards to go along with two quarterback hurries.

The Tigers now turn its attention to Tullahoma, who routed Marshall County 42-7 at home in front of a statewide TV audience on September 4.

Tigers’ fans can find some solace in knowing the Tigers were only down 7-0 with one minute remaining in the first half of the Week 2 loss.

The Tigers have showed they can play with the Wildcats.

"It's gonna be a monumental challenge, but our kids have been itching all year to get back to," Osteen said. "I know they will put in a great effort all week to get ready to play. The only way you can take on an elephant like Tullahoma is one bite at a time!

Since the two teams joined regions, the Tigers own a 4-3 record over the Wildcats with two Tullahoma wins coming in 2018, a 14-13 regular season loss before Tullahoma eliminated Marshall County from playoff contention via a 16-14 loss in Tullahoma.

Tullahoma has made a remarkable turnaround the past six seasons.

The Wildcats are led by Mr. Football finalist Jakobe Thomas, who rushed for 12 TDs, caught five scores and had a punt and kick return touchdown in 2020.

Quarterback Ryan Scott has also put up steady numbers, throwing for 1,078 yards, 13 scores and just four picks while rushing for another 335 yards and seven scores.

However, the Tigers limited Scott to just 50 passing yards in the first meeting, but Thomas made up the difference with 108 yards on the ground.

In order for the Tigers to keep the season alive, the passing game will be a key component.

“(The passing game) will be a key in the game plan this week," Howard explained. "Tullahoma has no weak points or spots in the box or secondary."

"The key to the win is to spread them out, up-tempo offense and an amazing game from the offensive line," Howard added. "We do those things and it should be a shootout the whole game!"