LEWISBURG — Beating the defending state champion is impressive enough on its own.Going on a 42-0 run to reach a running clock by the end of the third quarter is a statement … 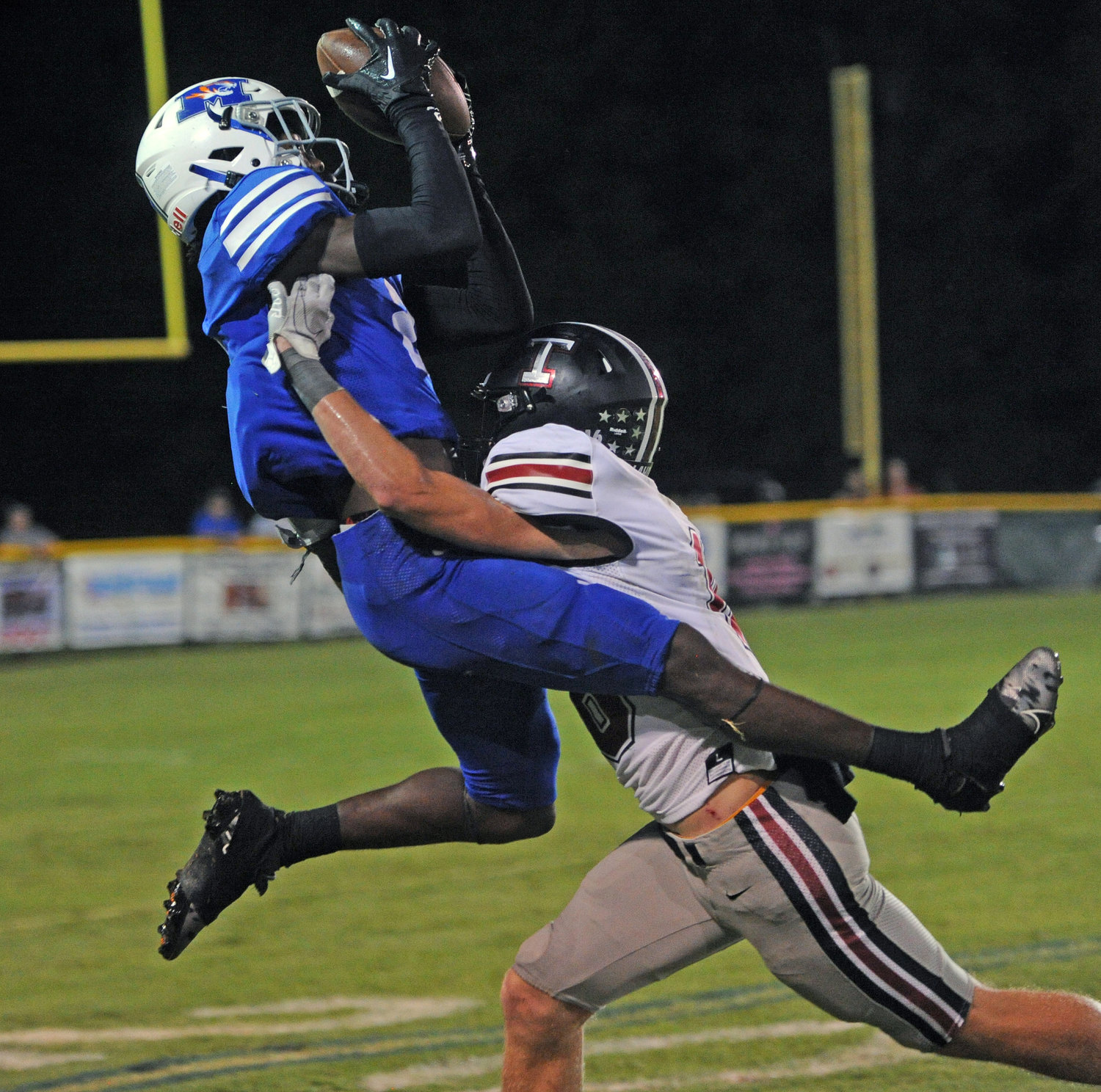 Aja Jones makes an acrobatic catch on an 18-yard pass by quarterback Silas Teat to set up a Marshall County touchdown in the third quarter.
Tribune Photo by Chris Siers 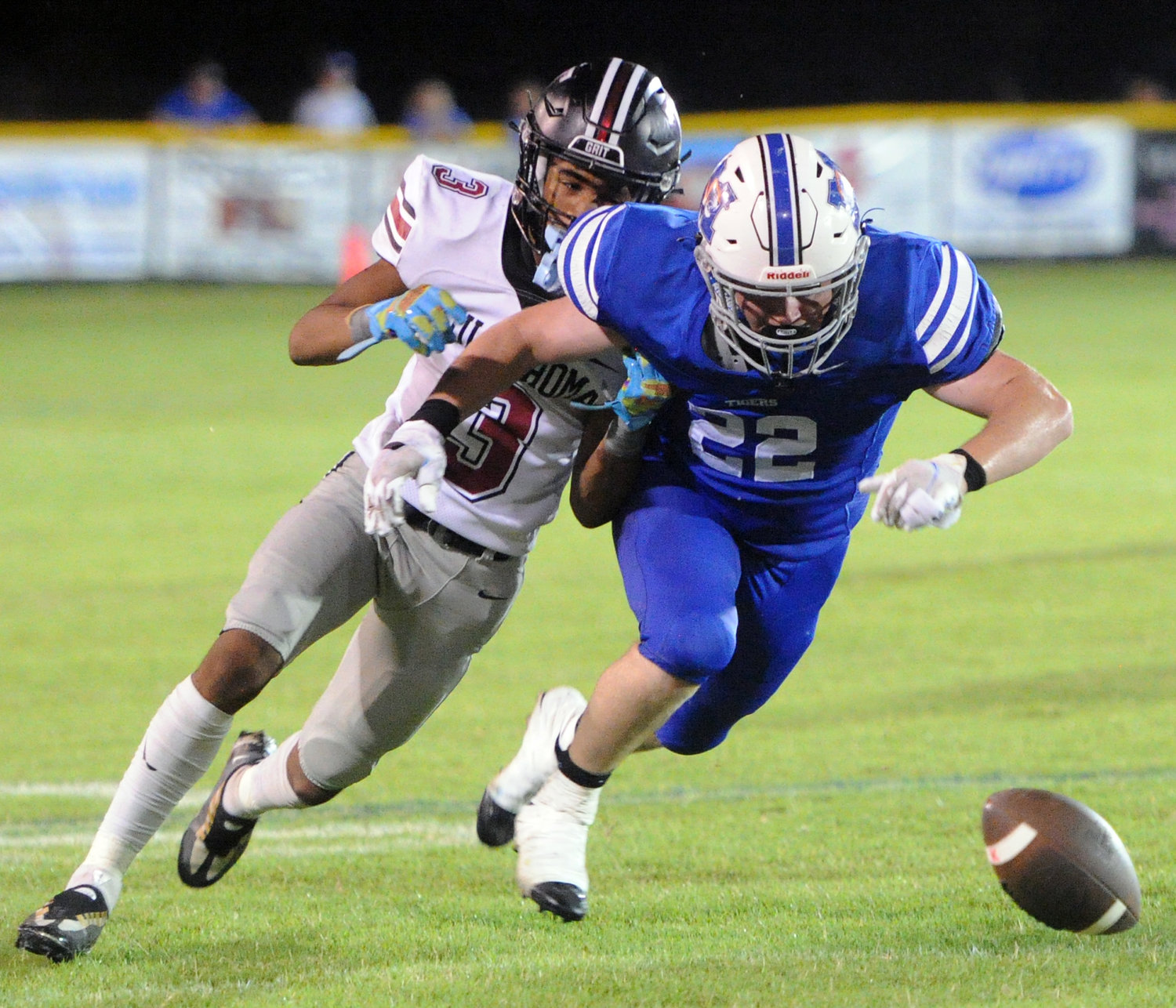 Thomas Beech dives on an onside-kick by Tullahoma and recovers possession for the Tigers on the 40-yard line.
Tribune Photo by Chris Siers 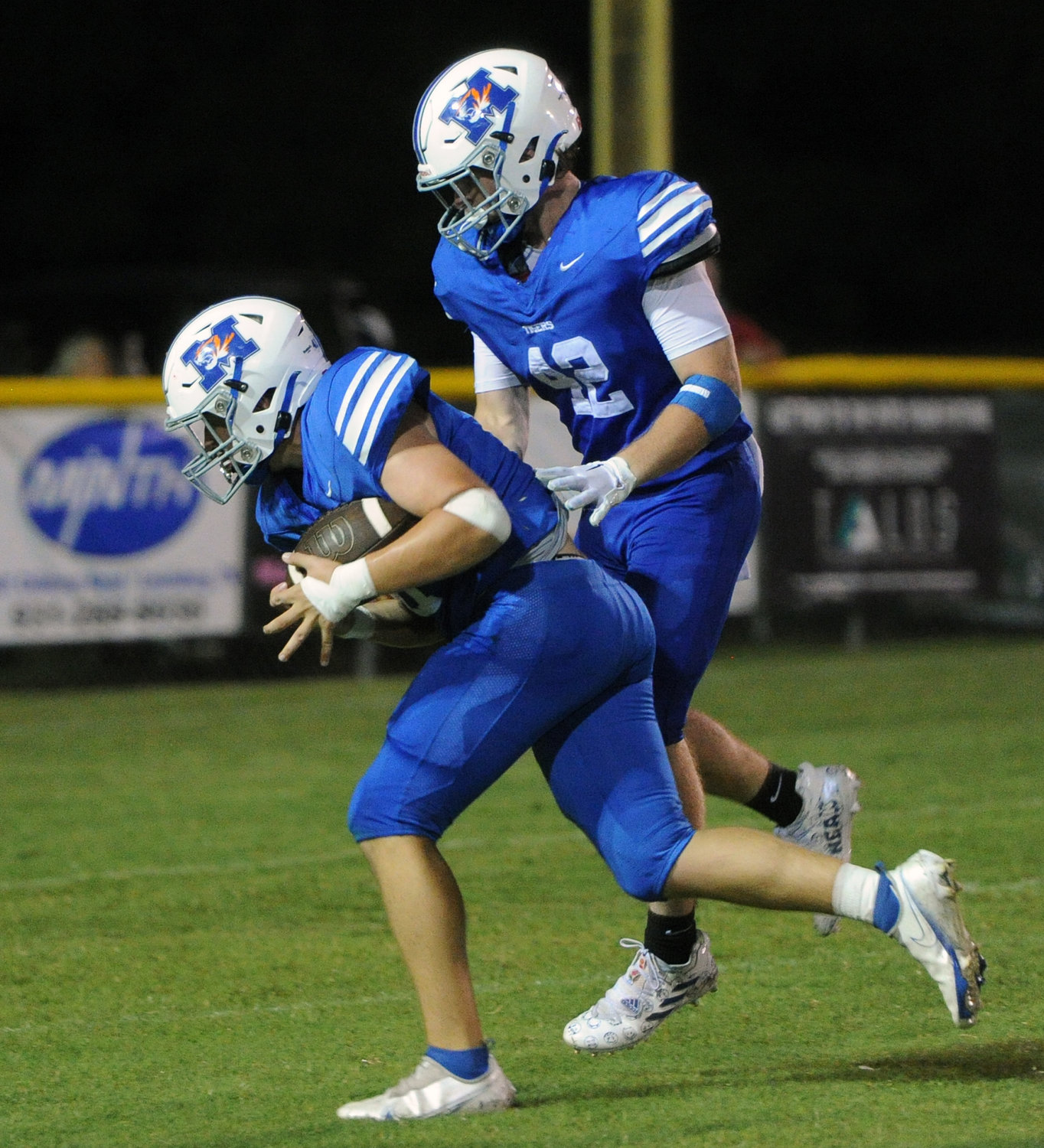 Brock Anderson scoops the ball on a Tullahoma fumble and scores from four yards out after a sack by Trey Warner.
Tribune Photo by Chris Siers
Previous Next
Posted Saturday, September 10, 2022 3:20 pm

Our defense, after that first drive, really played well, put pressure on their quarterback and made every yard tough for them.”
Marshall County coach Thomas Osteen
By Chris Siers ~ sports@t-g.com

LEWISBURG — Beating the defending state champion is impressive enough on its own.
Going on a 42-0 run to reach a running clock by the end of the third quarter is a statement win.
That’s just what happened for the Marshall County Tigers (4-0, 2-0) on Friday night in their 42-7 thumping of defending Class AAAA state champion Tullahoma.
“We’re just so proud of our kids. They (Tullahoma) are not the same team they were last year, but we’re thrilled our kids won a big game in convincing fashion against a really good program,” Marshall County coach Thomas Osteen said.
Friday’s game got off to an odd start for the Tigers, with the Marshall County offense not seeing the field for over 10 minutes of game time, thanks to a pair of lengthy Wildcat drives and some special teams magic courtesy of Tiger sophomore Aja Jones.
Tullahoma (1-2, 0-1) took the game’s opening drive 80 yards over nearly five minutes to the end zone to strike first on a Nathan Delaughter four-yard strike.
On the following kickoff, Jones took the kick return 96 yards to the house, evening the score after Wyatt Joyce’s successful kick after.
The Wildcats’ second drive began on their own 20-yard line again, but it was a fake punt on fourth down that allowed Tullahoma to move the chains.
The drive eventually stalled and allowed the Tiger offense to finally get on the field.
Marshall County’s first possession, however, went nowhere and a after a false start on fourth down backed the Tigers up, Osteen opted to punt.
Tullahoma muffed the reception and the Tigers took over on the Wildcat four-yard line, which set up the go-ahead score which came on a four yard toss by Teat to Jayden Randolph.
Marshall County did not trail again.
“Our defense, after that first drive, really played well, put pressure on their quarterback and made every yard tough for them. Then offensively, we got going a little bit in the third quarter,” Osteen said.
Neither team was particularly effective in the second quarter, but it was the Marshall County defense that didn’t allow the Wildcats to move the chains once in the frame.
That 14-7 score held through the remainder of the half, but in the third quarter, everything flipped on a dime for the Tigers and the earlier miscues and penalties were cleaned up.
Kicking off a 28-point third quarter, the Tigers opening drive of the second half went 75 yards and was capped by a quarterback sneak into the end zone by Teat, bumping the Marshall County lead to 21-7 after Joyce’s successful kick.
Forcing a punt on the following Wildcat drive, Marshall County needed just five plays before senior tailback Demari Braden sliced into the end zone, coming just 3:21 after Teat’s sneak.
With Braden’s score making it a 28-7 lead for the home team, it was the Marshall County defense that answered the bell as the game continued to stretch into the third quarter.
The Tigers’ defensive front continued to wear down the Wildcat offensive line, allowing Marshall County to pressure Delaughter in the backfield.
On the Tullahoma 28-yard line, it was the tandem of linebacker Trey Warner and defensive end Brock Anderson that broke through and came up with the next score for Marshall County.
Warner, who had been a terror in the Wildcat backfield, sacked Delaughter, forcing a fumble that took a Tiger bounce and Anderson was able to scoop and score from four yards out.
“Those kids are such great kids. Trey Warner has played a ton of football for us and is having a great year at linebacker. Anderson—that’s one of the reasons you love high school football. He’s a kid that gets everything out of his ability. What a great memory he will have for the rest of his life,” Osteen said.
Marshall County got one final score in the third quarter after forcing a punt with 31 seconds left and it was Teat again going to the air, this time connecting with Randolph for the second time, this time on a 39-yard touchdown pass for the final score of the night to reach a running clock.
But as lop-sided as the final score was, Osteen feels his team’s best football is still ahead of the Tigers.
“I don’t think we’re close yet and I think it’s evidenced by how we started the game. We have a bunch of good pieces. We can compete on offense. We can compete on defense. On special teams, we can compete. I don’t think we’re close to playing our best game. As a coach, you want to get that each week, but I feel like if we keep getting better, we can be a tough team to beat by the end of this year,” he said.
Teat completed 11-of-17 passes for 145 yards and a pair of scores—both to Randolph.
As a team, the Tigers managed just 69 rushing yards, with Antomme Cowthorn’s 34 yards on six carries leading the team.
Marshall County totaled 214 total offensive yards.
The win marks the second region victory of the season for the Tigers.
Next week, Marshall County will host Hillwood, who is fresh off its first win of the season over Montgomery Central.