The Marshall County Tigerettes, coming off a losing effort in their season opener against Hickman County on Tuesday night, hosted the Fayetteville City Lady Tigers in a Hall of Champions Contest at the Dottie Kelso Memorial Gymnasium in Lewisburg Thursday night... 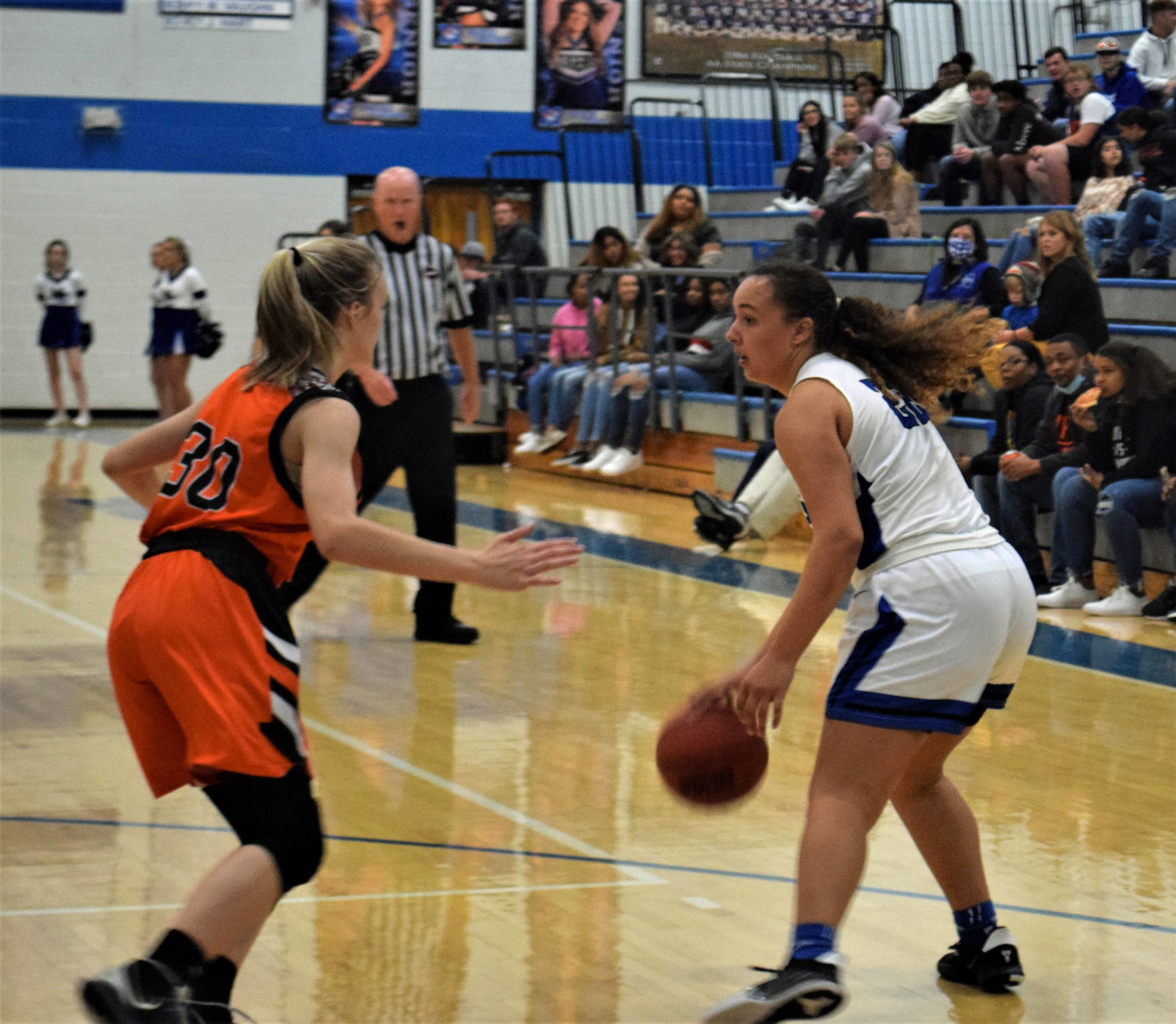 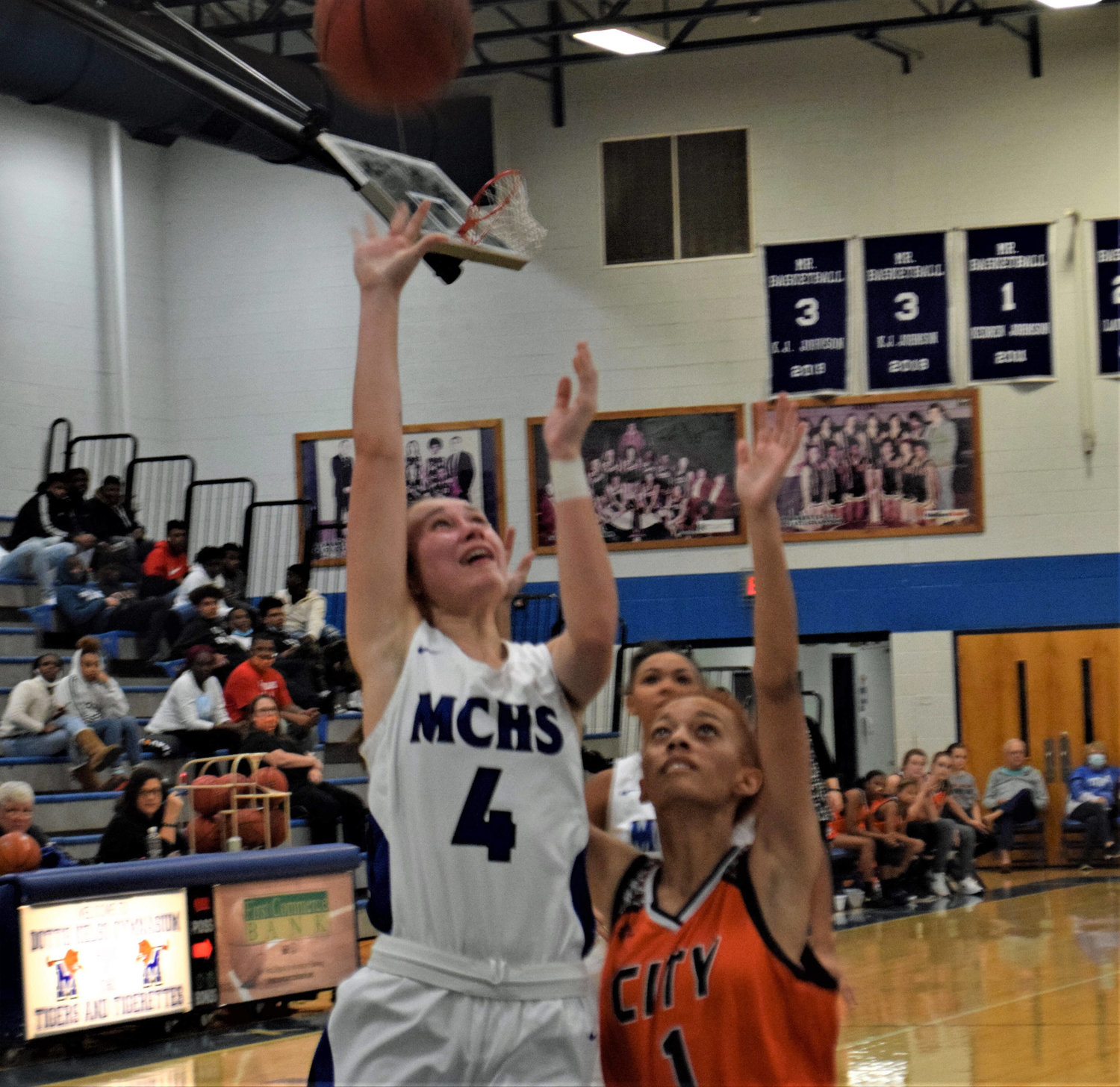 Senior Karlye Wiser (4) soars in for a layup for two of her team-high eight points versus the Lady Tigers.
Previous Next
Posted Tuesday, November 24, 2020 11:00 pm
By Dennis Holley Tribune Correspondent

The Marshall County Tigerettes, coming off a losing effort in their season opener against Hickman County on Tuesday night, hosted the Fayetteville City Lady Tigers in a Hall of Champions Contest at the Dottie Kelso Memorial Gymnasium in Lewisburg Thursday night.

Buoyed by a strong fourth quarter, Fayetteville City won 36-22 and were led by University of Arkansas-Little Rock signee 6’-3” Za’Naria Robinson, who scored 10 points to go along with a game-high 13 points by Gracie Hoagland.

“It was a tough game, not the way we want to play,” MCHS head coach David Steely said about the four-time state champion Tigerettes. “We had a lot of trouble offensively, we are not together right now, we do not trust each other and we are still getting used to each other.”

“We need more balance. We only got nine players and it is hard to practice 5-on-5. The last game (Hickman County) was the first time we played 5-on-5 this season.”

Wiser struck first for MCHS with a long three-pointer, but Robinson came back with an inside bucket to make the score 3-2.

Both teams showed early season jitters as shots would not go in and a late bucket by Crutcher gave the Tigerettes the lead at the end of the first quarter, 5-2.

In the second quarter, Hoagland warmed the nets up with two free throws, then added two 3-pointers to give the Lady Tigers a five-point lead at 10-5.

Hurt canned a basket for the Tigerettes, but Fayetteville City’s Shaneka Nance and Robinson answered to push the Lady Tigers’ lead to seven points at 14-7.

Hollingsworth nailed a 3-pointer for MCHS before Nance answered with a bucket to push the lead to six points for the Lady Tigers.

Crutcher sank a mid-range jumper to finish the scoring in the first half as MCHS trailed by four points, 16-12 when the buzzer sounded.

The third quarter saw the Tigerettes fighting to make a comeback with Wiser adding a basket and a free-throw while Crutcher made a bucket and Hurt added a foul shot.

Hoagland canned another 3-pointer and Amaria Thomison added a bucket and with free throws by Hannah Lataker and Nance, the Lady Tigers stretched their lead to six points at 24-18 at the end of the third quarter.

The Tigerettes, perhaps showing some leg wariness from two games in three days, could not get shots to fall against a stingy defense threw up by Fayetteville City as Wiser and Crutcher scored the only two baskets in the fourth period.

“We’ve got to play better but we’ve got good kids with good character and we’ll respond against Columbia Tuesday night,” Steely said.

Asked if the pandemic has been a problem to start the year Steely said, “We didn’t have camp or scrimmages, but no one else did either, but with a new blend of girls this year that has hurt us.”

Note: The Tigerettes dropped a close one at Columbia last night by the score of 40-38.