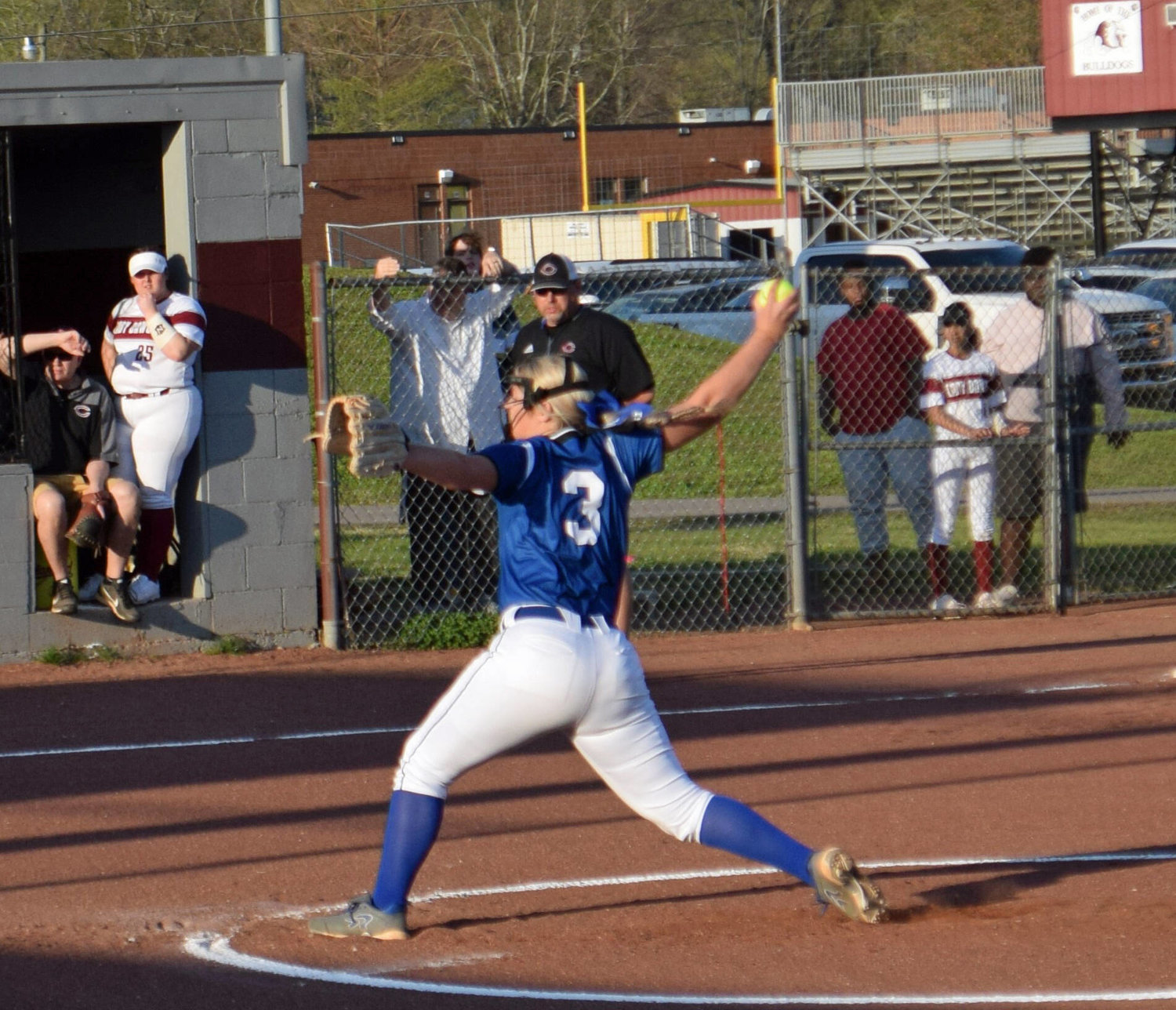 Marshall County pitcher Taylor Pickle (3) picked up the win in the circle for the Tigerettes Monday night at Cornersville.
Tribune photos by Dennis Holley 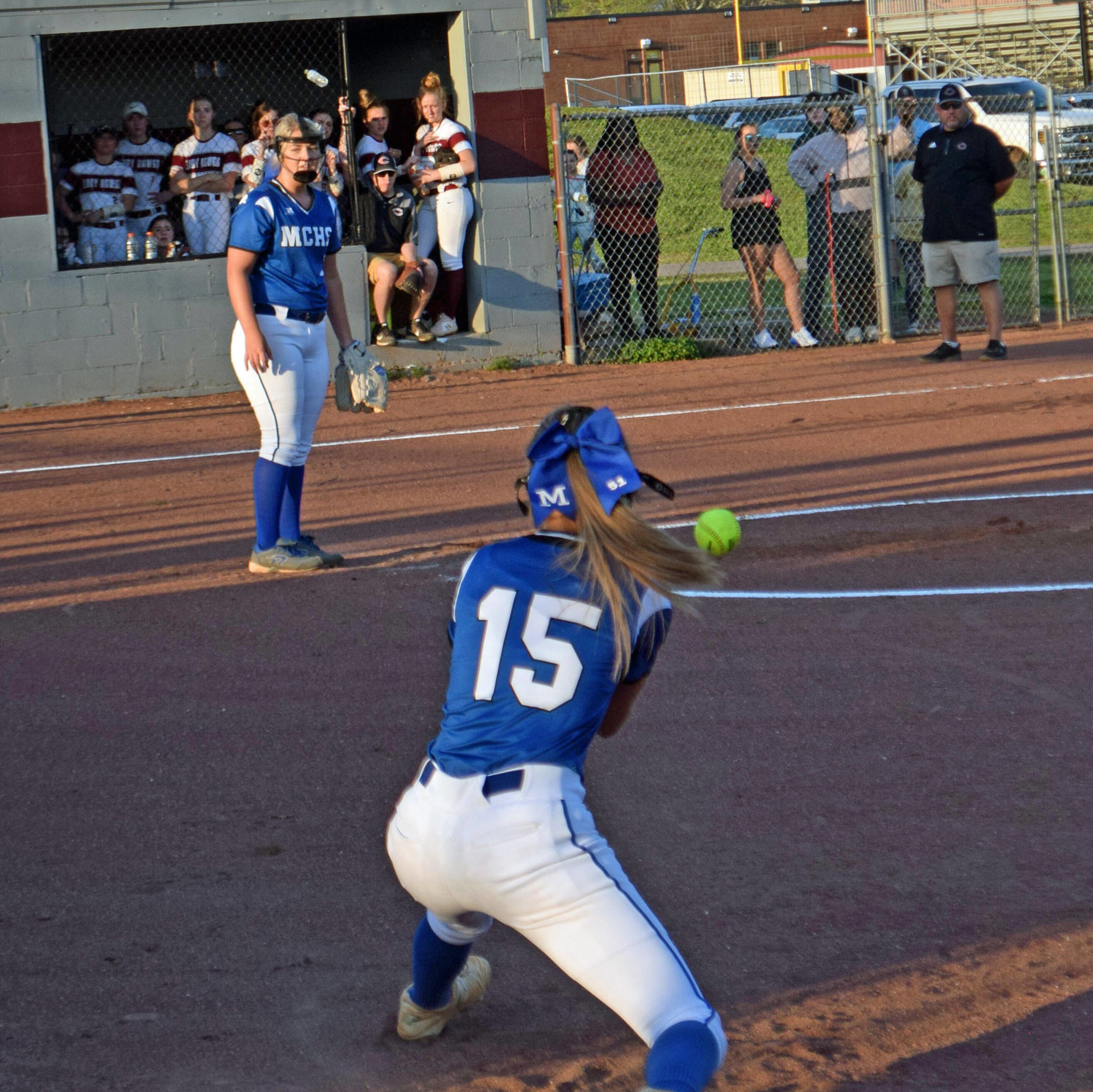 MCHS first baseman Abby McGehee (15) makes the stretch for an out versus the Lady Bulldogs. 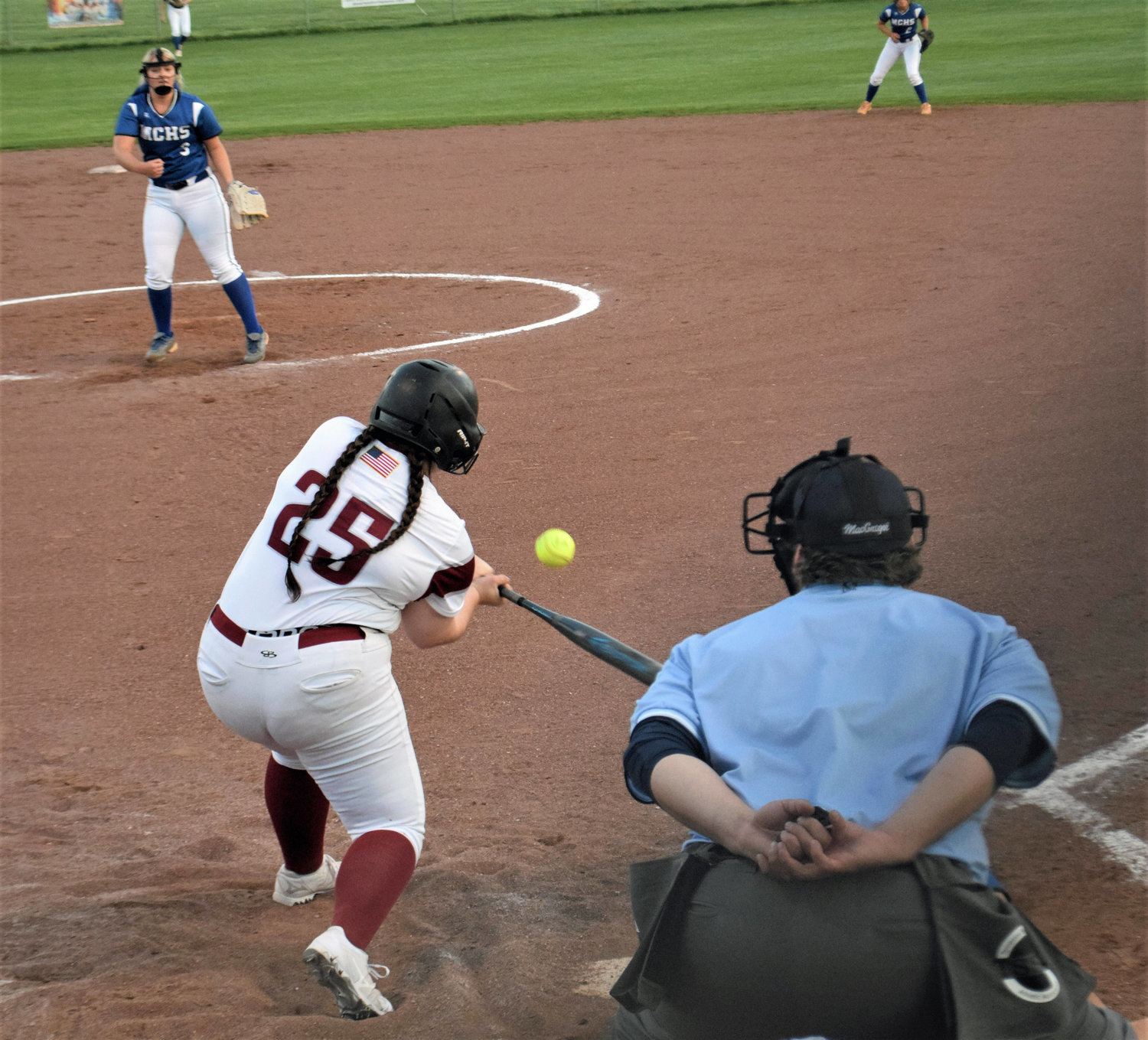 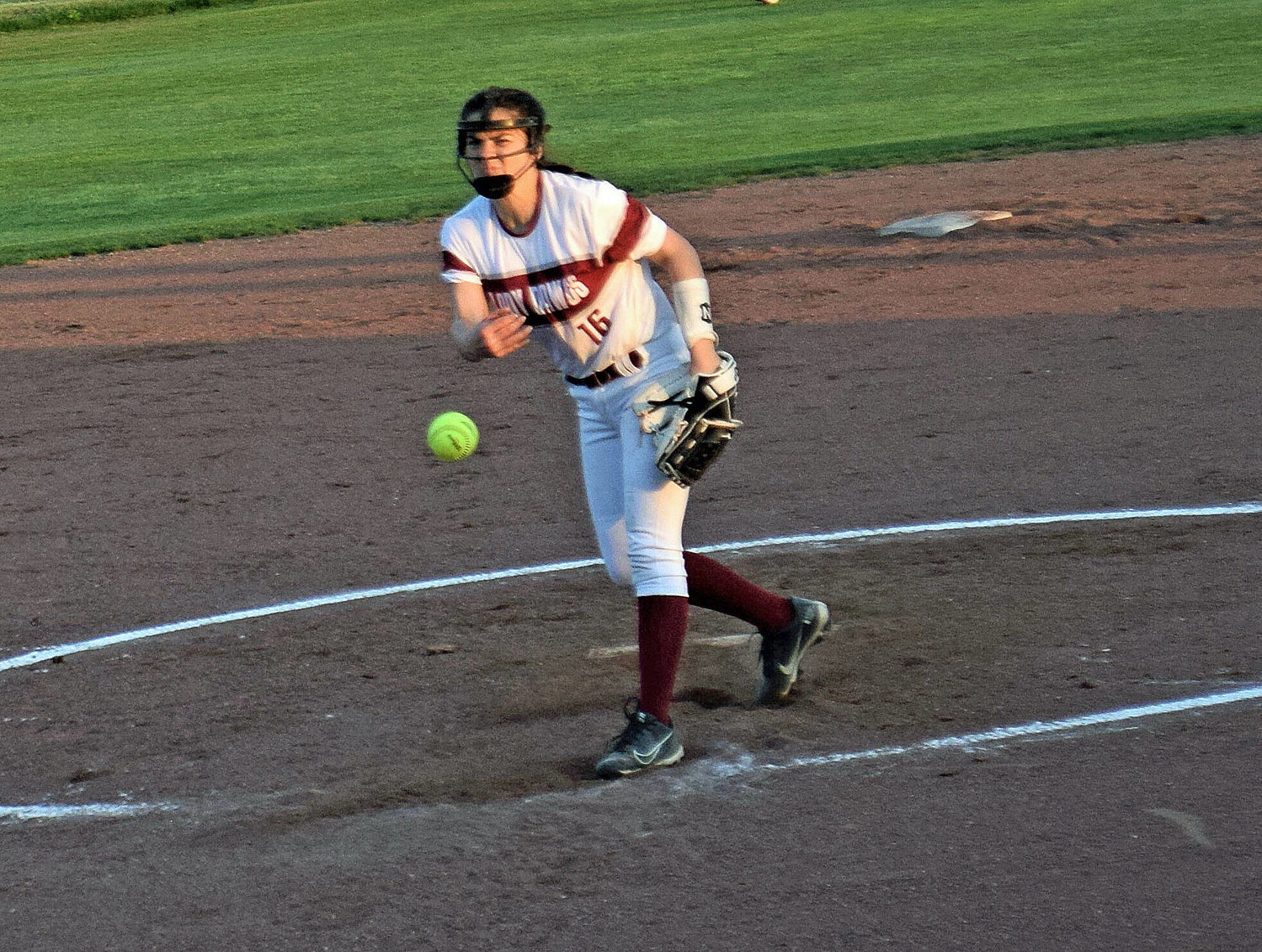 Cornersville’s Carmen Ward (16) delivers a pitch to the plate. 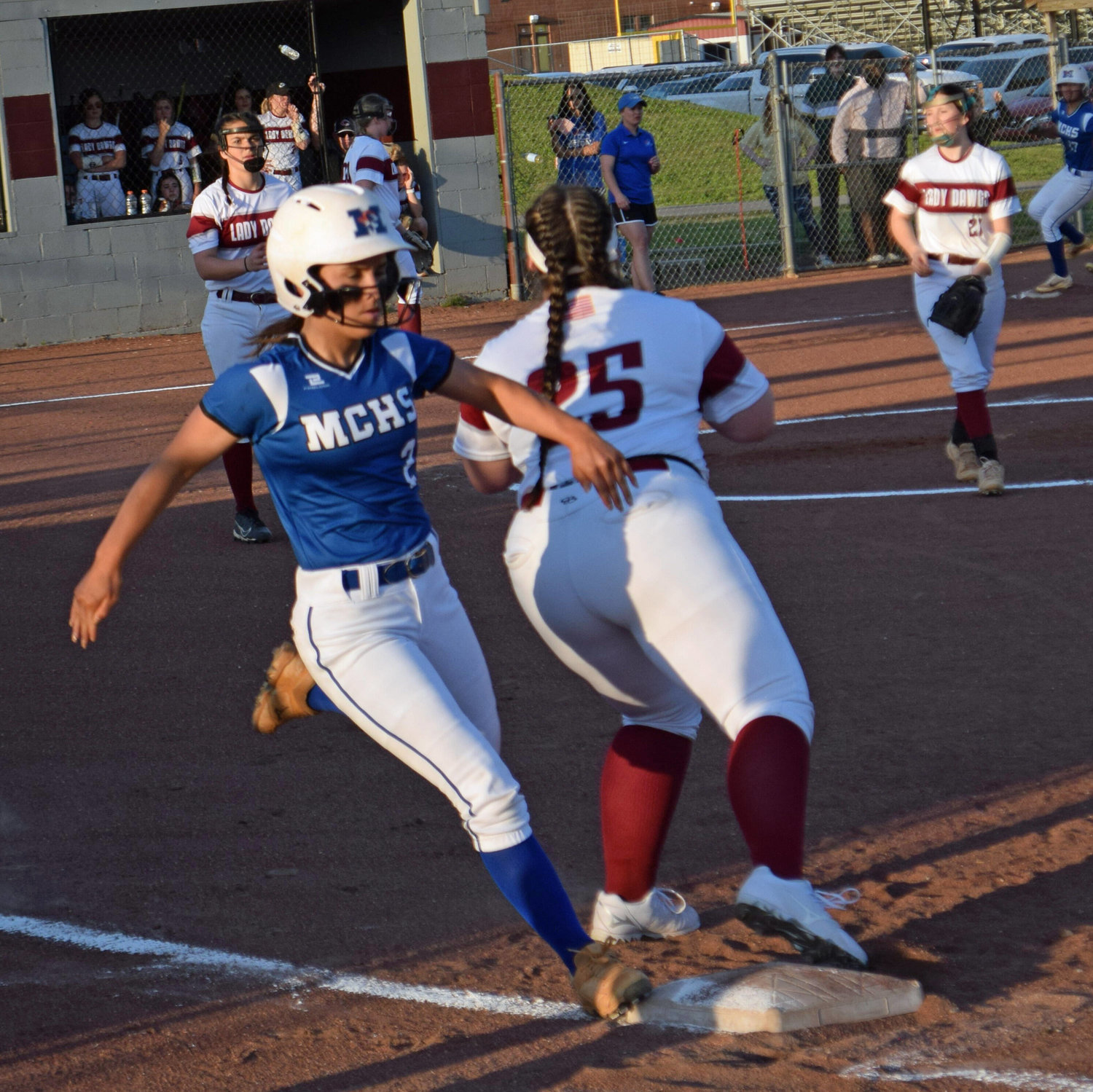 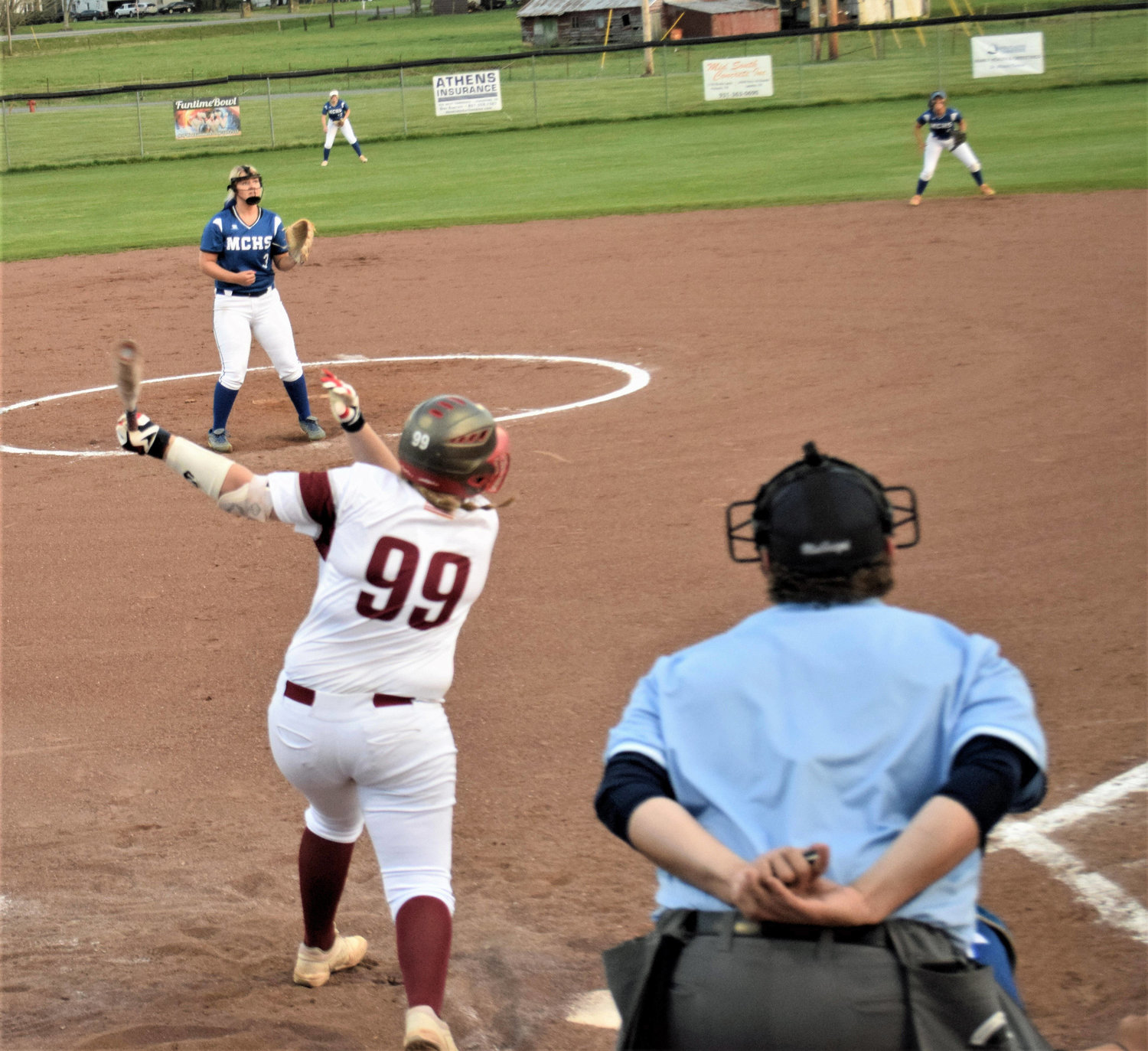 A beautiful spring day turned in to a pleasant Monday evening for an intra-county rivalry to be played out on Cornersville High School’s softball field as the Marshall County Tigerettes, fresh off a trip to Gulf Shores, Alabama for the Gulf Shores Classic III Softball Tournament, rolled in to take on the Lady Bulldogs.

The Tigerettes, who had beaten the Lady Dawgs 11-8 on March 22, completed the season series sweep with an 8-5 victory.

The pitching of Taylor Pickle and long-ball hitting of Ellie Luce and Jahna Meadows carried the Tigerettes to the win.

“We faced some really good pitching down in Gulf Shores and I think that prepared us for the game tonight,” MCHS coach Baylee Taylor said. “We’ve got district games and Columbia coming in on Friday.’

“If we can keep hitting the ball, I feel we will be alright.”

Cornersville could only manage two hits off a dominant Taylor Pickle in the circle for MCHS.

The Tigerettes started things off in good fashion in the top of the first inning when Demiyah Blackman led off with a base on balls.

With one out, Ellie Luce got aboard on a Bulldog error with Blackman taking third base.

Kaniyah Taylor then smashed a ground ball that eluded the Lady Bulldogs’ defense and both Blackman and Luce raced home to put the Tigerettes on top 2-0.

Lady Bulldog pitcher Carmen Ward settled down to get a fielder’s choice and a fly ball to center to end the inning.

In the bottom of the first inning, Jayli Childress reached on an error, but was stranded as the Lady Bulldogs could not bring her around.

The top of the second saw the Tigerettes add another run as Jahna Meadows led off with a walk and with Olivia Wooten pinch running, Tatum Garrett singled Wooten home to push the MCHS lead to 3-0.

The Lady Dawgs could not solve Taylor in the bottom of the second inning and in the top of the third, the Tigerettes struck again.

With one out Pickle singled, Jessa Lancaster was hit by a pitch, and Meadows loaded the bases with a single to center.

Garrett plated Pickle and Lancaster with a single to push the MCHS lead to 5-0.

The Tigerettes loaded the bases, but a grounder to Ward resulted in a force out at home plate to retire MCHS.

The Lady Bulldogs got on the board in the bottom of the third inning as Woodard drove a line drive over the left/center field fence to put Cornersville on the board at 5-1.

“It was an outside pitch,” Woodard said.

Alicia Polk got on via a base on balls, but was stranded as Pickle baffled the Cornersville hitters.

Luce led off the top of the fourth inning with a home run over the center field fence to up the MCHS lead to 6-1.

“It was inside at the belt, a perfect pitch to hit out,” Luce said. “We have been doing well this year and I am excited about the upcoming district games.”

The bottom of the fifth inning saw the Lady Bulldogs claw their way back into the game.

Back-to-back errors by the Tigerettes put Anna Woods and Woodard on base and Polk drew another walk before Jayli Childress tripled to right center field to clear the bases as Cornersville closed the gap to 6-4.

“It was low and outside, but I was hoping it would go out,” Childress said. “I really needed it (the triple).”

Childress came home on an error to make the score 6-5.

Pickle got a pop-up to third to escape further damage to end the fifth inning.

As with good teams that have their opponent rally to close the scoring gap, the Tigerettes struck back as Pickle doubled to left/center field in the top of the sixth inning.

After an out, Meadows pounded the ball over the center field fence to pad the MCHS lead to 8-5.

“It was an outside pitch which I can handle,” Meadows said. “We were able to keep things going even though we messed up in the bottom of the fifth inning.”

“It wasn’t our best game, they hit up and down their line up,” Cornersville coach Nathan Polk said. “We have three district games and a doubleheader with Loretto to play this week.”

“We are battling youth, but I feel we are gaining ground.”