Paige Styles has played soccer for the majority of her life. From the early age of five years old to her time in high school, she’s built a dream of wanting to play soccer at the collegiate … 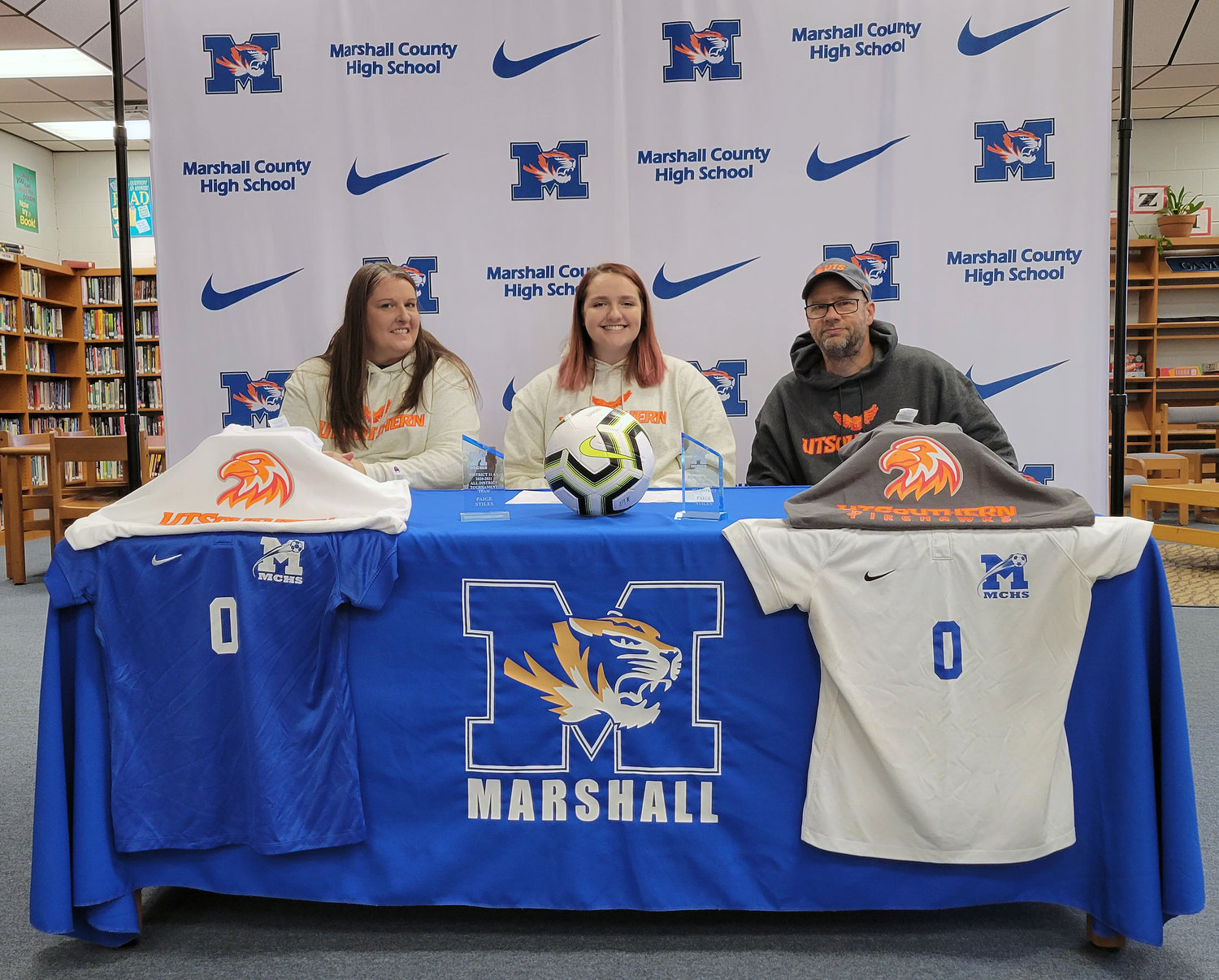 Paige Styles has played soccer for the majority of her life.
From the early age of five years old to her time in high school, she’s built a dream of wanting to play soccer at the collegiate level.
The Marshall County Tigerette senior recently signed her letter of intent to continue her soccer career at the college level at UT-Southern.
“I’m a little overwhelmed because I’ve been looking forward to it. I had been looking at playing soccer in college since my freshman year in high school up in Ohio,” she said.
After her freshman season playing in Ohio, Styles transferred to Marshall County as a sophomore and made an immediate impact on the team through both her play on the field and her leadership ability.
“During her time here, she’s been an extremely hard worker. She earned a starting position almost immediately. She has great leadership ability and was one of our captains this year,” Tigerette coach Mike Livingston said.
In addition to being one of the standout players for Marshall County, Styles participated in several exposure camps designed to showcase athletes to various college coaches to facilitate the recruiting process.
While she initially had considered out-of-state schools, Styles eventually felt the pull back to Southern Middle Tennessee and wanted to stay close to home.
“I was on NCSA, which is a student-athlete app. I had been looking at a school in Pennsylvania and I had talked to their coach. But then I realized I wanted to stay kind of close to home. I went to Belhaven and did an ID camp there and I did an ID camp in Jacksonville, Florida. But this has always been kind of a No. 1 for me because I get to play soccer and it’s close to home,” she said.
Styles willingness to put in the work on the field came in handy during her senior season as an injury in goal forced Livingston to turn to the UT-Southern signee to fill in at a new position.
“Things that really make her different than some players I’ve coached is she’s willing to go play different positions. I put her in at goal, which is not her natural position, and she worked really hard there,” Livingston said.
Her impact in goal caught the notice of the other district coaches and for her efforts, Styles was named to the all-district team.
“She was also able to get really focused when we got to the tournament. While we didn’t win, she caught the notice of the other coaches and they nominated and put her on the all-district team. What I liked about that is I had no say in it. That came from my peer coaches in the district,” Livingston added.
Her willingness to put in the work and fill in to help the team wherever needed, Livingston said, is one of the key attributes that will help Styles fit in at the next level.
“They (players) have to really understand their role that everyone at the next level is going to be just as good as them. I think with her hard work and personality, she rolls constructive criticism off her back and takes it to heart, I think that will be a good fit for where she’s going.
From her earliest days of playing soccer with her brother while her dad coached the team, to a summer playing in a developmental league before high school, Styles has built quite the collection of memories playing.
“My favorite memory was when I played in a developmental club before high school. It was that summer. It had been raining for two days straight and I’m in Ohio at this point and we play in any weather. There’s a picture of me after the game with mud all over me. I had gotten the name “Slip-n-Slide” because I slid on the ground,” she said.
Styles plans to pursue a degree in psychology or special education.