The Forrest Rockets travelled to Waverly Friday night for a Class 2A second round playoff game, looking for redemption from back-to-back postseason losses to the Tigers in 2017 and 2018.

Forrest fell behind early at the Ray Hampton Stadium in Humphreys County before tying the game at 14-14 right before the half, but a 23-point third quarter by the Tigers put the Rockets in a hole they could not dig out of in a 37-14 season ending loss. 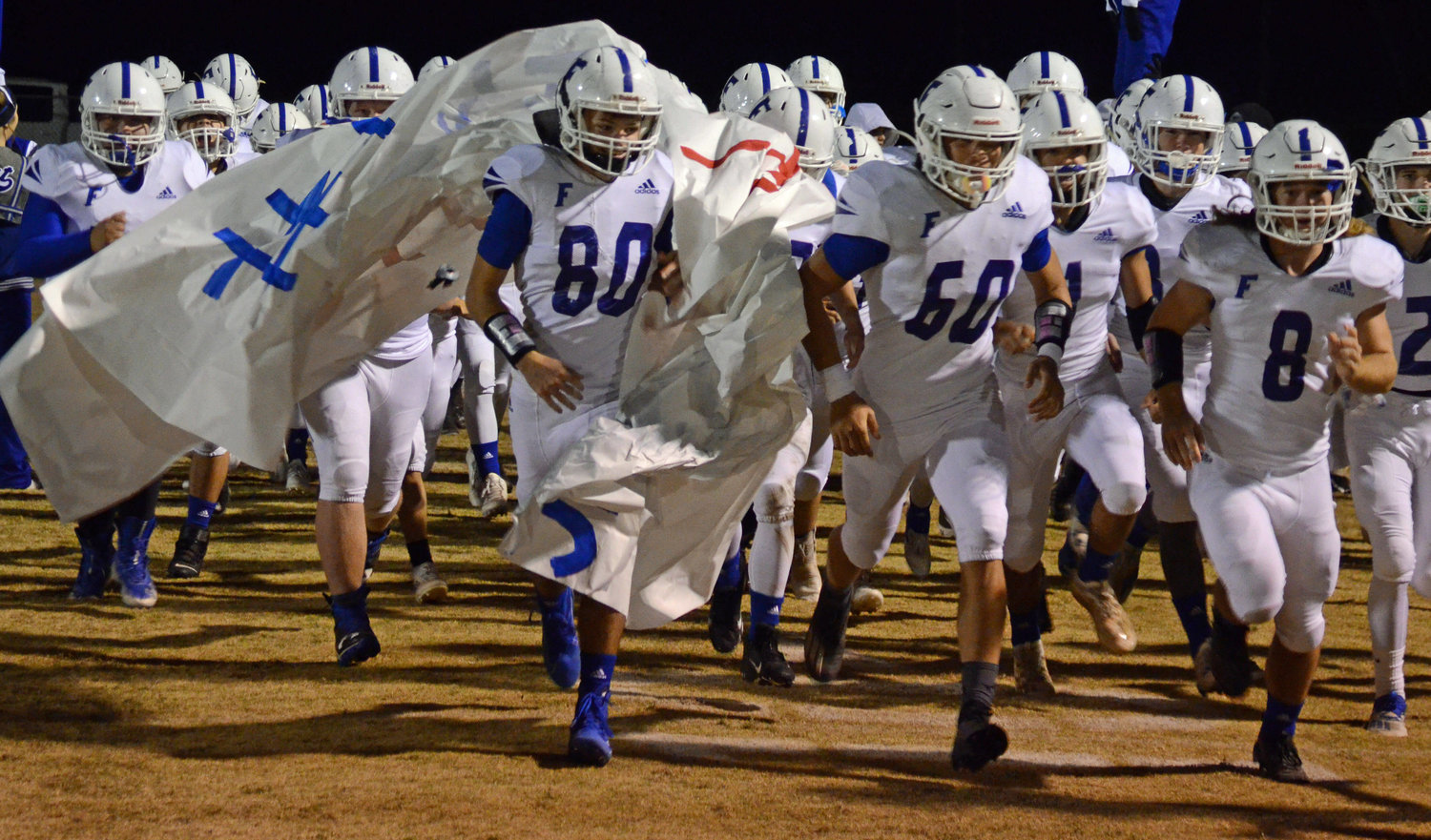 The Rockets run out before their Class 2A second round playoff game at Waverly Friday night.
Tribune photos by Anthony S. Puca 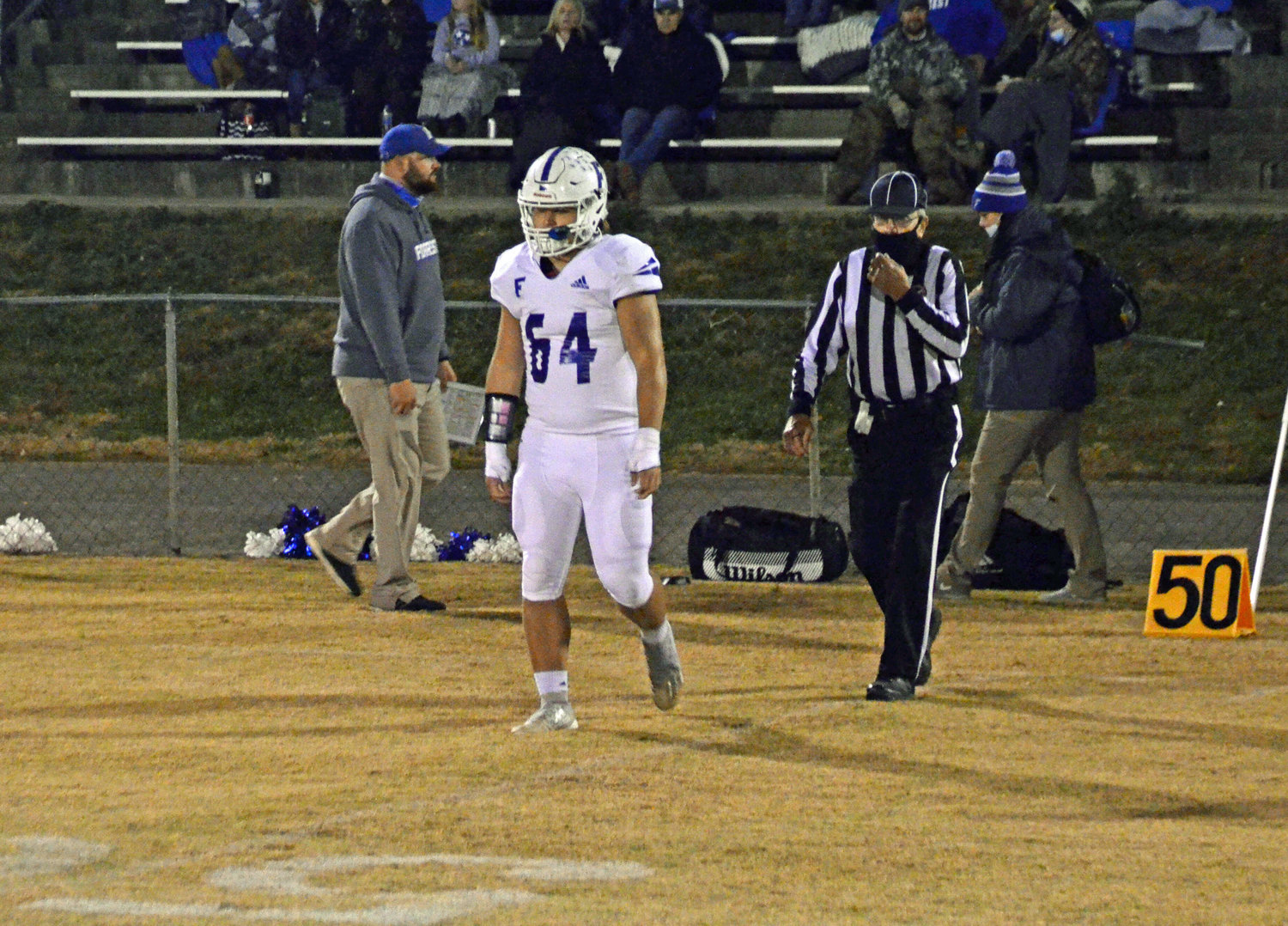 Forrest senior Noah Hill walks to the midfield for the opening coin toss for the last time as a Rocket captain. 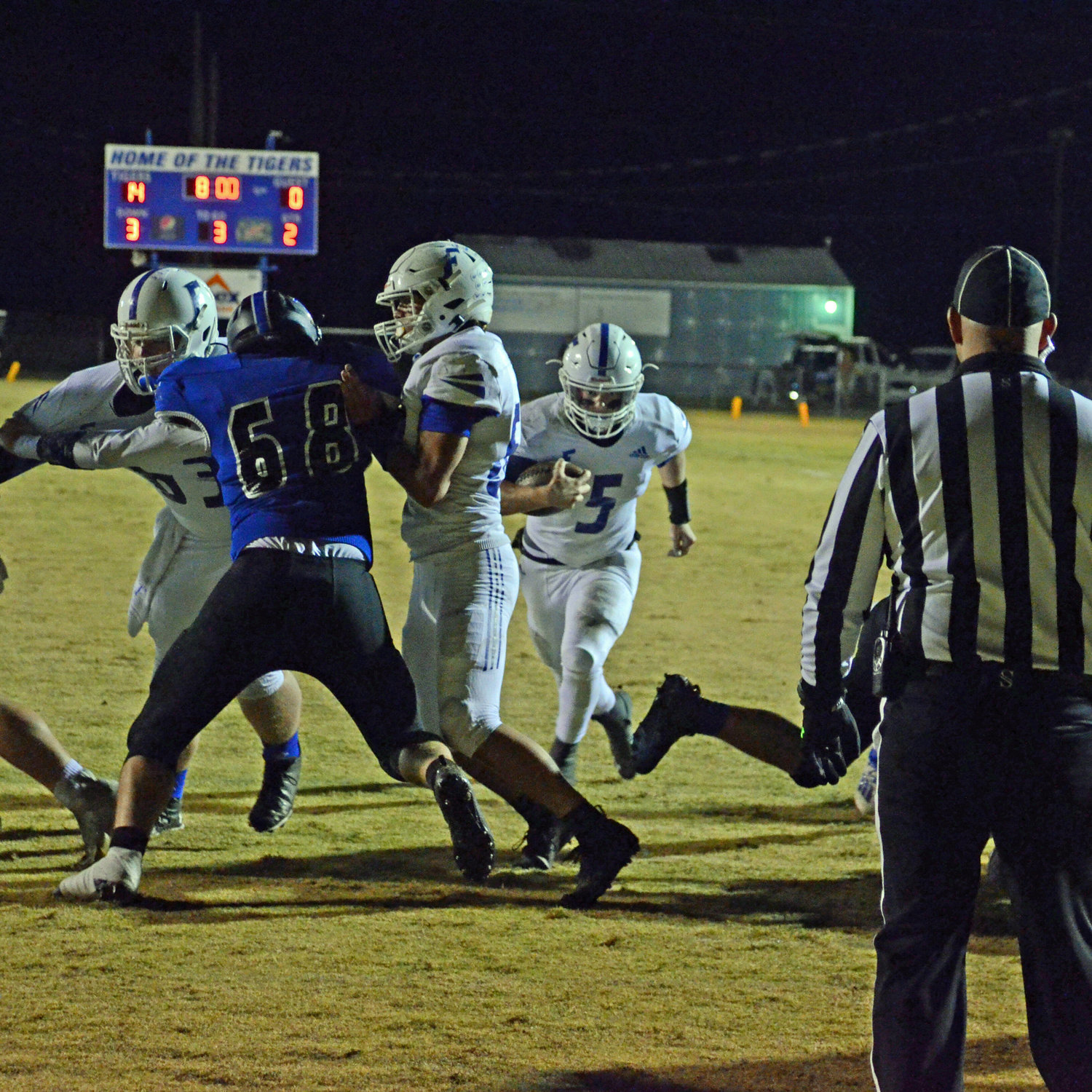 Forrest quarterback Max Kirby (5) gets the Rockets on the board with a 1-yard second quarter touchdown. 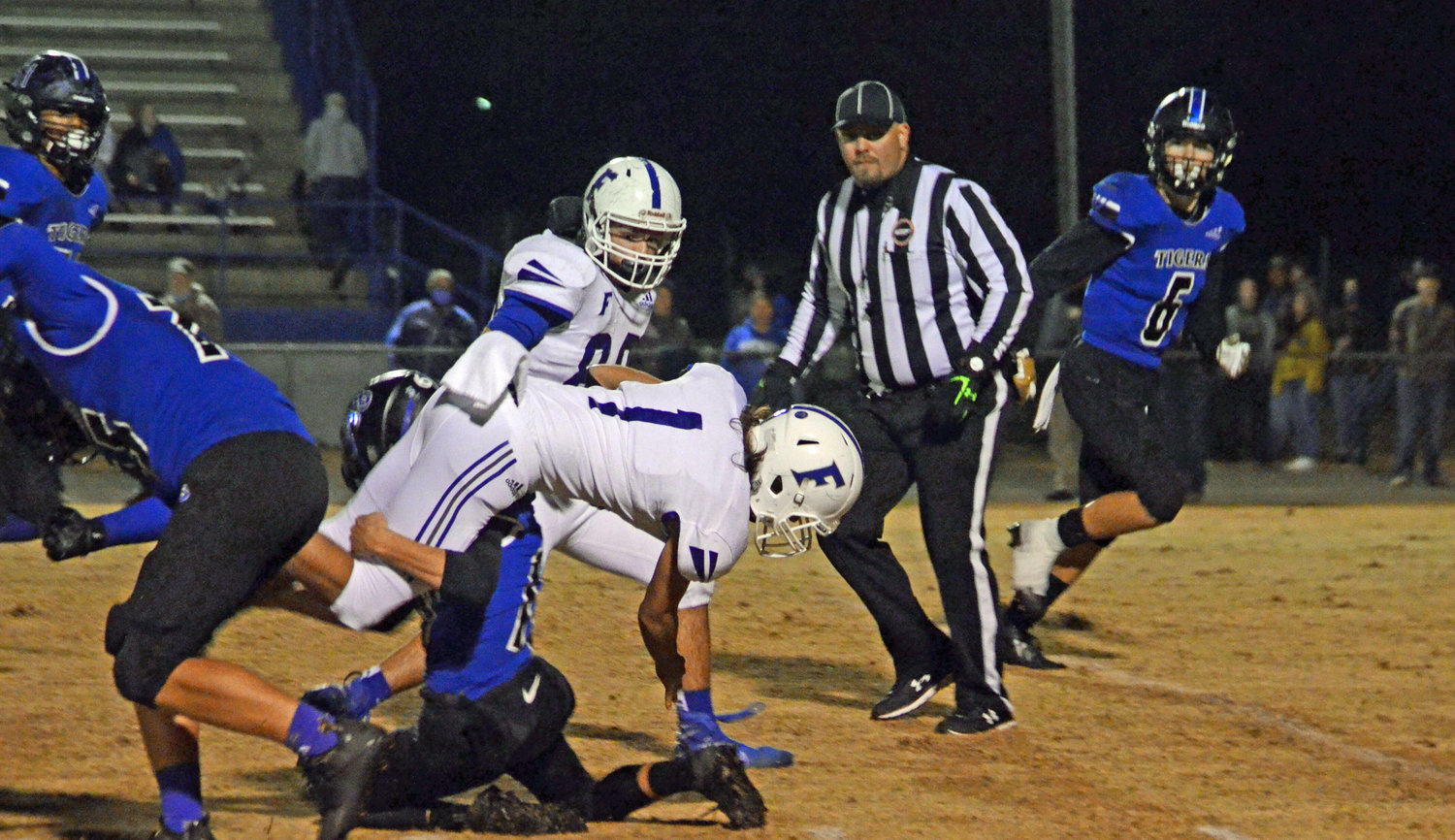 Forrest running back Chris Davis (1) comes up with an 8-yard run in the second quarter versus the Tigers. 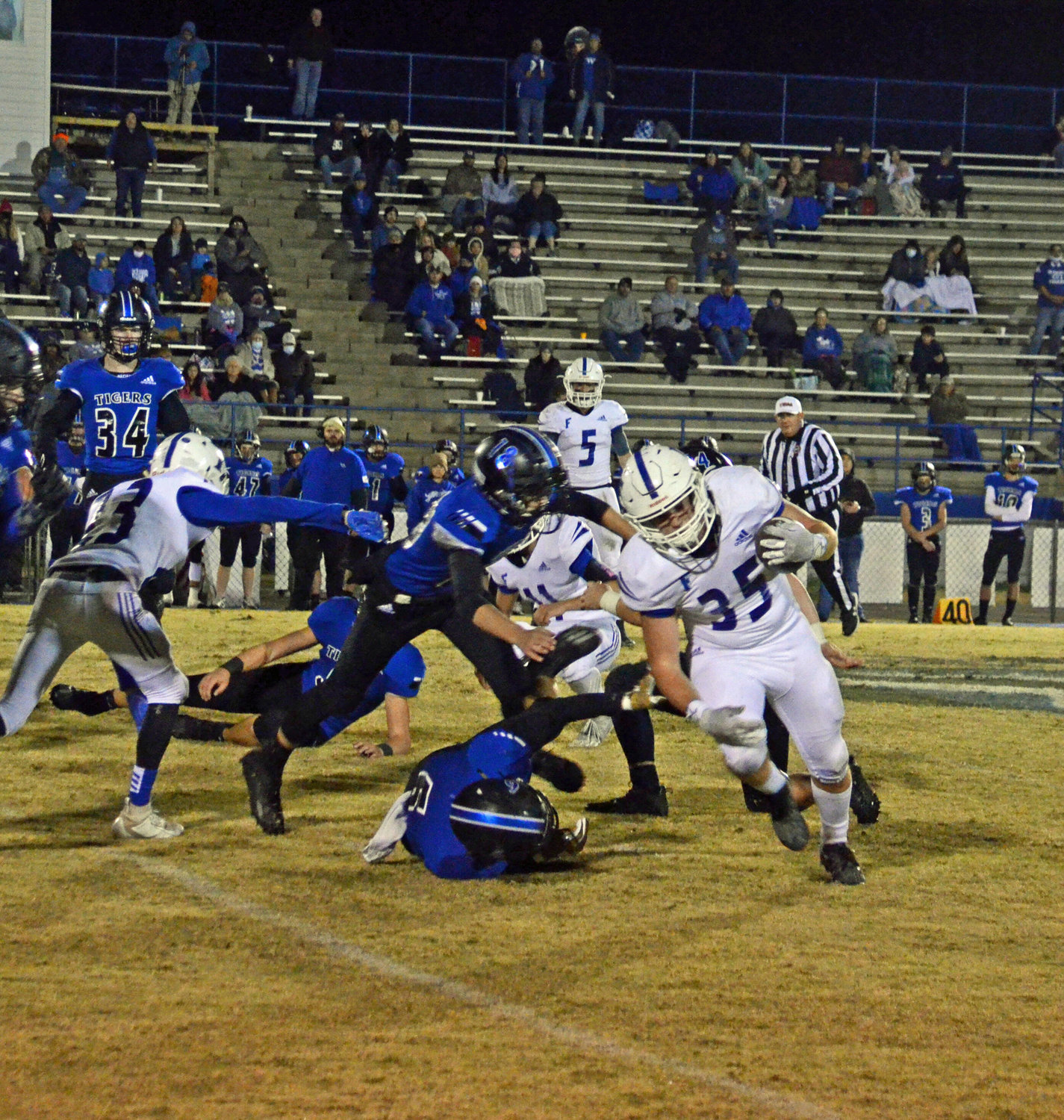 The Forrest Rockets travelled to Waverly Friday night for a Class 2A second round playoff game, looking for redemption from back-to-back postseason losses to the Tigers in 2017 and 2018.

Forrest fell behind early at the Ray Hampton Stadium in Humphreys County before tying the game at 14-14 right before the half, but a 23-point third quarter by the Tigers put the Rockets in a hole they could not dig out of in a 37-14 season ending loss.

“The second half got us,” Forrest coach Eli Stephenson said. “Our kids are going to play hard, it don’t matter what the score is they are coming out and playing.”

“Hats off to Waverly, they got us tonight, but our kids came to compete, the second half didn’t go our way when we shot ourselves in the foot and we couldn’t get away from it.”

The Rockets finished the strange and emotional 2020 season with a 7-5 record while Waverly (9-4) secured a quarterfinal home matchup versus Decatur County Riverside, who shutout the unbeaten and third-ranked Region 5-AA champion Lewis County Panthers 12-0 at Hohenwald.

Waverly beat the Riverside Panthers 21-0 on October 30 in a Region 6-AA regular season game and the two teams have a long history of battles with Waverly winning 34-7 in a 2019 quarterfinal game and the Panthers eliminating the Tigers via a 34-0 second round win in 2018.

Waverly shut down the Forrest running game on Friday night, holding the Rockets to a measly 39 yards on 29 carries while piling up 253 yards on 44 carries with just three Tigers handling the rock.

Running backs Emrick Houston (95 yards) and Easton Elliott (90 yards) combined for a 185 yards on the ground and had one touchdown run apiece while quarterback Jacob Dooley ran for 68 yards and had touchdown runs of 16 and 14 yards in the third quarter.

The majority of the Forrest offense came off the arm of senior quarterback Max Kirby, who went 11-for-21 for 145 yards with one touchdown pass to Brenton Burchell and Kirby had the lone rushing touchdown in his final game as a Rocket.

Waverly won the opening coin toss, but deferred and the Rockets put together a nice offensive series that went all the way to the Tigers’ 31-yard line where the drive stalled out and the home team took over on downs.

On their first offensive snap, Dooley found Brady Stansfield for a 61-yard catch to the Forrest 6-yard line and two plays later, Elliot scored from one yard out.

Ian Holland booted the first of his five successful point after touchdown kicks and the Tigers led 7-0.

The Rockets went three-and-out on their second touch and the Tigers put together a 10-play drive that was capped off by a Houston 2-yard touchdown run that made it a 14-0 contest with 50 seconds remaining in the first quarter.

The Rockets started at their own 42-yard line after the ensuing kickoff and got things going again on offense as they marched all the way down the field and cut the lead in half with 7:57 remaining in the second quarter on Kirby’s one-yard TD plunge and a Carson Baker extra point boot.

Forrest got the first turnover of the game when Tayton Swift came up with an interception on a deflected pass and the Rockets needed just one play to tie the game when Kirby found Brenton Burchell behind the Waverly defense for a 76-yard touchdown.

The Tigers tried to bounce back, driving all the way to the Forrest 35-yard line where a fourth down run was stuffed by the Rockets’ defense with 3:09 remaining in the first half.

The Rockets were fired up after the defensive stop and drove to the Waverly 32-yard line where Kirby found Wilson McCalister on a pass inside the Tigers’ 5-yard line, but the play was called back on a holding penalty on Forrest.

Forrest rebounded and faced a third-and-11 back at the 32-yard line when Kirby launched another pass to McCalister for an apparent go-ahead touchdown, but once again the yellow hanky flew on another holding call and on the next play Kirby was intercepted by Ayden Brooks and the first half ended deadlocked at 14.

Waverly took advantage of their fortunate breaks at the end of the first half and took the second half kickoff at their own 25-yard line and marched to the Forrest 17-yard line on eight plays where Dooley tossed a touchdown pass to Bryce Stansfield.

The Rockets began to self-destruct moments later when a fumbled snap put them in a deep hole at their own 5-yard line and they were forced to punt.

The snap on the punt hit the ground and Christian Hammond kicked it out of the end zone for a safety, making it 23-14 with 6:11 remaining in the third quarter.

“Going in to the locker room I thought we had the momentum, our kids made some big plays in the first half and we had them tied at 14-14, but the second half just didn’t go our way,” Stephenson said. “After that three-and-out things just snowballed on us and we were never able to recover after that.”

The Tigers took over at the Forrest 40-yard after the kick on the safety and three plays later Dooley was in the end zone for a touchdown and a 16-point Waverly lead at 30-14.

All the momentum was on Waverly’s side as the Rockets went three-and-out before the Tigers put the game away with 1:23 remaining in the third quarter when Dooley ran in the backbreaker from 14 yards out to make it 37-14.

Forrest’s three fourth quarter drives ended with an interception, a fourth down incompletion, and the season ending series that saw the final whistle.

“This is a great senior class with great leadership and I am going to miss them,” Stephenson said. “We never knew if we were even going to play this year and the kids knew in the back of their minds that a game might be cancelled, but they came to work every day. We have a bunch of blue collar kids and they showed up every day to work and they gave it all they had.”