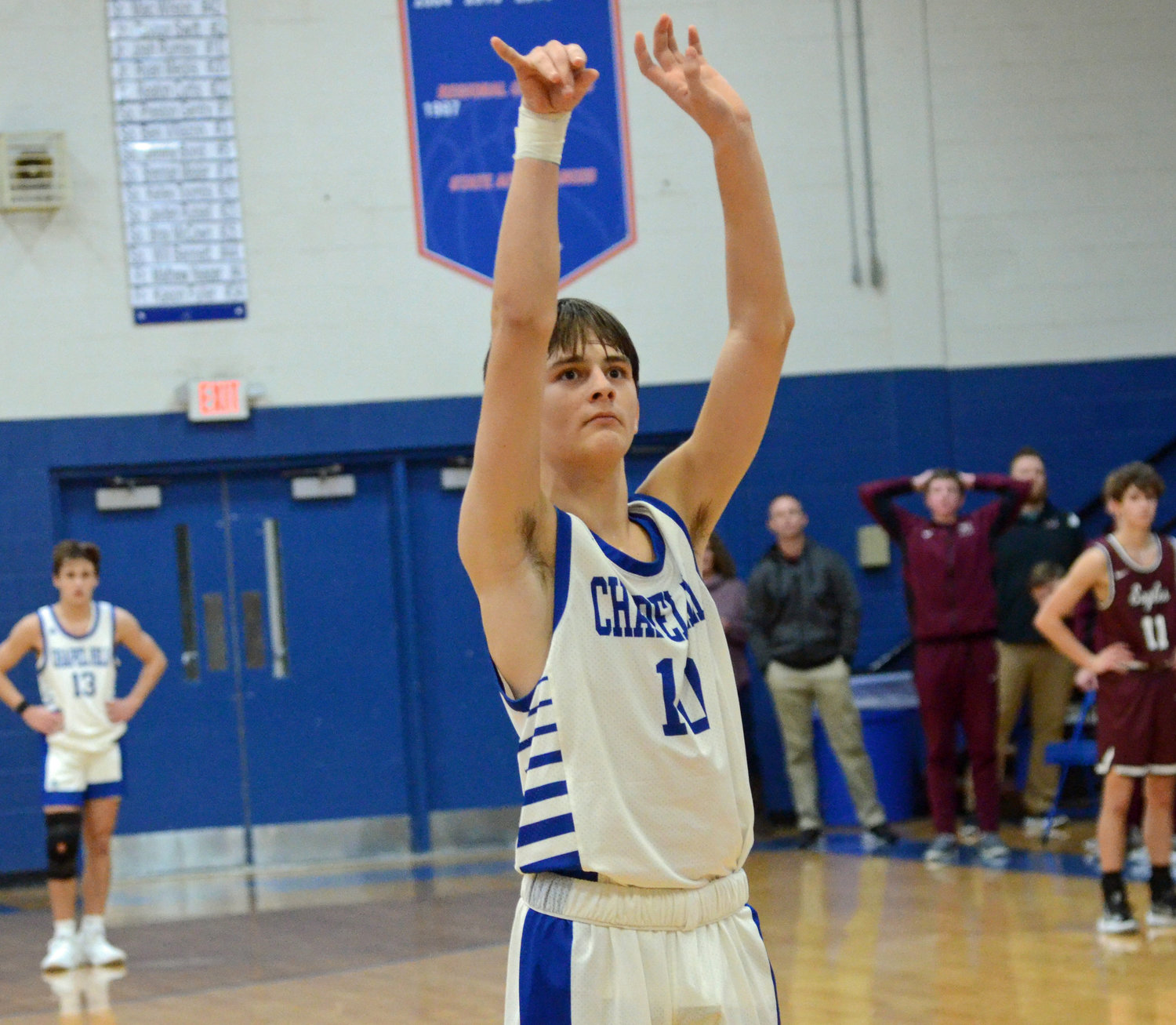 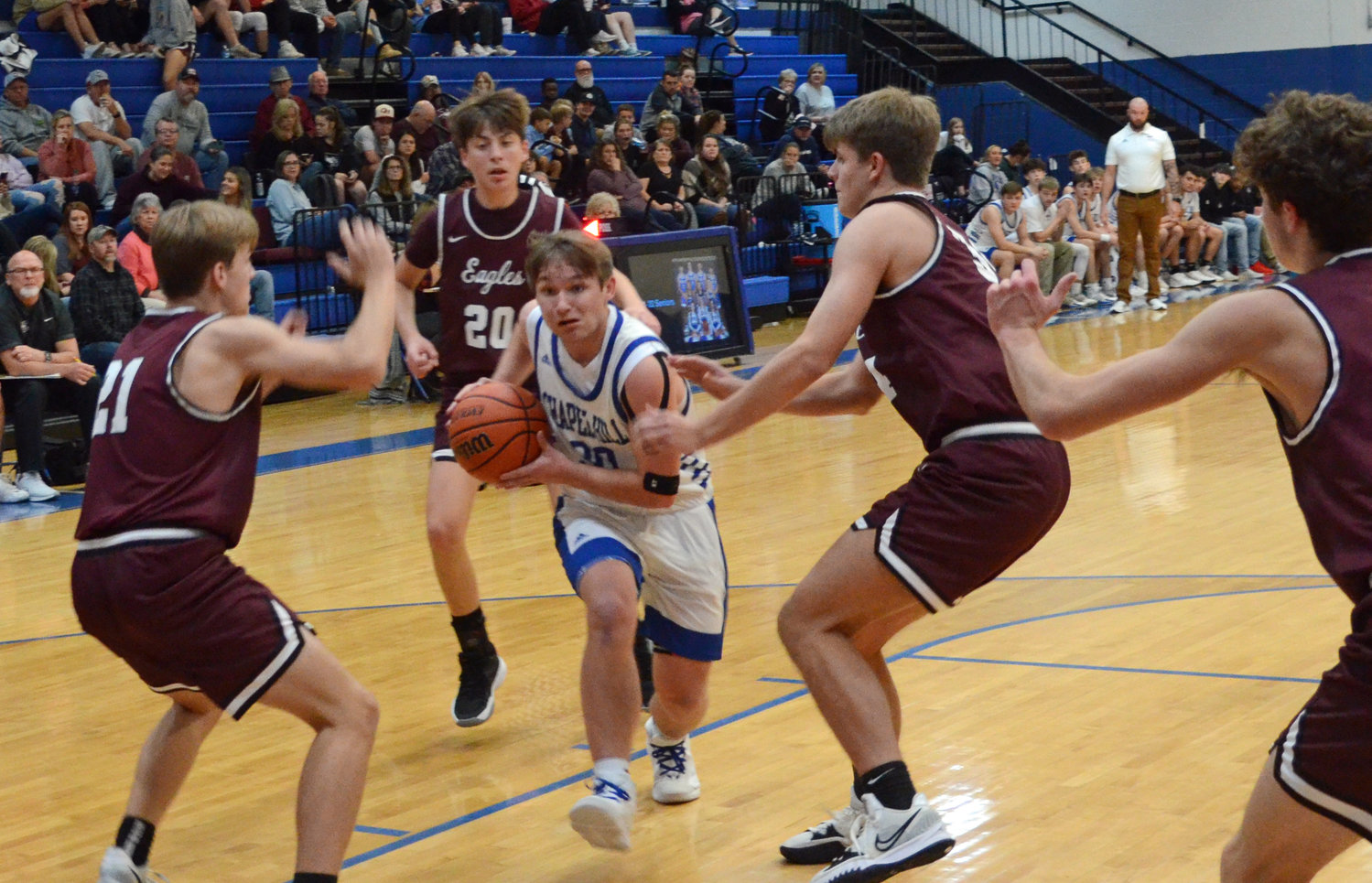 Andrew Timmons (30) drives through the entire Eagleville defense on his way to a layup and two of his team-high 13 points in the contest. 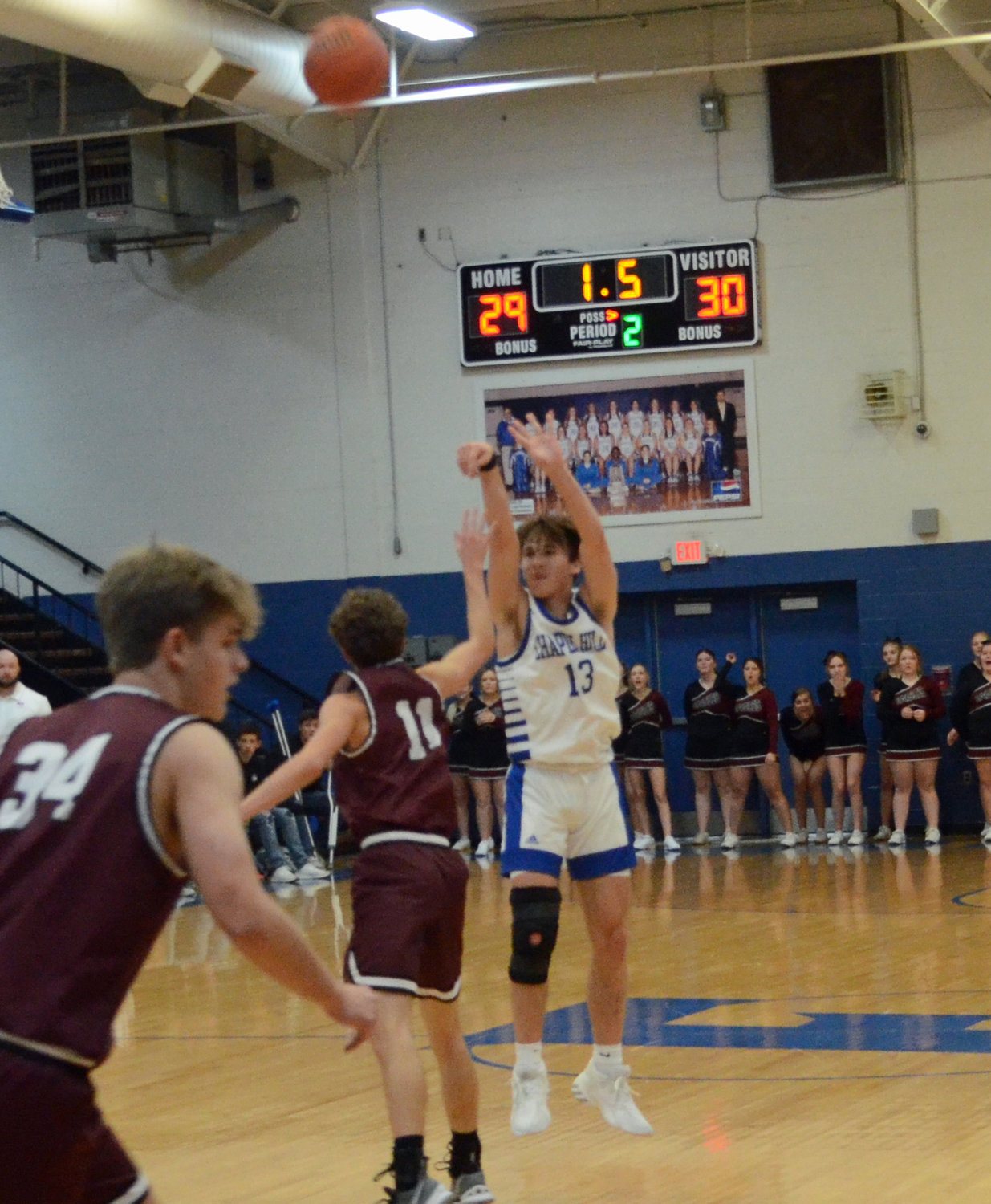 Deason Jones drains a buzzer-beating 3-pointer at the end of the first half. 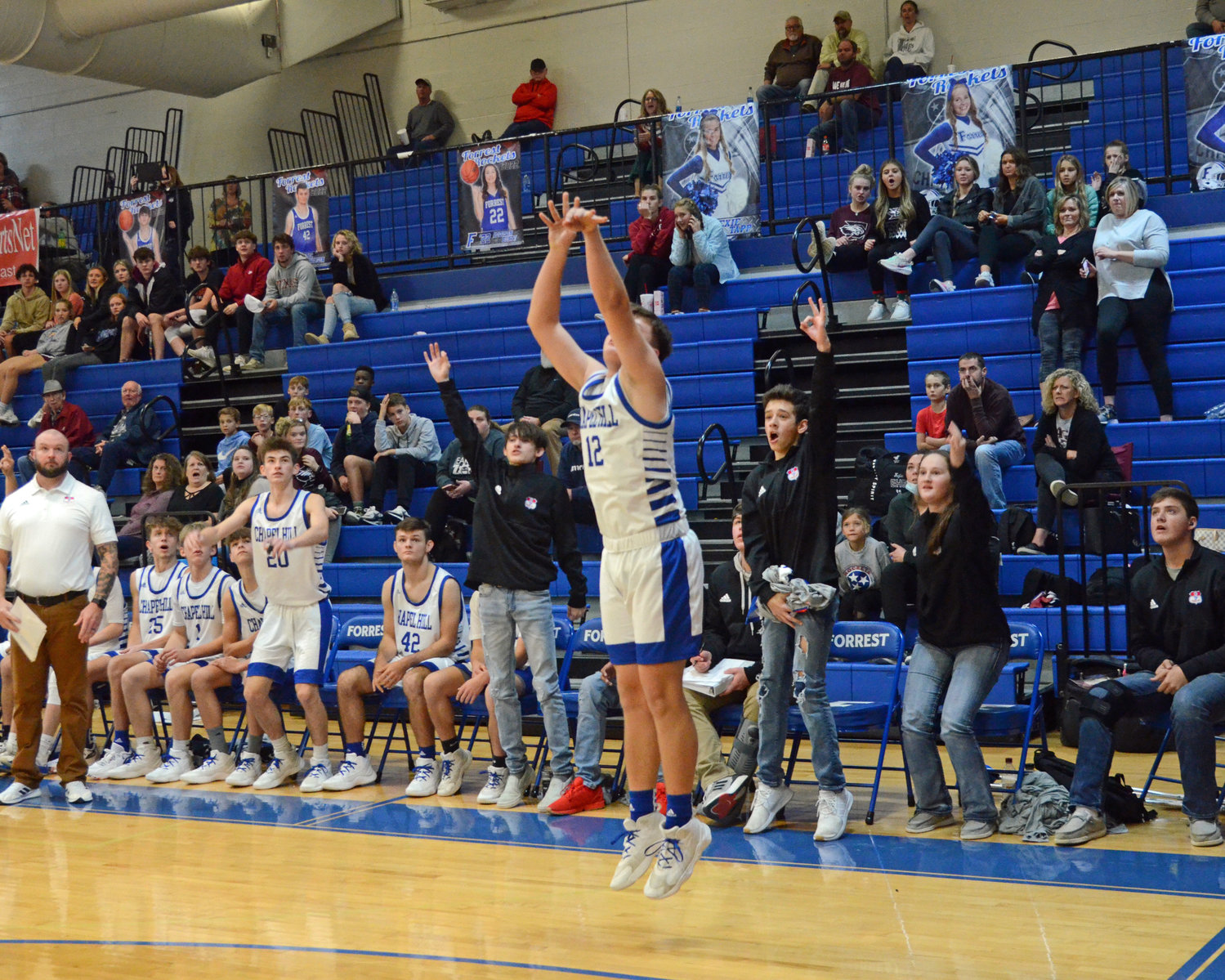 Brennan Mealer nails a 3-pointer at the beginning of the fourth quarter.
Previous Next
Posted Wednesday, December 1, 2021 8:15 pm

“It was just a free throw,” a smiling Rumley said after the game. “It was like every day at practice.””
Josh Rumley
By Anthony S. Puca Sports Writer

When Forrest plays nearby Eagleville in a rivalry that goes back many decades, crazy stuff always seems to happen and that was the case Tuesday night at Chapel Hill with the Rockets coming away with a gut-wrenching 49-48 win.

“We are hungry and we are not done,” First-year Forrest coach Shane Chapman said. “Eagleville is a good ballclub, this game is extra special, one you circle on your calendar because of all the good memories and all the good people from over there where I come from, but we are hoping to turn things around here and need all the help and support we can get.”

Josh Rumley was the Rockets’ hero as the junior came up with a huge offensive rebound with just seconds to go in the game and on an unsuccessful put-back attempt, Rumley was fouled.

With the fans loudly cheering on both sides of the gym, Rumley stepped up to the charity stripe and spun out his first free throw attempt before draining the game-winner with 0.3 seconds left in the game.

It was a back-and-forth contest the entire game with the Eagles leading at the end of the first and third quarters while the Rockets held a two-point lead at the half.

Eagleville’s Isaac Gazaway, who led all scorers in the game with 17 points, scored nine of his team’s 11 points in the first quarter.

The Eagles still led by two points midway through the second quarter at 21-19 after a Keydon Bassham 3-pointer before the Rockets began to surge.

Bray McCown came up with a three-point play the old-fashioned way to put Forrest in front by one point and Ben Villazon scored on back-to-back possessions to make it a 27-21 contest.

The Eagles came back with a 9-2 run to retake the lead at 30-29 before Forrest senior Deason Jones buried a buzzer-beating 3-pointer to put the Rockets up by two points at the half.

It was a low scoring third period as the Eagles scored nine points and the held the Rockets to six points to take a one-point, 39-38 lead to the fourth quarter.

Forrest senior Andrew Timmons, who led the Rockets in the scoring column with 13 points hit one free throw to start the final period, tying the game at 39 and after an Eagleville turnover, Brennan Mealer drained a long bomb from the corner.

Timmons drove through the Eagleville defense again and made another free throw before the Eagles missed the front end of a one-and-one opportunity from the free throw.

Chapman called timeout and after the stoppage, Hunter Bennett came up with a nice assist to Rumley for a 45-39 Forrest lead with five minutes to go in the contest.

The Eagles dug in again, going on 6-0 run, tying the game at 49 on two CJ Goers free throws with 2:29 remaining in the contest.

Jones answered in a big way, throwing down a rainbow 3-pointer to make it 48-45.

The Rockets had two opportunities to put the game away but let the Eagles hang around and it cost them when Jordan Reed knocked down a game-tying 3-pointer from Highway 99 with 20.8 seconds to go.

After a Forrest timeout, the Rockets held the ball until a last second shot bounced off the rim and Rumley was there for the rebound.

It was make or go to overtime as Rumley stepped up with the pressure cooker turned up on extra high after the first charity shot spun out, but it was win time for Chapel Hill as Rumley hit nothing but net on the second shot.

“It was just a free throw,” a smiling Rumley said after the game. “It was like every day at practice.”

The only way to score with 0.3 seconds left is a tip at the rim and the Eagles could not get a shot off as the game ended with Forrest securing the win.

“We came back from break and we were focused,” Timmons said. “We were ready to play tonight, we wanted to get in the win column, so we just have to stay focused and play like we did today and not slow down.”

The Rockets travel to Moore County (1-5) on Friday and host Sycamore (0-3) on Saturday.