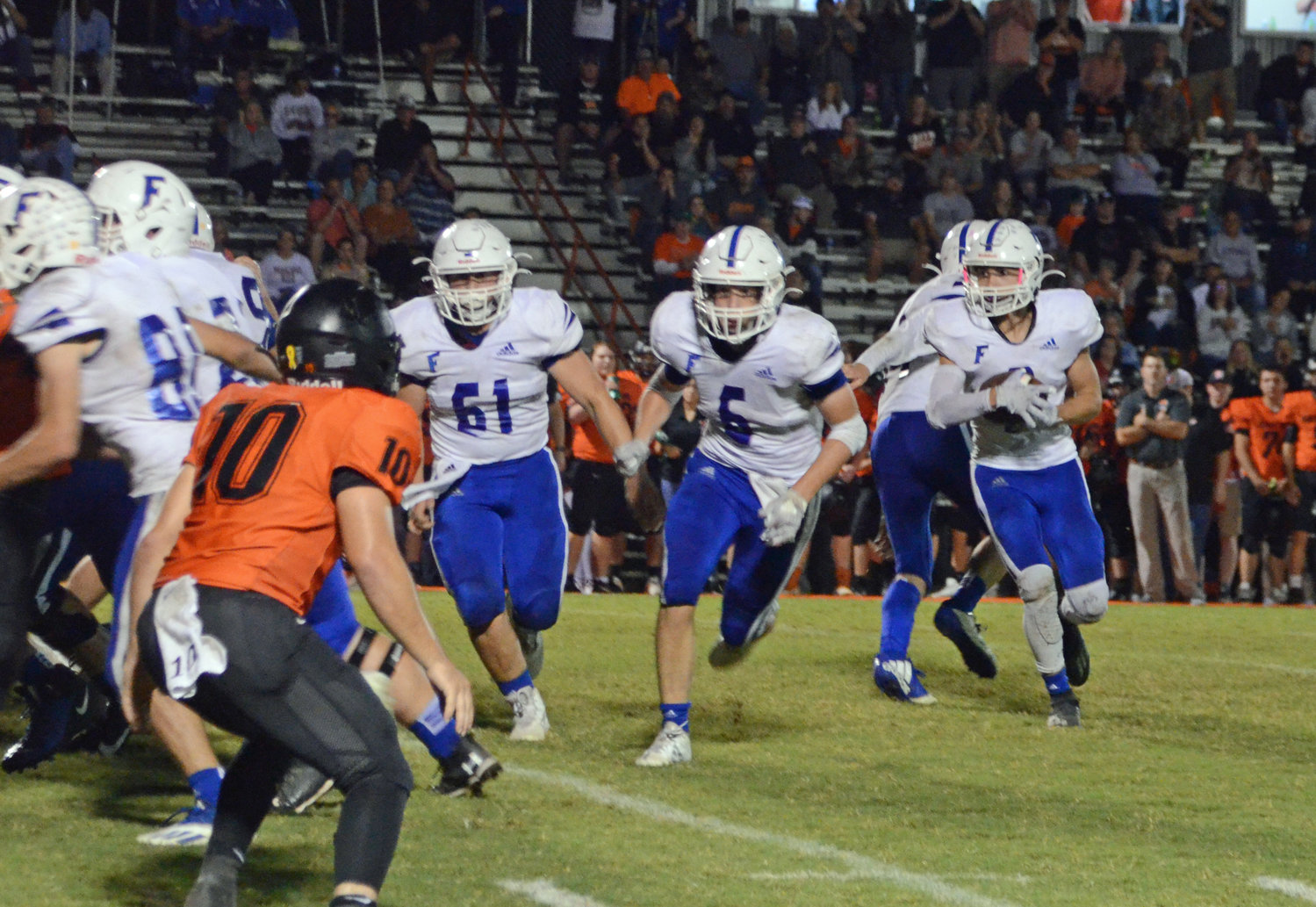 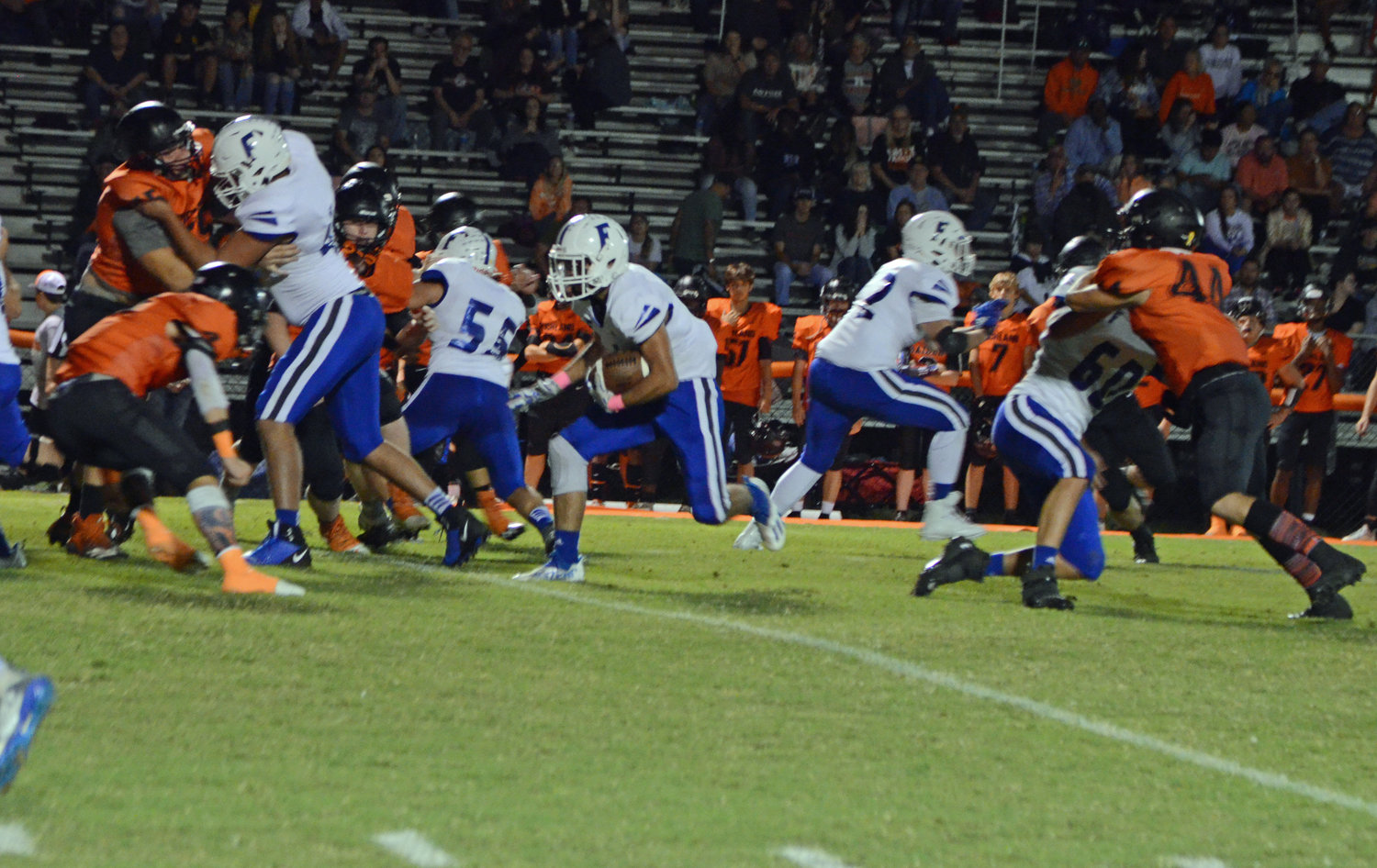 Forrest senior running back Chris Davis (1), who rushed for team-highs in yardage and touchdowns, runs through a huge hole created by his offensive line. 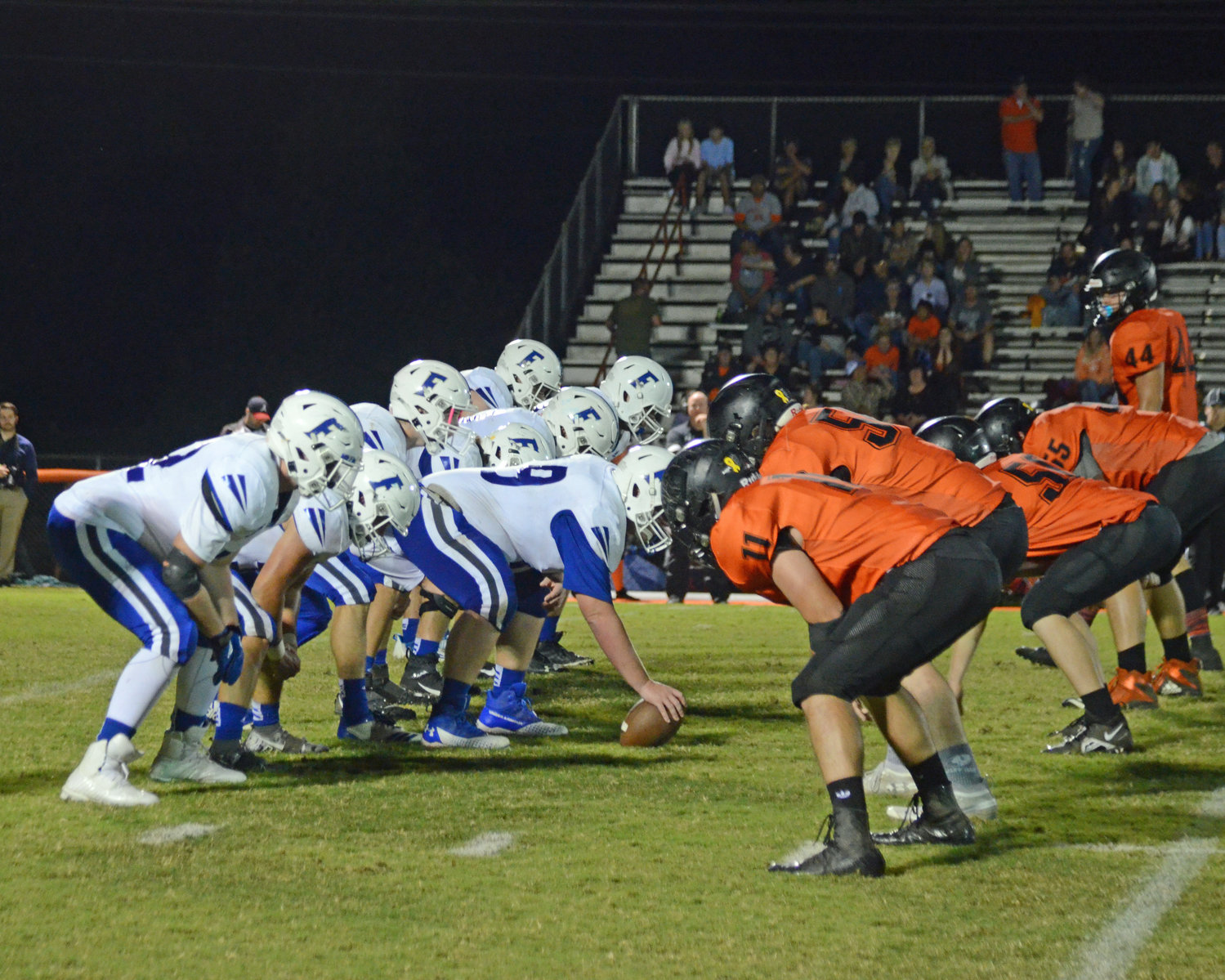 The Rockets ran for 306 yards behind a stout offensive line at Richland Friday night in a 28-14 win that clinched the Region 5/2A title. 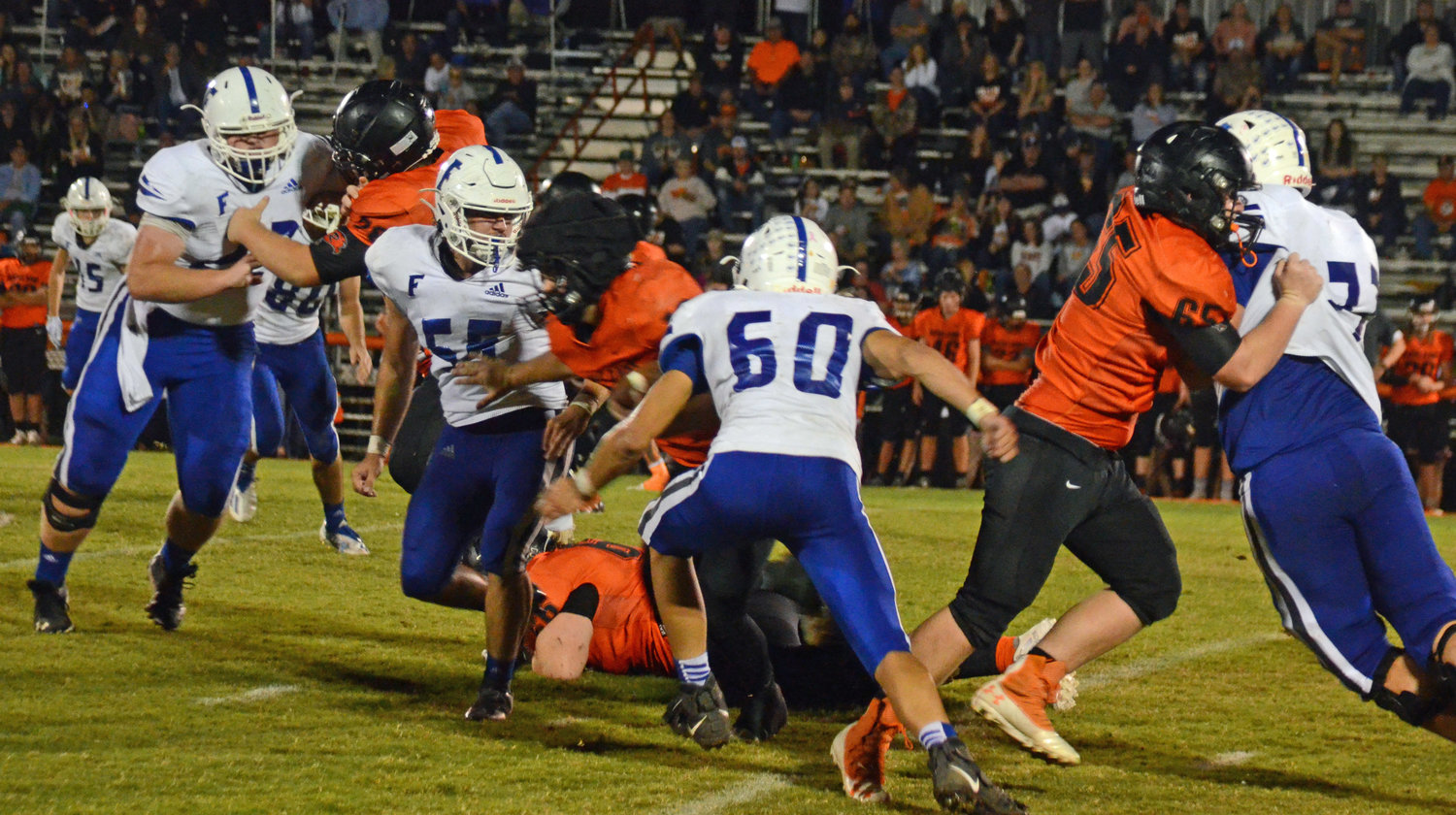 The Forrest defense held Richland to zero first downs in the second half.
Previous Next
Posted Monday, October 18, 2021 12:41 pm

“Our defense played well all night long, we got away from playing physical in the first half, but they got back to it in the second half,” Stephenson said.”
FHS coach Eli Stephenson
By Anthony S. Puca ~ Sports Writer

After shaking off some bye week rust in the first half, the Forrest Rockets played shutdown defense and scored twice in the second half to win 28-14 at Richland Friday night and secure the Region 5/2A title.

“This feels awesome,” Forrest coach Eli Stephenson said. “These kids deserve it, they work hard every day and they grind every day.”

“Getting it locked up early feels even better, so now we know where we stand in the region and we can get ready for our next two games.”

The Rockets (6-2, 4-0) outgained Richland 306-to-221yards and held the Raiders to just 16 offensive plays for 36 yards in the second half, including only five yards on the ground and zero first downs.

“Richland came out and gave us everything that we wanted,” Stephenson said. “We made some mistakes in the first half when we came out a little rusty from the fall break, but the boys righted the ship at halftime and we came out and took care of business in the second half.”

Forrest started out on shaky ground, fumbling the opening kickoff before the Rockets got the ball back when Braden Bowyer intercepted a second down pass by Bryce Miller and rambled to the Richland 30-yard line.

The Rockets turned the turnover in to points four plays later when senior Chris Davis scored on an 11-yard touchdown run.

“The opening kickoff was not good, but we got a big pick from our ‘D’ lineman Bowyer with the big man rumbling down the field and we were able to push it in after that,” Stephenson said.

Gavin Grissom nailed the first of his four successful extra points in the game and Forrest led 7-0 with 9:11 remaining in the first quarter.

The Raiders answered in just five plays that covered 83 yards with Ethan Workman capping off the drive by hauling in a 3-yard pass from Miller for a touchdown.

Jesse James made the first of his two successful extra points in the contest for the 7-7 tie with 5:50 left in the first quarter.

Forrest started its next drive at their own 27-yard line and lost a yard on first down before McCalister Wilson broke free for a 20-yard scamper near the midfield stripe.

A Richland personal foul a few plays later was followed by a Brenton Burchell 8-yard run and a big 23-yard burst by Davis for a first-and-goal at the Richland 8-yard line.

The Raiders bowed up on defense and held the Rockets out of the end zone until Davis crashed in on a fourth down play for a touchdown from the 1-yard line with 47 seconds remaining in the first quarter.

The Forrest defense held, forcing a three-and-out to take over again, but a series of penalties on the Rockets’ offense resulted in a Christian Hammond punt to the Richland 32-yard line.

The Raiders went 68-yards on just seven plays with Workman coming up with a 24-yard catch that sparked an Andrew Huff 6-yard touchdown run and the games was tied again at 14-14 with 2:44 remaining in the first half.

Forrest’s ensuing drive was spoiled by a Sam Edwards interception and the Raiders failed to score before the close of the first half.

The Chapel Hill defense forced a three-and-out on Richland’s opening drive of the second half and the Rockets turned the effort in to the go-ahead touchdown.

“We told them at halftime we had to play our game plan, we were getting out-physicaled up front and in the second half, we came out more physical and kept them behind the sticks and played ball,” Stephenson said.

Starting at their own 38-yard line, Forrest went on the move, driving 62 yards on eight plays with Tayton Swift capping off the scoring drive with a 2-yard touchdown run to make it 21-14.

Richland’s next offensive series lasted just 69 seconds with a three-and-out, but Forrest was also stopped and had to punt on the final play of the third quarter.

The Rockets were in prime form on defense and got the ball back for their offense after a fourth-down stop and this time, Forrest cashed in when Liam Bell scored on a 12-yard touchdown run to cap off a 50-yard scoring drive to put Chapel Hill up by two scores at 28-14 with 7:03 remaining in the contest.

The Raiders had no answer on offense as they were mired in a fourth-and-23 and had no option but to punt the ball back to Forrest with 4:40 left in the game.

“Our defense played well all night long, we got away from playing physical in the first half, but they got back to it in the second half,” Stephenson said.

The Rockets burned most of the remaining time off the clock to seal the win and their second region title in three years.

Davis led the Rockets’ big running attack with 81 yards on 12 carries and a two touchdowns.

Davis was hurt late in the game and his status for Friday night is unknown.

Bell had a lot of carries late in the game to burn the clock and finished with 54 yards on 11 touches and a score, Wilson toted the rock 10 times for 48 yards, Swift ran for 41 yards on six touches and one TD, and Burchell had 29 yards on eight carries.

“Our running game in the second half was huge, we knew when we got up one score that we had to run right at them and run the clock out,” Stephenson said. “Our line up front with the seniors (Layne) Strasser, (Brayden) Jones, (Colton) Cashion, and Bowyer moved the line of scrimmage tonight.”

Forrest quarterback Hunter Bennett went 5-for-9 for 53 yards and two interceptions while completing three passes to Swift for 41 yards and one six-yard pass to both Burchell and Hammond.

The ninth-ranked Rockets, who have not played a home game since September 17, entertain East Robertson (3-5) for a non-region game this week before finishing off the regular season schedule next week versus Mt. Pleasant (2-5, 1-3) at the Murrey E. Holton Memorial Field in Chapel Hill.

“This was one of our goals, but now our goal is to take it one game at a time in the playoffs and move on,” Stephenson said. “It’s also good to come home now with this region championship and play in front of our fans at home.”