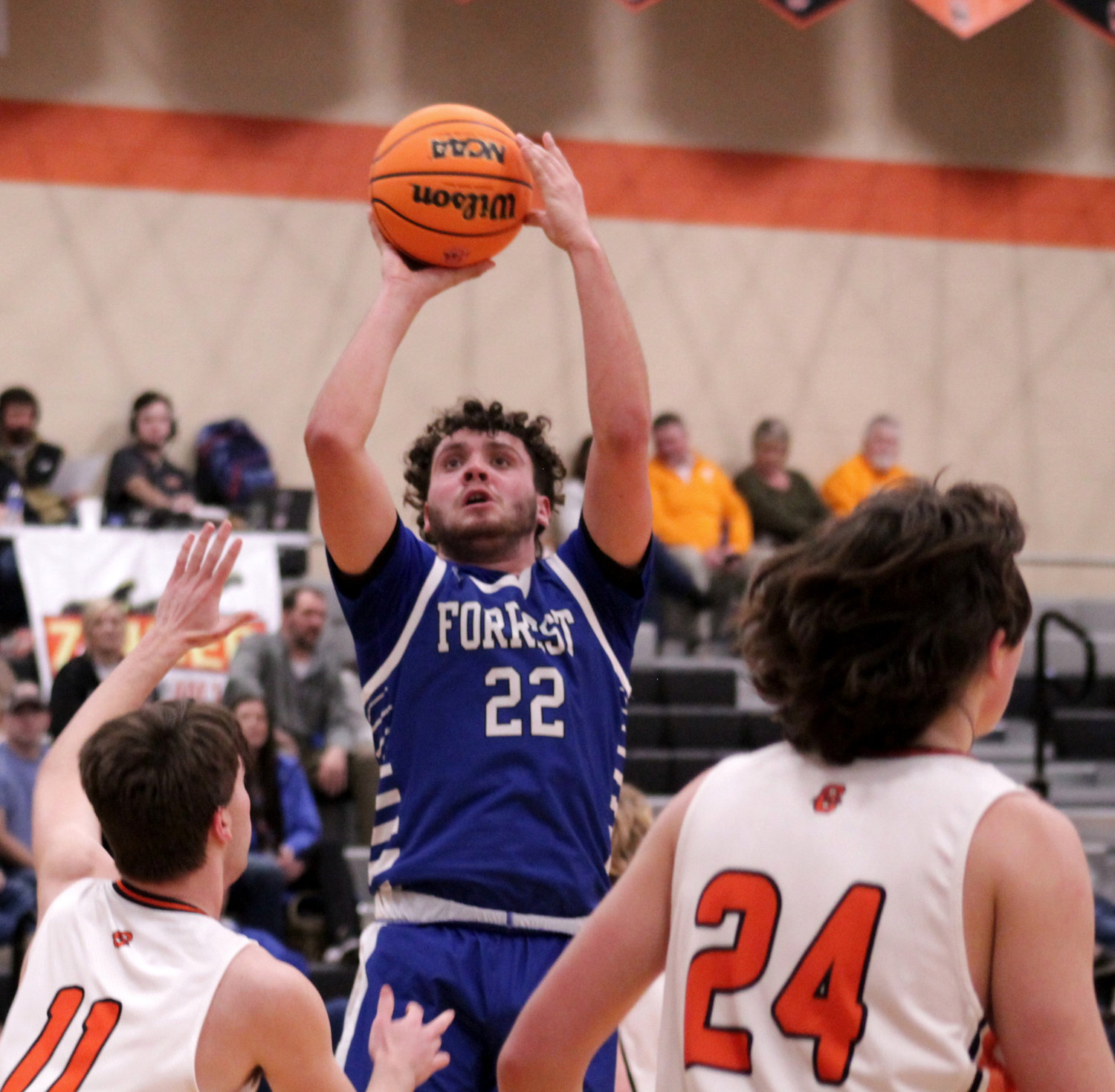 Davin Porter pulls up for a mid range jump shot in the second half and knocks it down. He finished with a game-high 26 points.
Tribune photos by Will Carter 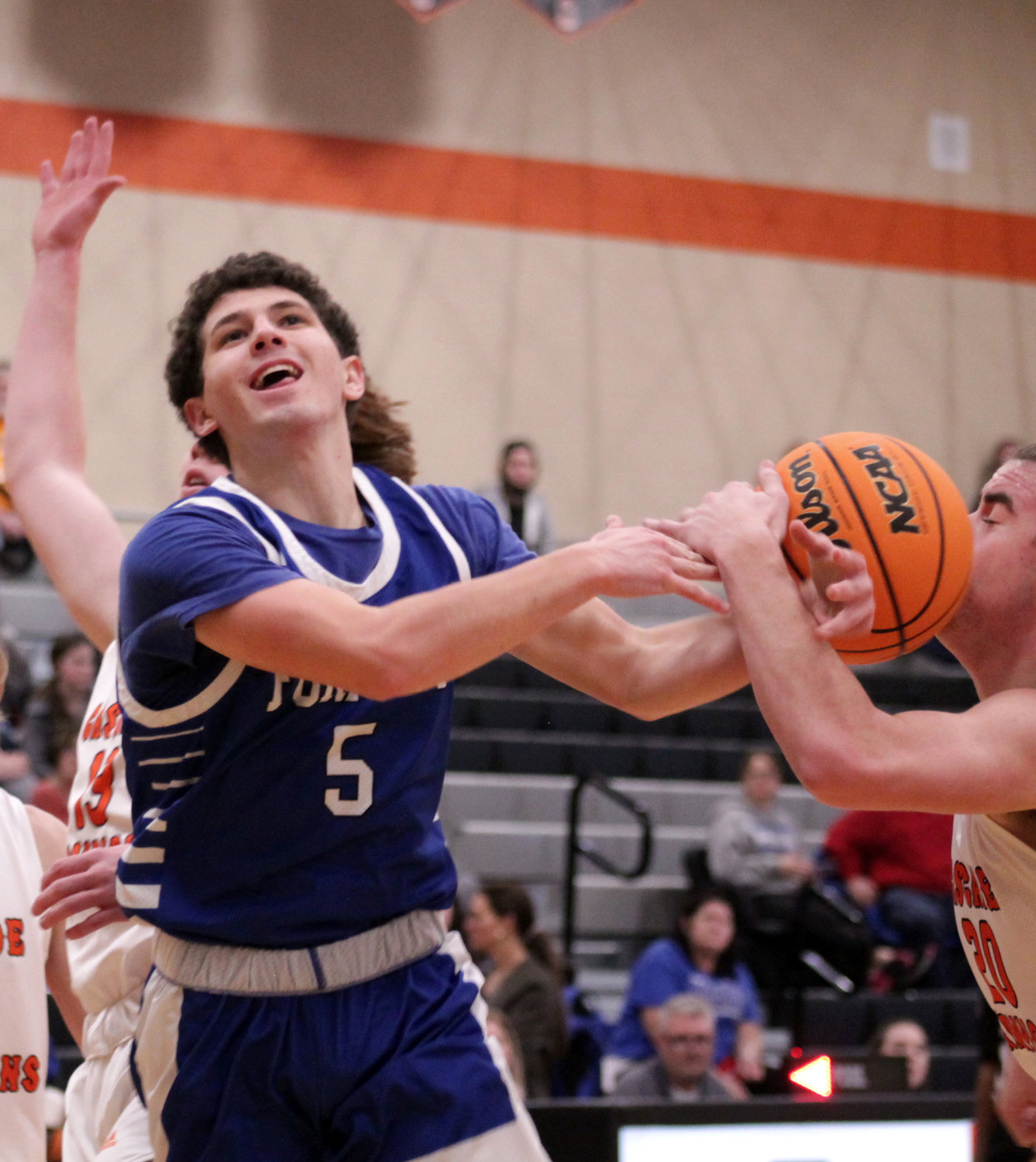 Jimmy Bond is fouled on his way to the rim against Cascade. He finished with four points.
Previous Next
Posted Thursday, January 19, 2023 12:05 am
By Will Carter - Sports Writer

BELL BUCKLE — It was an eventful night on the hardwood for the Cascade Champions and Forrest Rockets as both teams battled back-and-forth until the final seconds when the Champions were able to put the finishing touches on their 63-58 win.

After the baskets for Cascade, Forrest went on a 14-0 run until the final two minutes of the quarter to take a 14-5 lead.

“I’m super proud of how my guys played,” Forrest head coach Shane Chapman said. “It’s a fun game and a game you want to be a part of as a player and coach. The kids were battling. They (Cascade) didn’t have their best night, but they were able to do enough to get the win.”

Gentry broke up the run with a tough layup, and the Champions were able to close down their deficit to 19-13 heading into the second quarter.

Bray McCowan notched eight points in the quarter for Forrest.

Cascade opened the second quarter with a high-pressure defense in an attempt to limit the Rockets’ attack, and they found some success with it as they held them to a single digit quarter. But it wasn’t until the final two minutes that the Champions were able to grab some momentum back as Gulick found his rhythm from behind the arc.

Gulick knocked down three consecutive three-pointers to go on a 9-0 run of his own with just under two minutes remaining in the half, and the Champions grabbed the lead for the first time since the opening minutes.

“We needed somebody to step up and hit some shots, and that was Jayden Gulick,” Champs head coach Chris Lawson said. “He hit three threes in a row there that gave us a spark. Sometimes that’s what you need, and that’s what makes us a tough team. . Going down the stretch now, he has that experience of knowing he can hit the shots, so it will help us a ton.”

He totaled 18 points on the night with all of them coming from threes.

Cascade outscored Forrest 18-9 in the second frame for a 31-28 lead at halftime.

Coming out of the break, it was all Champions in the third quarter.

Cascade turned up their defensive pressure to start the second half which caused some problems for the Rockets and led to some fastbreak points on the other end.

Jackson Davis notched eight points in the quarter and Gulick knocked down another timely three-pointer to extend Cascade’s lead to 49-36 going into the final frame.

It was the only double-digit lead either team possessed throughout the contest.

But the Rockets wouldn’t go down without a fight.

Led by Davin Porter, the Rockets found a groove early in the fourth quarter as they went on a 13-0 run over the first few minutes to tie the game back up at 49-49.

Porter accounted for 14 points in the final frame to round out a game-high 26 points on the night for the Rockets.

“There’s been some times when we’ve told him to put the team on his back,” Chapman said. “Davin didn’t have a great game against Community, but came out tonight and played really well. When our guys can get it going, any of our guys can light it up on any night.”

After the run was broken up by a Gentry layup again, Forrest was able to take their first lead since the second quarter after Mason Harper knocked down a three-pointer with three minutes and 15 seconds remaining.

The lead changed hands a few more times for a total of four in the final frame.

On the next possession, Gulick hit his final three of the game to give the Champions a two-point lead.

A minute later McCowan knocked down his fourth three of the game to take back the lead for the Rockets in the last 60 seconds of the game.

Cascade took the lead back for the final time on the next possession when Davis found some space for a midrange jumper with 48 seconds remaining.

He later hit two vital free throws to make it a three-point game in the final 10 seconds.

On the final possession for the Rockets, they couldn’t find enough space for the game-tying shot and Cascade grabbed the rebound as the clock wound down.

Saebyn Burris was fouled on the play to preserve time, but he knocked down both of his free throws to ice the game and secure the victory for Cascade.

“I told the guys in the locker room that basketball goes this way sometimes,” Lawson said. “There’s gonna be nights where you just don’t play well and the other team does play well. Forrest played well tonight. They came out and shot the ball really well and got the ball in the paint some for layups.”

“I told our guys that a mark of a really good team is finding a way to grind a win out sometimes.”

While the loss hurts, Chapman was proud of how his team fought on the road and is looking forward to the next matchup with the Champions when they travel to Chapel Hill.

“Super proud of the effort my guys played with tonight,” he said. “This is the kind of effort and production I’ve been looking for all season long. We’ll see them again when they come to our place in a couple weeks.”

Cascade will be back in action on Friday as they host Fayetteville City while Forrest has some time off before they host Grundy County next Tuesday.