WARTRACE — The Forrest Rockets built a 10-point lead early at district-leading Cascade (20-7, 5-1) on Friday night, but couldn’t close out the game in a 64-55 loss to the Champions.Night … 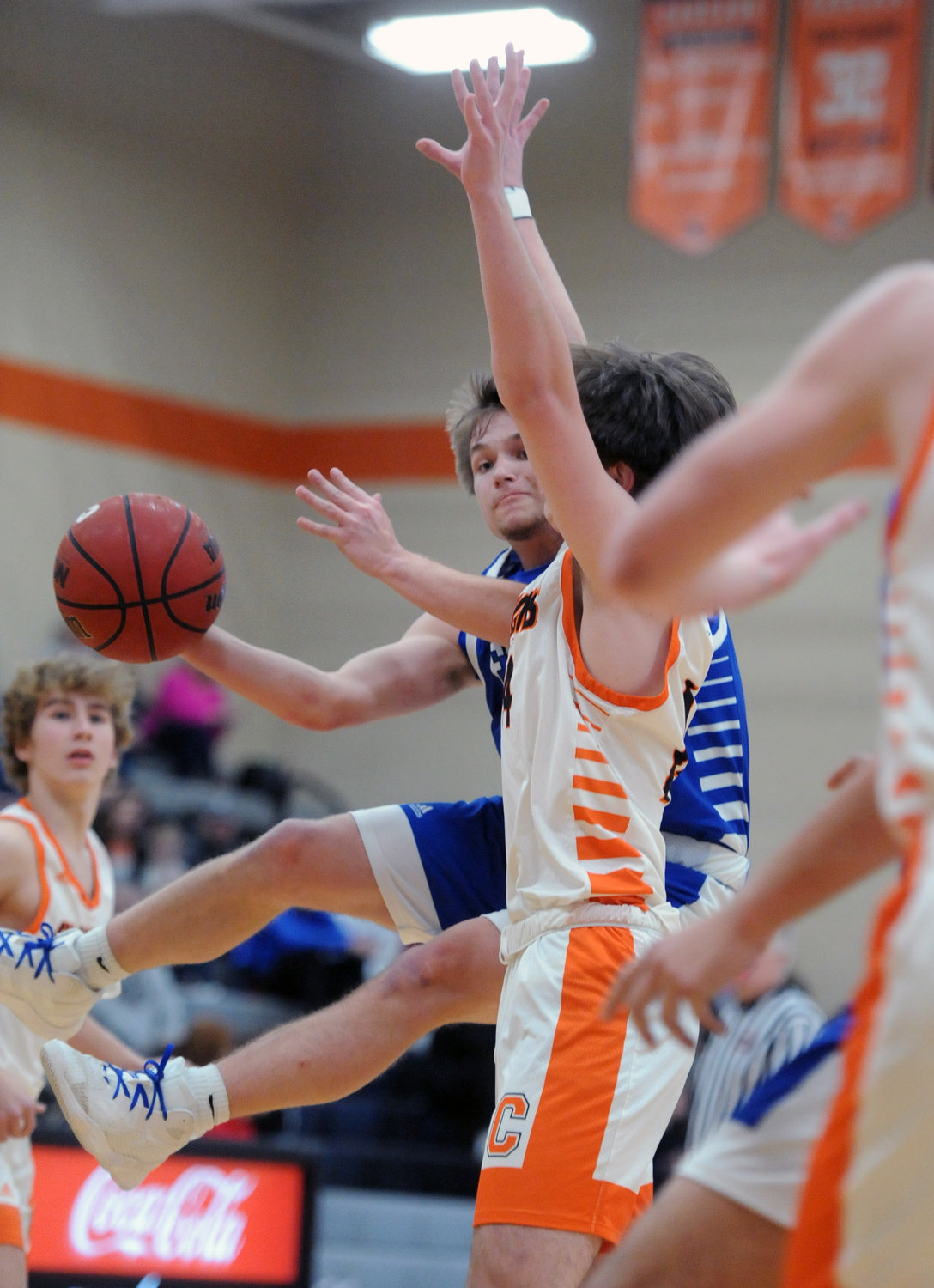 Andrew Timmons makes an acrobatic move through the Cascade defense and finds Hunter Bennett off the block for an easy two points.
Tribune Photo by Chris Siers 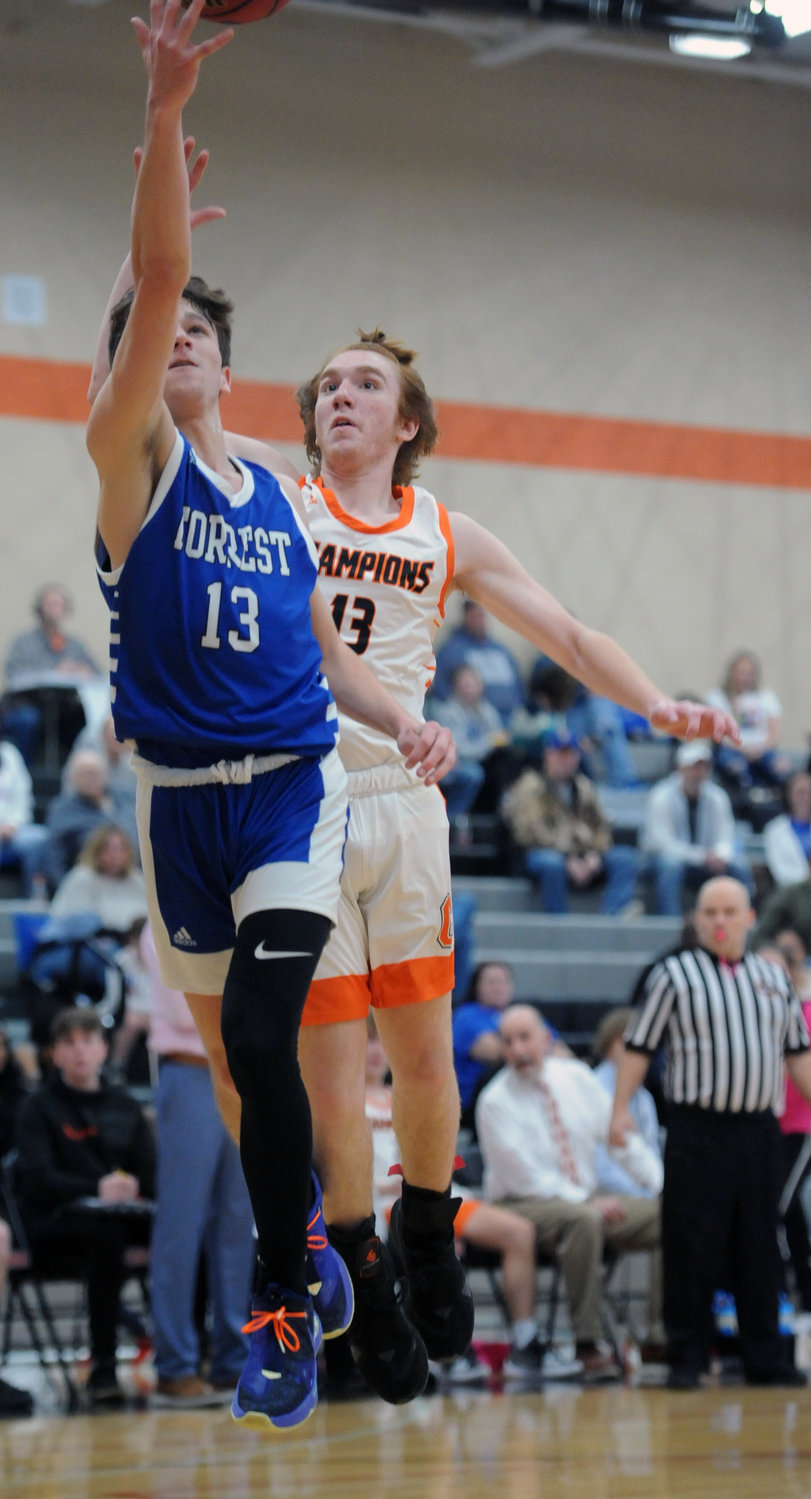 Deason Jones goes up for the layup after coming up with steal against Cascade.
Tribune Photo by Chris Siers
Previous Next
Posted Tuesday, February 15, 2022 10:45 am
By Chris Siers ~ sports@t-g.com

WARTRACE — The Forrest Rockets built a 10-point lead early at district-leading Cascade (20-7, 5-1) on Friday night, but couldn’t close out the game in a 64-55 loss to the Champions.
Night in, night out, Rocket head coach Shane Chapman has gotten used to Hunter Bennett playing at a high level.
Friday night was no exception as Bennett, along with Brennan Mealer, leading the Rockets (10-14, 2-4) in the first quarter.
Our guys play hard night in and night out. You can’t take anything away from Cascade. They’re a No. 1 seed in our district for a reason. They play really hard. They have one of the best players in the district with Justis (Carter). Hopefully we can get another shot at them down the road,” Chapman said.
Bennett was able to penetrate and drive the lane, particularly in the first half, while Mealer heated up from the perimeter.
Mealer knocked down a pair of 3-pointers in first half and if not for a pair of timely 3-pointers by Cascade’s Lucas Clanton, Forrest could well have sat with a double-digit lead after the first quarter.
Leading 19-11 after the first quarter, it was Cascade’s turn to get hot shooting the ball and the Champs started the second quarter on a 6-0 to cut the Rocket lead to one possession with just under seven minutes to play in the half.
A Deason Jones 3-pointer swished the net to end the cascade run and preserve the one-possession Rocket lead with 6:38 left in the half.
The two teams traded baskets until Cascade eventually tied the game at 29 apiece with 1:15 when Zach Crosslin hit a layup and drew the foul, but was unable to connect on the ensuing free throw.
Andrew Timmons followed with a basket with 15 seconds left in the half to once again give Forrest a two-point lead heading to the half.
While Chapman was able to rely on Bennett driving to the rim and Mealer’s shooting in the first half, Cascade adjusted in the second half on the defensive end of the court, limiting Mealer’s effectiveness from the perimeter.
“Our support staff came in tonight and did a good job. Brennan Mealer shot the ball well. They closed down on him in the second half and he wasn’t able to get loose like he did in the first half. Some of those guys have stepped in and made some big shots throughout the season. We just need those guys to come in and give us that effort night in and night out in the tournament,” Chapman said.
Cascade tied the game early in the third on another basket by Clanton before Bennett answered with another go-ahead shot.
The two teams swapped control of the scoreboard four more times before Justis Carter hit a layup in transition at the 2:45 mark of the third.
Cascade never trailed again.
After managing just 1-of-3 attempts at the free throw line in the first half, Cascade was able to effectively get to the line in the second half and finished 15-of-21 attempts for the game, with eight made free-throws coming in the fourth quarter.
During that fourth quarter, Cascade piled up 22 points, edging out the 16 scored by the Rockets.
Although Cascade had rallied to take control of the scoreboard, Forrest was never truly out of striking range and after another 3-pointer by Mealer with 3:41 left in the game, Cascade led by just five points.
But after Mealer’s shot, Forrest managed just four more points, while Cascade closed the game by scoring eight to preserve the nine-point win.
Clanton’s 19 points led all scorers, while Carter added 13 for Cascade.
Bennett’s 14 points, along with Mealer’s, led the Rockets as the pair combined for 28 points against Cascade.
Bennett has been a spark plug for the Rockets of late and Chapman says his leadership will be key moving into the postseason.
“Dude is playing his rear end off. I’m super proud of the way he played. Our three seniors, even last night with senior night, really played hard and laid it on the line. I think the rest of our team will follow their leadership and Hunter Bennett is a big part of that,” he said.
Forrest openes the District 7-AA tournament on Tuesday night against Community.
With only four teams in the district, all four will play again in either the championship or consolation round, which will be held at Community on Friday evening.