CHAPEL HILL — The Forrest Rockets left it all on the floor as they hosted Fayetteville City Tuesday night, falling to the Tigers 37-35.

Out of the gate, it was an aggressive and fast-paced … 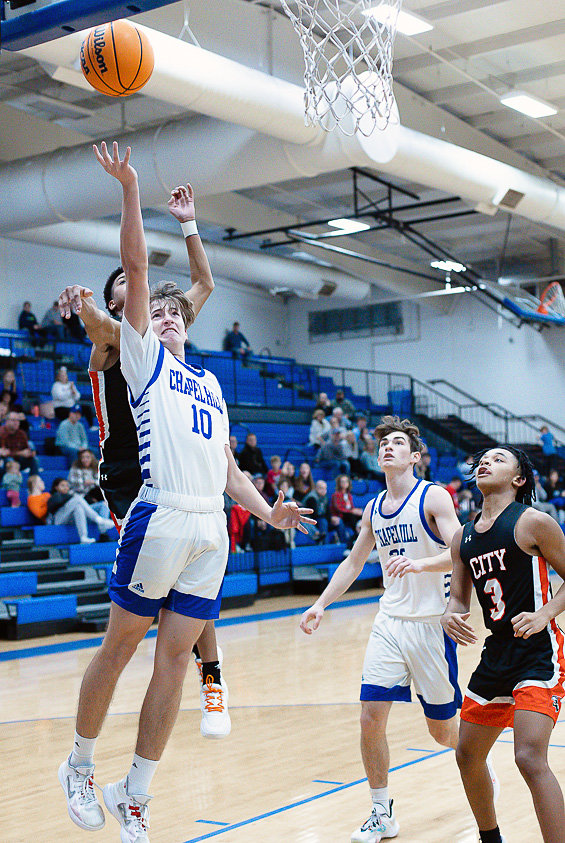 Eli Bell hits a much-needed shot in the 4th quarter for the Rockets.
Tribune Photo by Kacy Kincaid
Posted Wednesday, December 7, 2022 3:49 pm
By Kacy Kincaid ~ Sports Writer
CHAPEL HILL — The Forrest Rockets left it all on the floor as they hosted Fayetteville City Tuesday night, falling to the Tigers 37-35.
Out of the gate, it was an aggressive and fast-paced ballgame, the Tigers bringing a full-court man-to-man press forcing multiple Rocket turnovers throughout the game.
Fayetteville City had some trouble knocking down shots to begin with, stifling their lead potential to only six after the first quarter.
The Rockets regained control in the second quarter, their best of the game, with Davin Porter, Ben Villazon, and Bray McCown combining for 11 points and holding the Tigers to a meager five.
The contest was an even split at 19 going into the half.
Although the Rockets’ struggle to handle the ball remained, there was no letting off the throttle for either squad upon returning for the second half. It was a tough scoring battle, each bucket made being answered on the other end.
Forrest entered the fourth down by three.
Fayetteville City found most of its points at the free throw line in the fourth, with Bryson Johnson getting tough to handle in the paint.
Forrest’s Jimmy Bond, Eli Bell, and Josh Rumley showed up strong for the Rockets, keeping them in the game offensively.
With only a few seconds left in the game and the Rockets down by two, they put up a shot that didn’t fall in their favor.
Porter led the Rockets with 15 points on the night and Johnson led the Tigers with 13.
The Rockets are back in action Friday night at home against Liberty Creek. Tipoff is set for 7:30 pm.
Fayetteville City 14   5 11 7 — 37Forrest   8 11   8 8 — 35
Fayetteville City: Cambrian Taylor 4, Samuel Willoughby 7, Teondre Love 4, Kentius Henderson 4, Bryson Johnson 13, Philip Bonner 3, Latral Brown 2Forrest: Ben Villazon 4, Bray McCown 6, Jimmy Bond 4, Eli Bell 2, Josh Rumley 4, Davin Porter 153-point goals: Fayetteville City: Bonner, Willoughby; Forrest: PorterHalftime score: Forrest 19, Fayetteville City 19