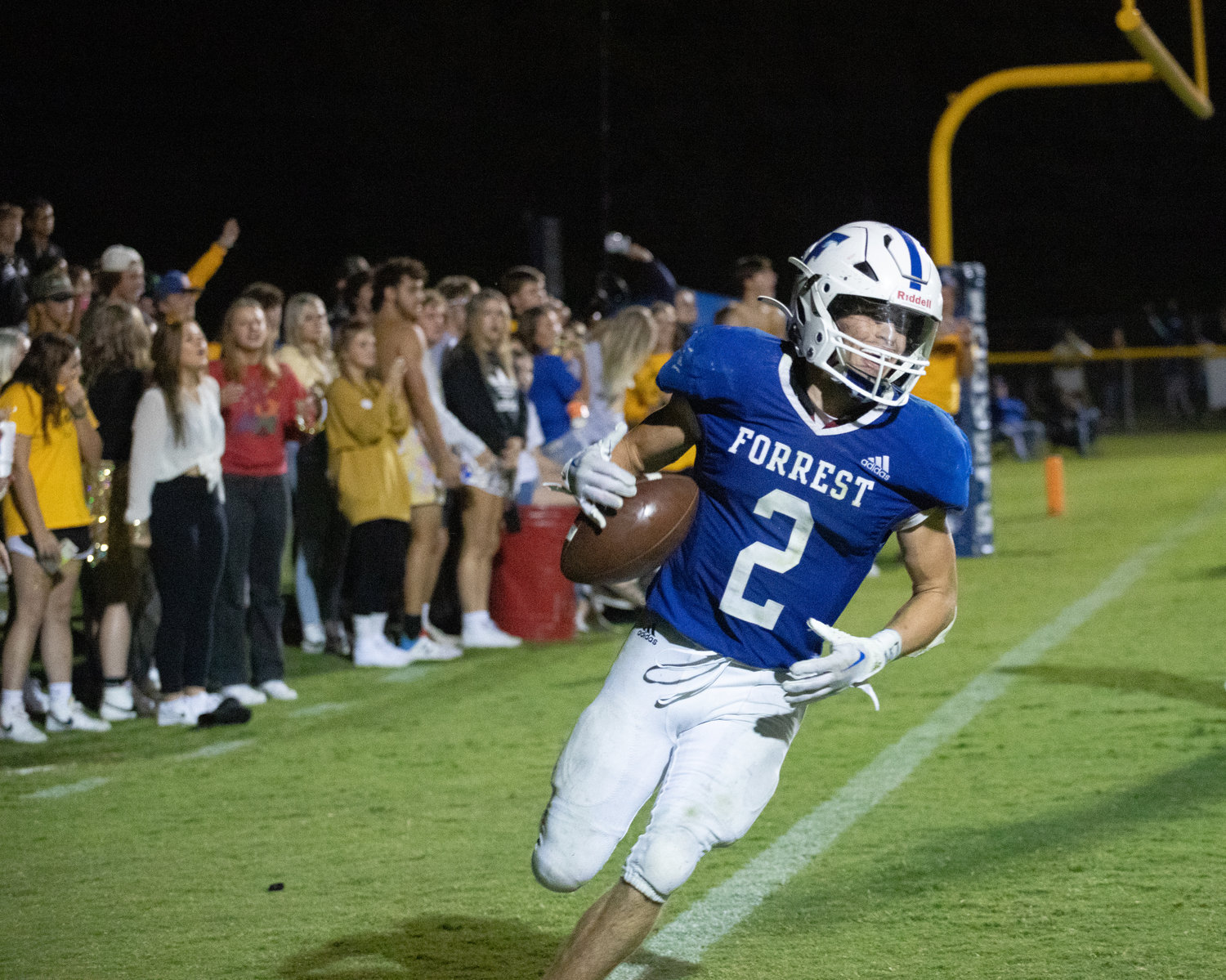 Tayton Swift scores on the two-point conversion for the Rockets.
Tribune Photo by Kacy Kincaid 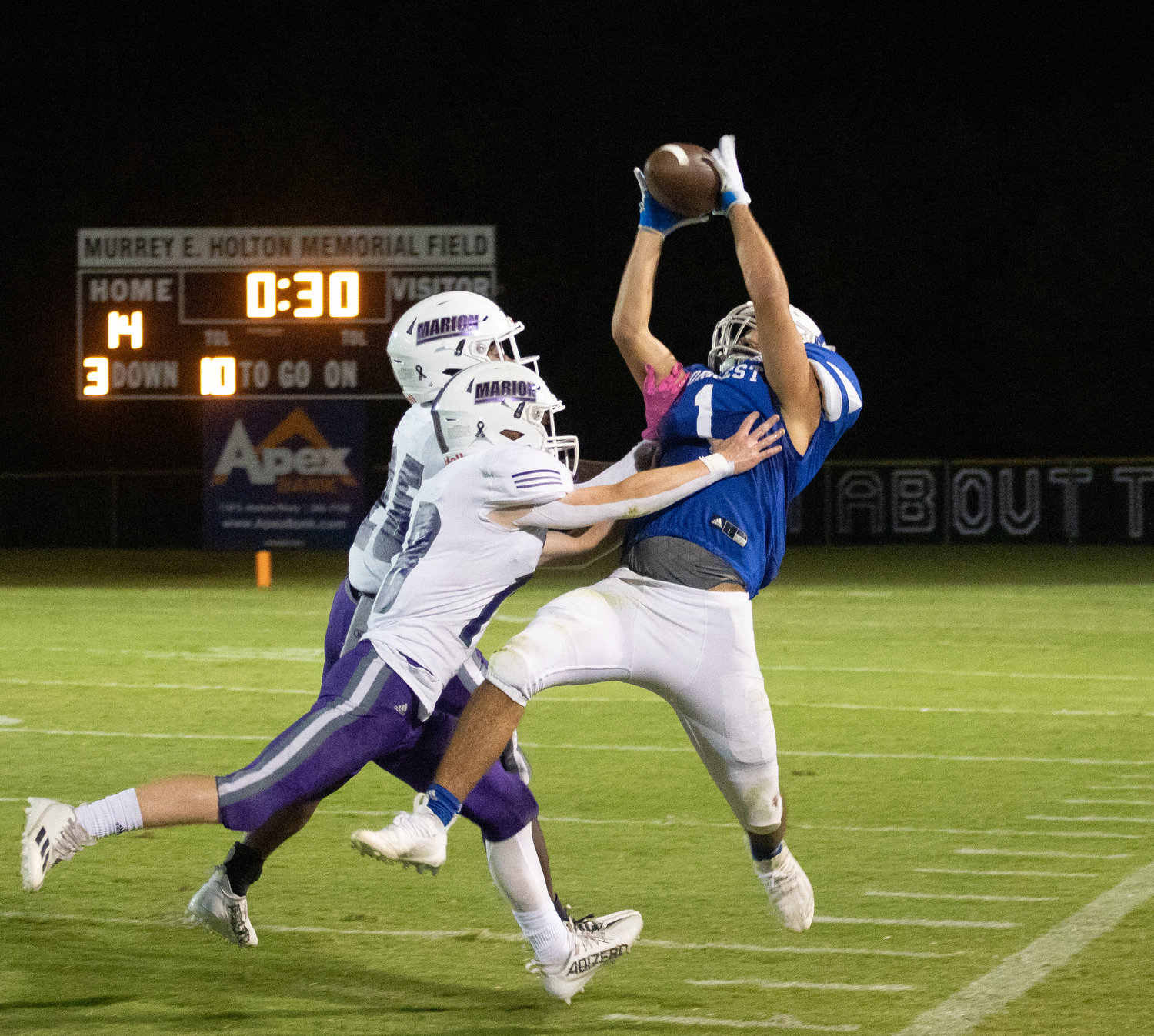 Chris Davis goes up for the catch and makes the grab for Forrest.
Tribune Photo by Kacy Kincaid
Previous Next
Posted Thursday, September 29, 2022 12:37 pm
By Kacy Kincaid ~ Sports Writer

CHAPEL HILL — It was an all out battle at The Rock Friday night between the Forrest Rockets (3-3, 1-1) and the Marion County Warriors (3-3, 1-1), with the Rockets falling just short, 42-35.
Too bad ‘almost’ doesn’t count.
Eli Stephenson’s Rockets left it all on the field, proving their strength and tenacity against setbacks.
“I’m very proud of the way we played,” Stephenson said. “We didn’t run away from the fight, we ran toward it.”
The Rockets didn’t waste any time, coming out on the first possession covering 76 yards over eight plays that resulted in a five-yard touchdown carry from senior Tayton Swift, who led the Rockets offensively with 138 yards.
After the extra point from Gavin Grissom, the Rockets take the lead, 7-0.
Quick to respond, Sam Pickett had a nice kickoff return, placing the Warriors at the 49, where running back E.J. Wilson took over, going the rest of the way on the next drive.
The extra point attempt failed, the Rockets hanging on to the lead at 7-6 with 8:05 left in the first quarter.
It was the Rockets turn again with Swift and Liam Bell both completed first downs.
Quarterback Ryan Hill then connected with Chris Davis on a 13-yard pass and on the next play, it was Davis again, taking off on a 31-yard gain to land the Rockets at the seven-yard line.
Bell grabbed another six yards, allowing Hill to dip into the end zone from the one.
Grissom added the extra point, Forrest extending their lead to 14-6.
Marion County was forced to punt on their next possession thanks to big stops from Luke Swihart and Reggie Pearson.
Things started to really heat up in the second quarter. In five plays, the Warriors dig up their next touchdown, quarterback Tilton Pickett finding S. Pickett on a 38-yard pass.
Marion County successfully attempted the extra two, evening the score at 14-14.
After the Rockets were showered with flags, backing them up to their own 10-yard line, the punt was forced and Marion County took advantage.
With 4:53 left in the half, T. Pickett connected with S. Pickett in the end zone on a 16-yard pass. The kick was good and the Warriors took a 21-14 lead.
The tussle continued, with a slew of Rockets coming together to keep moving the chains.
Freshman Antonio Marable came up with a 12-yard run, making it easy for Bell to carry out the first down.
Marion County was charged with targeting and encroachment, aiding the Rockets’ move into Warriors territory.
With less than two minutes to go in the half, Hill threw a perfect pass to Carson Yates, who worked his way to the one-yard line, allowing Hill to score with the quarterback keeper on the next play.
The extra point attempt failed, however, leaving the Rockets trailing by one.
Maintaining the status quo, Marion County executed with a handful of plays, finding themselves back in the end zone with 28 seconds left in the first half and a 28-20 lead.
Entering the second half, the Warriors consistently dug themselves out of third and fourth down holes, but Forrest did not make it easy, a multitude of Rockets making big stops.
Bryce Tankersley covered on an incomplete pass on third down, Marion County then making the decision to kick the field goal, which didn’t make it through the uprights.
Rockets gained possession and Hill came up with a critical first down on the drive and Swift picked up 34 yards to put the Rockets in Warriors terrain.
Hill connected with Tyler Ayers on a 19-yard pass and Eli Bell was able to convert on a 15-yard touchdown run. Thanks to big-time blocking by Spence Tankersley, Swift added the extra two, leveling the score at 28 with 3:12 left in the third quarter.
The Rockets’ defense showed up and showed out to finish the quarter, Pearson, B. Tankersley, E. Bell, and Swift all making crucial stops, forcing a Warriors turnover on downs, where the Rockets took over at their own five yard line.
To start the fourth quarter, the Rockets just weren’t able to convert, being forced to punt after a pair of penalties and allowing Marion County to begin their drive on the Rockets 25 yard line. In only four plays, the Warriors once again crossed the goal line, taking the lead.
Making sure to respond, Hill threw a solid 42-yard pass to Yates, putting the Rockets on the Warriors 17 yard line. A couple minutes later Forrest punched another one in to tie up the game at thirty-five.
The rest of the fourth was a defensive war, both teams being forced to punt on multiple possessions.
But, in the end, Marion County capped off the evening with a 79-yard touchdown trek from S. Pickett with only 22 seconds left to play.
“I know we came up short,” said Stephenson, “but I thought we played four quarters. The players gave it their all, and that is all I can ask for.”
Stephenson continued, “We got to play with the same intensity and effort for the rest of the way out. We got to build off of the Marion County game to keep getting better.”
Forrest will host the Cascade Champions at home for a regional matchup on Friday.
Kickoff is set for 7pm.