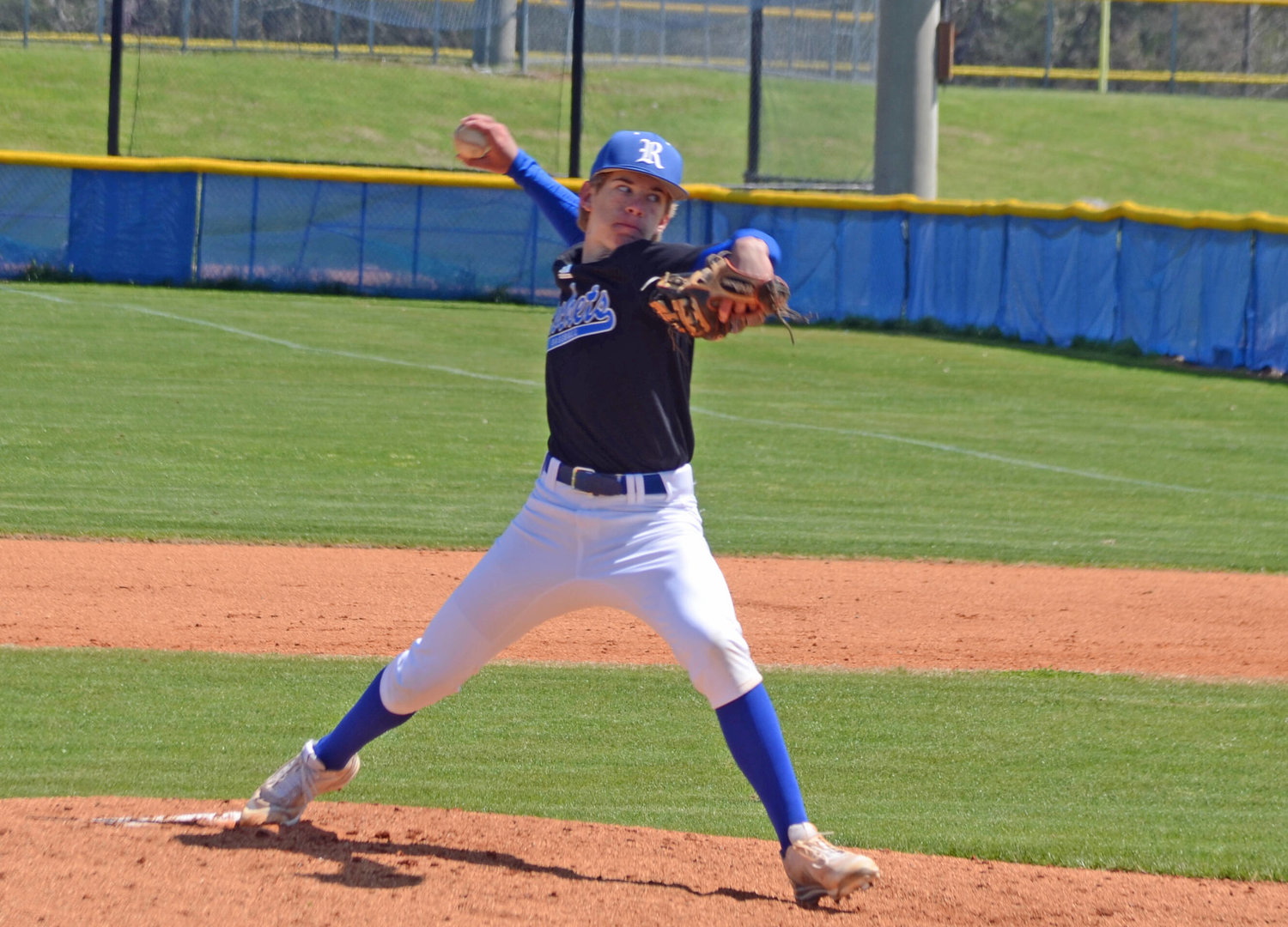 Forrest freshman Preston Gentry came on for an injured Braden Bowyer in the third inning and picked up the win on the mound for the Rockets, who came back to beat the Page Patriots 8-7 at Chapel Hill Friday night.
Tribune photos by Anthony S. Puca 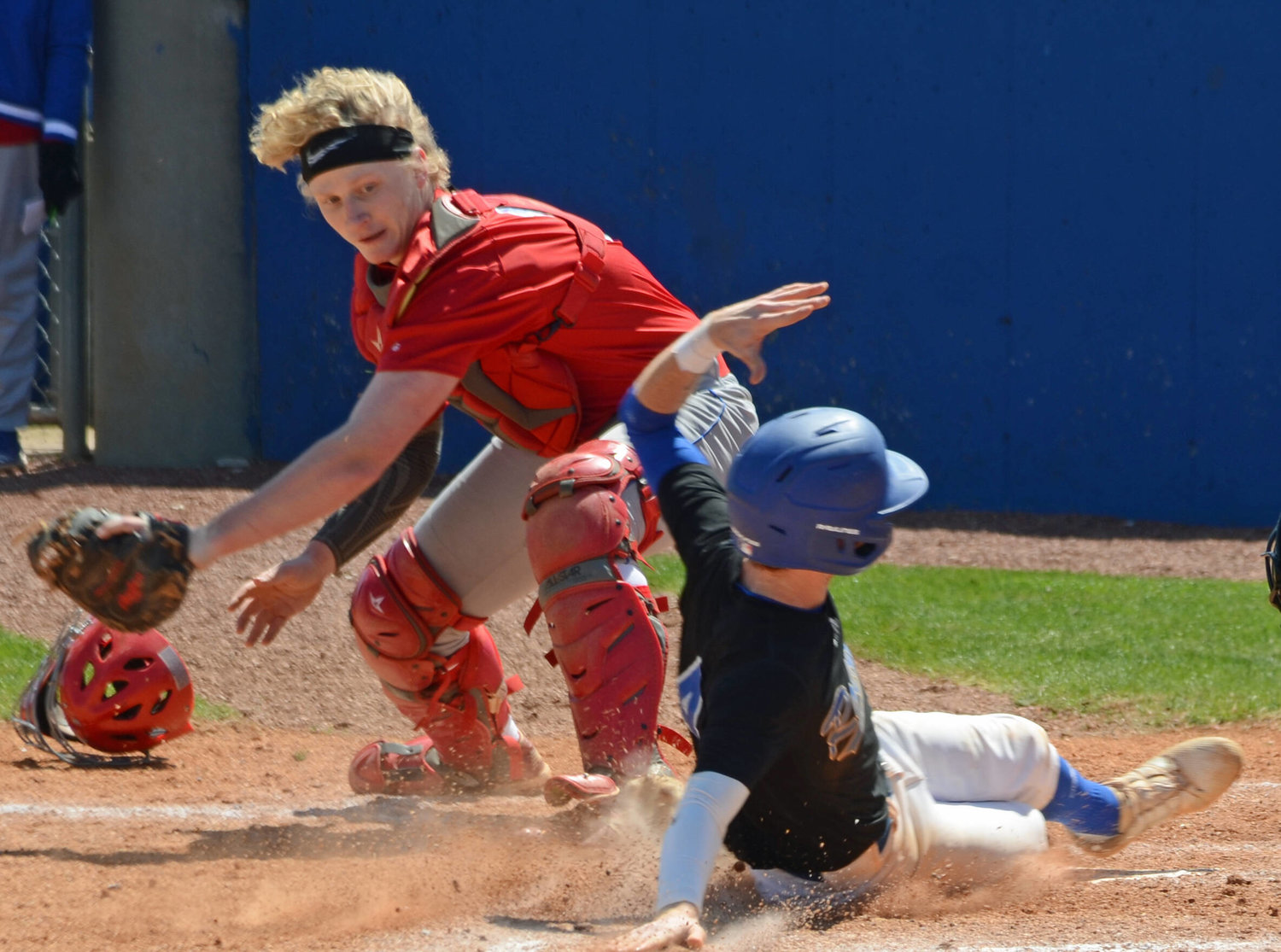 Cannon Cervantes, who scored three runs in the contest, slides safely home in the bottom of the second inning. 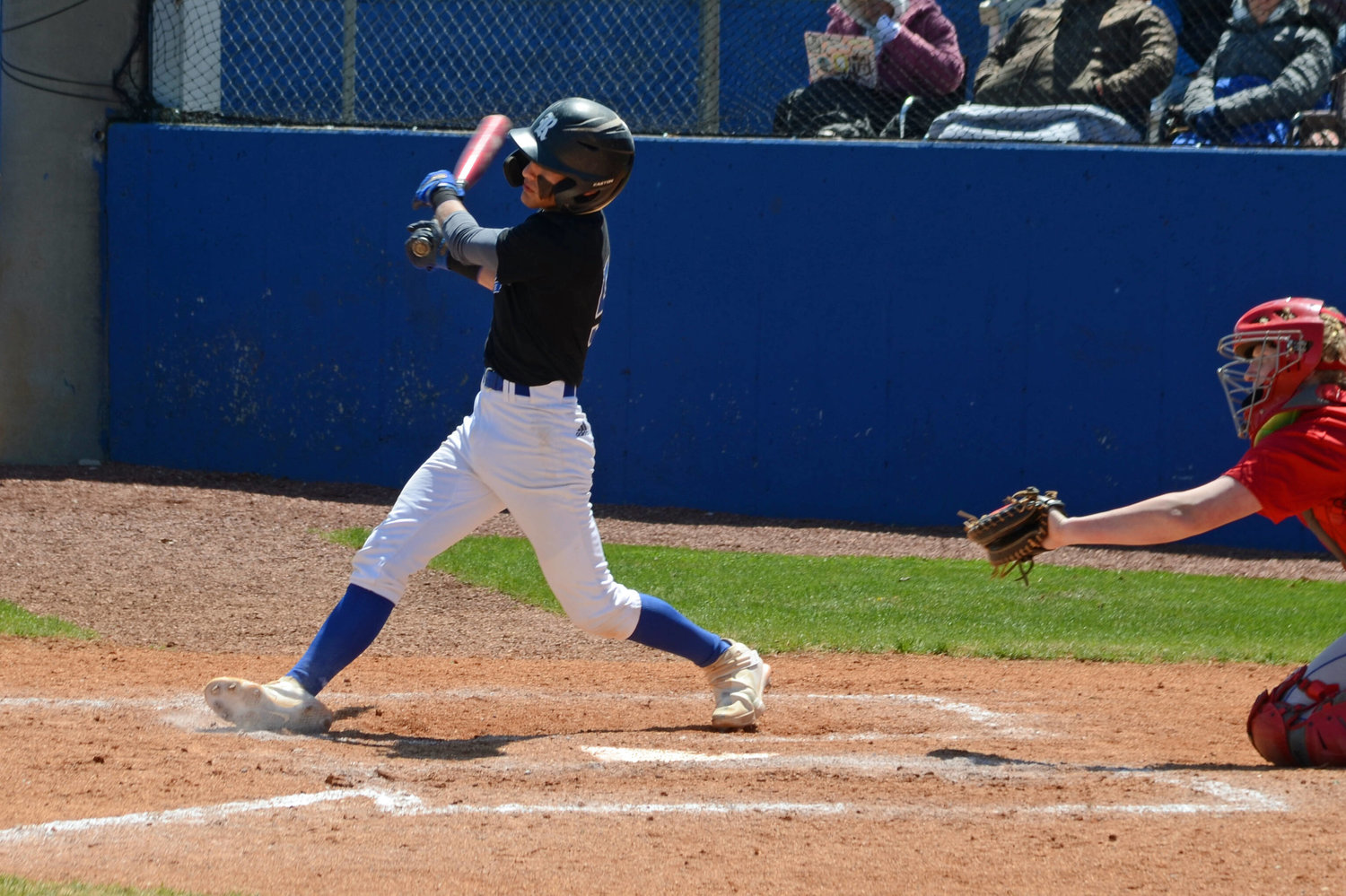 Forrest leadoff batter Camden Vaughn, who went 2-for-4, drives in a first inning run for the Rockets.

Forrest second baseman Bryson Smith, who had the go-ahead RBI in the fourth inning, tries to turn a double play in the bottom of the first inning.
Previous Next
Posted Sunday, April 4, 2021 11:00 pm
Anthony S. Puca Sports Editor

The Forrest Rockets (7-2, 1-1) picked up their third win in a row Friday night at Chapel Hill, coming back for an 8-7 win over the Page Patriots.

“I think one of the big trademarks of our team is that we got great team chemistry, but on top of that team chemistry, we play fantastic defense as well,” Forrest coach Andy Burkett said. “Our guys got behind our pitchers today, they hit it, but we were able to make the plays to win the ballgame.”

The two squads have played 15 times since 2003 with the Rockets leading the series 9-6.

“We love playing those guys, coach (Kenny) Roeten always has that team ready to go,” Burkett said. “We love the competition like that.”

“We play our district games on Monday and Tuesday, but when we go for scheduling, we want to schedule opponents like Page, so we can get a ballgame like that right there and the people that paid admission got a good ballgame, that’s for sure.”

The next matchup is April 23 at Rudderville.

Braden Bowyer started on the mound for the Rockets and gave up a first-inning unearned run.

During the first inning, Bowyer was hit on the foot on a line drive back to the mound that he fielded and threw to first for the second out.

Bowyer tossed a scoreless top of the second and gave up a leadoff base hit in the top of the third inning before giving way to freshman Preston Gentry, who turned in a yeoman’s job on the hill and was the eventual winning pitcher.

Gentry pitched the next four innings, giving up four runs on seven hits while striking out one and walking two Page batters.

Things looked good for the Rockets early on, plating five runs on four hits in the bottom of the first inning as they sent 10 batters to the dish with Page helping out with a pair of infield miscues.

Bryson Smith, Austin Lampley, Justin Gillespie, and Camden Vaughn all had one RBI in the frame.

Bowyer tossed a scoreless second inning and the Rockets scored a run in the home half of the inning as Cervantes led off with a base hit and ended up on second after a wild throw.

Cervantes went to third base on a wild pitch before scoring on a sacrifice fly RBI by Smith.

Gentry came to the mound for Bowyer in the top of the third and the Patriots got one run on a fielder’s choice RBI by Tripp Hancock to make it a 6-3 contest.

Jackson Maxwell came on in relief for the Patriots in the bottom of the inning and set down the Rockets 1-2-3, including a pair of strikeouts.

Page went on the offensive in the top of the fourth inning as the sent nine batters to the plate and scored four runs off Gentry to take a 7-6 lead.

Easton Snider, Lorne Steele, Hancock, and Kale Hutchison all one RBI in the comeback inning for the Patriots.

Vaughn led off the home half of the inning with a base hit to center field and Cervantes followed with some more speed as he beat out a swinging bunt and a wild throw put Rocket baserunners on the corners with no outs.

Cervantes stole second base before Max Kirby tied the game with an RBI sacrifice fly.

Cervantes took third on a groundout and Smith stepped in the batter’s box and drilled a double to left field and Cervantes trotted home with the go-ahead run to make it 8-7.

Gentry induced three straight ground ball outs for a 1-2-3 top of the fifth and the Rockets did not score in the home half of the inning.

Gentry ran in to big trouble in the top of the sixth as the Patriots loaded the bases with one out, but the young righty got out of the inning on a pair of shallow outfield fly outs.

Forrest left a pair of baserunners on in the bottom of the sixth inning and Cervantes came to the mound to try to close the game out for the Rockets.

“It was unfortunate that Bowyer took that line drive to the foot the way it was, he toughed it out there in the third inning, we knew he was ginger with it,” Burkett said. “I got some talented freshman right now and Preston Gentry is at the top of that list, he absolutely did his job today in relief, he did everything that was asked for him in that role and he picked up a nice win.”

Cervantes thrives in the closer role and the senior showed it as Page got a one-out base hit before a grounder to Kirby at third base and a fly ball to Carter Walk in right field closed the door in the non-district win.

“You can’t say enough about Cannon Cervantes, that guy is a veteran senior and when it comes to pitching on the mound, there is nobody I would rather have in the seventh inning than him,” Burkett said.

The Rockets entertain District 12-AA foe Marshall County (3-3, 0-2) tonight in the first of the two home and away intra-county ballgames with first pitch scheduled for 6:30 p.m. in Chapel Hill.

The Tigers are coming off a 14-4 win over Cascade at Joe George Field in Lewisburg last Thursday night.