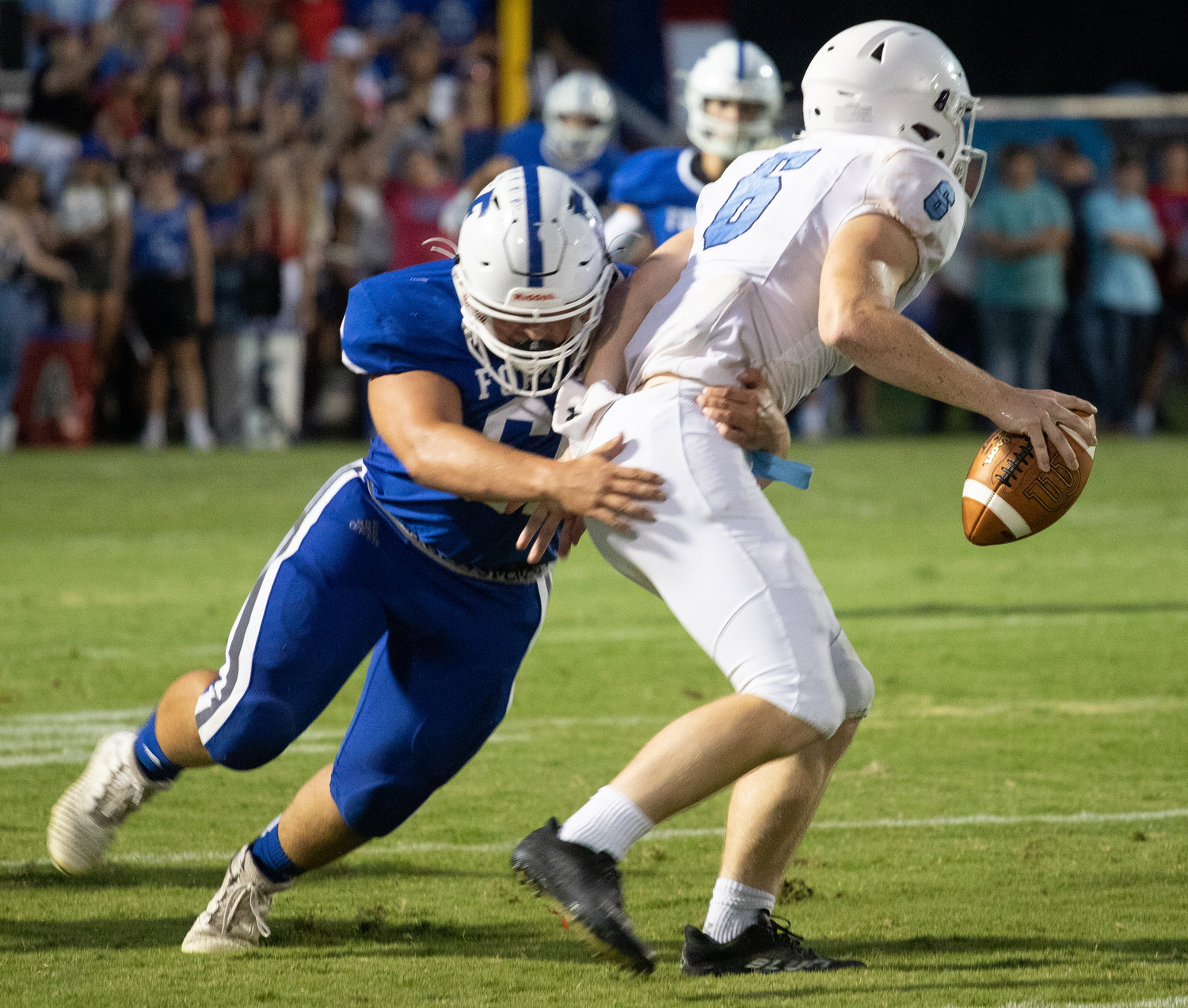 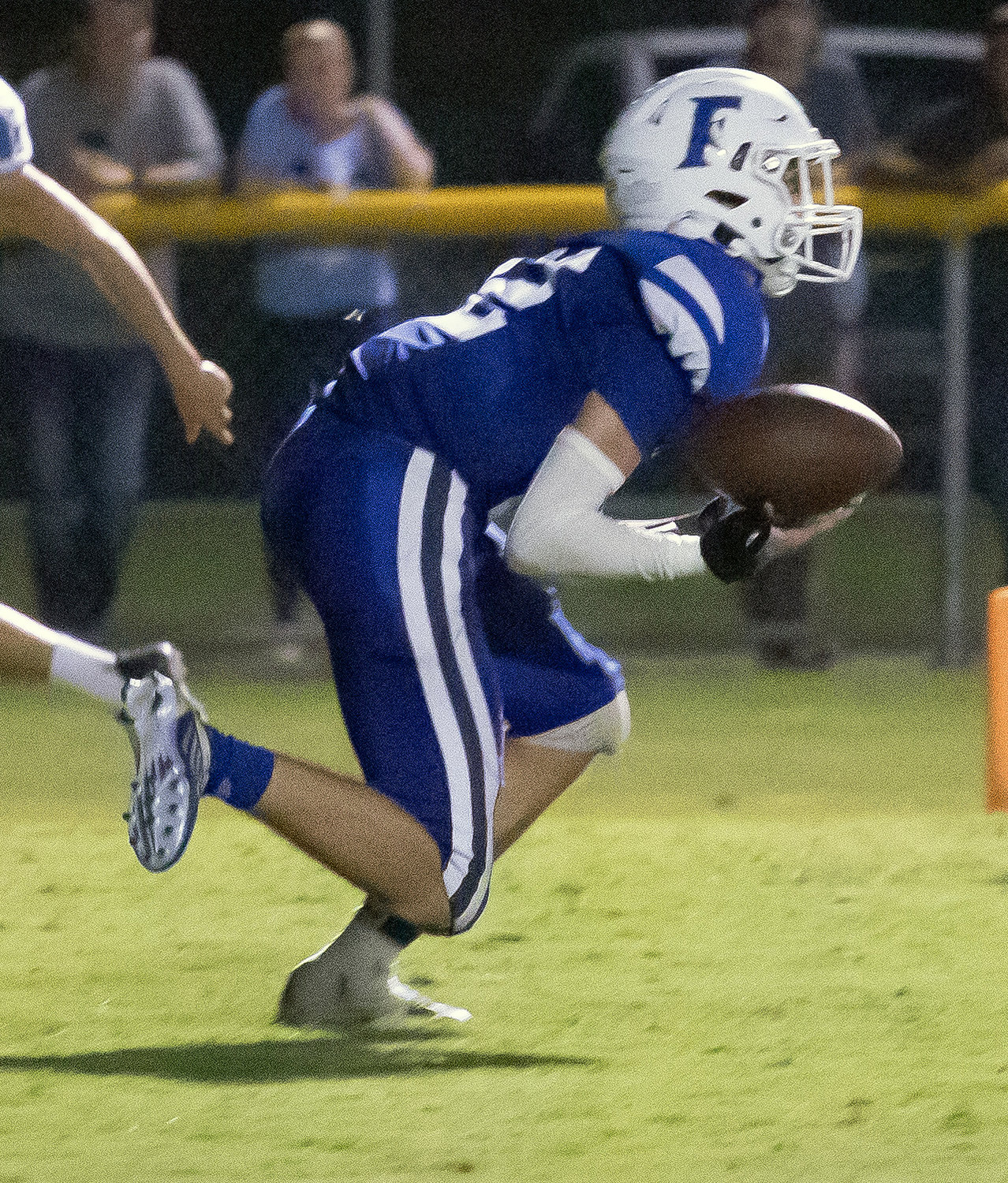 Eli Bell hauls in the 21-yard touchdown catch for the Rockets,
Tribune Photo by Kacy Kincaid 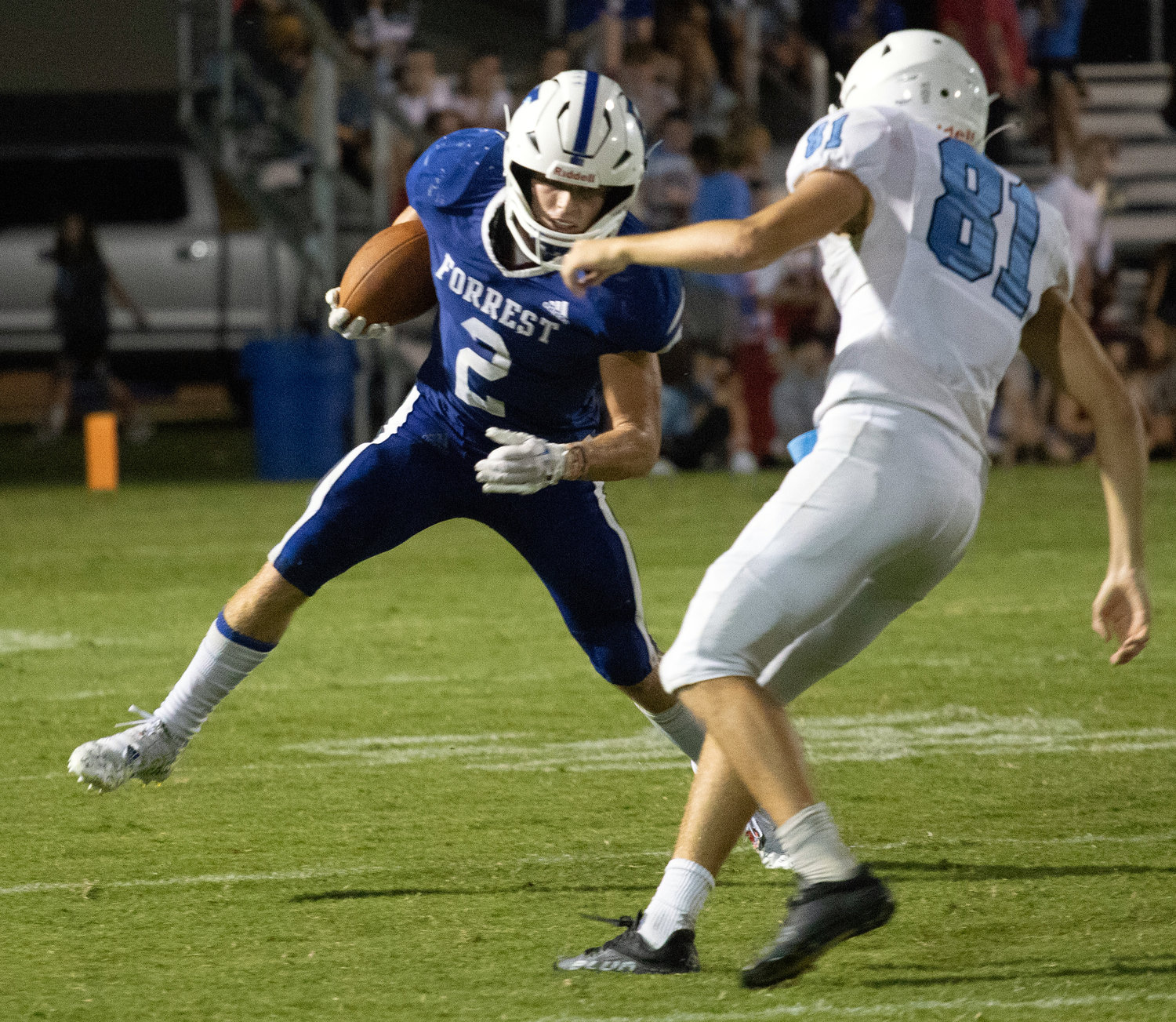 Tayton Swift carries the ball for the Rockets in the second half.
Tribune Photo by Kacy Kincaid
Previous Next
Posted Monday, September 12, 2022 9:57 am
By Kacy Kincaid ~ Sports Writer

Raiders spoil Rockets’ homecoming
By Kacy Kincaid
Sports Writer
CHAPEL HILL — The spirited atmosphere was just right on homecoming night at The Rock Friday, where the Forrest Rockets (2-2, 0-1) hosted the Moore County Raiders (4-0, 1-0), but the Rockets couldn’t pull off the non-conference win, suffering their second loss in as many weeks, 46-21.
Quarterback Dawson White and the undefeated Raiders deemed themselves too much to handle for the Rockets, who were on a roller coaster of valuable drives mixed with turnovers and flawed defense.
Despite turning the ball over on their first two possessions, Forrest freshman Eli Bell, who led the Rockets with 116 yards on the evening, found 77 of those yards in a long sprint to the end zone for the first touchdown of the game with 3:58 to go in the first quarter.
Gavin Grissom added the extra point, giving the Rockets a 7-0 lead.
“Eli Bell is playing well right now.  Bell trusts the blocking up front and has great vision,”Rocket coach Eli Stephenson said.
It took one minute and three plays for White to move the ball up the field for the Raiders, covering 54 yards in two passes to Alex Copeland, and ending the possession with a three-yard quarterback keeper, evening the score at 7-7 after Blake Bradford’s extra point.
The Rockets coughed up the ball on the next possession, Moore County recovering the fumble and taking advantage.
White teamed up with Logan Hegwood on two drives to gain 48 yards, putting the Raiders in position for White to connect with Keller Morey on a 13-yard touchdown pass.
And the turnovers kept coming for the Rockets.
This time in the form of an interception, lending a hand to White and the Raiders on their next touchdown that came with 8:51 left in the second quarter.
The next possession didn't pan out much better. Forrest is forced to punt, and Moore County lands on the Rockets 19 yard line. White strikes again on the next play with an 81-yard jaunt, giving the Raiders a firm lead at 27-7.
But Forrest found their footing toward the end of the quarter, with multiple Rockets coming together to move the ball upfield after a gainful kickoff return by senior Chris Davis.
With 1:24 remaining in the half, Ryan Hill completed a 21-yard pass to Bell, keeping the Rockets in the game at 27-14 after the successful kick.
It wasn’t just the Forrest offense that came alive to round out the half.
Ayden Hinrichs made a crucial stop, and Luke Swihart applied the pressure moments later to force an incomplete pass, thwarting any Moore County plans.
At the half, the Raiders held the lead at 27-14.
The Raiders’ momentum continued into the second half, starting off with a 95-yard kickoff return by Hegwood, and another White touchdown with 1:48 to go.
Bell carried for a gain of eight to finish off the third quarter and came back in the fourth to carry for another 11 yards to land the Rockets in their own territory.
A flag was thrown on a pass from Hill to Carson Yates, charging the Raiders with the late hit. Tayton Swift pounced on the opportunistic penalty, scoring on a 10-yard touchdown run. But it was too little too for the Rockets.
White still wasn’t finished, answering with a 46-yard touchdown run, his fifth flight into the end zone of the night. Moore County essentially sealed the deal with 9:40 still left to play.
The Rockets will travel to Summertown Friday to take on the Eagles (1-3, 0-1) in region play.
“We can’t turn the ball over. It puts us in a bad position,” Stephenson said.
“We have to work on the Forrest Rockets this week.  We have to play as one.”
Kickoff is set for 7 p.m.
Moore Co. 14 13 13 6 — 46
Forrest 7 7 0 7 — 21