A swarm of bees created quite a buzz Friday morning. Vickie Hay, owner of Marshall County Title & Escrow, Inc., noticed a swarm of bees on the side of the building by her office.  She … 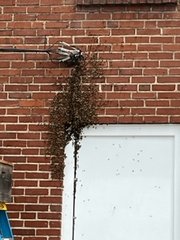 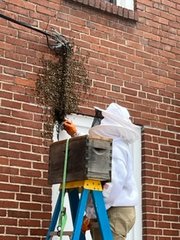 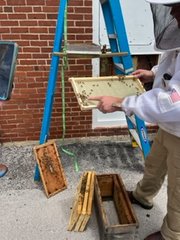 A swarm of bees created quite a buzz Friday morning. Vickie Hay, owner of Marshall County Title & Escrow, Inc., noticed a swarm of bees on the side of the building by her office.  She immediately contacted Gene Parsons, owner of the building, and informed her of the “bee” problem. Gene knew just who to call. Derrick Crump, a 12 year beekeeper, came to the rescue!

Honey bees swarm if their hive becomes too crowded. When this occurs, they split into two groups; or, there is a lack of resources or perhaps some kind of disturbance. For whatever reason, these bees were looking for a new home.

The bees were flying in and out of of a partition that’s located in the brick wall. Derrick smoked the bees out and within a few minutes, the bees balled up on the wall again. Several were flying around erratically until he sprayed them with water mixed with sugar and essential oils which calmed them. Derrick then maneuvered them into the hive, using his bee brush.

The most important bee in a swarm is the queen and Derrick had to locate her. Without the queen, the hive’s population would dwindle quickly. After looking over the bees, he finally found her. It’s a bit tedious looking at hundreds of bees that look just alike.  Several of the spectators, all women, asked  how could he tell the queen from the other bees. Derrick hesitated, then said, “The queen has a bigger rear than the other bees.” Of course, everyone  laughed at that!

Derrick was more at ease after he placed the queen in the hive. He knew the remaining bees that were in the swarm on the wall would eventually fly into the hive in a matter of hours since she was in the hive.  He came back later that night and retrieved the hive and placed it with the 40 hives that he is maintaining on his property.