CHAPEL HILL — It was a slow start in Forrest Middle’s homecoming game Thursday evening, where the Rockets took on the Cascade Champions, earning the win 48-8.Slow start aside, the Rockets … 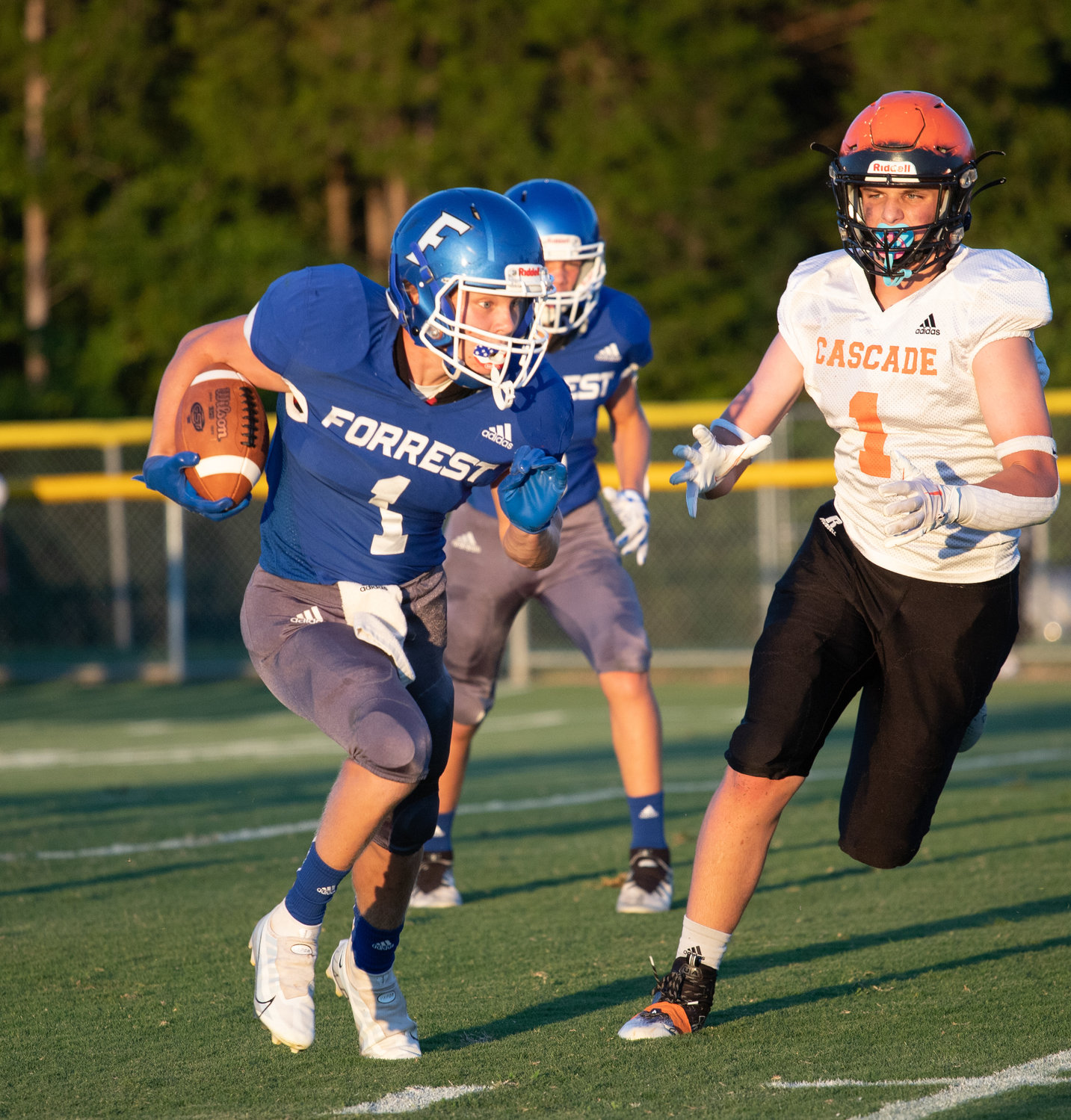 Fletcher Fields keeps his legs churning on the carry for the Rockets.
Tribune Photo by Kacy Kincaid
Posted Friday, September 9, 2022 11:38 am
By Kacy Kincaid ~ Sports Writer

CHAPEL HILL — It was a slow start in Forrest Middle’s homecoming game Thursday evening, where the Rockets took on the Cascade Champions, earning the win 48-8.
Slow start aside, the Rockets went full throttle in the last minute of the first quarter.
Jacob Tincher carried the ball for 23 yards to put Forrest in better scoring position at the 14-yard line, where Fletcher Fields took the opportunity, going to the end zone on the carry and adding the extra two to make it 8-0 at the end of the first quarter.
Cascade was forced to punt early in the second quarter, where the Rockets took over at midfield, where Fields then found another chance to score on a 50-yard run.
The troubled Champions were not short of turnovers.
With less than three minutes left in the half, Cascade turned the ball over on downs, ultimately resulting in a Fields 44-yard sprint across the goal line and Quincy Mitchell scoring on the two-point conversion, giving the Rockets a 24-point lead.
Before the Champions could make it out of the half, Mitchell picked off a Cascade pass, cruising upfield to the four-yard line.
Tincher took over with the four-yard dash across the goal line.
The Fields two-point conversion was good and the Rockets held a strong lead of 32-0 with 24 seconds left in the half.
On the first play of the following Cascade possession, Jon Hightower recovered a Champion fumble, allowing Tristan Goad to take advantage, scoring on a 46-yard carry with only seven seconds left in the half.
Quarterback Isaac Cruse made it a 40-0 game with the added two-point conversion.
Tincher scored on a 15-yard carry in the third quarter after another Forrest interception by Goad.
Finally finding the end zone in the fourth quarter after a pair of gainful runs, Cascade made it on the board.
The Rockets have a 5-0 record with only two regular season games left.
They will travel to Cannon County on Thursday.