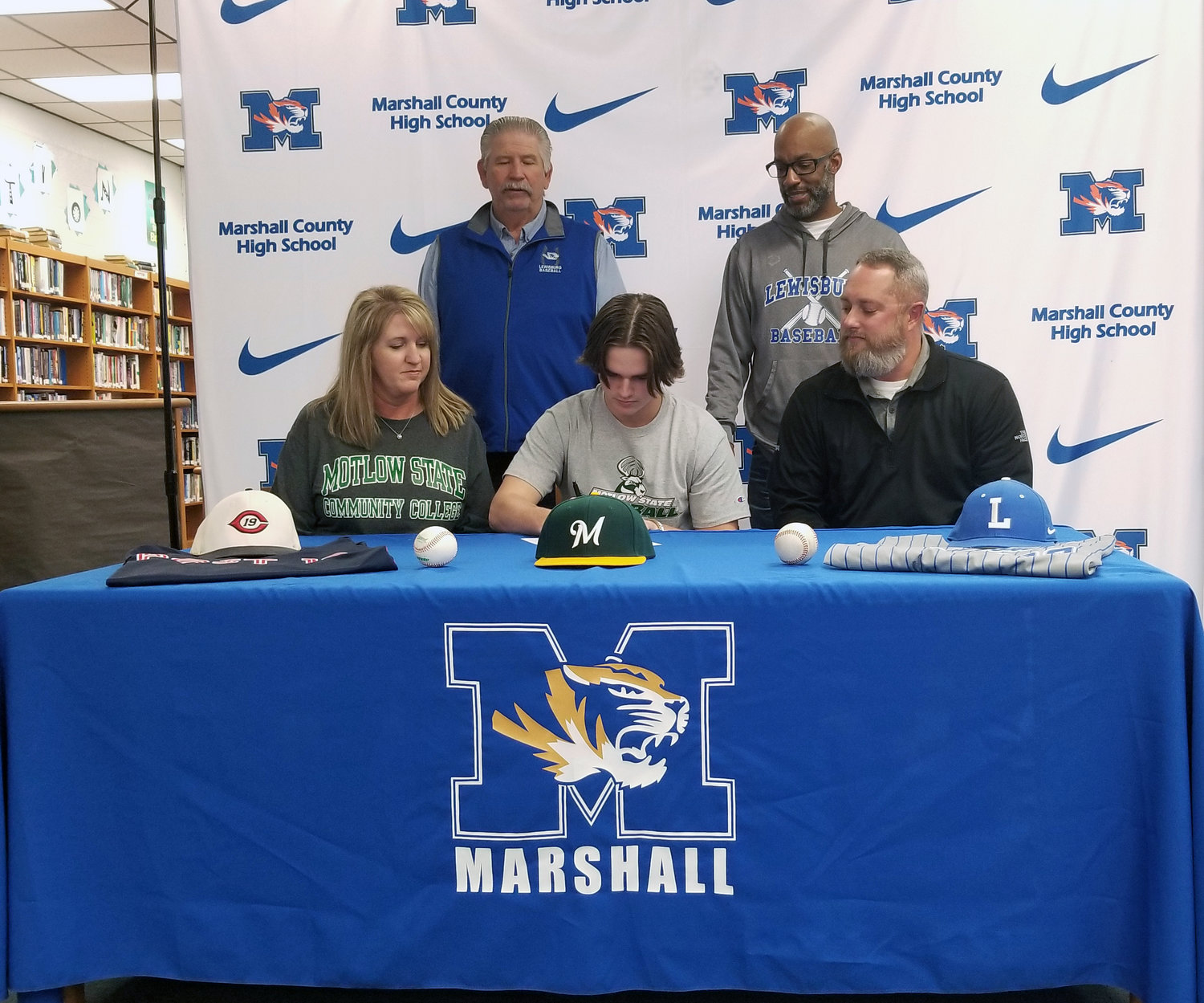 Bryson Hammons makes it official as he signs his letter of intent to continue his baseball career at Motlow Community College.
Tribune Photo by Chris Siers
Posted Thursday, December 9, 2021 1:22 pm
By Chris Siers ~ sports@t-g.com
Playing college baseball has always been a dream for Marshall County senior Bryson Hammons.
That dream became a reality last week as he signed his letter of intent to continue his baseball career after high school at Motlow Community College.
“It’s always been my life-long dream. I’ve played my whole life. It’s been my main goal to get there,” Hammons said.
Hammons has hung his hat on being the main backstop for the Tigers through three years, but also swings a good bat and has been a valuable arm in the Marshall County rotation.
Coach Mike “Monk” Reese couldn’t be more complimentary of Hammons’ efforts and has high hopes for the future of his career.
“Bryson has been a three-year starting catcher for us and basically worked into the starting position before the season was up and he’s been my catcher ever since. He’s done an outstanding job for us as the catcher. He’s also a pretty tremendous pitcher. He has good velocity and a good breaking ball. He has that mentality to be a pitcher, probably because he’s been a catcher—and being a quarterback in football. It kind of all ties in together,”Reese said.
Hammons suffered a setback this fall during football with a knee injury, but all signs indicate he’s on track for a full recovery and ready to make the most of his senior season with the Tigers.
“Right now, the doctors are saying he’s right on task. We open up in February, in terms of practice. Our first ball game is in March and the district tournament is in May,” Reese said.
“In the short term, I’m hoping he can get ready as soon as he can, as long as he’s 100 percent. When the doctor releases him and he goes through workouts and I see he was that guy before the injury.”
When it came to deciding on a school, Hammons said the ability to play at the next level, coupled with the campus being close to home made it an easy decision.
“I had a very good idea that Motlow was where I wanted to go. When they offered me, I went and took a visit. I liked everything about it. It’s close enough to home, too,” he said.
Hammons figures to be an early impact for the Bucks, whether it’s behind the plate or finding a spot among the pitching staff—and Reese says Hammons can deliver at the next level of competition.
“Competition wise, he has the velocity. If they choose to use him as a pitcher only. In college, you’ve got to pitch 1-9. You have to work every hitter. That’s something he’ll have to experience in the fall with his coaching staff. But they may look at him and think, he’s a good athlete. He swings a good bat and is a great catcher. I think that will be something they’ll look at in the fall to see what he’s able to do for them,” Reese said.
“They told me they could see me getting some early innings pitching,” Hammons said.
While he’s been part of lots of big moments while playing for the Tigers, Hammons says the bonds and friendships he’s built while playing baseball have been among his favorite memories as an athlete.
“Pretty much all my best friends are on the baseball team. I’ve played with them and I’ve made the tightest bonds with them,” he said.
While he still has a senior season to participate in, Reese says Hammons has been invaluable to the program, both from a player perspective and a leadership perspective.
“In terms of the mental part of it, he’s done an outstanding job for us. Athletically, he’s one of the best athletes in the school, and one of the best athletes on the team. He swings a good bat for us and has a lot of athletic skills. He understands the game. It’s been a pleasure to coach him. He’s an outstanding young man,” Reese said.
Hammons plans to pursue a business degree.