In 1905, a man named Paul Harris suggested a group of professionals rotate between their offices for a weekly lunch meeting to build goodwill and better friendships. Four men gathered in the Unity …

The Lewisburg Rotary Club, founded in 1922, celebrated a century of service to the city and county in March. At a gala held at Flat Rock Farms, each of the club’s active members was named as a Paul Harris Fellow, making the Lewisburg club one of the few that hold that honor. From removing toll gates in the county to the Imagination Library, Rotary has identified projects that benefit the community for 100 years and look forward to another century of service. For more photos from the celebration, please turn to Page 8 of today’s Marshall County Tribune.
Photos courtesy of Debbie Hill 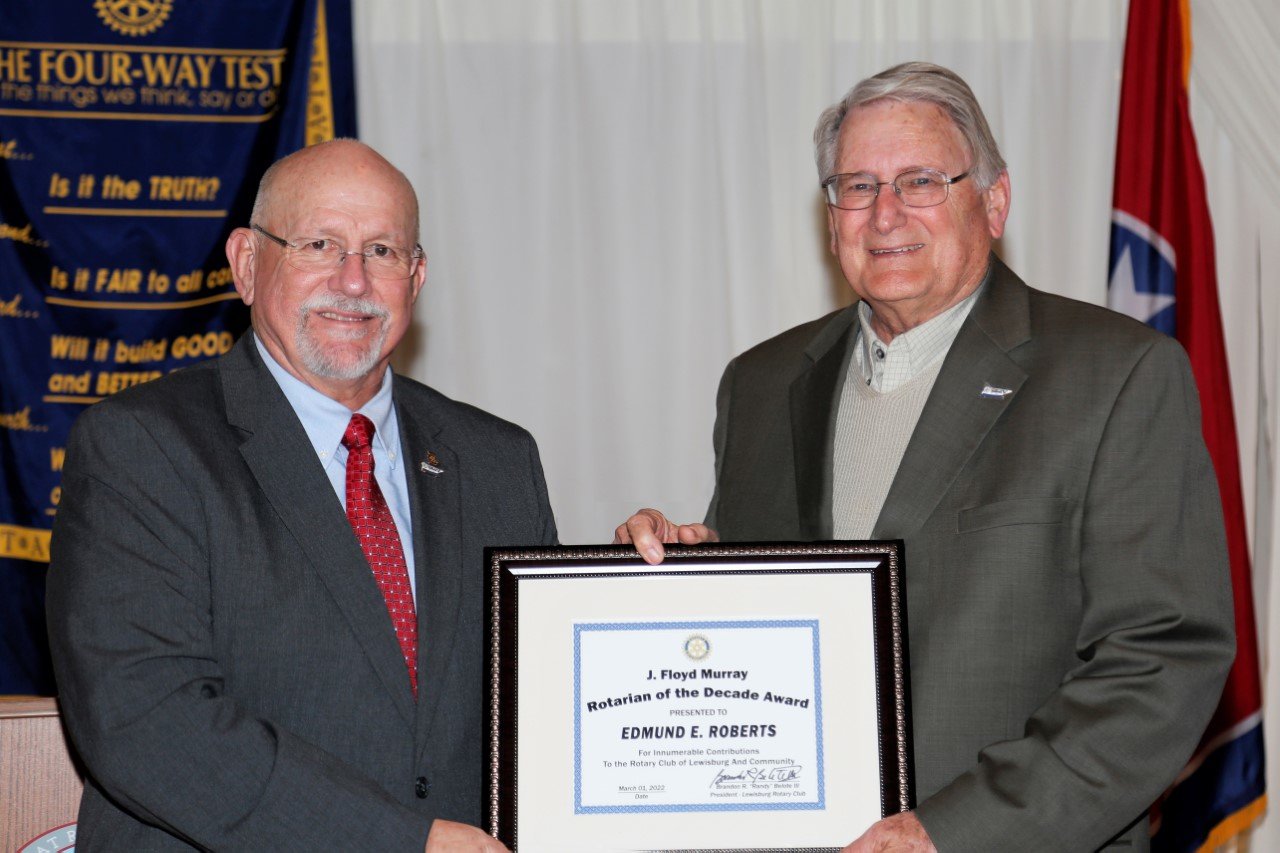 Lewisburg Rotary Club President Randy Belote presented Rotarian Edmund Roberts with the club’s inaugural J. Floyd Murrey Award, “acknowledging a Rotarian who over the preceding decade has shown exemplary service through innumerable contributions to the Rotary Club of Lewisburg.” Fittingly, Roberts and Murrey are the only two Rotarians to serve two terms as the president of the Lewisburg club in its 100 years of existence. Murrey was the founding president in 1922 and held the role for the club’s 50th anniversary in 1972.
Photos courtesy of Debbie Hill
Previous Next
Posted Thursday, March 31, 2022 1:51 pm

In 1905, a man named Paul Harris suggested a group of professionals rotate between their offices for a weekly lunch meeting to build goodwill and better friendships. Four men gathered in the Unity Building in Chicago, Illinois and Rotary International was born. Today, over 46,000 clubs operate around the globe, supporting the eradication of polio, providing clean water and promoting peace.

On March 1, 2022, current and past Rotarians celebrated the Club’s Centennial at Flat Rock Farms in Lewisburg. Club President Randy Belote welcomed over a hundred members and guests. State Representative Todd Warner offered his congratulations and announced a joint resolution from the State Legislature celebrating the Club’s accomplishments. County Mayor Mike Keny and Lewisburg Mayor Jim Bingham presented proclamations from the county and city acknowledging Rotary’s contributions to the community.

At the conclusion of the evening, President Randy Belote announced the establishment of the J. Floyd Murrey Award, acknowledging a Rotarian who over the preceding decade has shown exemplary service through innumerable contributions to the Rotary Club of Lewisburg. Edmund Roberts was presented the inaugural J. Floyd Murrey Award. Edmund served as club president in 1987 and 1996, the only Rotarian other than J. Floyd Murrey to serve more than once. Mr. Roberts has been a Rotarian since July 1, 1977. In addition to his Rotary service, Mr. Roberts served as Chair of the City of Lewisburg Community Development Board since its formation in 1998, chaired the Vision Plan for the City of Lewisburg, and served on the Joint Economic and Community Development Board (JECDB) as Vice-Chairman.

Lewisburg Rotary Club joyfully reflected on 100 years of service and fellowship. The club is now looking forward to their premier fundraising event, Rotary Run for the Roses Derby Party at Flat Rock Farms on May 7, 2022.

School Board honors Teachers of the Year