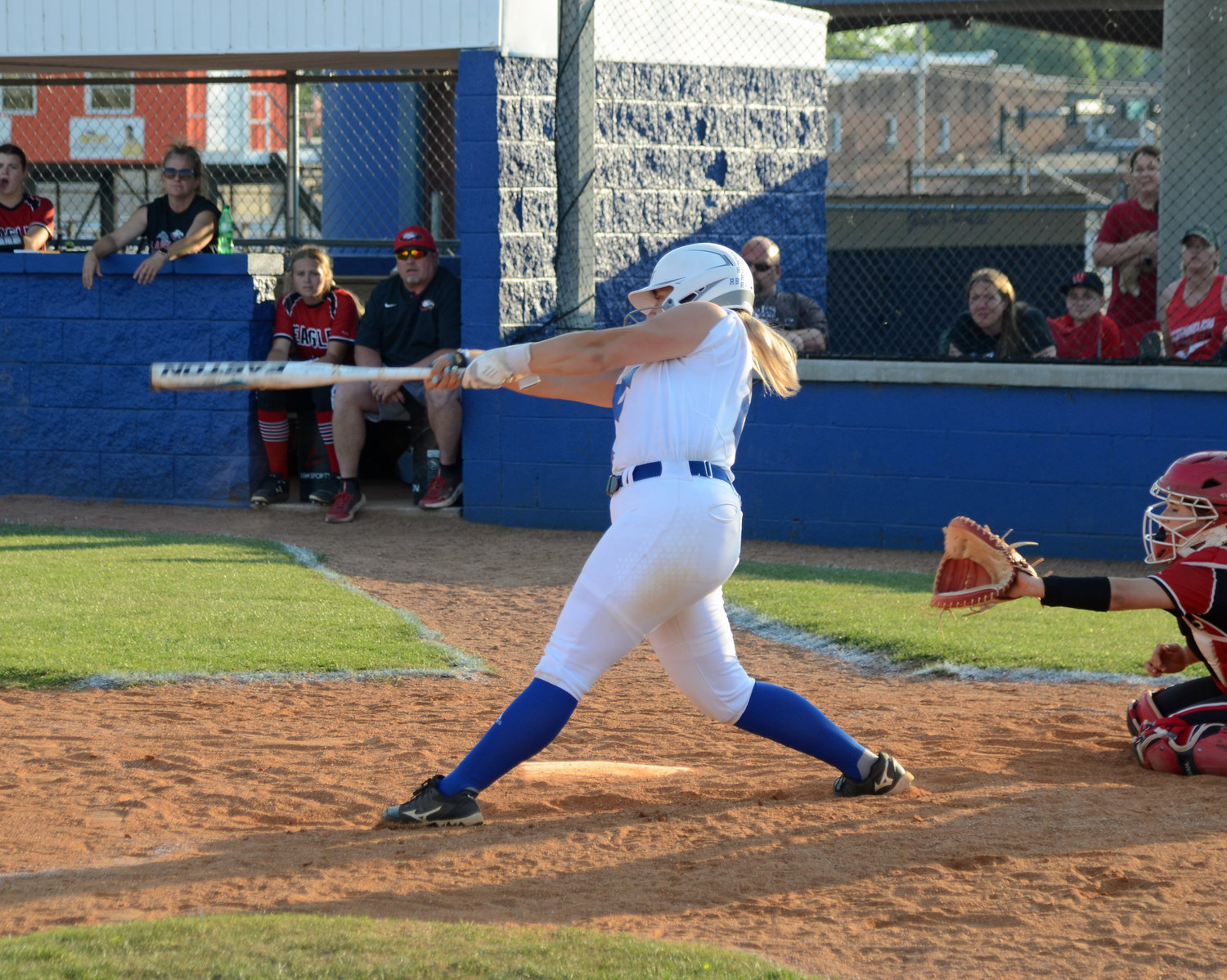 Sophomore Leslie Bartoli rips the go-ahead base hit in the bottom of the sixth inning for the Lady Rockets, who beat Westmoreland 5-2 to advance to next week’s Spring Fling XXIX in Murfreesboro.
Tribune photos by Anthony S. Puca 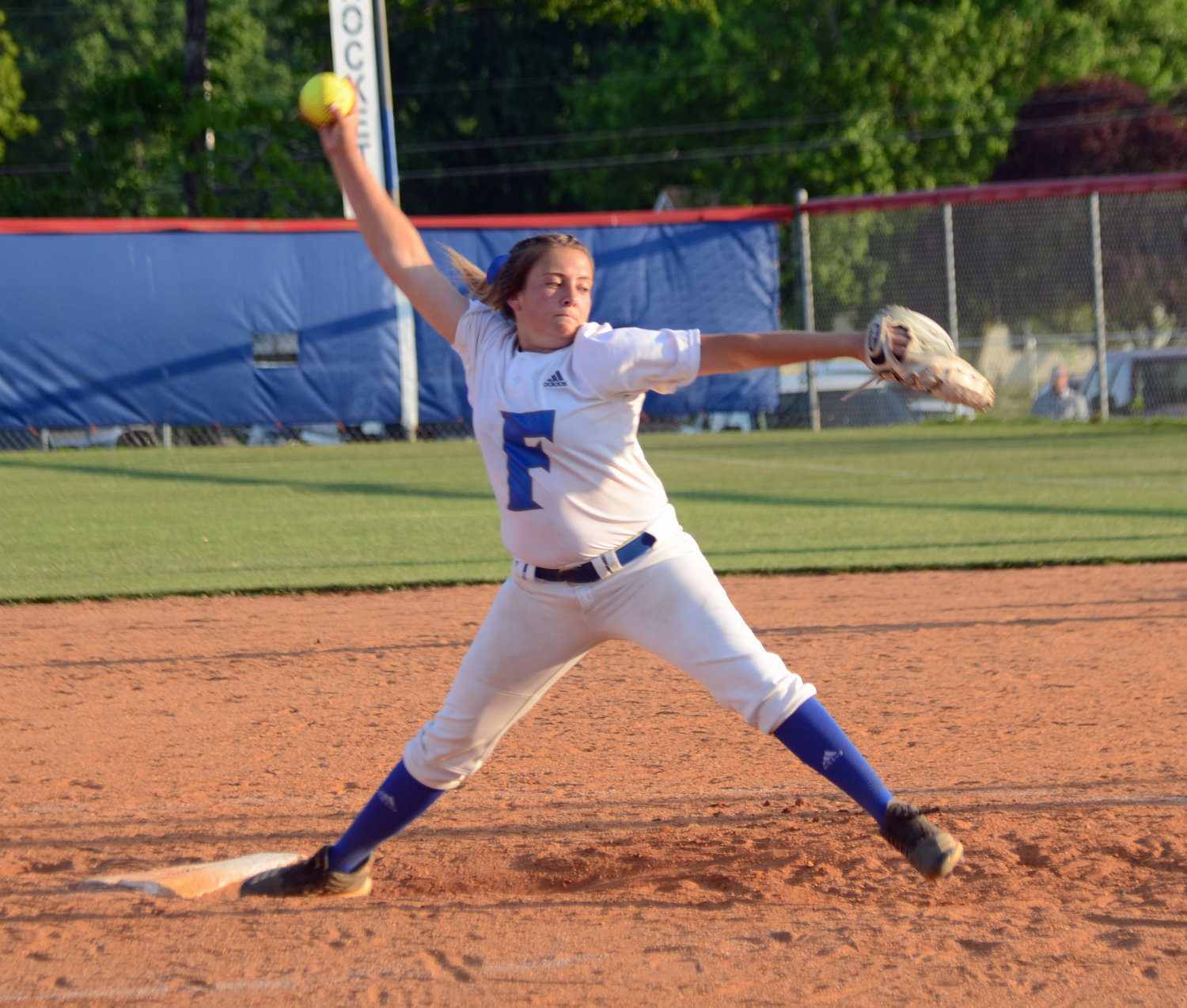 Junior Julie Williams battled the entire game and came away with the complete game win in the circle for the Lady Rockets. 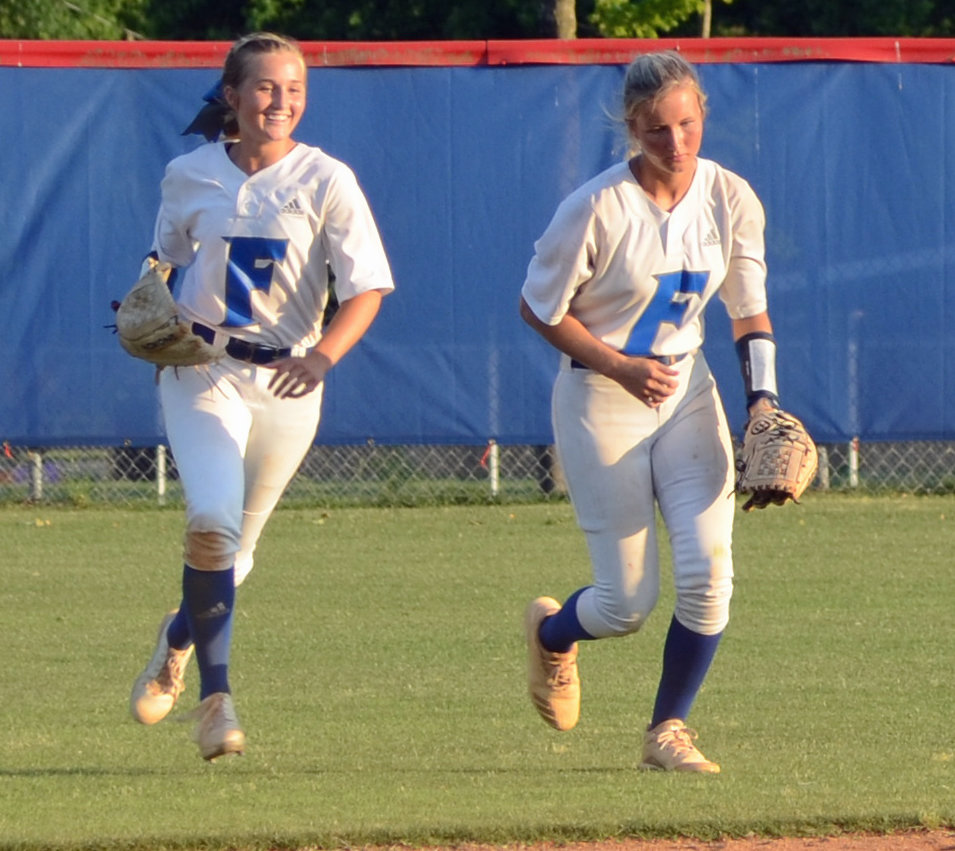 Maggie Daughrity and Briley Burnham are all smiles after Burnham made the catch for the final out in the state sectional game. 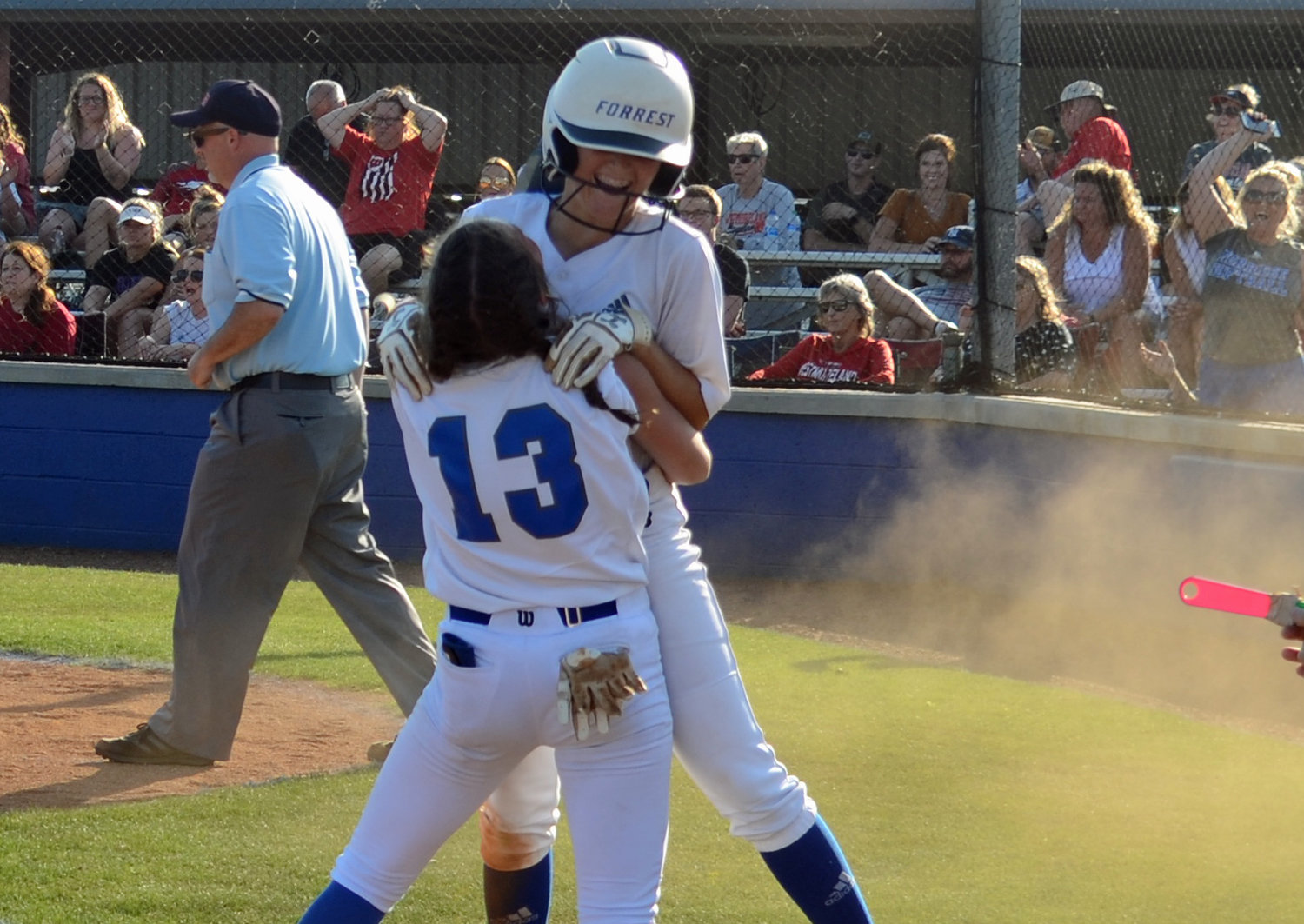 Addi Bunty lifts Maggie Daughrity off the ground after Daughrity’s inside the park homerun in the third inning. 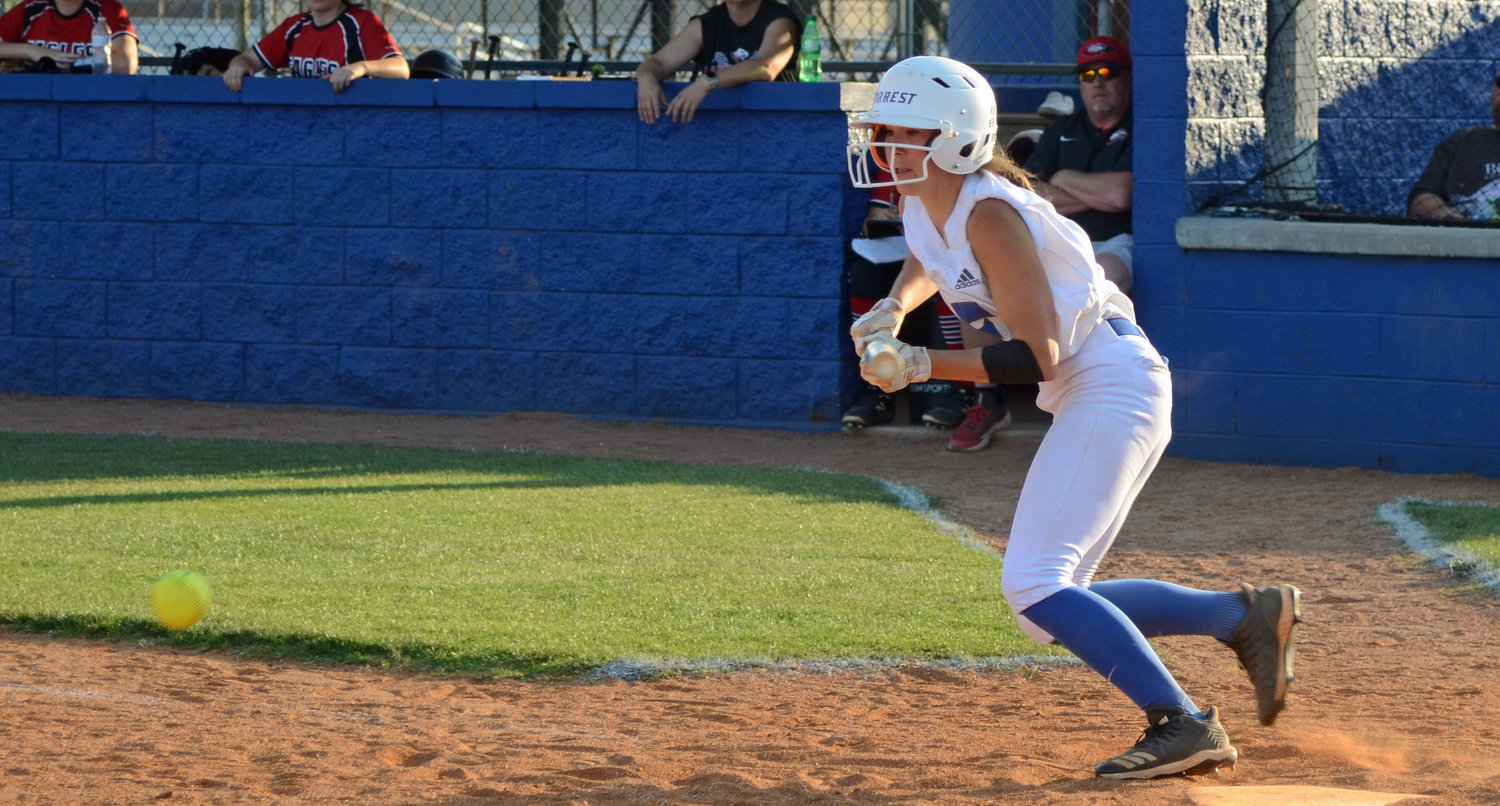 Forrest’s lone senior Addison Bunty, who gradated after the game, reaches base in the sixth on a bunt single. 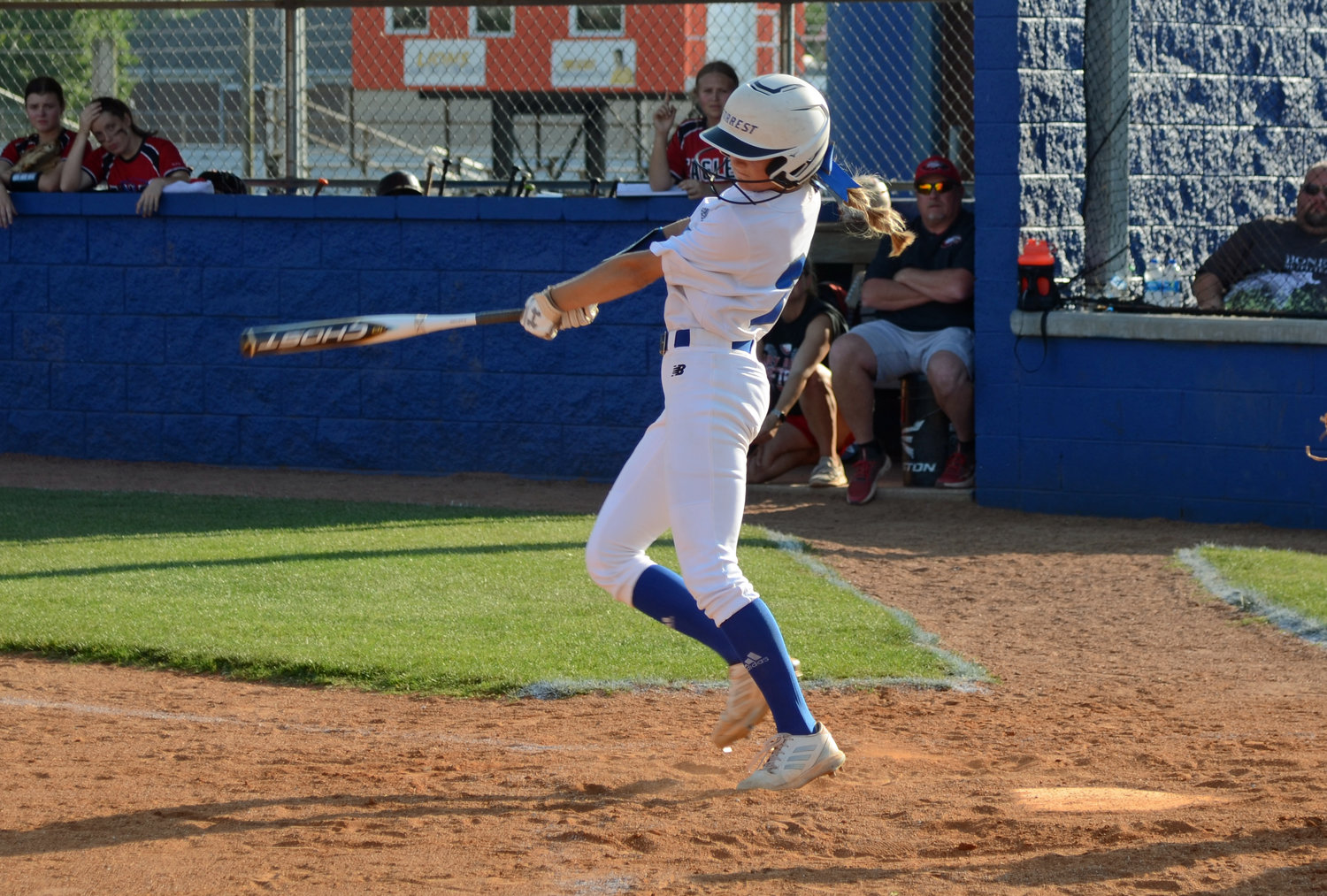 Maggie Daughrity rips an inside the park homerun in the bottom of the third inning, tying the game at 2-2. 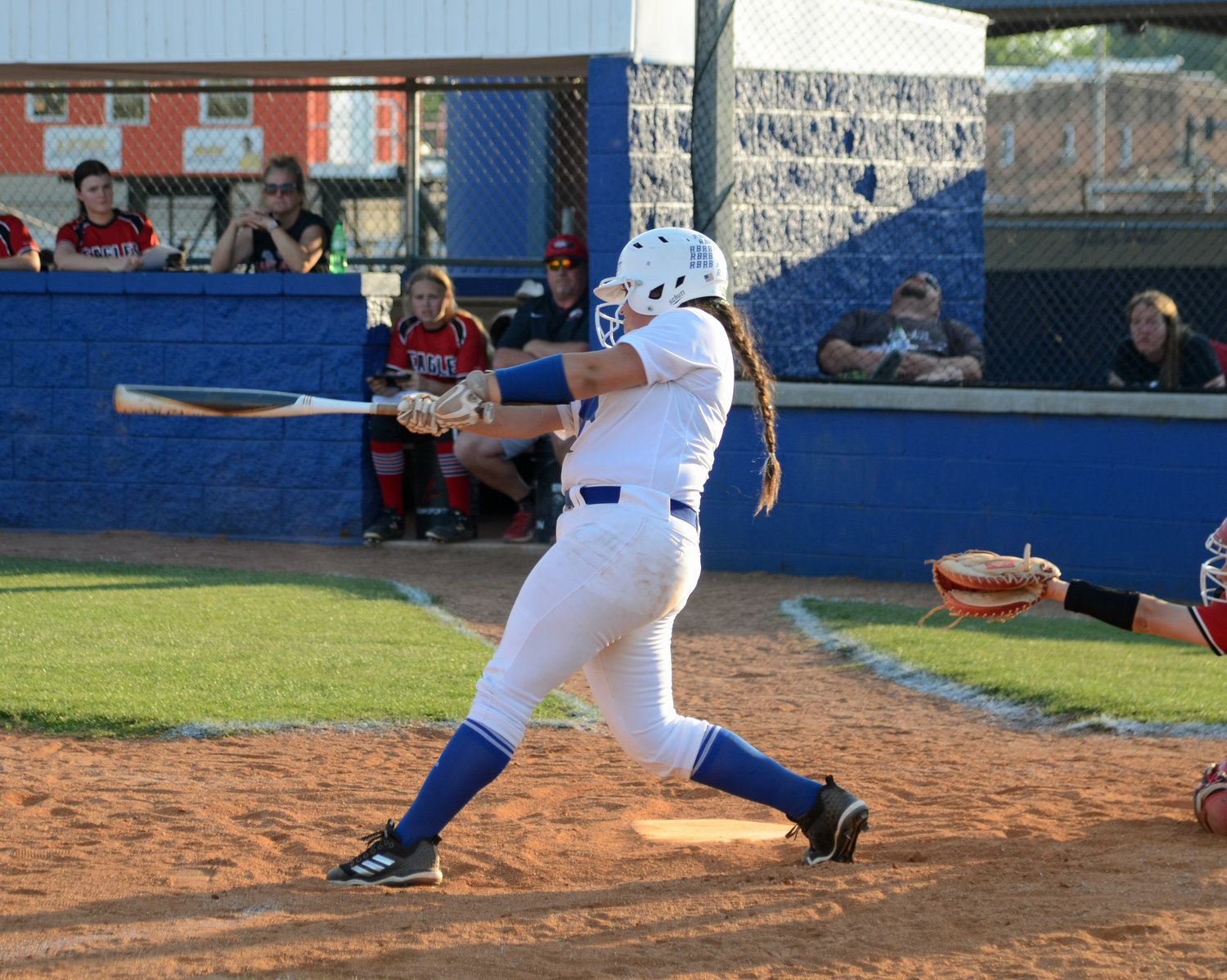 Carli Warner rips an RBI double in the sixth inning. 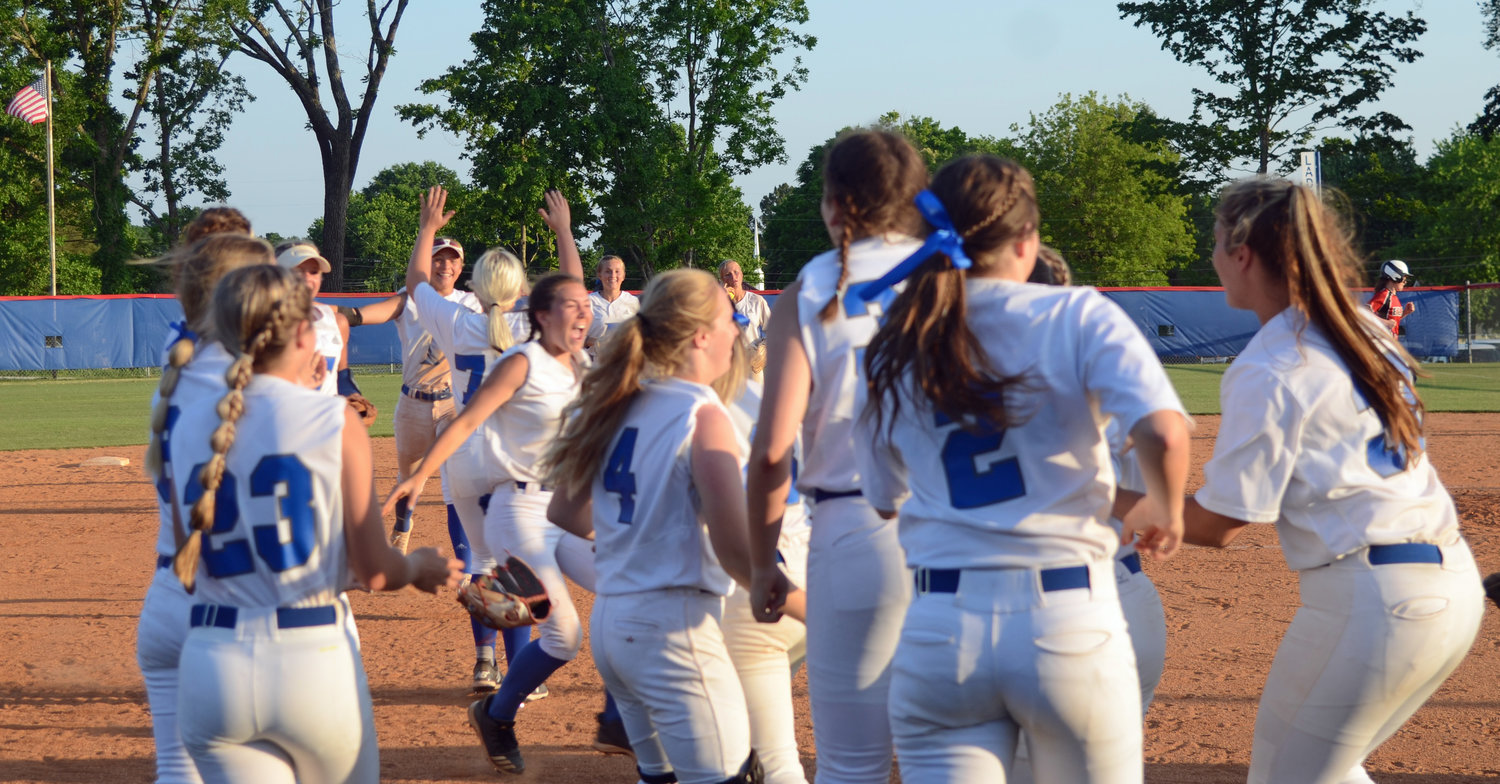 The Lady Rockets rush the field to celebrate after the final out. 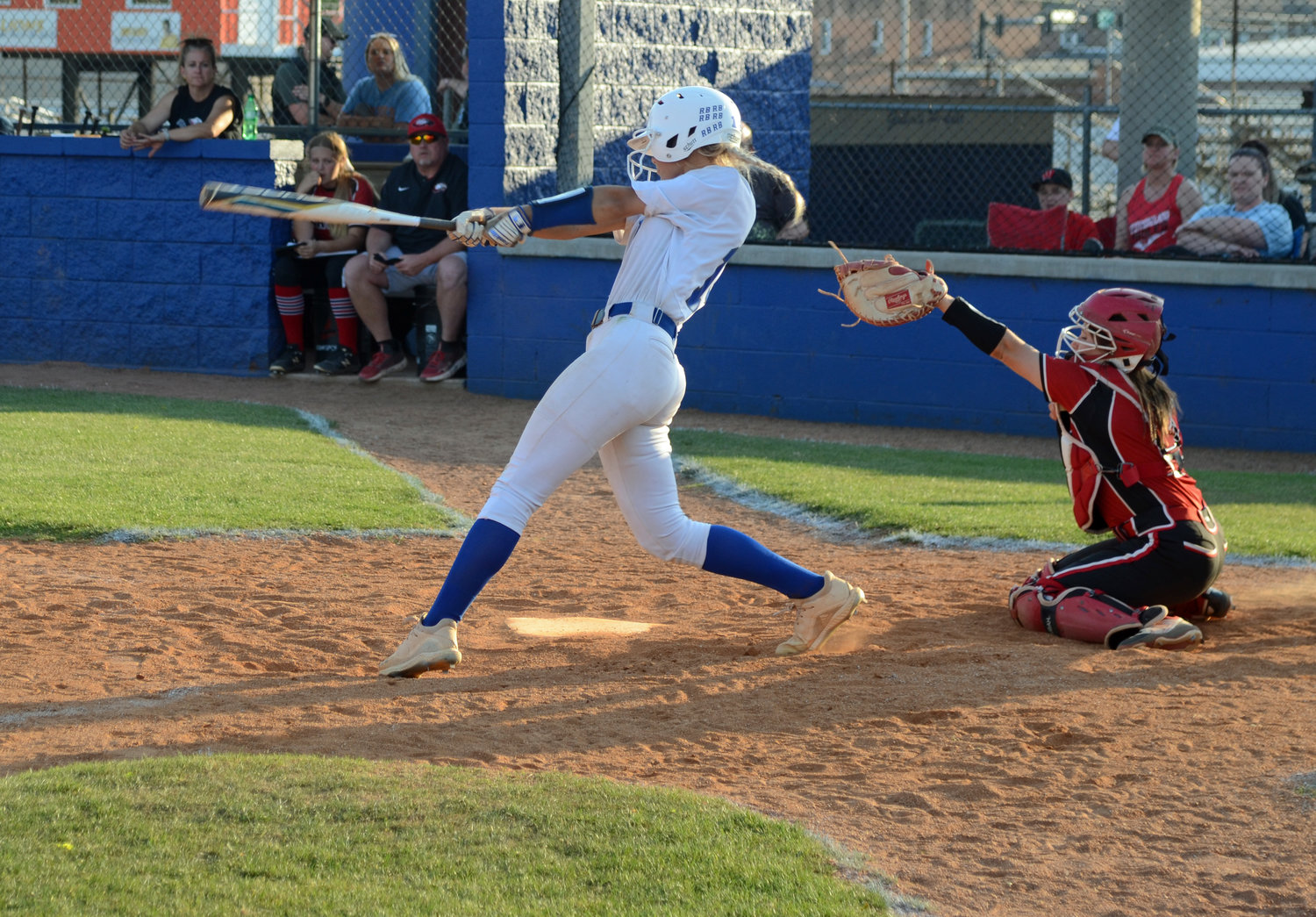 Sometimes you need some luck to go along with an outstanding effort and the Forrest Lady Rockets had both and much more Friday night at the Field of Dreams in Chapel Hill as they came away with a close 5-2 win over Westmoreland in the Class 2A sectional round.

It was a remarkable 14th win in a row in the pressure packed state sectional elimination round as Forrest heads to its 19th state tournament appearance and the four-time state champions will be going for the state title three-peat.

“It feels great with this team,” Forrest coach Shelby Lightfoot said. “We are taking it one game at a time, yes we always have that big picture goal, but we are looking for that first game and take it and go from there. These girls have a little bit of grit and they are going to get everything they worked for.”

Sophomore Leslie Bartoli’s seventh inning go ahead single paved the way for a big three-run rally that gave Forrest junior Julie Williams some much-needed breathing room as the junior finished off a gutsy complete game win in the circle.

“Julie was nervous as cat in the first inning,” Forrest coach Shelby Lightfoot said. “Once she settled in, she did great job and gave us time for our bats to come alive.”

The red-hot Bartoli went a perfect 3-for-3 at the plate for the Lady Rockets, who had eight hits in the contest.

Maggie Daughrity went 2-for-3 and once again turned in a momentum changing play when she led off the bottom of the third inning with Forrest trailing 2-1.

Daughrity scorched a line drive in to the left field corner and circled the bases for her second inside the park homerun of the postseason.

Christa Warren, Abby Ferguson, and Carli Warner all had one hit apiece with Warner driving home a run in the seventh inning.

Briley Burnham also knocked in a run on a fielder’s choice RBI that made it a 5-2 contest.

Forrest escaped a massive amount of trouble in a wild top of the first inning as the Lady Eagles loaded the bases with no outs and only came away with one run as three Westmoreland baserunners were thrown out at the plate.

A fielder’s choice on a throw from Warner at first base to catcher Parker Wales accounted for the first out.

An ensuing wild pitch sent the first Westmoreland runner safe to the plate for a 1-0 lead and on the same play a second runner tried to score and was nailed at home as Wales scrambled for a loose ball and threw to Williams covering the plate for the second out.

Inexplicably, moments later the Westmoreland runner on third base tried to steal home and was easily nailed on a throw from Warren at third to Wales at the plate.

Forrest tied the game in the home half of the first inning as Warren belted a one-out out single, went to second on a passed ball before scoring on a throwing error.

Williams escaped a two-on, no-out jam in the top of the second inning on a pair of infield popups and an inning ending strikeout.

The Lady Rockets went down in order in the bottom of the inning before Westmoreland took the lead again in the top of the third inning on a fielder’s choice RBI by Mallory Cassetty.

Daughrity’s inside the park homerun tied the game at 2-2 in the home half of the frame as both pitchers settled in for two innings of scoreless ball.

Williams seemed to get stronger as the game went on and had little trouble retiring the Lady Eagles in the top of the sixth inning.

Ferguson came up with a big one-out single in the bottom of the sixth inning and stole second base.

Bartoli stepped in and thought she had struck out, headed towards the Forrest bench, but it was only strike two and when she stepped back in the batter’s box, she delivered the go-ahead base hit to left field, making it 3-2.

“Bartoli has been hot right now, that was a big hit, she has her confidence and when she comes up she swings it well,” Lightfoot said. “And then feeding in to that momentum, Carli had all the confidence too and had that girl’s number.”

Warner followed with an RBI double in to the left field gap and Addison Bunty reached on a bunt single before Burnham made it a 5-2 contest with a ground ball.

Williams came back to the circle for the seventh inning and after a pair of pop-up outs, Kyla Urell singled to keep the game alive for Westmoreland.

Williams reached for some reserve gas and got the game ending out on a pop-up to Burnham at second base.

The first round of the Spring Fling XXIX begins on Tuesday at the McKnight and Starplex Complexes in Murfreesboro with Forrest’s opponent to be determined this weekend.