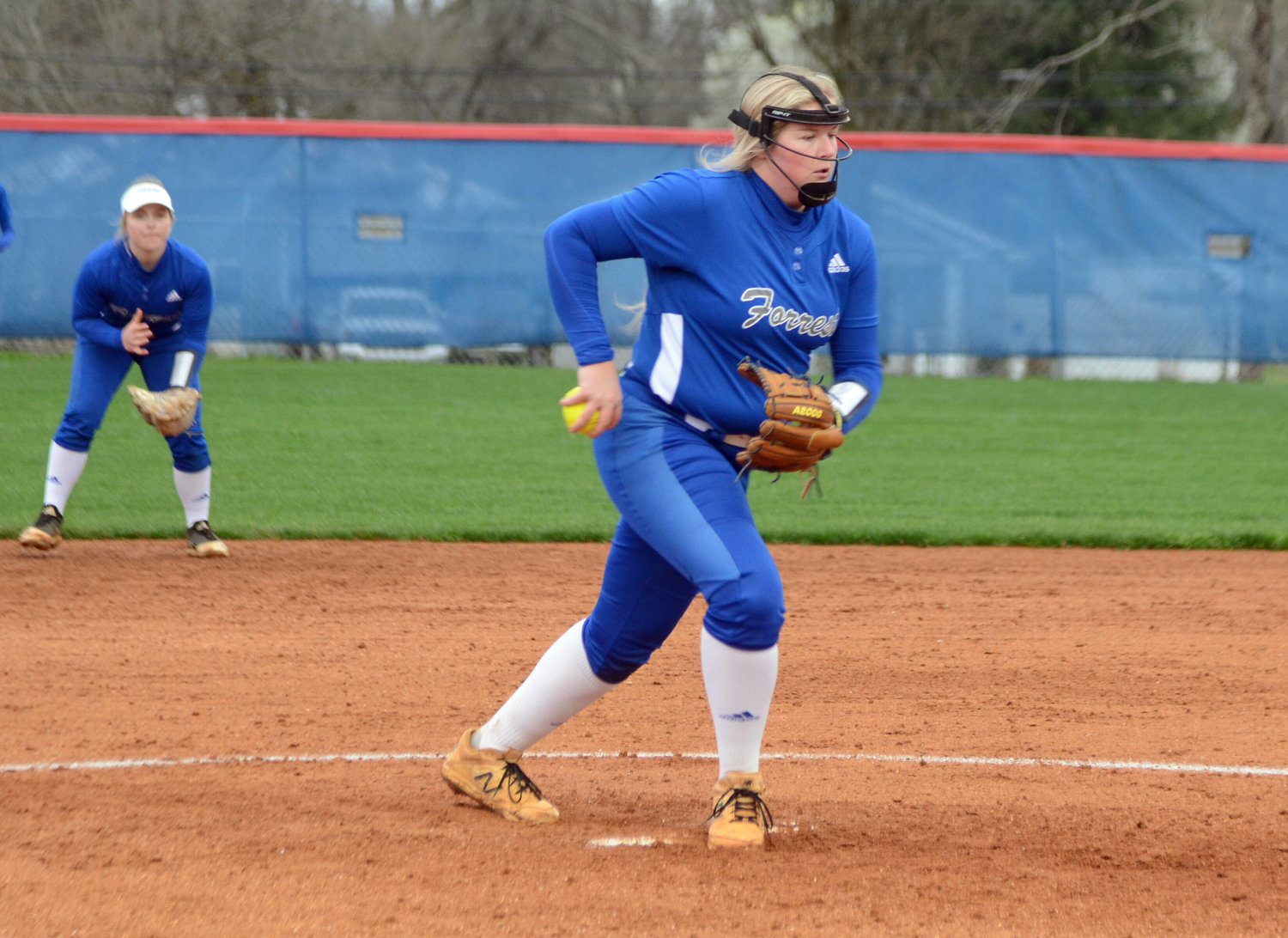 Lady Rocket senior hurler Ashley Milligan had an up and down night, but in the end she was the winning pitcher and went 2-for-2 at the plate in Forrest’s 8-7 come from behind season opening win over Oakland Thursday night at the Field of Dreams in Chapel Hill.
Tribune photos by Anthony S. Puca 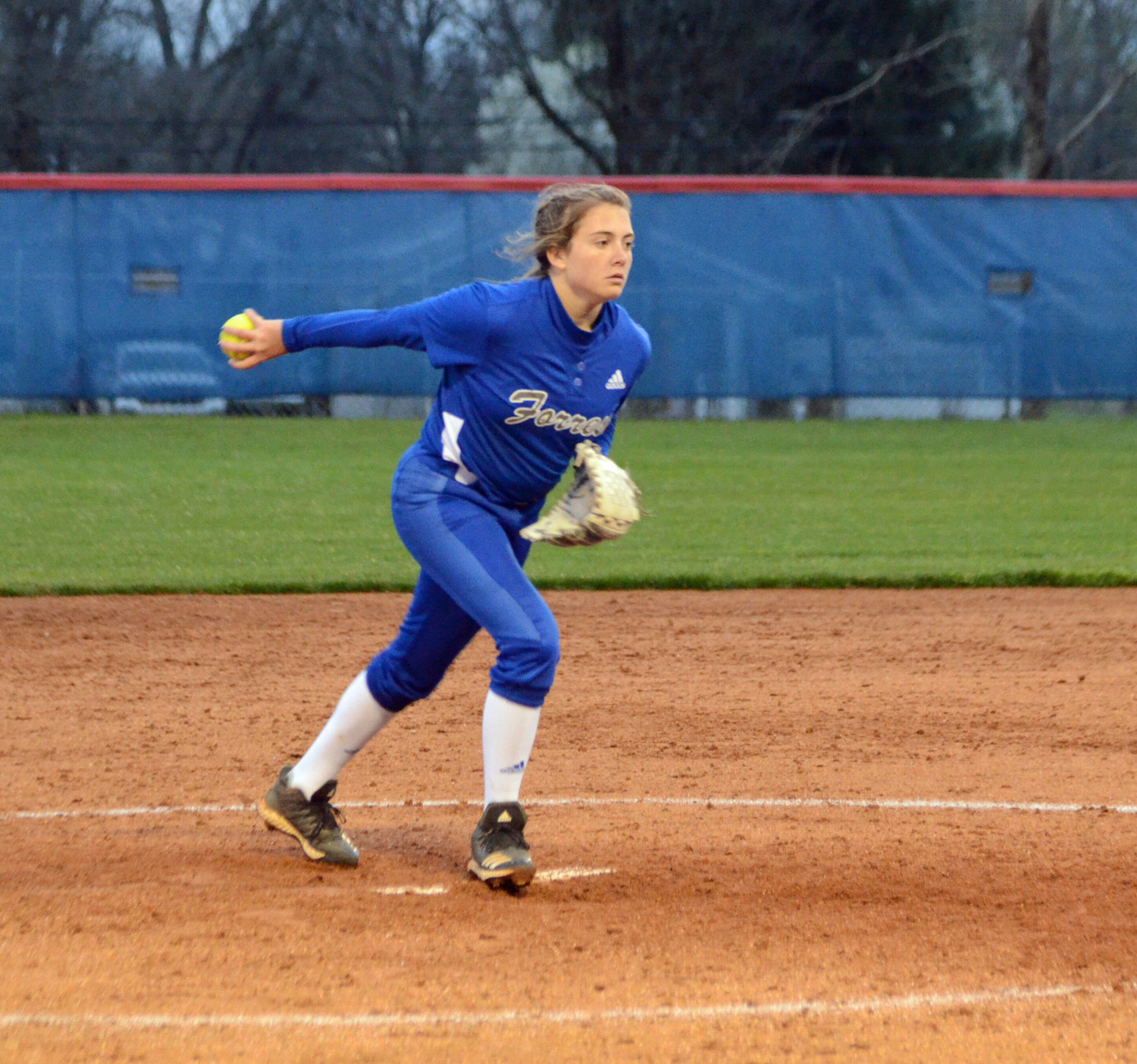 Forrest’s Julie Williams came on in relief in the circle in the second and kept the Lady Rockets in the game. 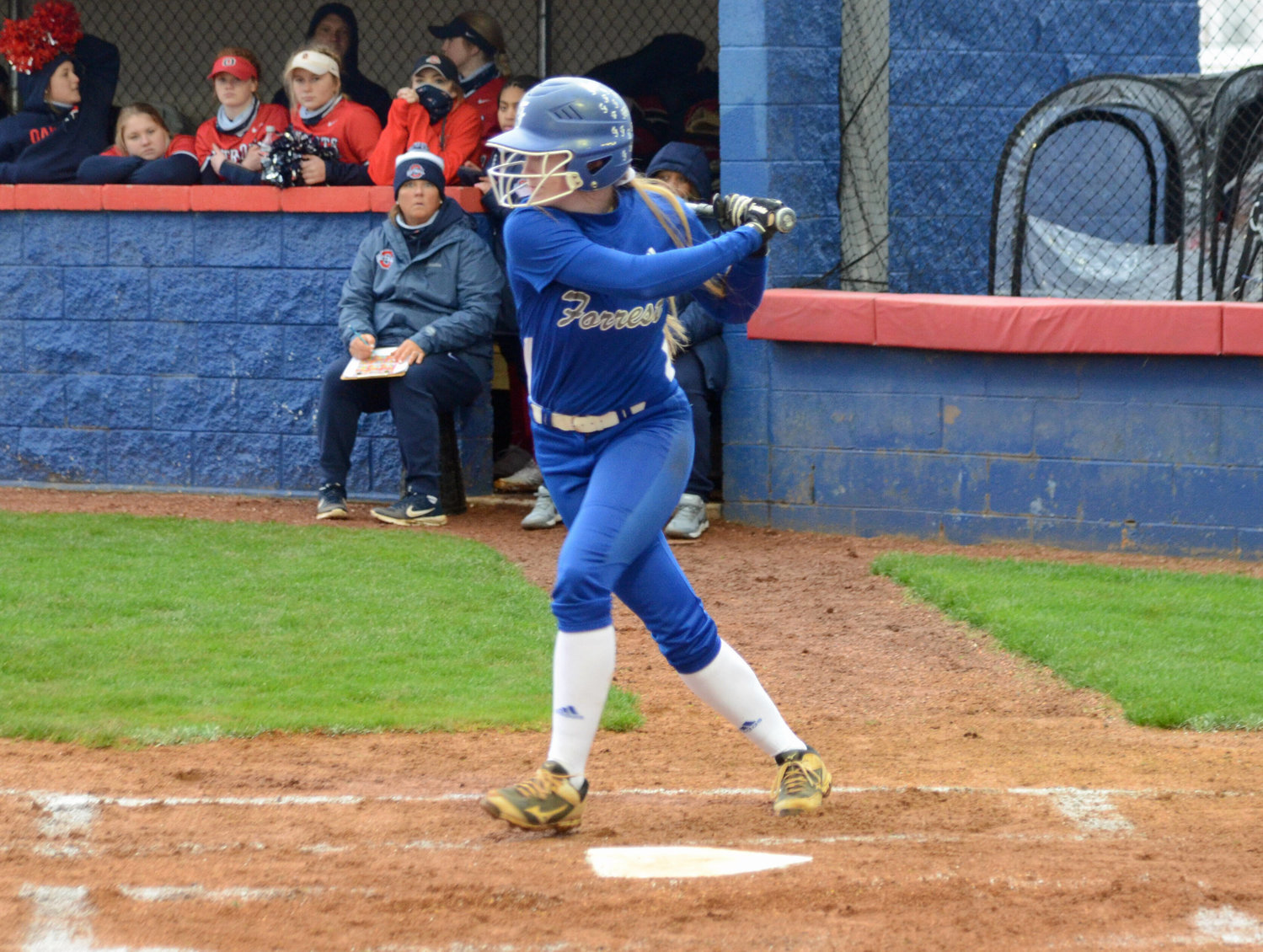 Senior Jenna Blanton went 2-for-4 with a double and two runs scored versus the Lady Patriots. 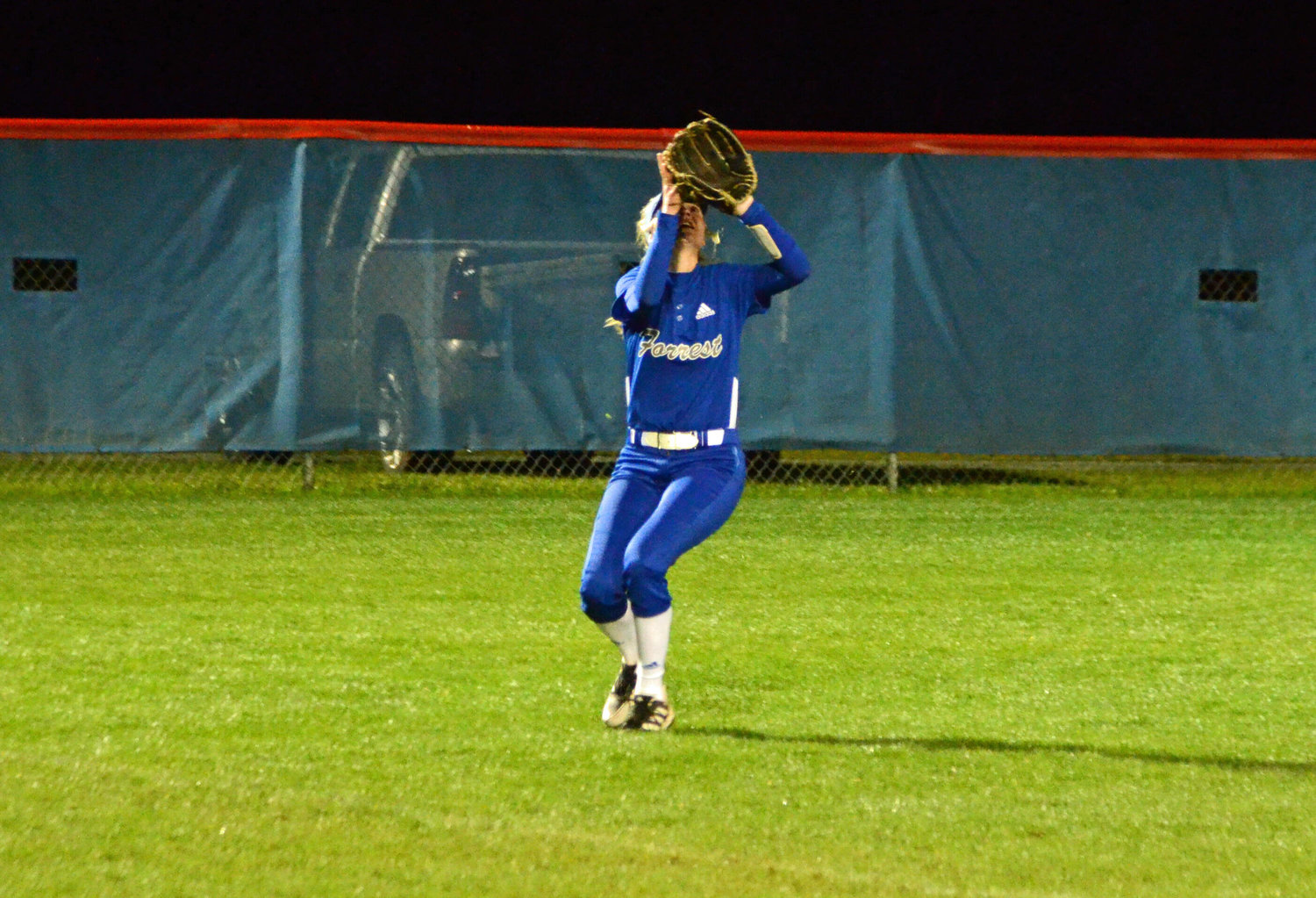 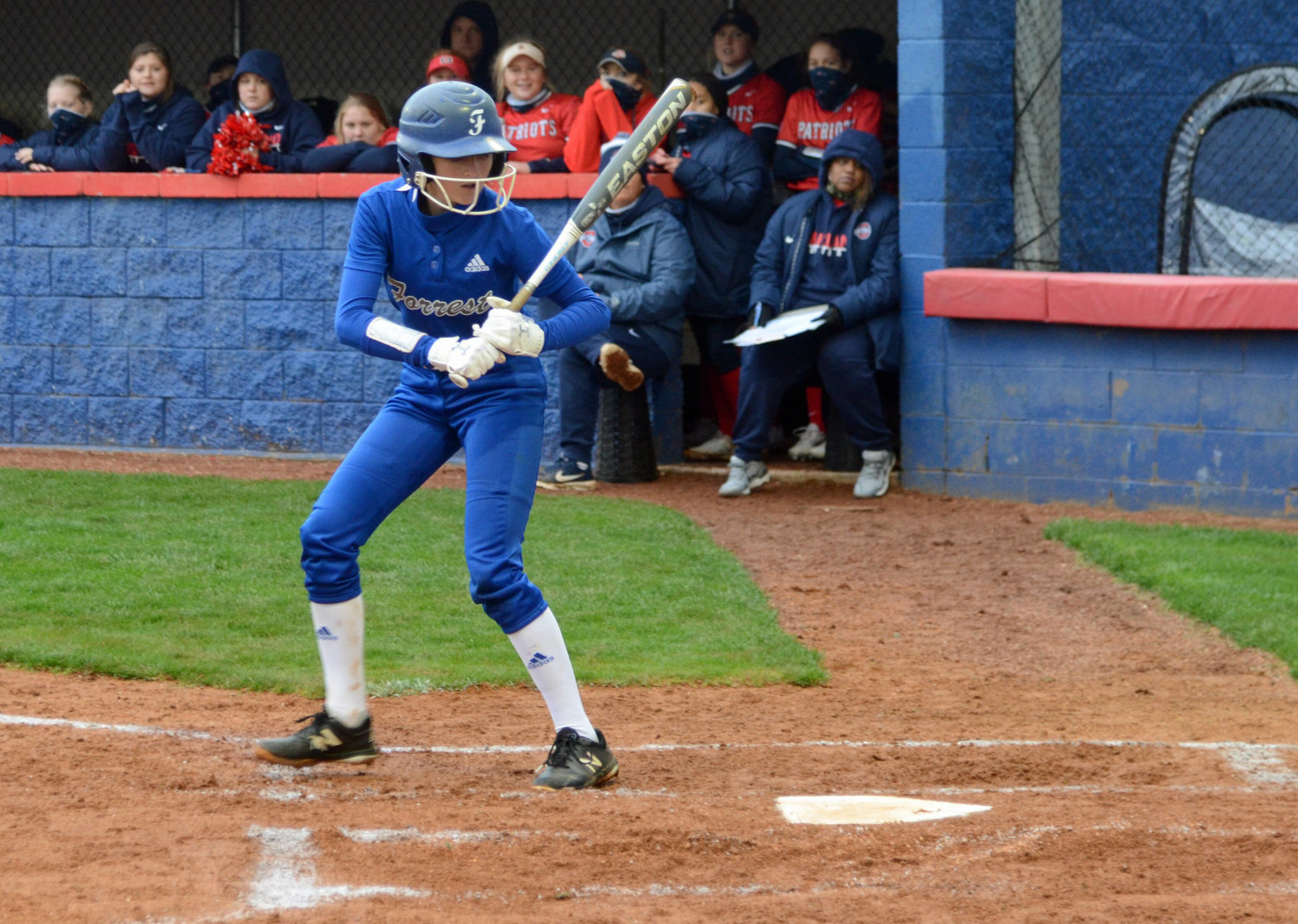 Forrest freshman Maggie Daughrity had a good eye at the plate, walking three times in the season opener Thursday night at Chapel Hill. 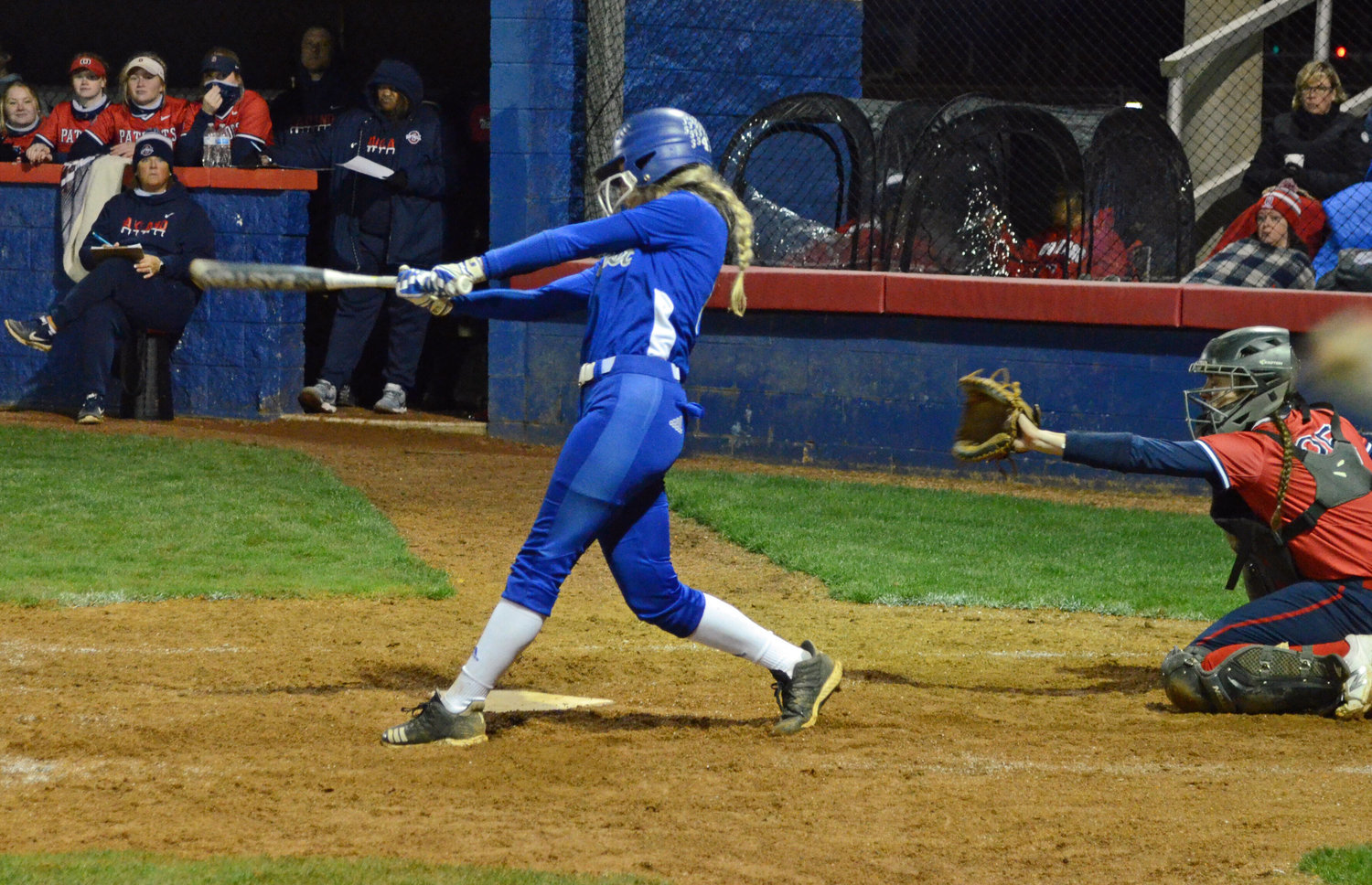 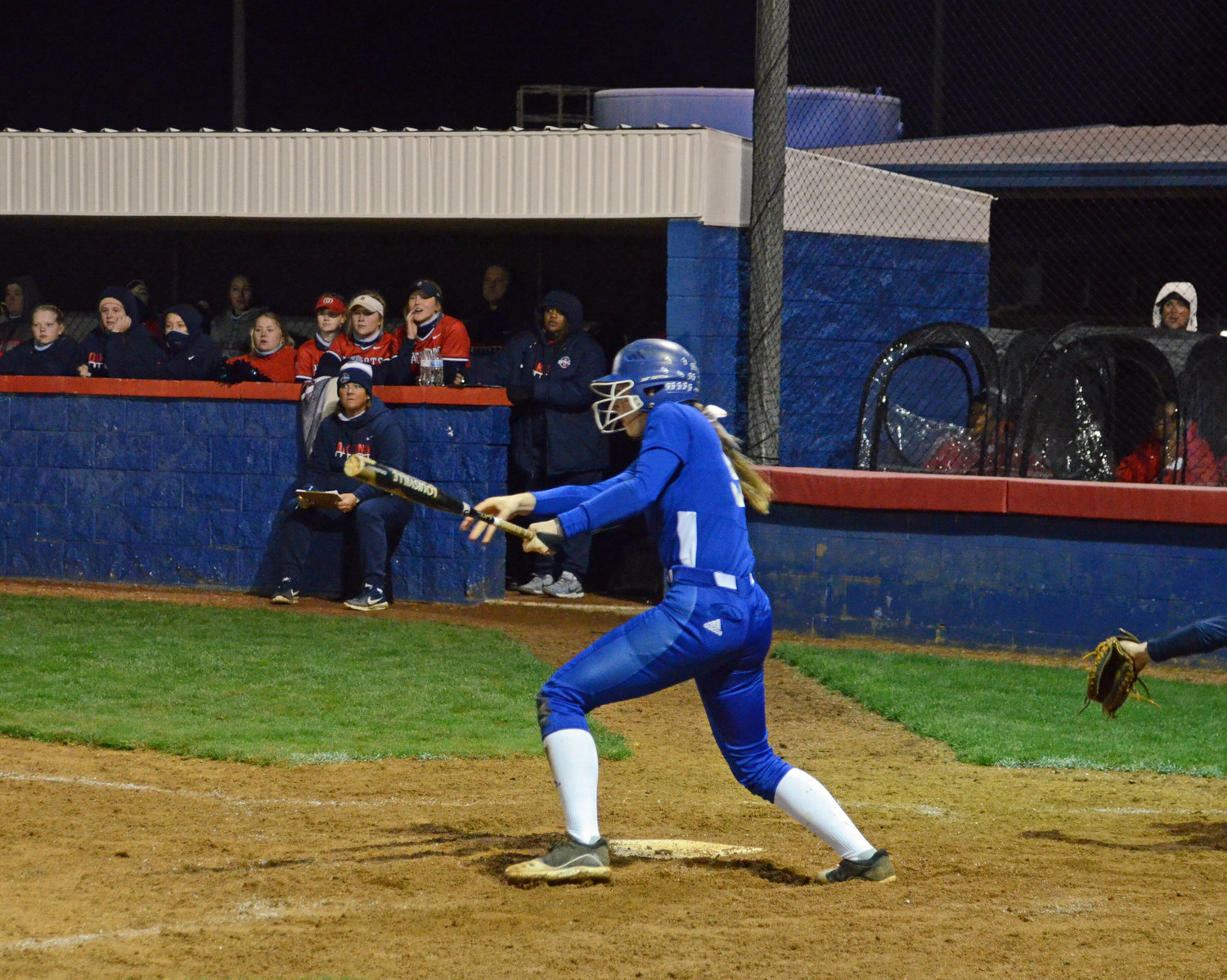 Forrest senior third baseman Karley Daughrity comes up with the game-winning shot on a groundball to shortstop that was thrown away, allowing the game winning runs to cross home plate in the bottom of the fifth inning.
Previous Next
Posted Sunday, March 21, 2021 11:00 pm
Anthony S. Puca Sports Editor

The waiting is the hardest part.

After a year on the shelf due to the Covid-19 pandemic, the defending Class 2A state champion Forrest Lady Rockets finally got to play some ball, hosting 3A Oakland in a chilly season opener at the Field of Dreams in Chapel Hill Thursday night.

“I was just as nervous as they were, you know just that excitement and anticipation,” Forrest coach Shelby Lightfoot said. “It feels good, we are a brand new team, it’s not a team that we had, it’s not a team that I have coached a lot, so trying to get to see where they are going to go and see what this team looks like is different, but we are excited.”

In a fitting start to the season, the game featured all kinds of ups and downs, but in the end, Chapel Hill pulled out an 8-7 comeback win over the Lady Patriots in a wild finish.

“We were behind a lot, LA (Laura Mealer) not being in the game is a big miss for us, she’s a big stick and that hurt a little bit,” Lightfoot said. “We got some young kids, our whole outfield is new and behind the plate is new, so shout out to our freshmen.”

“I know Fergie (Abby Ferguson) got a big hit tonight and got on base and then Briley (Burnham) came up big for us in the last inning, so that was big.”

Senior Ashley Milligan started in the circle for the Lady Rockets and ran in to control problems, walking seven Oakland batters, including four in a row in the second inning to fall behind 3-1.

Milligan was relieved by Julie Williams with two outs in the stanza and Williams went on to pitch two more innings, holding the Lady Patriots in check before Milligan returned to the circle to finish out the contest with a 1-2-3 fifth inning.

“He (home plate umpire) was really tight behind the plate, he was even tight on their pitcher, I think both of them, speaking from a pitcher’s standpoint, it got in their heads a little bit,” Lightfoot said.

“I had to pull her out to get her composure back and Julie did what we asked her to do when she came in and got us outs to find a way in between and the Ashley we saw in the last inning is that leadership we need, so even though she had a rough go, I’m proud of her for coming back and fighting.”

The Forrest offense did its part, coming back from the 3-1 second inning deficit to tie the game in the bottom of the frame with one run crossing the plate on a wild pitch, another on a base loaded base on balls to Karley Daughrity and the game tying run on a fielder’s choice RBI by Katelyn Helmick.

Oakland responded with a three more runs in the top of the third inning, including a two-run home run by Reese Calhoun.

Forrest failed to score in the bottom of the third inning and Oakland plated its final run of the game on a fielder’s choice RBI by Kaya Buckley to make it a 7-4 contest.

Oakland pitcher Rylee Veron set down Forrest 1-2-3 in the bottom of the fourth inning and Milligan returned to blank the Lady Patriots in the top of the fifth.

The Lady Rockets opened up their final at bat in the five-inning contest with a base hit by Milligan, who was replaced on the base paths by Saryna Kurtz.

After a strikeout, designated hitter Briley Burnham fired up the squad when she drilled a two-run bomb over the left/center field fence to make it a 7-6 ballgame.

“I know a little bit of what Briley can do, in practice she has really shown her power, especially off live pitching,” Lightfoot said. “In her first at bat she got jammed, in her second she just missed it, so a little bit of that confidence and digging in will make her a big designated hitter for us this year.”

Abby Ferguson was hit by a pitch and Jenna Goodman walked before Veron got a fly out for the second out.

Maggie Daughrity came up with her third base on balls of the contest to load the bases for Karley Daughrity, who drilled a hot shot to Calhoun at shortstop, who threw the ball away and Ferguson and Goodman came around to score to give Forrest the 8-7 season-opening win.

The Lady Rockets travelled to Summertown for a weekend tournament on Friday and Saturday and went 3-1-1 with a win and a loss versus the host Lady Eagles and wins over Lexington and Collinwood, plus a tie against Wayne County.

The Lady Rockets return home tomorrow night when they host the Community Viqueens (4-2-1) at 5:30 p.m. in the District 12-AA opener for both squads.