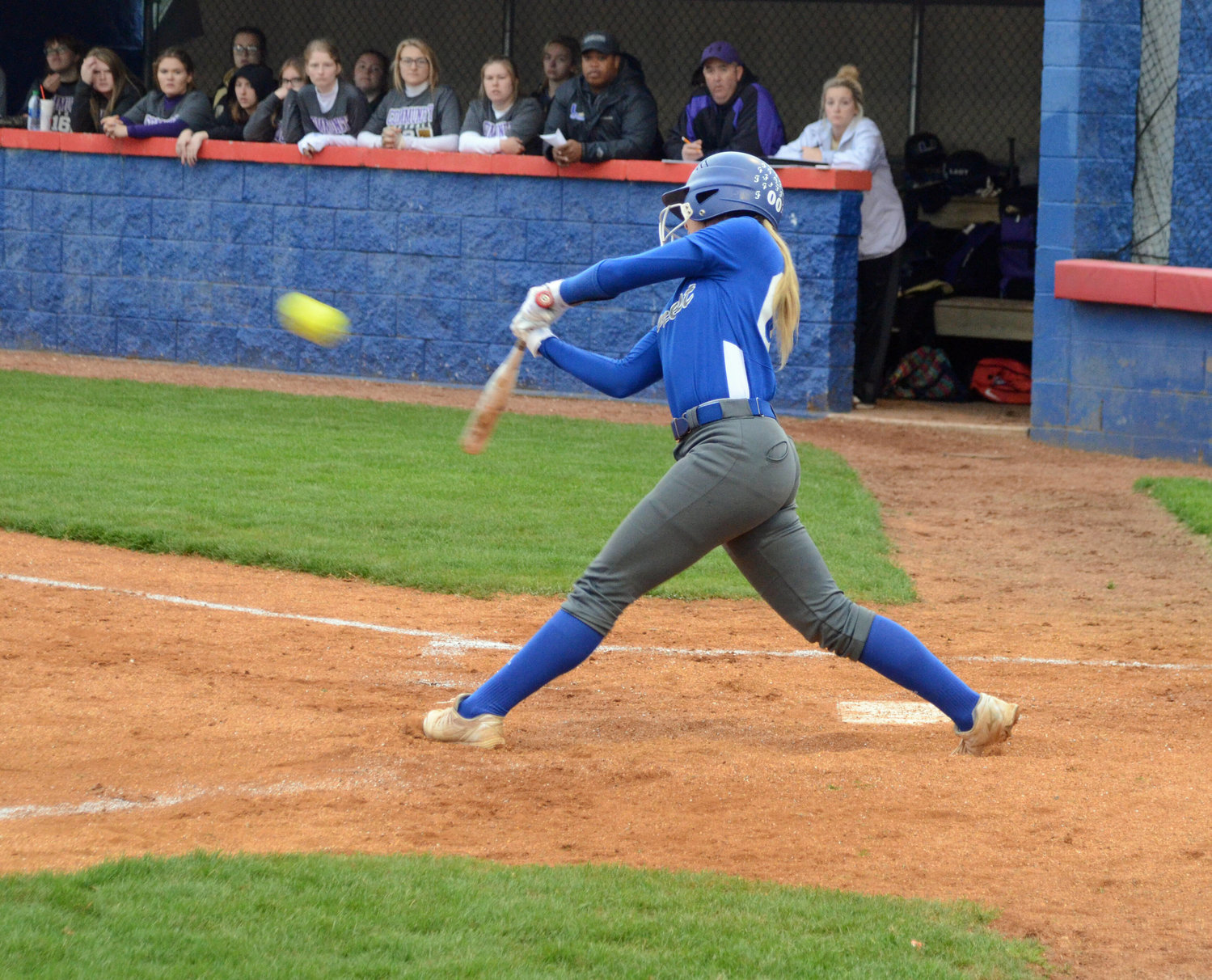 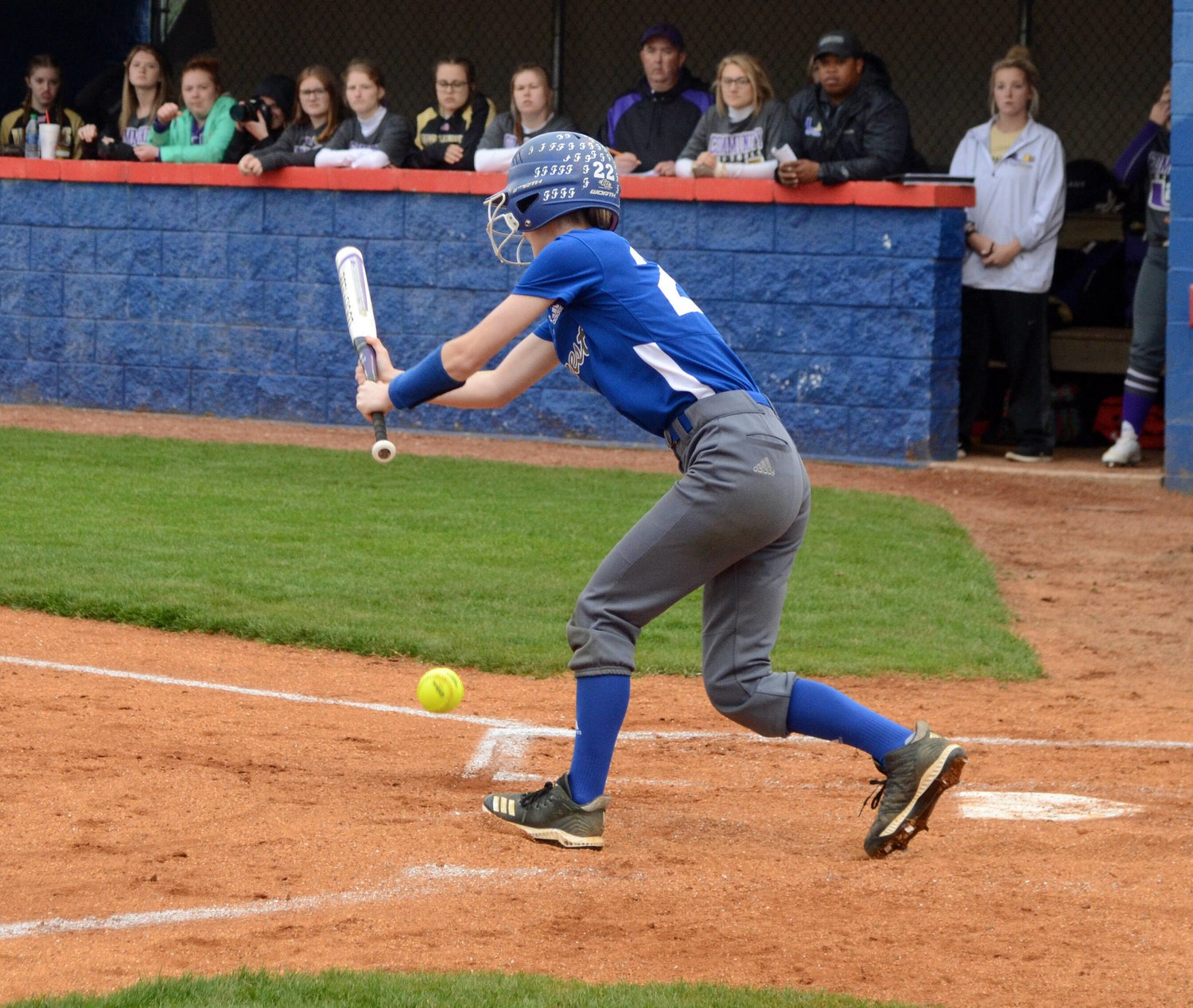 Kiersten Blalock lays down a perfect sacrifice bunt in the second inning. 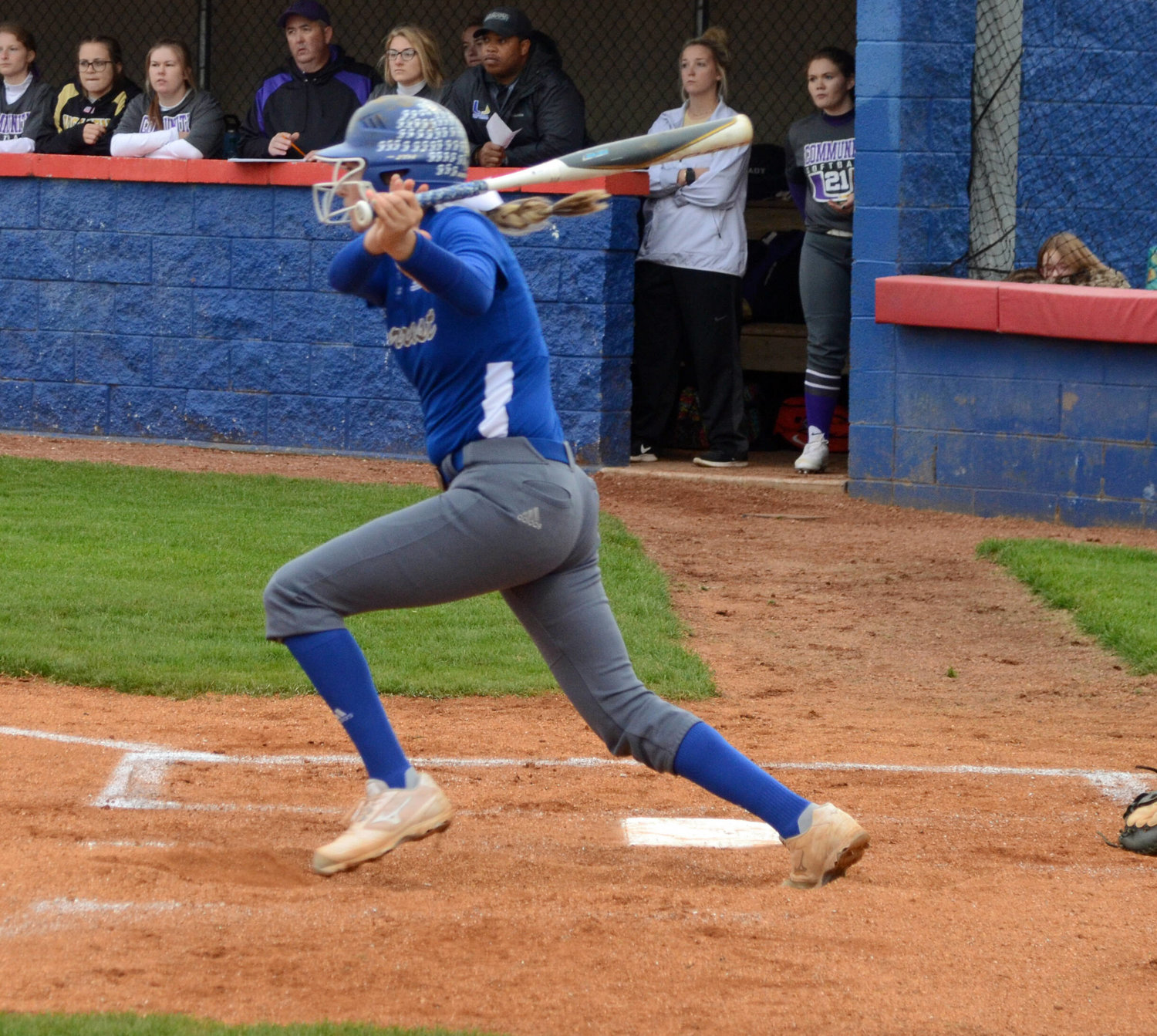 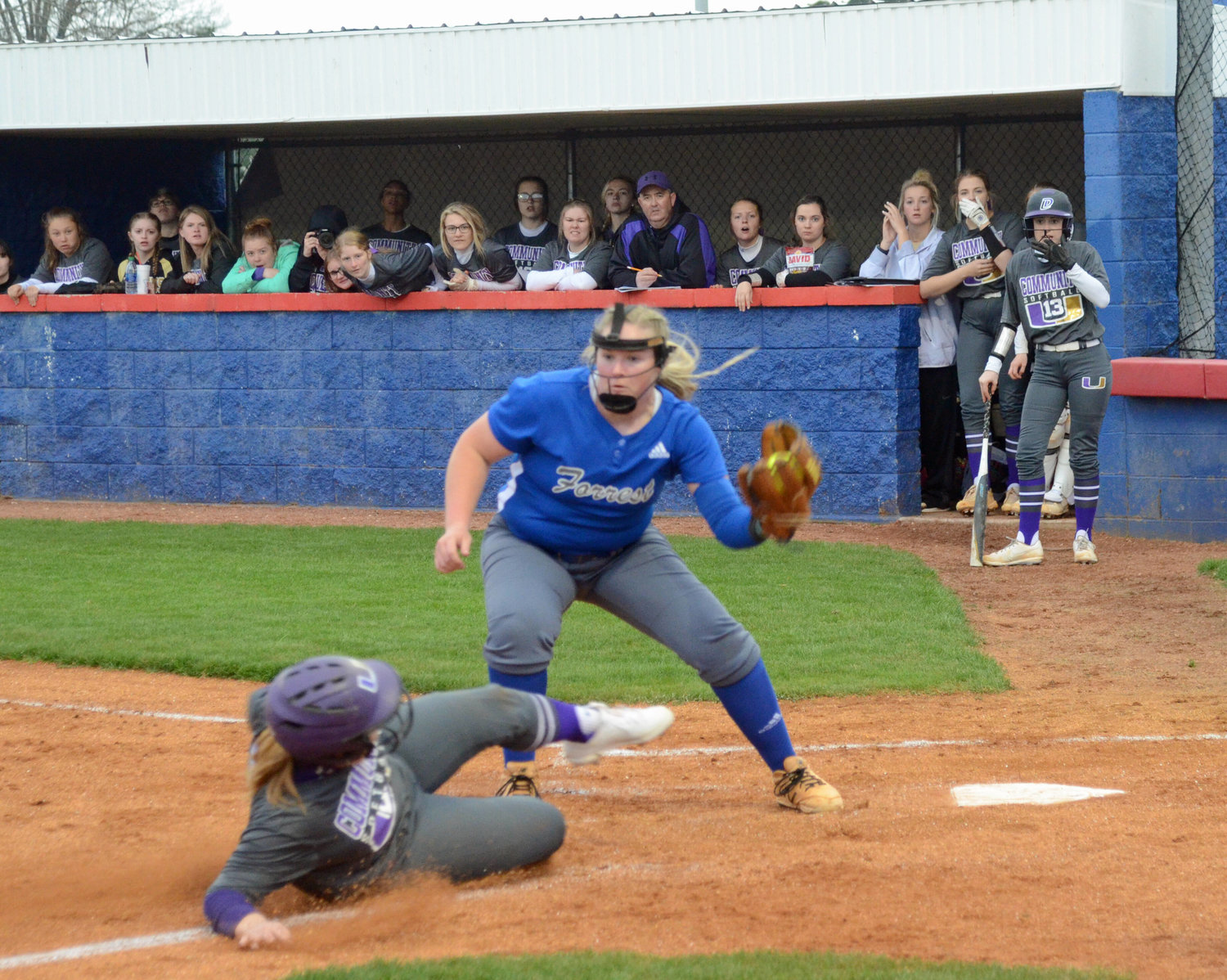 The Forrest Lady Rockets continued their early season hot streak, blasting the Community Viqueens 10-0 in six innings Tuesday night at the Field of Dreams in Chapel Hill in the District 12-AA opener.

“I thought Unionville came out and looked solid on the mound and hitting wise, it looks like a big improvement, so kudos to them,” Forrest coach Shelby Lightfoot said. “We were a little slow getting the bats going, we were kind of sporadic here and there, so our post-game talk was being a little bit more consistent through the whole game.”

Forrest freshman Abby Ferguson did heavy damage at the plate for Forrest, going a perfect 4-for-4 with five RBIs, including a laser beam two-run home run in the third inning.

“Fergie had a big night, which is huge for a freshman, she got us going and kept us going,” Lightfoot said.

Senior Laura Mealer played for the first time this season and went 2-for-3 and Macyn Kirby also had two hits in the 13-hit barrage off Community starting pitcher Hailey Mitchell.

Jenna Blanton, Karley Daughrity, Katelyn Helmick, and Briley Burnham all had one hit apiece for the defending Class 2A state champions.

Senior Ashely Milligan had one hit at the plate and tossed a two-hit, six inning shutout in the circle, tying her career high in strikeouts with 12.

“The run-rule was good, I’ll take that anytime,” Milligan said. “Just knowing that if I hit the strike zone, they are not going to touch it, so that gives me a lot of confidence.”

“It also gives me a lot of confidence when we have a great hitting team like us.”

Milligan struck out four out of the first six batters she faced in the game before Forrest put the first two runs on the board in the bottom of the second inning via a Ferguson RBI single and a fielder’s choice RBI by Burnham.

Community threatened in the top of third inning as Chloe West led off with a single to left field and after a Milligan strikeout, Zoey Dixon rapped a base hit to left field.

A wild pitch moved both runners up to second and third and it looked like the Viqueens would score when Milligan uncorked another wild pitch, but Forrest catcher Parker Wales made a great play on a ricochet off the backstop, tossing a perfect strike to Milligan, who tagged out West at home plate.

“Ashley is a great pitcher, she is lights out for us, but we do know a weak spot for us is when runners are on base, she gets a little excited, but we are fine tuning that,” Lightfoot said. “Lucky for us the ball came off just right and Parker made a great throw and we got the out to stop that momentum.”

A pop-up to Daughrity at third base ended the inning and the Viqueens never threated again on offense.

Daughrity drilled a leadoff double off the fence in center field in the bottom of the frame and came around to score on a Community error before Ferguson bashed her two-run shot to make it 5-0.

Milligan struck out the side in order in the top of the fourth inning and Forrest added run number six in the home half of the inning when Kirby came up with a bunt single and went to second on a wild throw before scoring on an RBI base hit by Blanton.

Milligan stayed in command in the circle in the top of the fifth inning, whiffing two out of the three batters she faced and Forrest failed to score in the home half of the inning.

Milligan ended her stint in the circle with a 1-2-3 sixth inning, including two more strikeouts.

Burnham led off the bottom of the sixth inning with a base hit, went to second on a wild pitch, and took third on a groundout.

Blanton followed with a walk and ran in between first and second base where Community tried to throw her out, but Burnham stole home on the play and Blanton ended up safe at second base.

Daughrity drove in Blanton with a fielder’s choice groundout make it 8-0 before Forrest loaded the bases on back-to-back hits by Mealer and Milligan and a hit by pitch on Helmick, setting the stage for Ferguson, who drilled the walk off single to center field, plating Mealer and courtesy runner Addison Bunty.

The Lady Rockets (5-1-1) travel to Lewisburg on Friday for an intra-county district battle with the Marshall County Tigerettes (3-0) with first pitch scheduled for 5:30 p.m. at Reese Hambrick Field.