Parker Wales and Carli Warner have been staples of the Forrest Lady Rocket softball program for several years.From their earliest time in youth leagues and middle school, through their state … 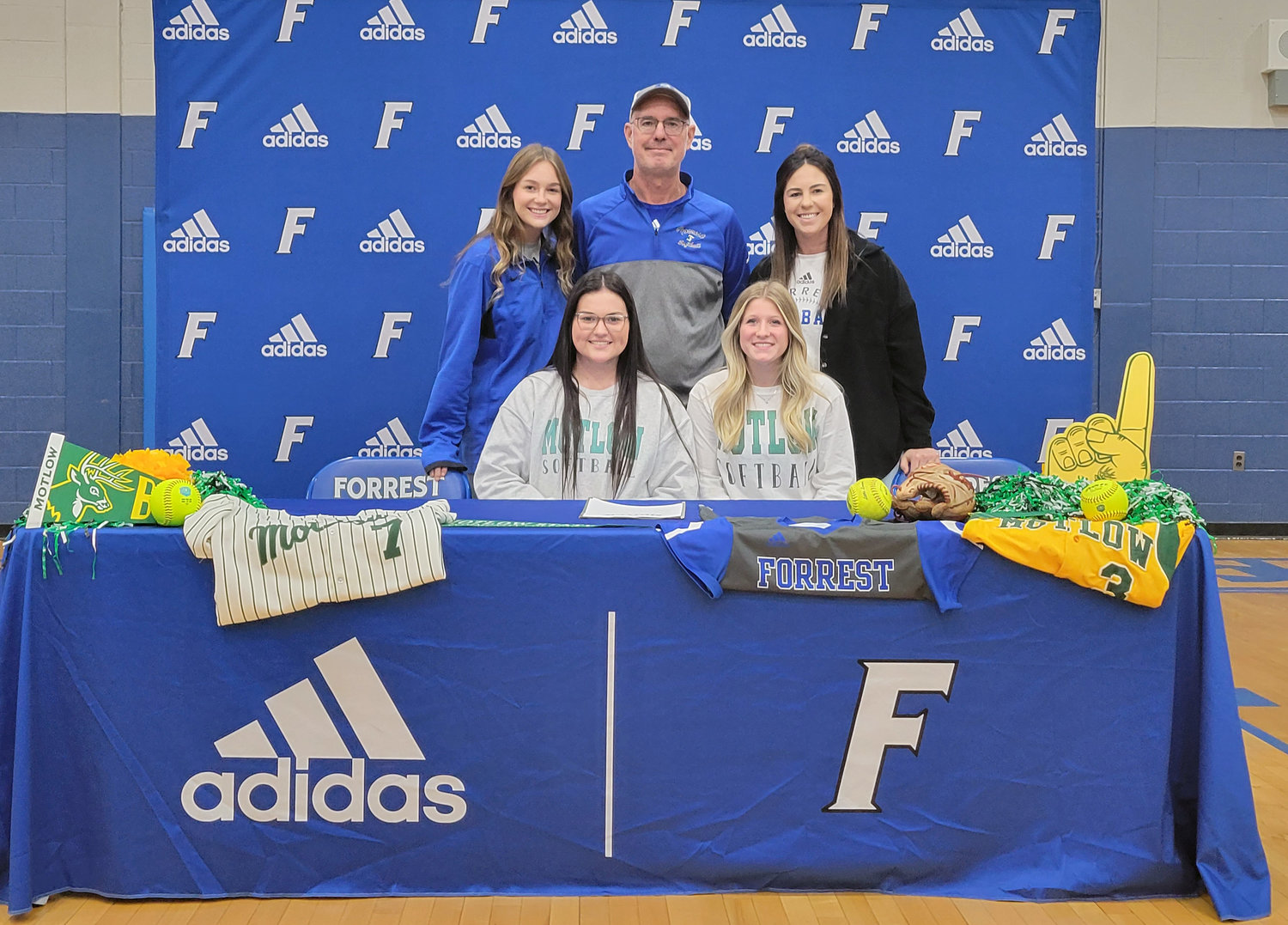 Parker Wales and Carli Warner have been staples of the Forrest Lady Rocket softball program for several years.
From their earliest time in youth leagues and middle school, through their state championship runs at the high school level, the two have become leaders on and off the field.
That combination of talent, drive and determination helped land the pair a spot at playing at the next level.
Last week, the Lady Rocket duo both signed their letters of intent to continue their softball careers at Motlow State Community College.
“In our program, it kind of starts when they’re young. We start having a hand in it in middle school—we say we’re Forrest softball. Starting in seventh grade, they’re getting to work out beside seniors,” Lady Rocket coach Shelby Lightfoot said.
“Having two signing to the same place is awesome. It’s a big accomplishment.”
Both Wales and Warner have become key leaders on the field with their consistent, outstanding level of play, from Warner becoming a reliable power hitter, to Wales’ efforts behind the plate and managing the Lady Rocket pitching staff.
“Parker Wales is behind the plate for us and has been a phenomenal catcher. For the past two years, she’s been agile and quick behind the plate. She’s kind of a silent leader that doesn’t speak up a lot, but when she does, her voice is heard,” Lightfoot said.
“Carli is our clutch hitter. She comes in when you need some momentum or a timely hit or something to happen. She was really big for us last year in the state tournament and also the year before. Although they’re different in styles, they balance each other very well,” Lightfoot added.
From their youngest days stepping on the field, to last week’s signing, the journey has been a culmination of drive and determination that certainly paid dividends for the pair from countless hours of work.
“It’s kind of surreal because I never thought I would make it this far, even though it was my goal. It just seems so unreal to be able to go somewhere and play at the next level,” Wales said.
“I started when I was three and just played tee ball. I started playing travel ball when I was around 12 and that’s when it picked up,” she added.
Warner echoed Wales’ sentiments when recalling the many years of work she’s put into the sport and Lady Rocket program.
“This is something I’ve worked for my whole life. I’ve known ever since I was eight years old playing on that field that I’ve wanted to go play at the next level. It’s so relieving that I’ve taken all the chances I can and have achieved this opportunity,” she said.
Having played in the state championship in the past two years, the pair have been part of a community that has embraced the winning tradition of the Lady Rocket program and bringing home the state championship in 2021 and finishing runner-up in 2022.
Throughout all the memories she’s had playing softball, being part of the state championship team was among Wales’ favorite.
“Definitely the state championship. Probably my favorite was after the state championship, the bus ride home was so fun. We just danced and listened to music. It was so fun,” she said.
Warner agreed on a broader scale that being part of the community that’s so supportive of their play on the field and being able to look up in the stands and see a crowd full of the community supporters is a memory she’ll always cherish.
“Every program I’ve played for, whether basketball or whatever, it’s all about Forrest and just playing for my town. They follow you to the state tournament—they’re always there. I think it’s having someone to play for and knowing they have my back,” she said.
When it came time for the pair to begin their college search, both had several schools in the mix, but ultimately, it was the closeness of Motlow and the small-school environment that landed the Lady Rocket pair.
“They were really far away from my family and I didn’t think I’d be able to go that far away from them. Motlow is definitely a great option,” Wales said.
“I knew I wanted to go to a smaller school. It felt like home when I went there. I love the coaches and I knew that’s where I wanted to go,” Warner said.
As for their transition to the college level, Lightfoot thinks the pair will become immediate contributors at the collegiate level.
“I think they will fit in seamlessly just because of their hard work and determination. They’re going to come in, give you everything they’ve got and they love the game. A lot of it is, “do you love the game enough to play at the next level?” I have no doubt they do,” she said.
For now, the focus turns to their senior season and making a return trip to the spring fling with the hopes of bringing home another state title.
Lightftoot has high expectations from both of her senior leaders.
“Senior year, behind the plate, we talk about Parker being communicative behind the plate because we do have a younger pitching staff. So she doesn’t only manage one pitcher, she now has to manage five or six,” she said.
“Carli, again, being the vocal leader, coming through, getting people going and getting those big hits and leading her team in a way that keeps her momentum going throughout the game.”
Once they get to Motlow, the pair will become roommates and not only be teammates once again, but both also plan on pursuing degrees in nursing.
Being able to room with Warner and go through the college experience with her high school teammate was a big draw for Wales.
“It means a lot because we can go through stuff together for the first time and we’re going to room together,” she said.