CHAPEL HILL — It was a tale of turnovers and a tough night on the glass for the Forrest Lady Rockets Monday night, despite a stellar outing by senior Macyn Kirby.The Lady Rockets hosted the … 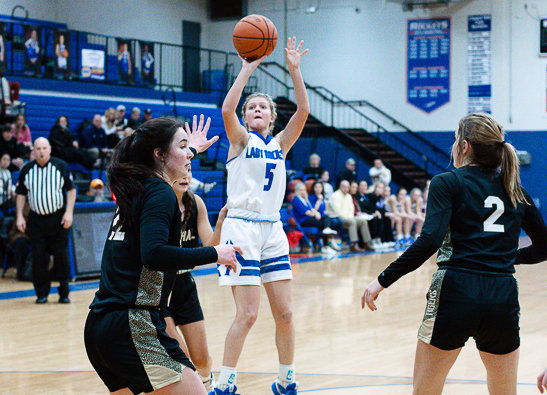 Macyn Kirby shoots the jumper in the first quarter. She led with 27 points.
Tribune Photo by Kacy Kincaid 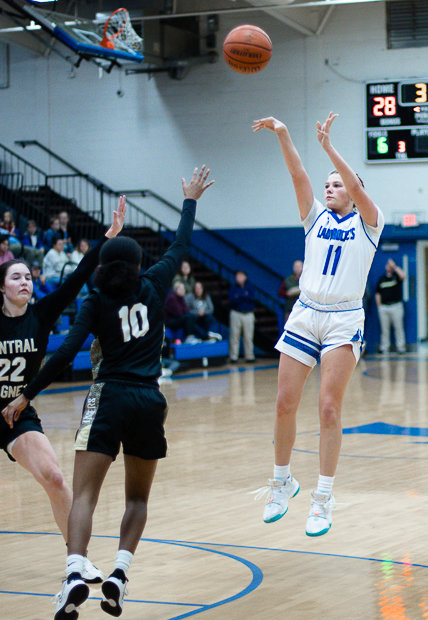 CHAPEL HILL — It was a tale of turnovers and a tough night on the glass for the Forrest Lady Rockets Monday night, despite a stellar outing by senior Macyn Kirby.
The Lady Rockets hosted the Central Magnet Lady Tigers, who took the 62-49 win.
The first few minutes were an even matchup, but it didn’t last long as the Lady Tigers went on a scoring run to take a 16-7 lead going into the second quarter.
The outsized Lady Rockets held their own in the paint defensively, forcing the Tigers to up their perimeter play, and they did not disappoint, knocking down six threes in the first half.
Central executed a full-court press that created multiple Forrest turnovers and a scoring drought that lasted two minutes.
Before the half, Forrest found its groove and Kirby knocked down a three-pointer and on the next play, found senior Samantha Hopkins posted up on the block for an additional two.
Megan Mealer picked off a pass moments later to ride in for the easy layup.
The Tigers held a strong 32-18 lead at the half.
The groove the Lady Rockets found before the half continued on in the third. Forrest closed the gap within a few minutes to give Central Magnet only a single digit lead, with Kirby and Kinslee Inlow both having their biggest quarter of the game with eight points each.
But the turnovers and lack of rebounding continued to keep Forrest out of reach.
The Lady Rockets did a good job of moving the ball and driving to the basket during the second half, but it was too little too late.
The Tigers continually answered made baskets at the other end of the court.
Kirby led the Lady Rockets with 27 points and Inlow contributed 13.
The Tigers had multiple players in double digits, Olivia Hart leading her team with 19.
The Lady Rockets will travel to Unionville Friday night to take on the Community Viqueens.
Tipoff is set for 6 pm.