SHELBYVILLE — Last week in the Marshall County Tigers’ season opener, head coach Thomas Osteen was pleased with his team’s win, but knew his offense was capable of more effectively … 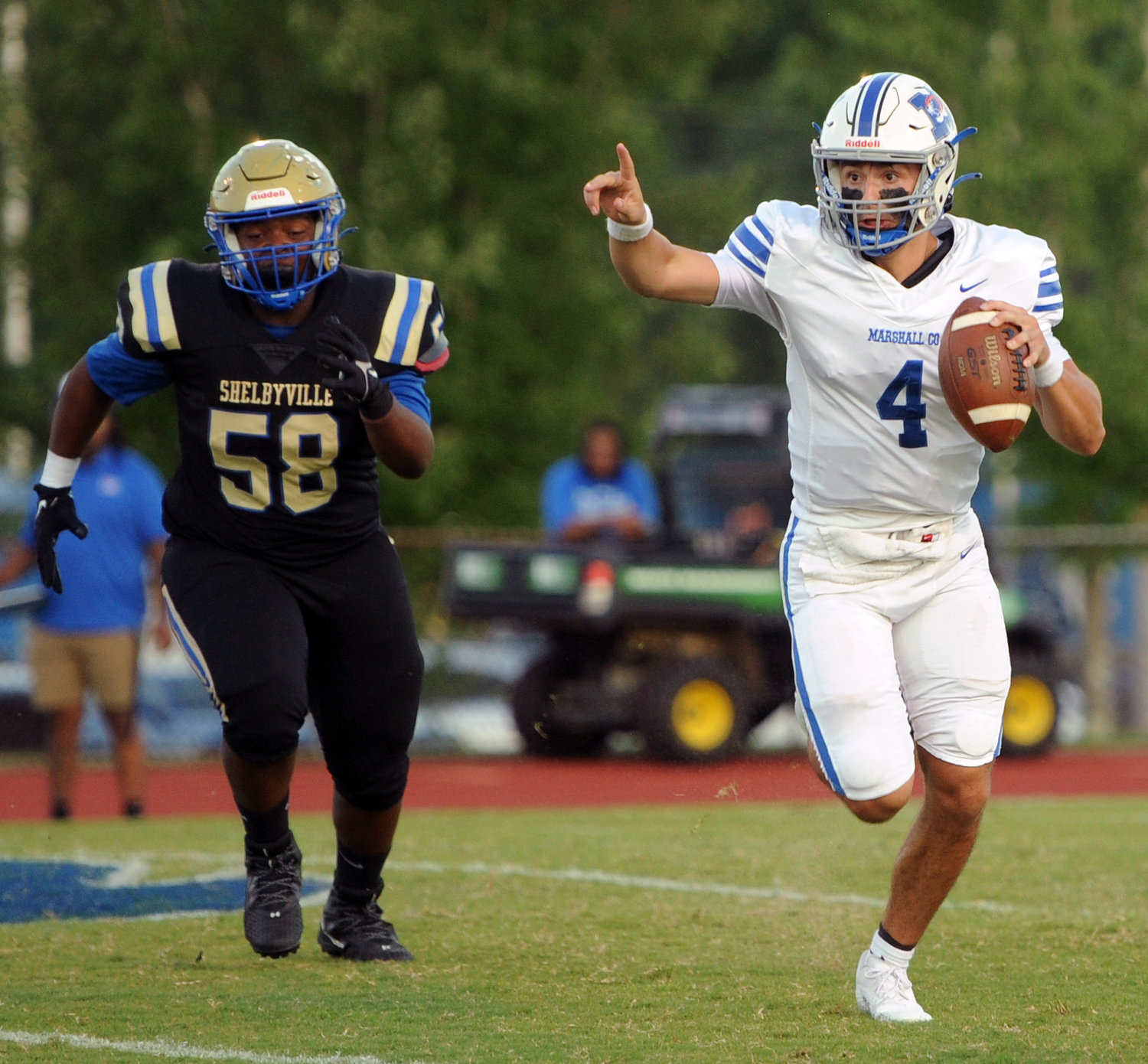 Tiger quarterback Silas Teat points out his blockers as he’s flushed from the pocket on the game’s opening drive on Thursday night.
Tribune Photo by Chris Siers 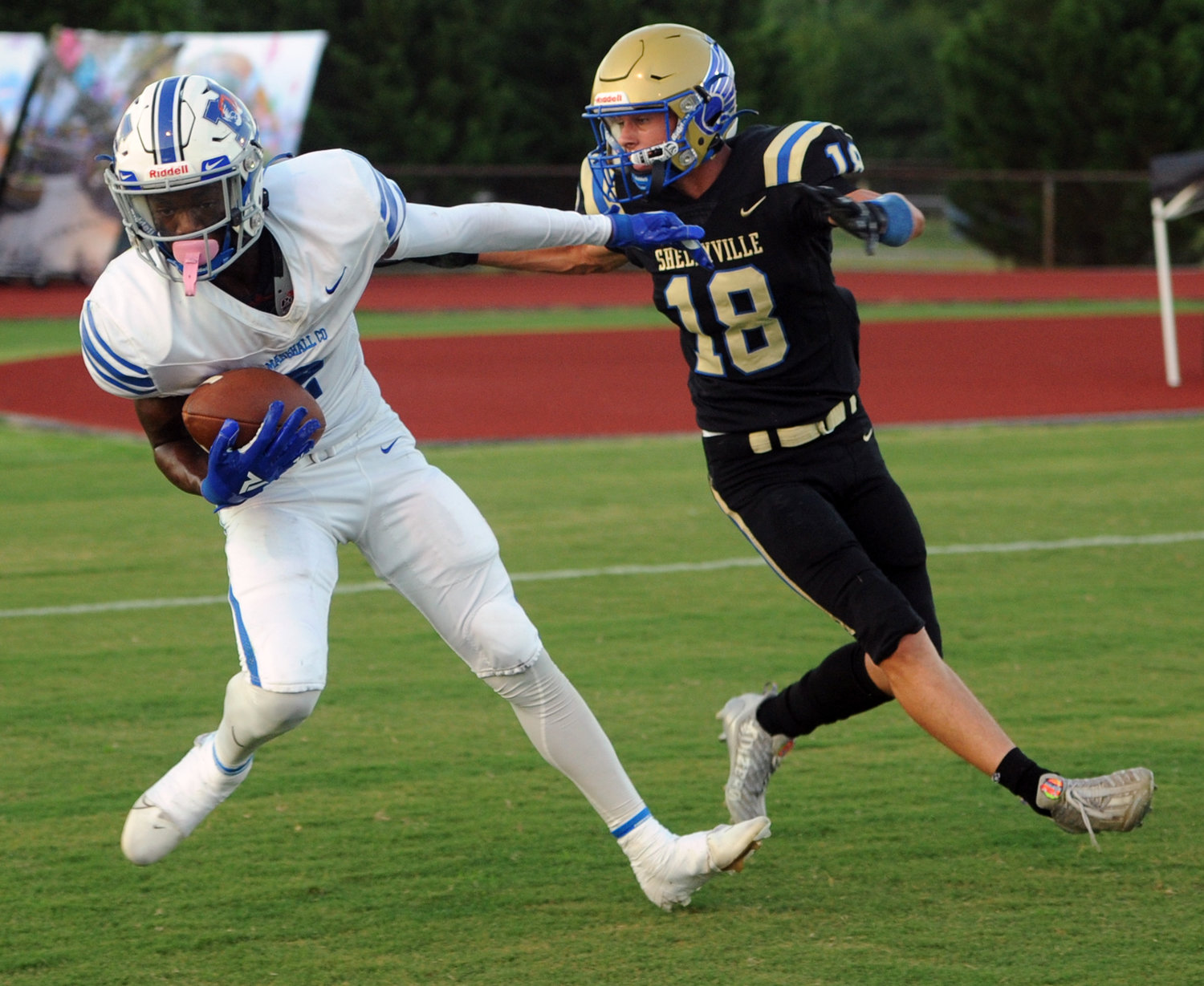 Aja Jones adjusts to the ball and makes a one-handed touchdown pass from Teat. He finished with six catches for 142 yards and two touchdowns.
Tribune Photo by Chris Siers 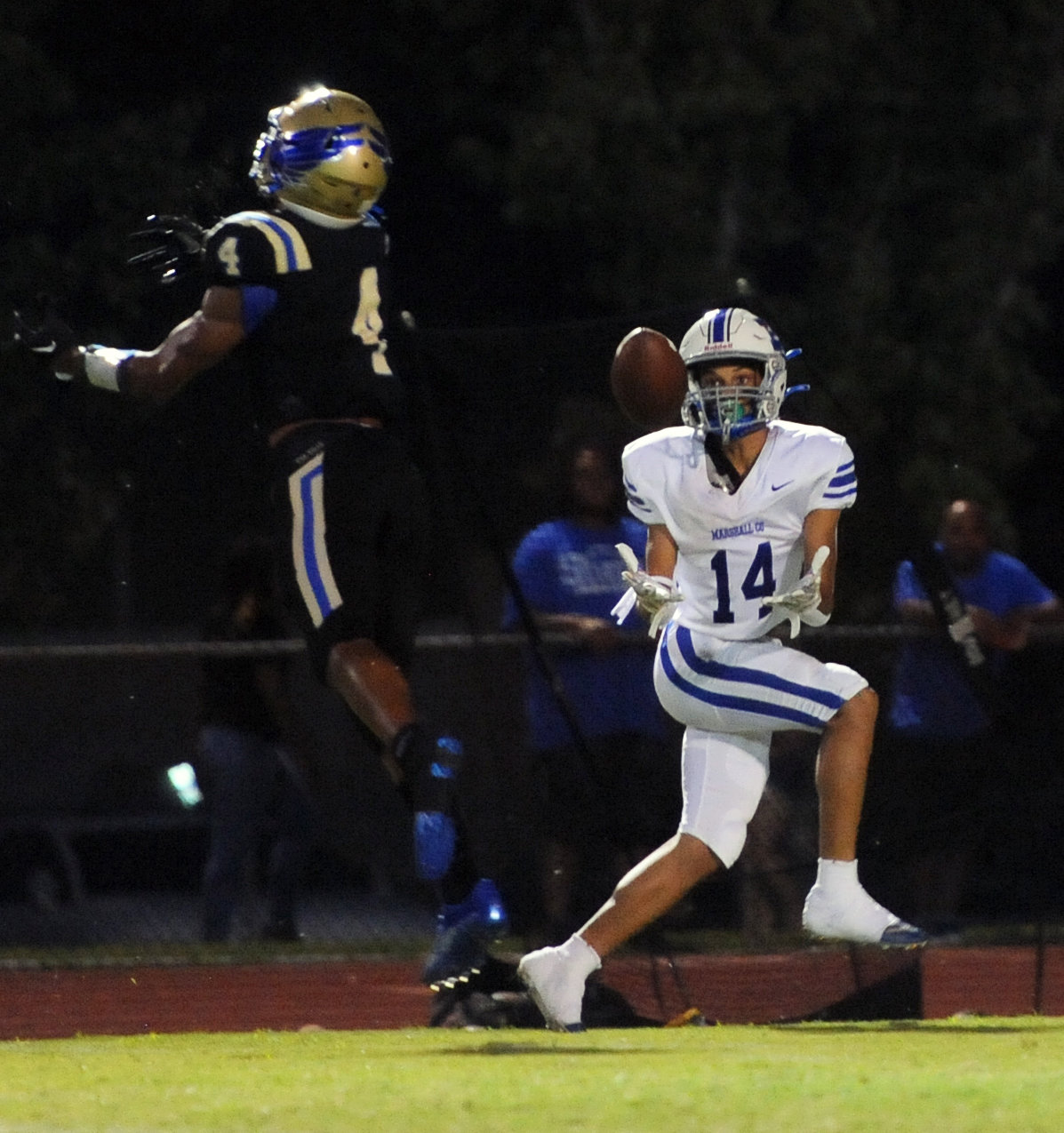 Marcus O’Neal hauls in a 47-yard touchdown pass, scoring his second of the night for the Tigers.
Tribune Photo by Chris Siers 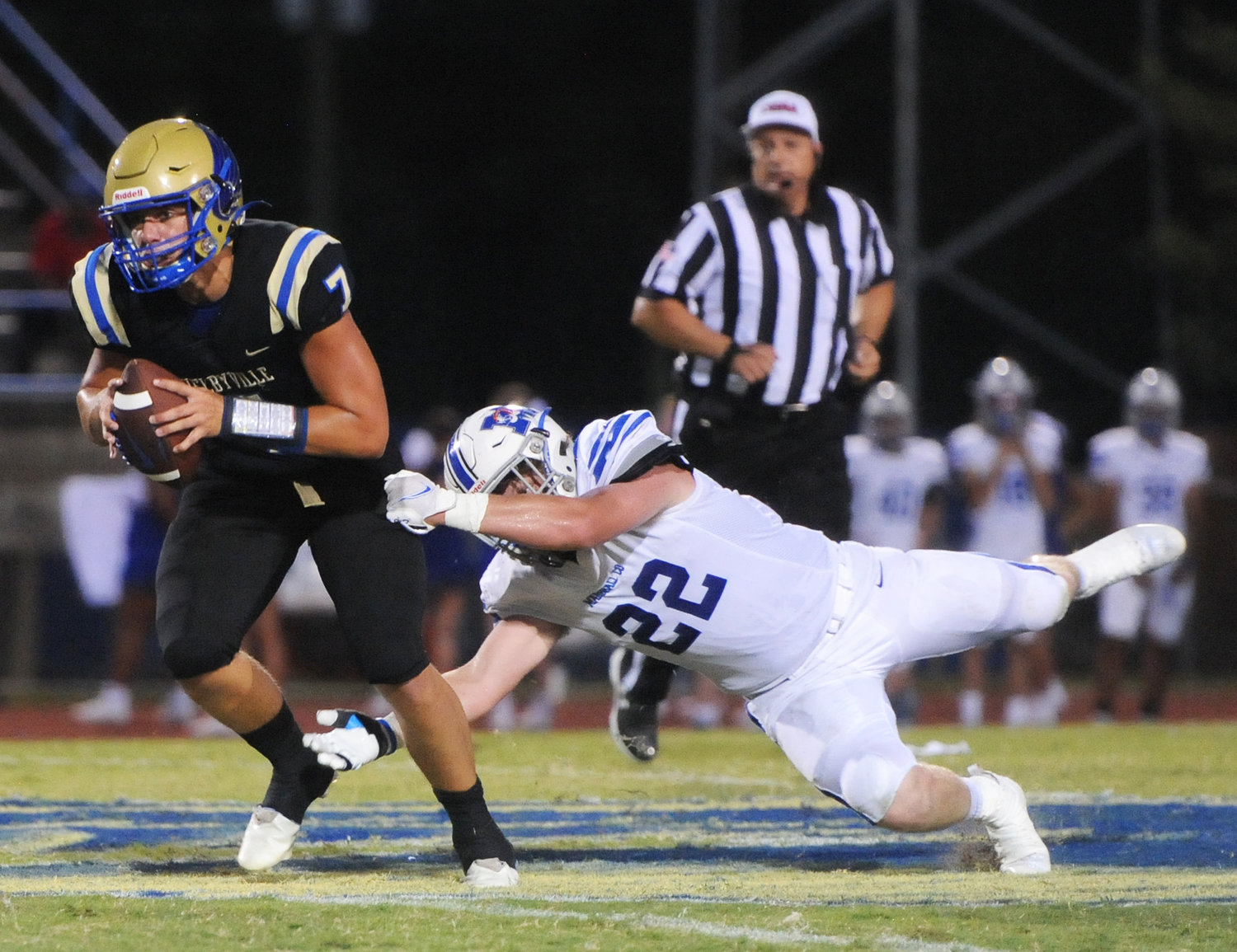 SHELBYVILLE — Last week in the Marshall County Tigers’ season opener, head coach Thomas Osteen was pleased with his team’s win, but knew his offense was capable of more effectively pushing the ball downfield via the pass game.
In Week 2 against Shelbyville Central (0-2), that was a key focus of the offensive scheme and the Tigers (2-0) showcased just what they’re capable of in a 36-14 win over the Golden’ Eagles.
“It was definitely in the game plan. They pretty much keep seven in the box the majority of the time. They’re going to give you problems and have some guys you can’t block from time to time. So, we knew we had to take some shots. We knew we weren’t going to hit all of them, but I was happy with the ones we did,” Osteen said.
Junior quarterback Silas Teat completed 13-of-19 pass attempts for 215 yards and four touchdowns, completing passes to four different receivers.
Aja Jones was the top target of the night, hauling in six catches for 142 yards and a pair of scores.
“He (Jones) is special. He’s just a sophomore. He makes the coaching staff look good. We’re just tickled to death with what he does for us. It’s going to be amazing what he does in the next couple of years,”Osteen said.
The Tigers took the opening drive 70 yards and milked over six minutes off the clock, twice converting on third down, before Teat connected with a perfect ball to the corner of the end zone to Jones for the first score of the night.
Shelbyville answered and moved the ball effectively on its first drive, also converting on a key third down, before Thomas Beech picked off Eagle quarterback Jake Preston and returned it to the Tiger 37-yard line.
On the first snap following the turnover, Marcus O’Neal found a crease and streaked down the visitor sideline 68 yards for the score.
Wyatt Joyce’s successful kick after put the Tigers up 14-0 by end of the first quarter.
O’Neal struck again in he second quarter, this time hauling in a 47-yard touchdown pass from Teat and with Jayden Randolph’s successful 2-point conversion run, the Tigers held a 22-0 lead at the half.
While the Eagles struggled to finish sustained rives in the first half, Shelbyville did manage to cut the Tiger lead to two possessions in the third quarter.
After their first drive of the second half stalled near their own 41-yard line, Marshall County came through with a blocked punt, giving the Tigers prime field position.
But Marshall County was held in check and following a turnover on downs on a fourth-down pass attempt, Shelbyville was able to take advantage on a Rocky Chandler 13-yard touchdown run with 2:03 left in the third.
The Tigers needed just two plays to answer, with Teat connecting with Jones again, this time on a 61-yard strike with 1:07 left.
Both teams found the end zone one more time—Shelbyville on a Preston 48-yard pass to Micah Threatt with 8:22 left.
Teat finished with his fourth passing touchdown of the night, a one-yard pass to Jayden Randolph in the back of the end zone with 4:18 left in the game.
“Shelbyville has so many talented players. Coach (Jud) Dryden has done a really good job. They’re young, but they’re going to be really good in the next couple of years,” Osteen said.
“Hate we couldn’t put the game away there in the third quarter, but happy with the way we responded and happy with the way we finished in the fourth quarter.”
Last week, senior tailback Demari Braden was the bell cow for the Tigers and rushed for over 150 yards and a pair of touchdowns against Columbia.
Nursing an ankle injury, the Tiger run game became a running back by committee and the Marshall County depth showcased just how valuable it is.
“He tweaked his ankle last week, so he was going in this game about 75 %. He tweaked in in about the third or fourth play. If it had been a playoff game, he probably could still gone. Hopefully he can be healed up here pretty soon,” Osteen said.
Antomme Cowthorn had three touches for 31 yards, but it was Marcus O’Neal who totaled the most yardage for the Tigers.
He had just one carry, but took the snap 68 yards to the house for the Marshall County score.
“Marcus O’Neal didn’t play much last week and a lot of years, he would be our No. 1 receiver for us, but we’re pretty deep at receiver. We told him he would be in the game plan and get some touches tonight and lo and behold, he scores two touchdowns tonight,” Osteen said.
Shelbyville out-gained the Tigers on the ground 153-117 yards and were led by Chandler’s 20-carry, 90-yard night.
Preston added 14 carries for 48 yards as well.
In total, the Tigers mustered up 333 total offensive yards, while holding the Eagles to 275.
With the start of a brutal, eight-game region slate starting next week at Creek Wood, Osteen said the challenge now becomes treating each game as a one-week season.
“It’s a grind. It’s a one-week season every week because every game is going to matter so much. We’re the biggest region in the state. It’s tough mentally each week, you’ve kind of got to be all in,” he said.
Kickoff is set for 7 p.m. in Charlotte.