It’s tough when you’ve got a machine rolling and you take a hit to that image—especially when you weren’t considered to be a player in the first place.The Titans once again … 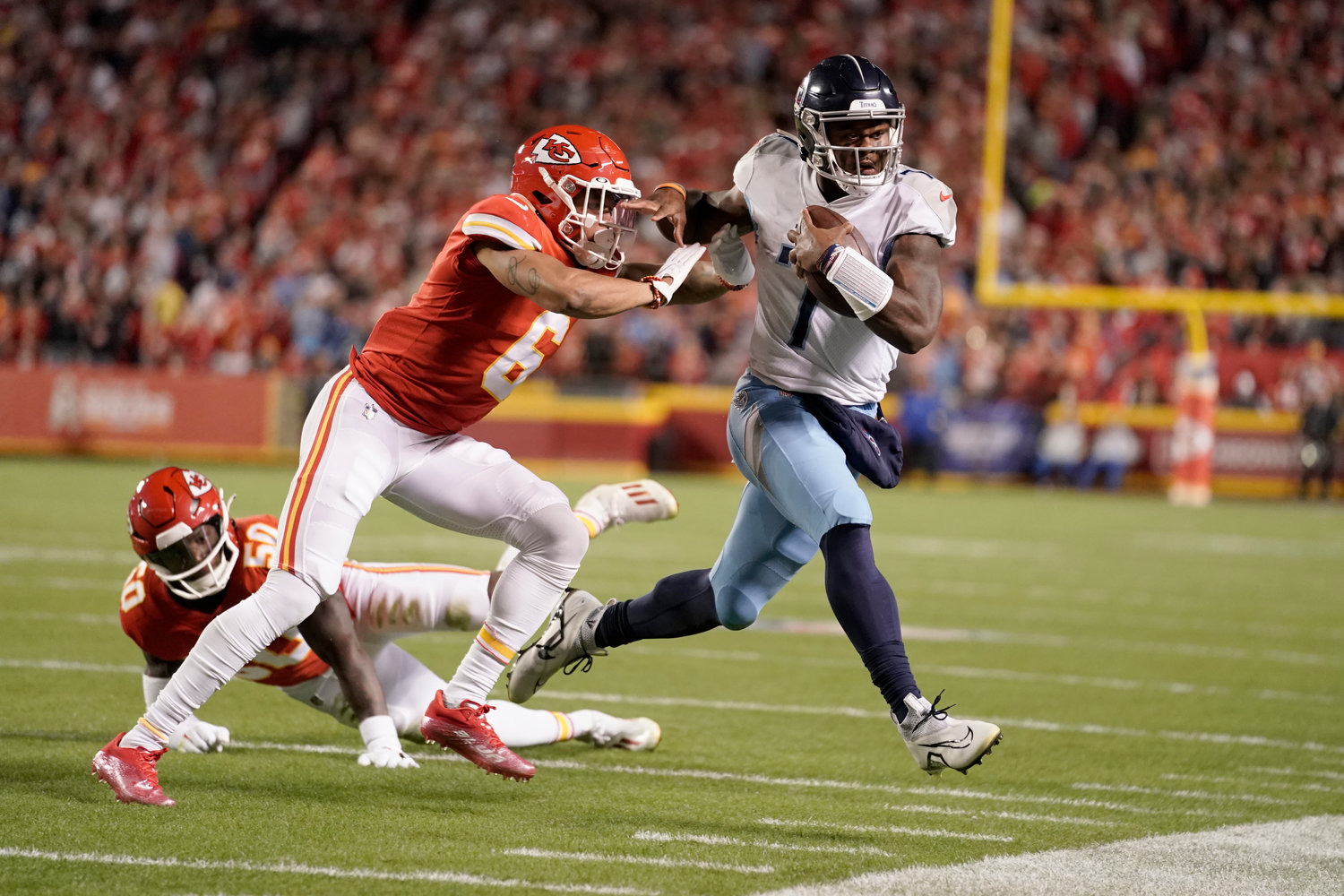 It’s tough when you’ve got a machine rolling and you take a hit to that image—especially when you weren’t considered to be a player in the first place.
The Titans once again found themselves on the outside of the national media’s favorites, which could be expected after starting the season with losses to the New York Giants and Buffalo Bills.
But after that 0-2 start, the Titans rattled off five-straight wins and quickly grabbed control of the AFC South lead.
Even after starting quarterback Ryan Tannehill injured his foot against the Colts on October 23, the Titans turned to rookie third-rounder Malik Willis.
After his debut last week against the Texans, it’s clear Willis isn’t ready to be the everyday starter as his style of play at Liberty doesn’t necessarily transition well to the NFL.
The tools and mechanics are there’ but it’s almost like rebuilding a quarterback from the ground up.
With the Titans rolling into Kansas City on Sunday night prime time, fans and pundits alike pinning the blame on Willis is rather inexcusable.
His second-ever start in front of a national audience and facing arguably the greatest quarterback talent to ever play the game in Patrick Mahomes, Mike Vrabel and the coaching staff weren’t going to ask Willis to get into a run-and-gun shootout with Mahomes.
Instead, Willis was going to have to be surgical in his throws and rely on Derrick Henry to be the bell cow of the offense.
Henry delivered for much of the first half.
He went on to finish with 115 yards on 17 carries and a pair of scores.
But the bigger issue is, Willis did what he was asked.
Was his stats line of 5-for-16 for 80 yards impressive? Absolutely not. But he added 40 yards on eight carries and didn’t do anything to cost the Titans the game.
As a rookie still transitioning to the NFL, that’s exactly what you want out of a quarterback put in that situation when he’s not ready.
Look around the NFL from Sunday: Aaron Rodgers went 23-for-43 for 291 yards and one touchdown and three interceptions; Josh Allen went 18-for-34 for 205 yards and two interceptions; P.J. Walker went 3-for-10 for nine yards and two interceptions.
Those quarterbacks all made mistakes that led to eventual losses—Willis didn’t do that.
No, Sunday’s loss wasn’t on Willis in the slightest, but rather the Titans’ front office for not having a NFL-ready backup to go in the event of a Tannehill injury.
With the trade deadline having come and gone, the Titans stood pat and didn’t make a move. There are free agent quarterbacks out there capable of spot starts and even quarterbacks on the trade block the Titans could have made a move for.
Instead, the front office decided to hope Willis would be ready before his time and Henry could deliver more of his history-making magic.
Willis’ numbers through two starts should be taken with a grain of salt at this point. He’s been in the system less than nine months and any player who transitions from college to the NFL will tell you, it’s not an easy task, and for a quarterback having to relearn proper mechanics, having to unlearn what’s made you successful is about as easy as learning how to walk again.
The loss absolutely hurts, but if fans and pundits are going to point fingers and blame at someone, do it at the front office, not at the guy who was put in a no-win situation.
Chris Siers is sports editor of the Tribune. Email him at sports@t-g.com.