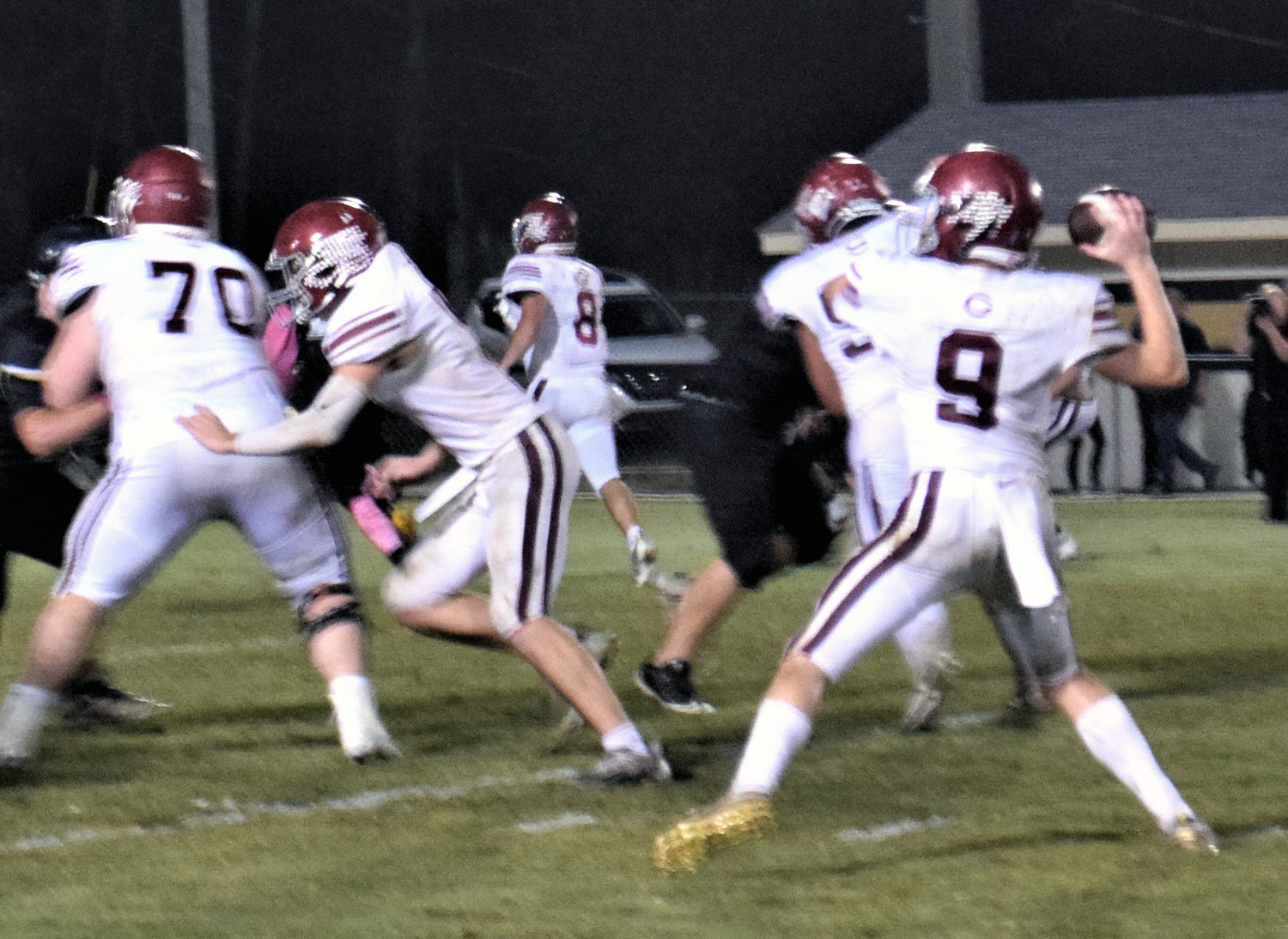 Blaine Woodard drops back and delivers a pass on target against Wayne County.
Tribune Photo by Dennis Holley 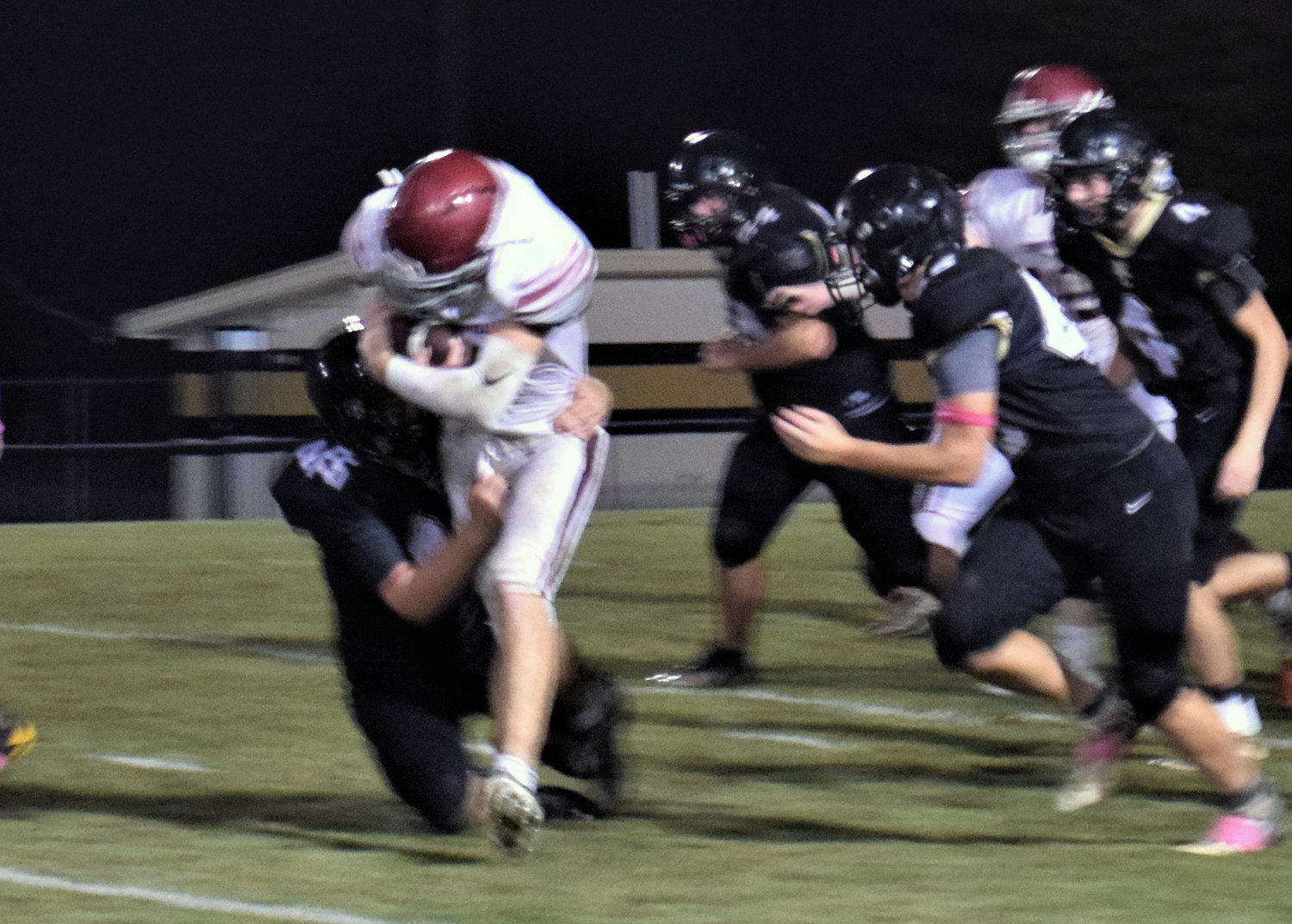 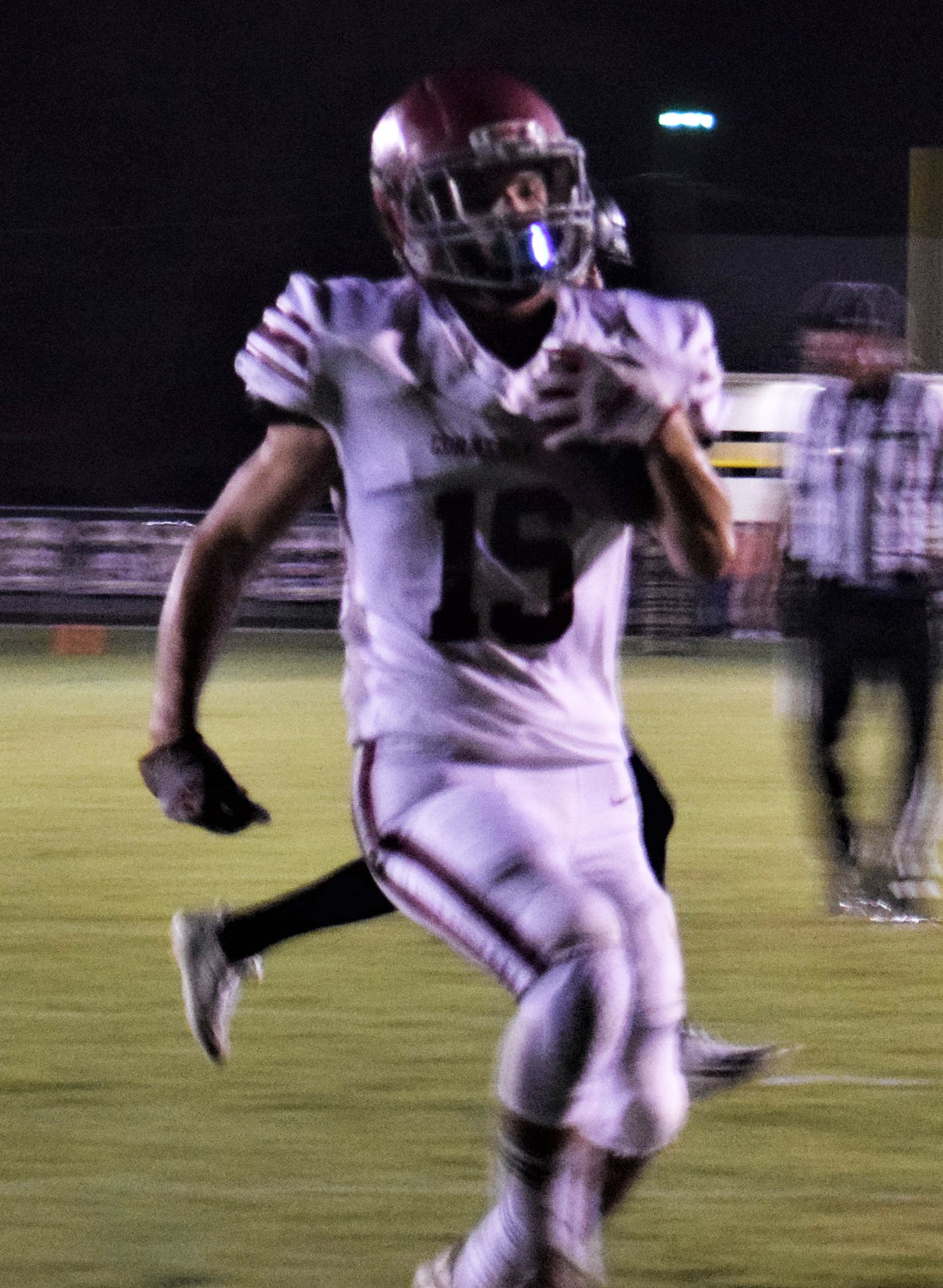 WAYNESBORO — The Cornersville Bulldogs, urged on by their fanbase that numbered more than the hometown fans, limited Wayne County to only 117 yards of total offense while moving the ball effectively themselves in a 31-0 win.

The Bulldogs were led by Riley Qualls, rushing for 47 yards on six carries, also managing to pick up a Wildcat fumble and raced untouched into the end zone for a touchdown.

Quarterback Blaine Woodard, growing increasingly comfortable leading the offense, threw the ball well, going 7-for-12 for 62 yards and a touchdown and adding a 26-yard touchdown run to boot.

"I thought our guys came out playing physical football— our brand of football. I thought we set that tone early,” Bulldog coach Gerard Randolph said.

The Wildcats won the coin toss, elected to defer to the second half and kicked off to the Bulldogs where Rhett Woodard gathered it in on the 25-yard line and carried it to the Cornersville 43-yard line.

The Bulldogs began their initial drive pounding the Wildcats on a 10-play drive utilizing their deep stable of running backs.

Using up half of the first quarter the Bulldogs with 7:41 left in the quarter were on the Wildcat nine-yard line but a holding penalty moved them back to the Wayne County 19-yard line.

Then Woodard found Wesley Pigg out on the right flat, where he gathered in the pass, broke to the center of the field, and raced untouched into the end zone for the touchdown.

When Logan Springer split the uprights for the PAT with 6:46 remaining in the first quarter, the Bulldogs were in front, 7-0.

The Wildcats responded after the ensuing kickoff, when after a first down, quarterback Austin Whitson broke loose on a run around the right side into the end zone but a block in the back brought it back and the Bulldog defense forced a punt and Cornersville was in business at their own 43-yard line.

Qualls shook loose on a 31-yard run down to the Wildcat 26-yard and after an incompletion Blaine Woodard raced around the left side and rambled into the end zone for the score. Springer nailed the PAT and the Bulldogs with 3:17 left in the first quarter led 14-0.

The second quarter was scoreless for both teams with defensive domination by the Bulldogs keeping the Wildcats hemmed in and the Cornersville offense struggling with consistency,

As lightning flashed in the distance the half ended with Cornersville leading 14-0 over the Wildcats.

Having won the coin toss and deferring until the second half the Wildcats fielded Cornersville’s Eli Welch’s kick at the Wayne County 28-yard line where Pigg tackled Whitson for no-gain.

The Wildcats on first down attempted a pass but Cornersville’s Blake Estes was on the job, and it fell incomplete.

On second down, Wayne County ball carrier Whitson was stood up by three Bulldogs and the ball popped out onto the ground where the ever-alert Qualls picked it up and raced into the end zone. Springer again kicked the PAT, and with 21 seconds gone in the third quarter, Cornersville pushed the lead to 21-0.

The Cornersville defense, responding to Randolph’s halftime instructions, were laying licks on the Wildcat runners and forced a three-and-out to give the ball back to the Bulldogs.

The Bulldogs began the fourth quarter with another long drive, using up half of the fourth quarter, finishing off a 10-play drive with a 20-yard field goal by Springer to increase the led to 31-0 with 6:15 left in the game.

The Bulldog defense, still slamming the Wildcats, despite using younger players, kept the Wildcats at bay and the Bulldog offense got the ball back with 28 seconds left in the game and in their victory formation, Blaine Woodard took a knee, and the Bulldogs gained an important Region 5-1A victory.

Coach Randolph complemented Riley Qualls and Wesley Pigg by saying, “These two guys give their all each and every time they get the opportunity to go on the field. I am just happy that they had such a good game tonight.”

On Friday night the Bulldogs host Moore County in another important Region 5-A contest.

Randolph added, “Moore County is a big Region 5-1A game.”