CORNERSVILLE — It was a long and wet night in Cornersville as lightning forced delays and rain poured down, but the Bulldogs prevailed in their 24-0 victory over the Huntland … 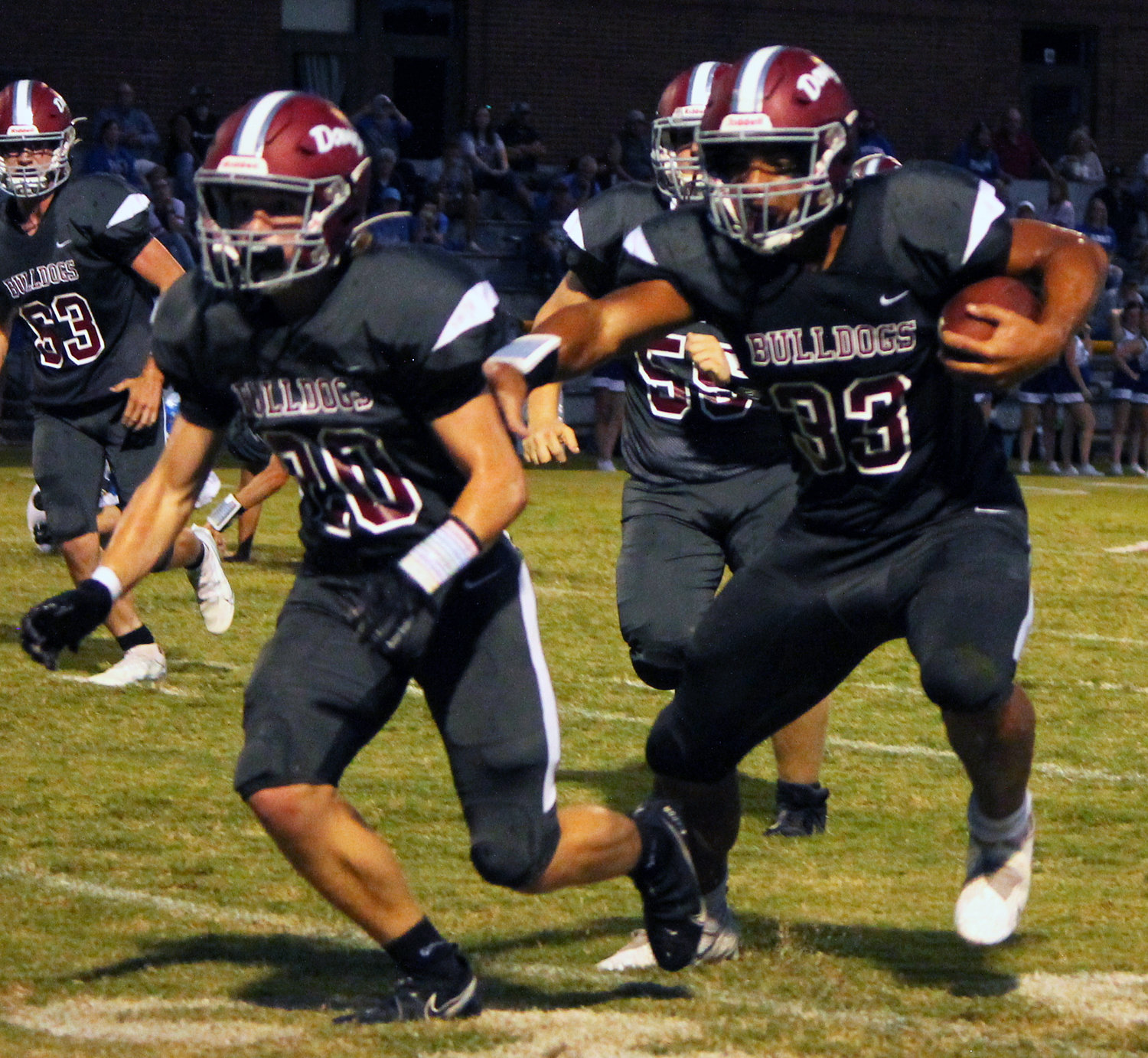 Running back Ben Franklin follows his blockers on a first down run against Huntland Friday night. Franklin had one touchdown on the night.
Tribune Photo by Will Carter
Posted Saturday, September 3, 2022 12:51 pm

After the first quarter delay, our attitude completely changed. We made some adjustments, and the team executed them well. It was a great team win.”
Bulldog coach Shelby Waddell

CORNERSVILLE — It was a long and wet night in Cornersville as lightning forced delays and rain poured down, but the Bulldogs prevailed in their 24-0 victory over the Huntland Hornets.
Outside of the wild weather, it was a night to remember for Cornersville head coach Shelby Waddell as he grabbed his first win as the man in charge of the Bulldogs.
“The team did a great job tonight of responding,” waddell said.
“After the first quarter delay, our attitude completely changed. We made some adjustments, and the team executed them well. It was a great team win.”
Before the first lightning delay hit with a minute and 20 seconds left in the first quarter, Cornersville (1-2, 1-1) was threatening to score inside Huntland (0-2, 0-1) territory.
The action started back after the 30-minute delay, and the Bulldogs picked up where they left off.
With a minute and one second left in the first quarter, senior running back Riley Qualls rushed into the end zone from 10 yards out for the first touchdown of the game.
A missed extra point left the score at 6-0.
Qualls scored two touchdowns on the night while also contributing on defense by disrupting Huntland drives with key tackles in the backfield.
“He (Qualls) gives his all for Cornersville every day in everything he does,” Waddell said. “I don’t think I’ve coached a kid with a higher motor than him. I was glad he was able to score tonight and I can’t say enough about him.”
What began as a light rain shower after the first delay quickly turned into a thick band of rain that didn’t let up for the rest of the game.
The conditions made it difficult for either team to put together anything offensively and the second and final lightning delay hit with three and a half minutes left in the first half.
Play restarted after 30 minutes, but Cornersville carried its 6-0 lead into halftime.
After the shortened halftime, the Bulldogs found their footing and relished in the rain.
With three minutes and 27 seconds left in the third quarter, Qualls found the end zone again on a 21 yard run.
He also scored on the two-point conversion to give his team a 14-0 lead.
Not too long after, the Bulldogs were threatening again, and junior running back Ben Franklin put them on the board nine seconds into the fourth quarter on a 23 yard run.
Quarterback Blaine Woodard snuck in for the two-point conversion to make it a 22-0 lead for the Bulldogs.
The final points of the game came from the Cornersville defense as they backed Huntland up to their own end zone, and forced a safety on a blocked punt to bring the game to its final score of 24-0 with nine minutes and 17 seconds left in the fourth quarter.
The Bulldogs’ defense continued to hold strong and force turnovers that eventually led to their offense lining up in victory formation to end the game.
Waddell was proud of his team for persevering in the conditions and pushing for the win.
“With things like that, I like to say ‘so what? now what?,” Waddell said. “If something happens, you just gotta move onto the next play. We did a great job of that tonight. A lot of teams would have let the delays and the rain get to them, but they did a great job of staying focused. They never showed their fatigue, so it was great.”
The Bulldogs will hit the road next week for a matchup with the Clay County Bulldogs at 7 p.m. in Celina.