Bulldogs pull away over Rockets in season opener 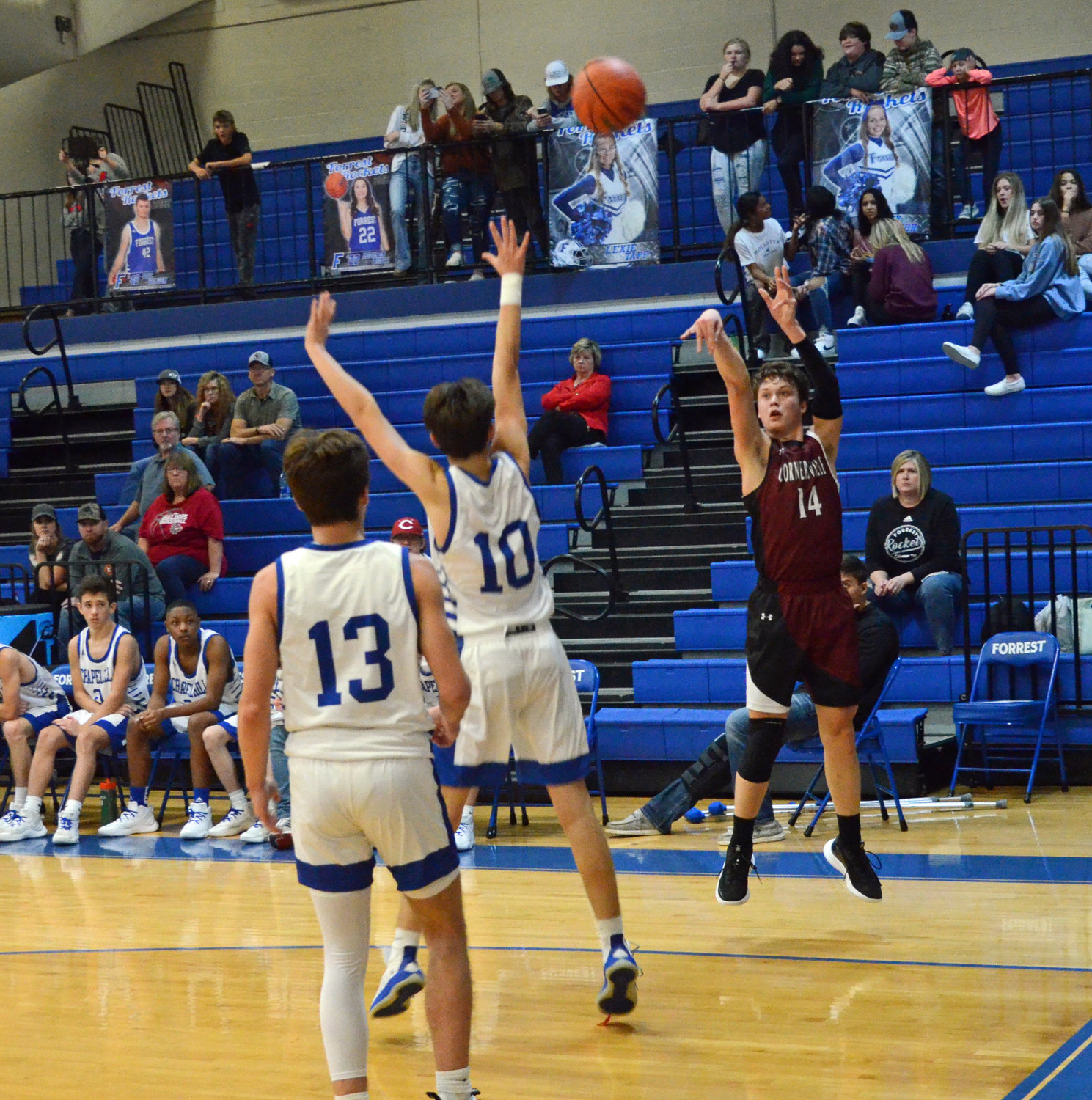 Cornersville’s Bryce Woodard (14) buries one of his two 3-pointers for the Bulldogs, who beat the Rockets 56-45 on opening night at Forrest.
Tribune photos by Anthony S. Puca 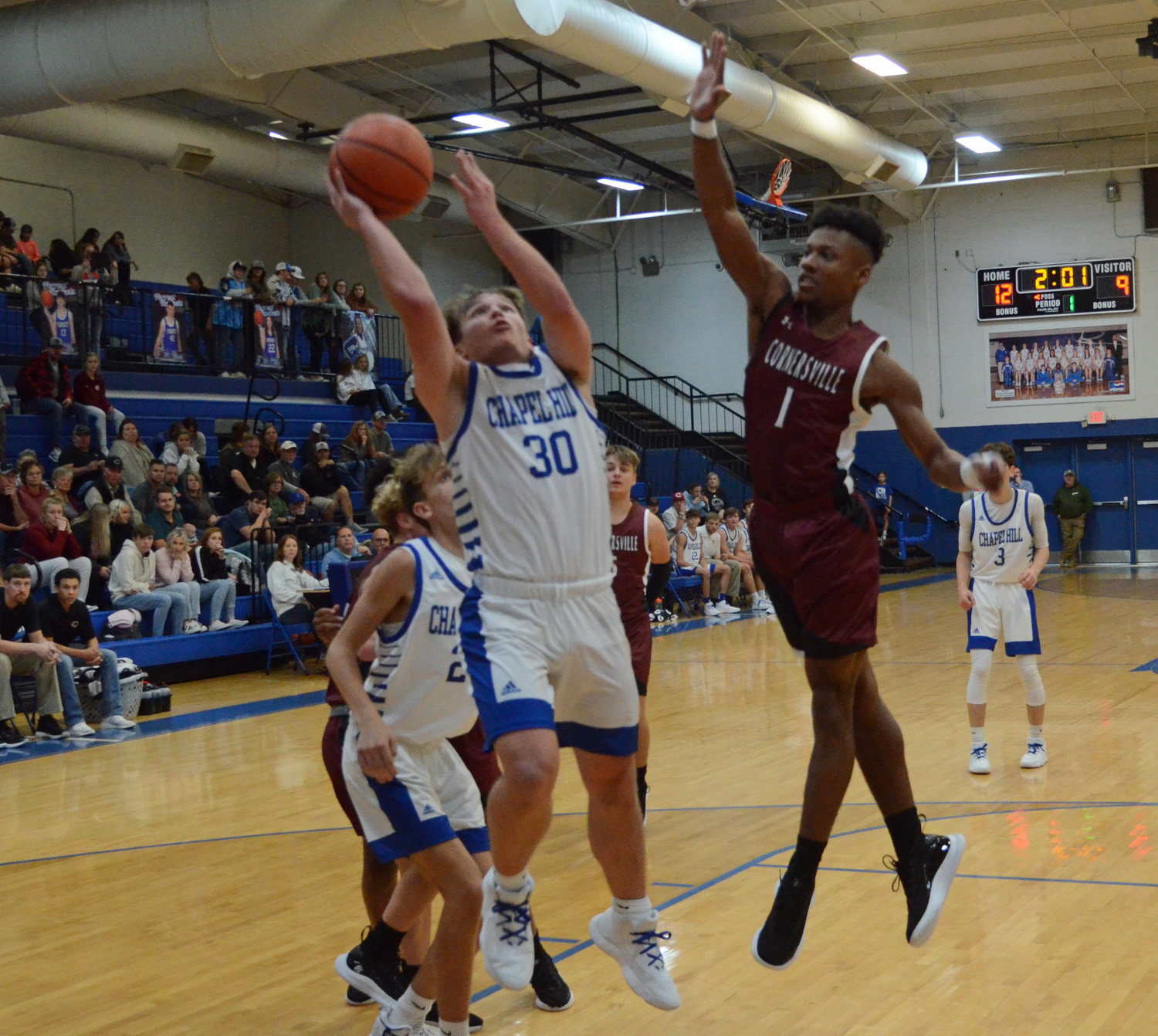 Forrest’s Andrew Timmons (30) takes the rock strong to the hole for two of his game-high 15 points in the contest. 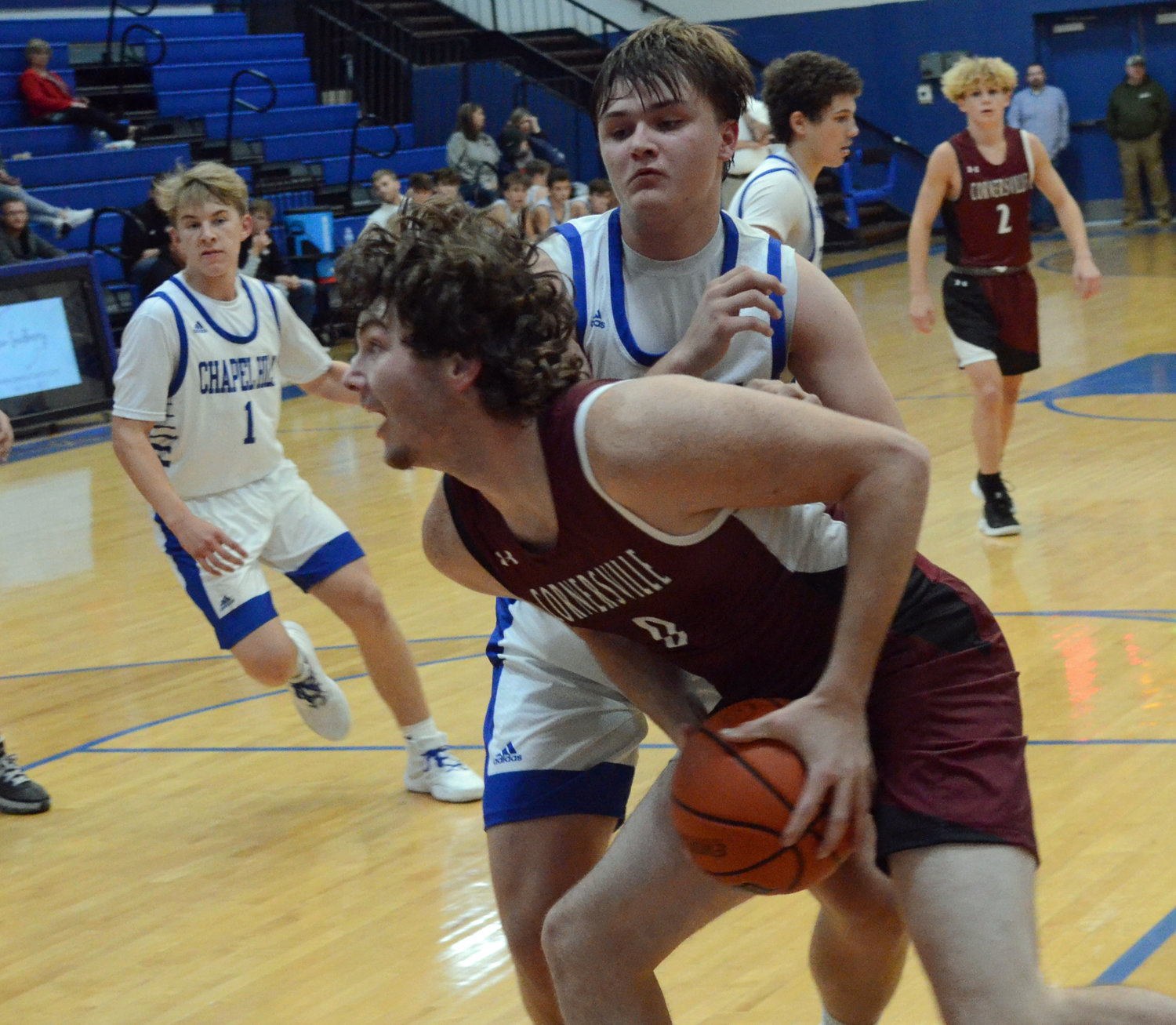 Cornersville’s Eli Welch gets ready to score two of his 11 points in the Bulldogs’ big win over the Rockets. 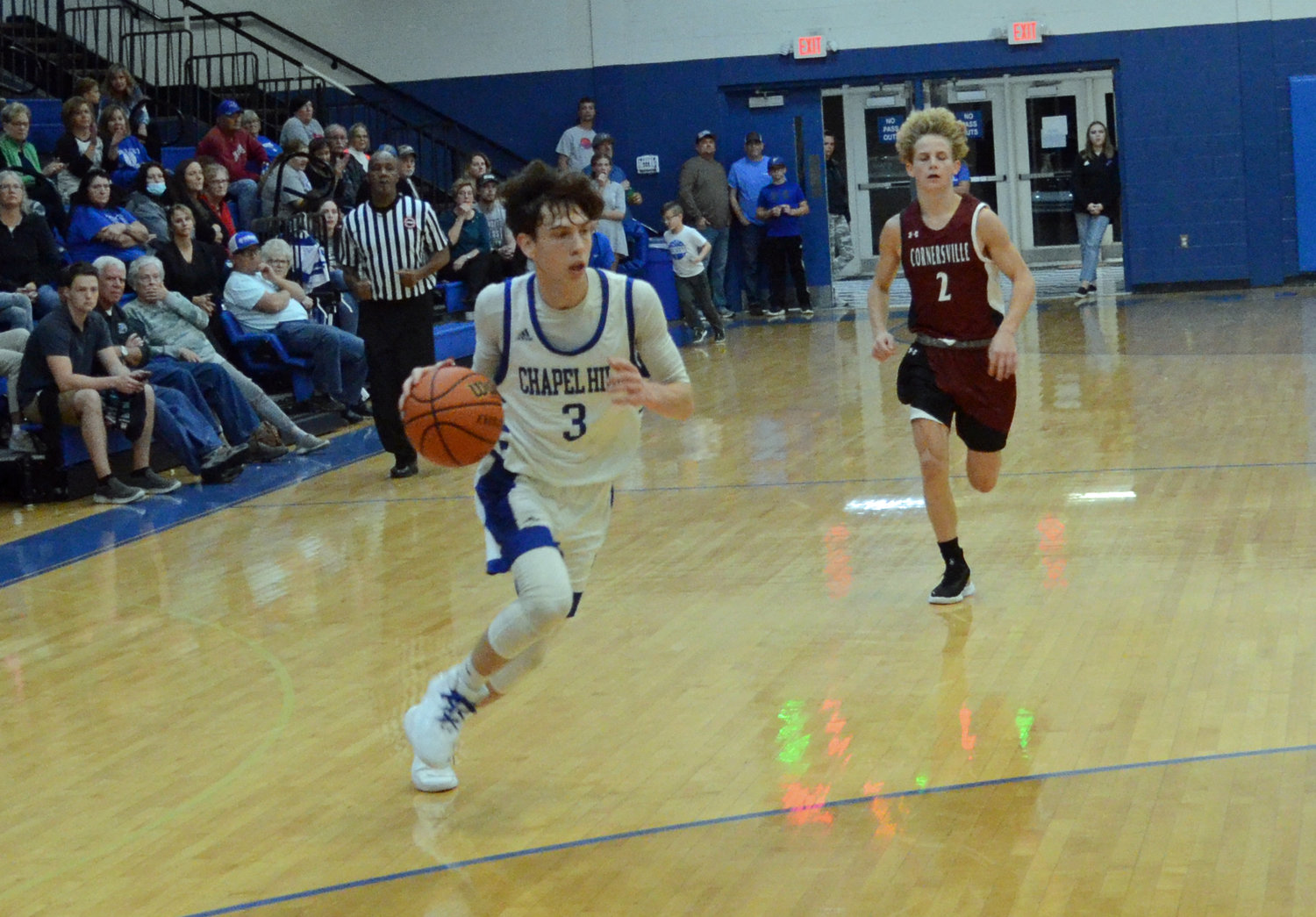 Ben Villazon had eight points for the Rockets, including a pair of 3-pointers.
Previous Next
Posted Wednesday, November 17, 2021 10:32 am

Newton talked about the coaching changes at Forrest with Murrell and Chapman, saying, “I just want the Forrest fans to know how lucky they are to have Chapman and Murrell to run these two programs. They are two great guys who are very good coaches and motivators and the programs are in good hands.””
Cornersville coach Peyton Newton
By Anthony S. Puca Sports Writer

The Forrest Rockets hosted intra-county rival Cornersville for a season opening Hall of Champions contest at Chapel Hill Tuesday night and after taking a one-point halftime lead, the Bulldogs pulled away via a 17-1 third quarter for a 56-45 win.

“We obviously have some things to clean up like turnovers and communication on defense,” Cornersville coach Peyton Newton said. “But man, the grit of these guys with having them for just a day or a day in a half of practice was great and they are a fun group to coach.”

“They didn’t want us to come over here and beat them, I understand that and we knew that,” Newton said. “Confidence-wise we needed to come in here and get the ‘W’ and the guys gutted it out and found a way to win and we are very excited.”

George Lovell led the Bulldogs in the scoring column with 12 points and Eli Welch was also in double figures with 11.

Forrest’s Andrew Timmons led all scorers in the contest with 15 points, including a stellar 7-for-9 effort from the free throw line while Deason Jones had nine points and Ben Villazon had eight points and the Rockets’ only two 3-pointers in the game.

Villazon scored all eight of his points in the first period and Timmons added five points on drives to the rack while Lovell had six points for the Bulldogs, who trailed 17-13 at the end of the first quarter.

Gentry scored on a drive to the hoop to open up the second quarter and Timmons scored on another drive down the lane moments later to give Forrest a 21-13 lead.

Mealer scored on a low post bucket with just under five minutes to play in the first half to maintain the eight-point lead at 23-15 before the Bulldogs went on a 7-0 run behind 3-pointers by Bryce and Blaine Woodard to cut the Forrest lead to one point at 23-22.

Mealer and Lovell exchanged baskets at the end of the first half with Forrest in front 25-24.

Cornersville took it to the Rockets at the start of the second half, beginning with a 6-0 run to seize the lead at 30-25.

One Mealer free throw was a momentary halt to the Cornersville surge as the Bulldogs countered with an 11-0 shutout run to end the third period.

Allen had five points, including a 3-pointer in the balanced Cornersville scoring attack in the stanza as seven Bulldog players scored to put Forrest in a 15-point hole, entering the fourth quarter.

The Bulldogs built their lead to as many as 18 points on an Allen low post bucket before the Rockets found some rhythm and went on an 8-0 run.

Jones scored six points in the surge and Rumley added a basket in the low post to cut the Cornersville lead to 10 points at 45-35.

Forrest kept chipping away and eventually sliced the Cornersville lead to seven points at 48-41 on a Rumley basket with two and half minutes to play in the game before the Bulldogs sealed the win with an 8-4 run that included six free throws down the stretch.

First-year Forrest coach Shane Chapman and the Rockets will get another chance at the Bulldogs when they travel to Frog Bottom on Monday night.

Newton talked about the coaching changes at Forrest with Murrell and Chapman, saying, “I just want the Forrest fans to know how lucky they are to have Chapman and Murrell to run these two programs. They are two great guys who are very good coaches and motivators and the programs are in good hands.”