The nightcap of Tuesday night’s District 9-A matchup featured the Cornersville Bulldogs (10-10 3-4) taking on the visiting Raiders of Moore County (7-8, 3-4).

The Bulldogs looked to avid a … 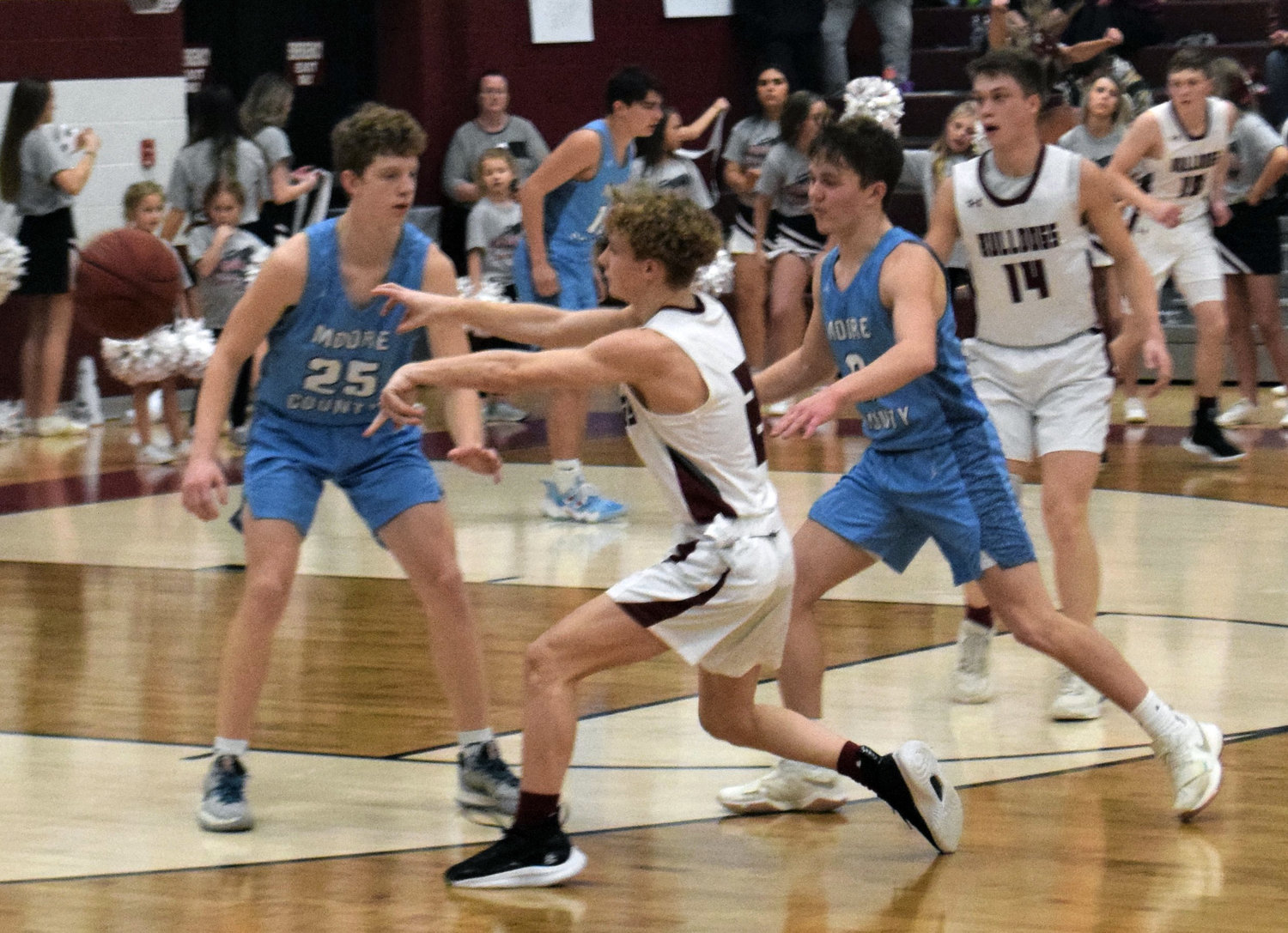 Gage Lovell works the ball to the open man through the Raiders’ defense.
Tribune Photo by Dennis Holley
Posted Thursday, February 10, 2022 11:07 am
By Dennis Holley ~ Sports Writer
The nightcap of Tuesday night’s District 9-A matchup featured the Cornersville Bulldogs (10-10 3-4) taking on the visiting Raiders of Moore County (7-8, 3-4).
The Bulldogs looked to avid a season sweep by the Raiders, as well as improve their district seeding, fought toe-to-toe until late in the game but were forced to foul with time ticking away and fell to the Moore County Raiders, 50-38.
Mason Calahan led three players in double figures with 13 points, while Bryce Woodard scored 11 and Eli Welch chipped in 10.
Alex Copeland for Moore County led all scorers with 22 points.
Welch tipped the ball to point guard Gage Lovell to begin the game then laid in a basket to put the Bulldogs in front, 2-0.
Calahan then drilled a 3-pointer to make the score 5-0.
Moore County responded with Keller Morey sinking a basket and Colton Bateman drilling a 3-pointer to tie the score at 5-5.
Copeland drained a three pointer to put the Raiders in front 8-5.
Woodard from the corner swished a 3-pointer to tie the score at 8-8 with 2:32 left in the first quarter.
Blaine Woodard then drove the right side of the lane for a basket that put the Bulldogs in front 10-8 as the first quarter ended.
Will Harder canned a bucket to start the second quarter and Bateman and Will Baker added baskets as the Raiders led 14-10 with 5:07 left in the half.
Bryce Woodard, one of four seniors on the Bulldog squad then sank back-to-back 3-pointers to put the Bulldogs ahead, 16-14.
Copeland sank a free-throw before Calahan, on a pull-up bank shot made the Bulldog lead three points 18-15.
Harder went to the free-throw line but a lane infraction by the Raiders wiped away the first of two free-throws as the clock wound down to halftime with the Bulldogs leading 18-16.
Moore County missed a last shot to tie the game as the halftime horn sounded.
The third quarter began with Welch scoring two baskets down low for the Bulldogs.
The Raiders responded with baskets by Copeland and Harder to make the score 22-20.
At the 4:05 mark of the quarter Copeland was fouled and went to the line and sank two free-throws to tie the game at 22-22.
Both teams swapped baskets for baskets with Khi Canty and Bryce Woodard scoring for Cornersville and two baskets by Harder to make the score 26-26.
Then a 3-pointer by Copeland turned the game to Moore County as they now led 29-26.
Baskets by Bryce Woodard and Calahan put the Dogs back in front 30-29.
Copeland answered with another 3-pointer and at the end of the third quarter Moore County led, 32-30.
Welch banked home a basket and Calahan made one of two free-throws to make the score Cornersville leading 33-32 with 7:09 left in the game.
A free-throw by Keller Morey and then Copeland would strike again with another 3-pointer to push the Raider lead to four points, 37-33.
From there on until the end of the game it seemed as if a lid was placed over the Bulldogs basket as shot after shot rolled over, bounced off and rimmed out.
With baskets not falling Moore County began to control the ball and the Bulldogs were forced to foul.
Free throws by Moore County began falling through the net and by the time the horn sounded to end the game the Raiders had stretched their lead to 12 points and came away with a 50-38 victory.
The Bulldogs travel to Culleoka Friday night for the season finale.
The Bulldogs start tournament play next week in Lynchburg.
Moore County   8 8 14 20 — 50
Cornersville     10 8 12   8 — 38
Moore County (50): Alex Copeland 22, Keller Morey 9, Will Harder 8, Colton Bateman 7, Will Baker 4.
Free Throws: (11-15) Morey 5-of-6, Copeland 2-for-2, Baker 2-of-2, Harder 2-for-4, Bateman 0-for-1.
Three-point Baskets: (4) Copeland.
Cornersville (38): Mason Calahan 13, Bryce Woodard 11, Eli Welch 10, Blaine Woodard 2, Khi Canty 2.
Free Throws: (1of 6) Calahan 1-for-2, Welch 0-for-2, Kale Adcox 0-for-2.
Three-point Baskets: (5) Bryce Woodard 3, Calahan 2.
Halftime Score: Cornersville 18, Moore County 16.