CHAPEL HILL — It was certainly no offensive masterpiece by either Cornersville or Forrest in the Battle of North and South in Marshall County on Friday night, but in the end, the Bulldogs were … 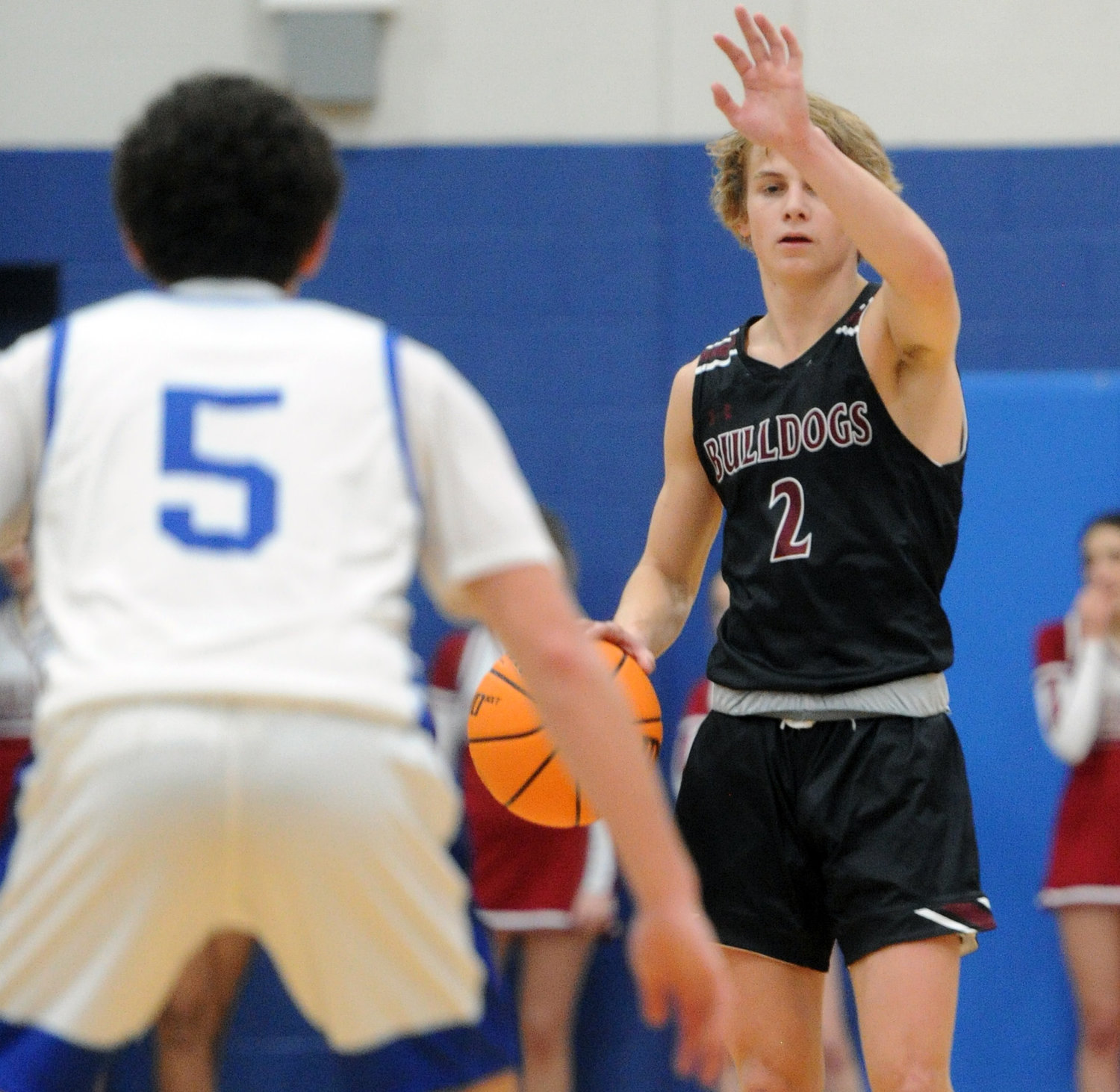 Gage Lovell sets up the Bulldogs' offense in the halfcourt against Forrest on Friday night.
Tribune Photo by Chris Siers 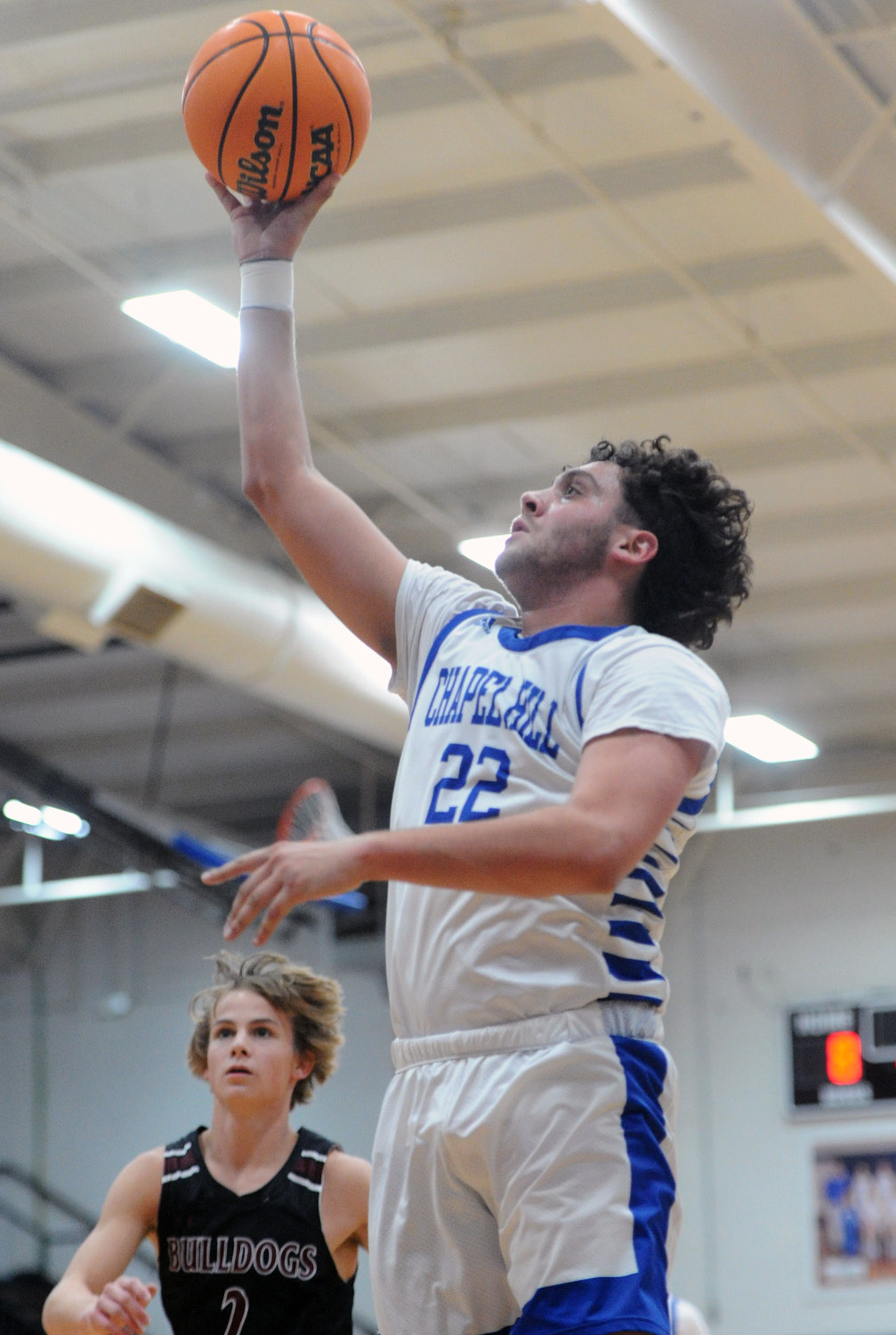 Davin Porter powers his way to the rim and goes up for two for Forrest.
Tribune Photo by Chris Siers 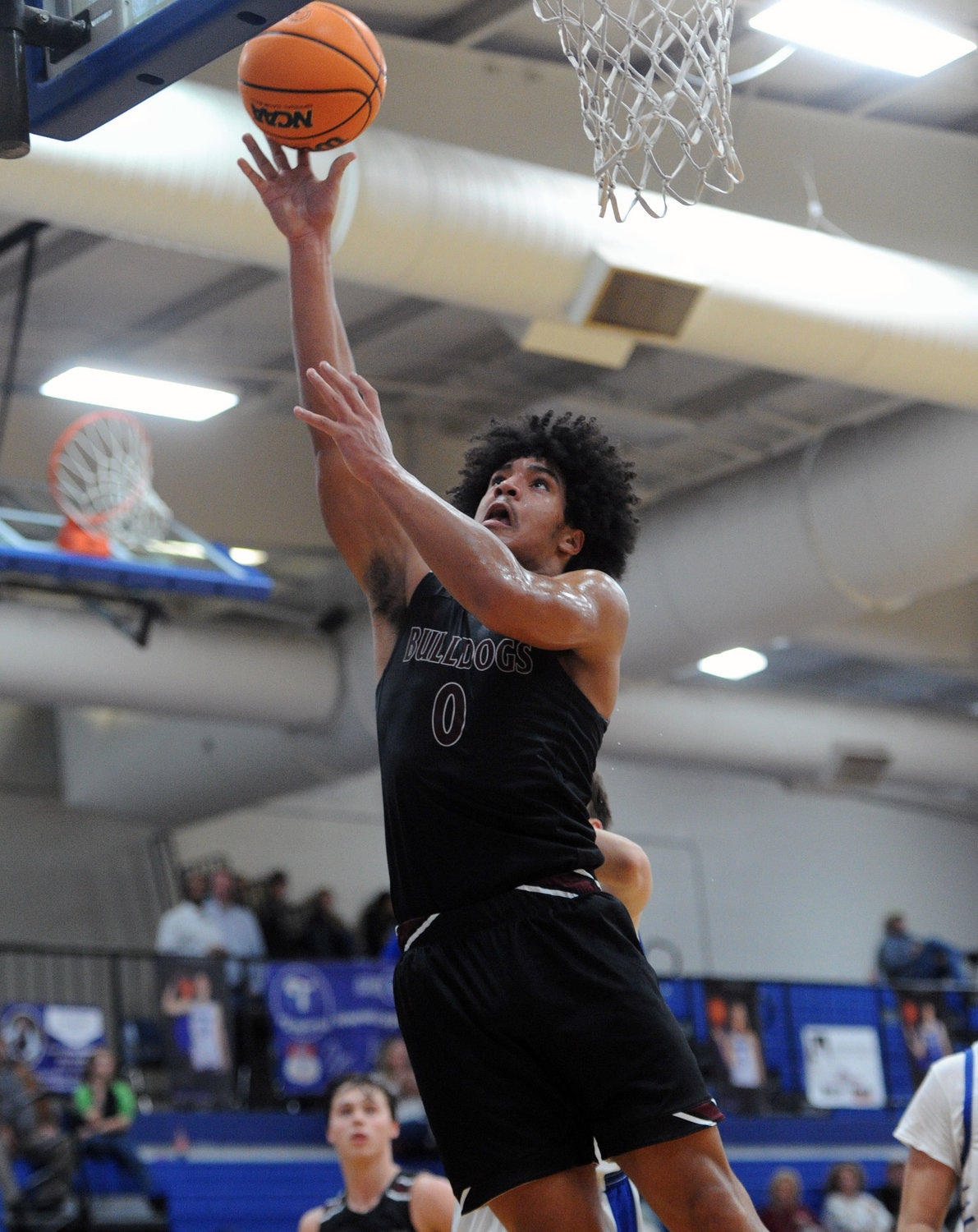 Ben Franklin goes up strong after hauling in a rebound for Cornersville.
Tribune Photo by Chris Siers 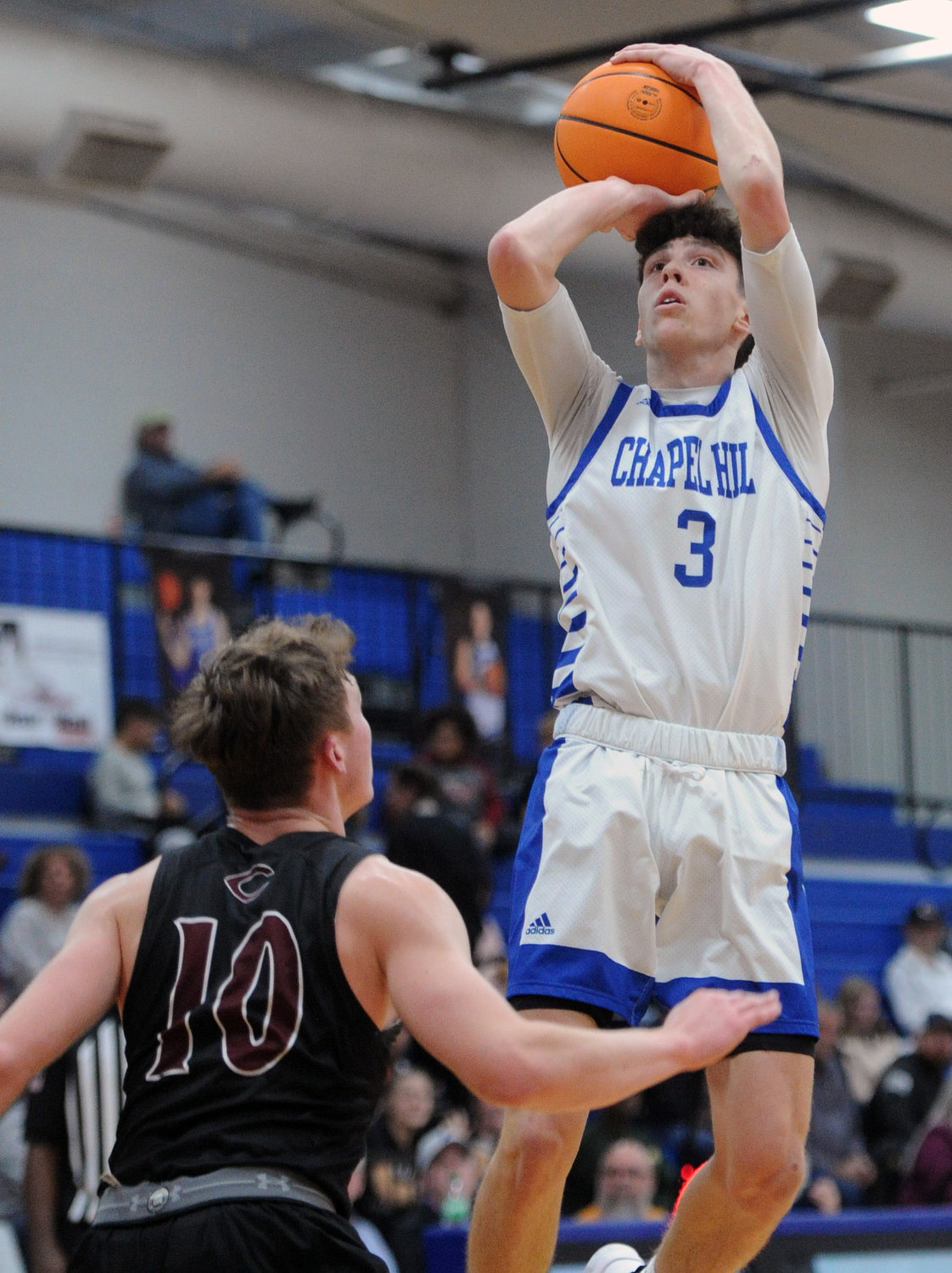 Ben Villazon pulls up for a mid-range jumper for the Rockets.
Tribune Photo by Chris Siers 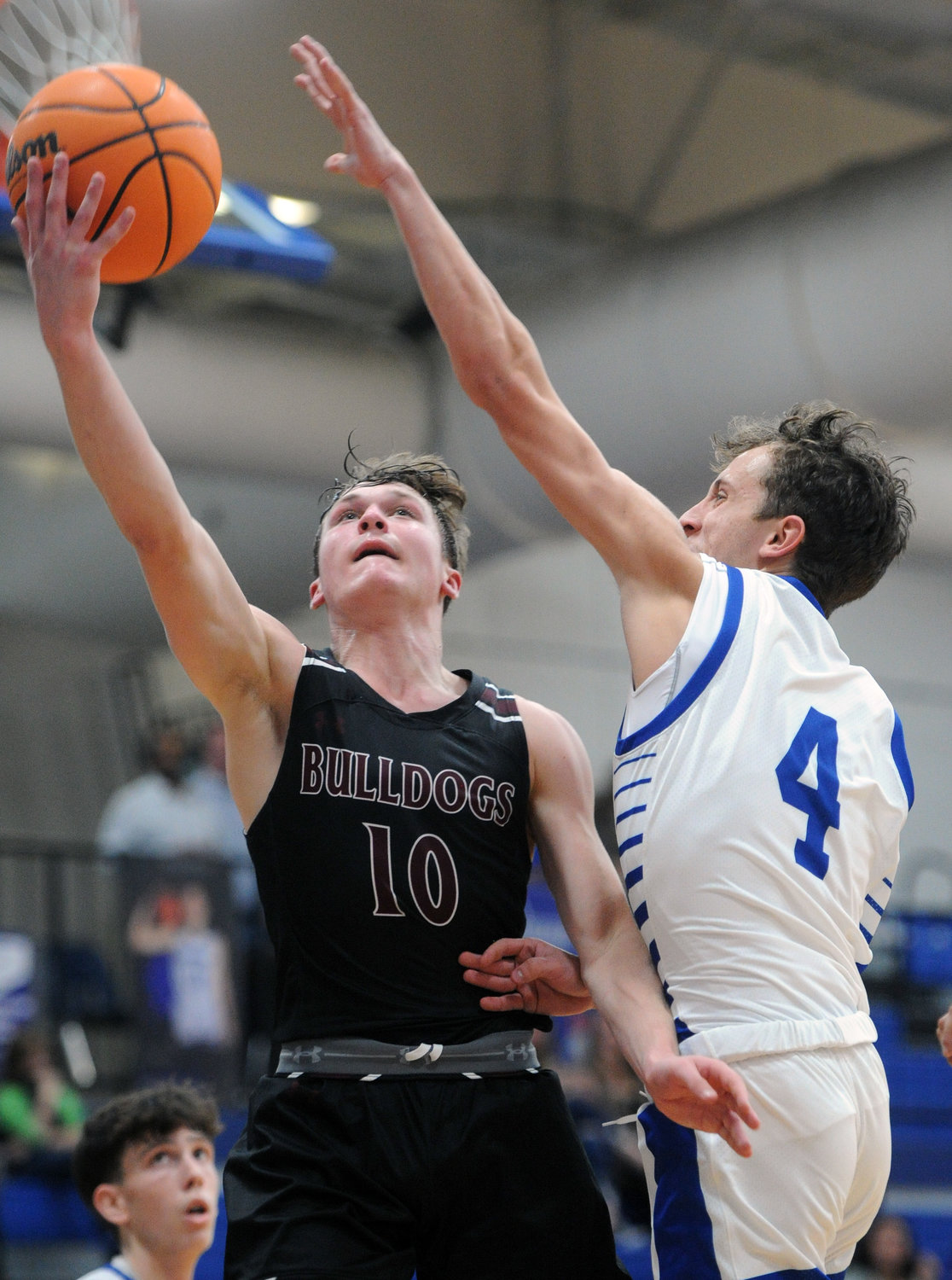 Blaine Woodard flies to the rim and goes up for a layup.
Tribune Photo by Chris Siers 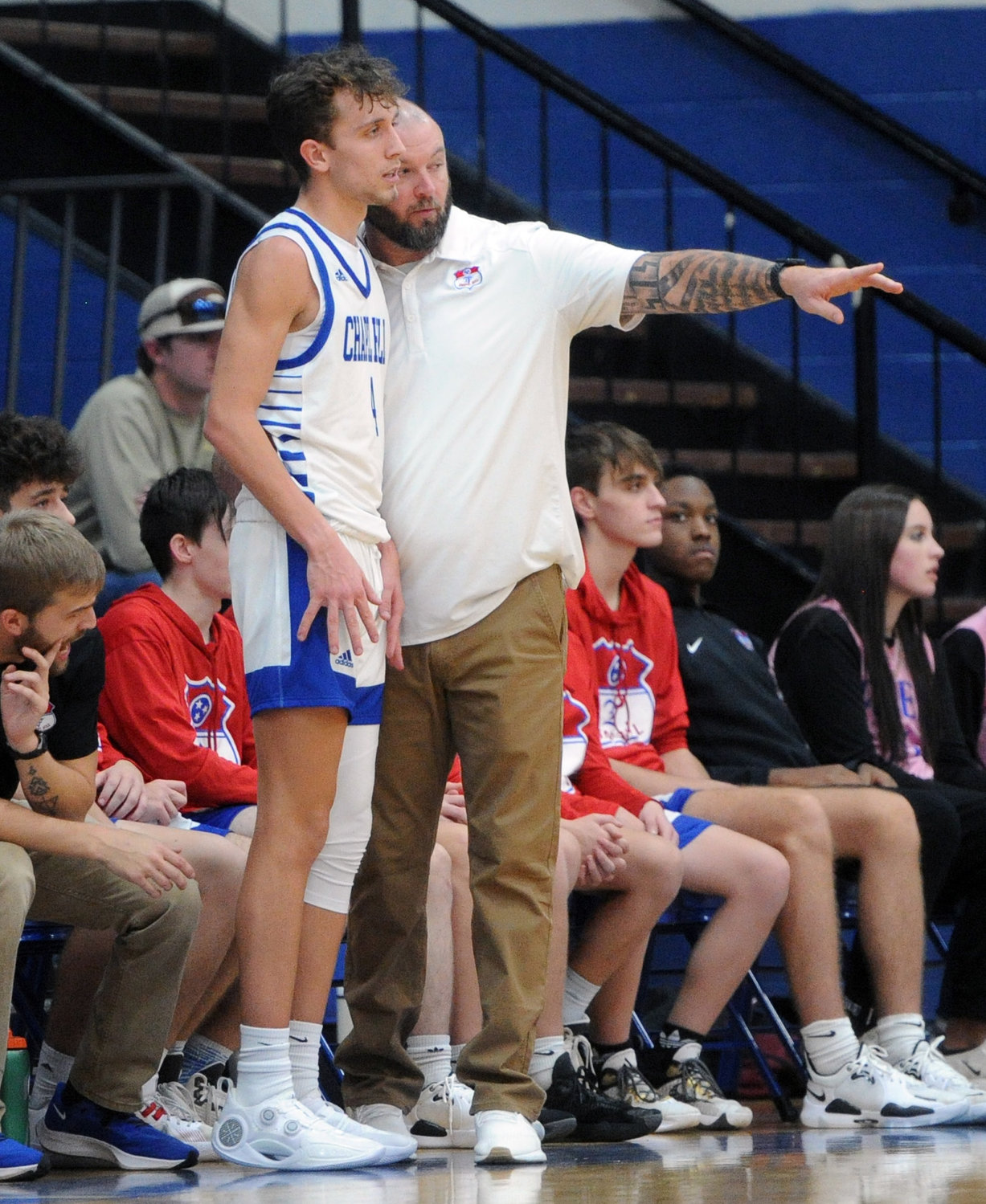 CHAPEL HILL — It was certainly no offensive masterpiece by either Cornersville or Forrest in the Battle of North and South in Marshall County on Friday night, but in the end, the Bulldogs were able to withstand several momentum shifts and make key baskets in the final minutes to escape Chapel Hill with a 34-32 win over the Rockets.
“It was a defensive battle for sure. My kid didn’t quit and they kept fighting. I told them in the locker room, I’m proud of the fact when we gave up a lead, they (Forrest) got it late, but we came back and fought hard and never quit. That’s what makes me the most proud tonight,” Bulldog coach Dakota Brown said.
The two squads locked the score three times in the fourth quarter before Mason Harper hit a pair of free throws with 1:47 left to give the Rockets a 32-31 lead.
That lead didn’t hold long as Carter Neat drew a foul with 57 seconds left on the clock and hit both attempts of a one-and-one try to put Cornersville back up, 33-32.
After Forrest missed the front end of a one-and-one attempt with 30 seconds to go, Cornersville’s Hayden Grover hauled in a rebound off a Rocket miss and was fouled, once again earning a trip to the free throw line.
After missing the front end of the double bonus attempt, Grover hit the second shot to make it a two-point game.
That score held as the Rockets couldn’t come up with the needed shot in the clutch and the Bulldogs escaped with the two-point win.
“Kudos to Cornersville. They had a good game plan against us. The 1-3-1 gave us trouble and we shot the ball in the corner just like they wanted us to do. Our guys didn’t make shots down the stretch and their guys did,” Rocket coach Shane Chapman said.
It was never an offensive masterpiece by either squad, but both did have their moments at various points in the game.
Davin Porter helped the Rockets build a 21-16 lead, scoring all 12 of his points in the first half, including three triples for the Rocket big man.
“He (Porter) is a heck of a ball player. Tonight, I feel like we did a better job defending him. He’s such a hard guard because he can get off the dribble and make the long shot,” Brown said.
Between working in the paint and being able to hit shots from the perimeter, Porter is often the powderkeg that can spark the Rocket offense, Chapman said.
“When we can get stuff going with Davin, the rest of the team usually follows. We had some guys that didn’t shoot it like they normally do,” Chapman said.
While the Rockets built a five-point lead by halftime, offense became an all-out struggle for Forrest in the second half, particularly in the third quarter.
After a three-pointer brought the Bulldogs within one possession at the 5:46 mark of the third, it was Ben Franklin who went to work in the paint and helped Cornersville rally for a 25-23 lead by the end of the third.
“He (Franklin) is one of those guys who is going to crash the boards and go hard, but I feel like tonight he was able to make some moves and score some easy layups,” Brown said.
Franklin went on to hit double figures and score 10 points, as well as lead the Bulldogs off the glass.
Hayden Grover also hit double figures for Cornersville as he led the Bulldogs with 11 points.
For Chapman and the Rockets, the challenge is to provide more consistency in the paint.
“We’ve got to execute better. We’ve got to put the ball in the hole tonight when we’re inside two and three feet,” he said.
The Rockets are back on their home court on Tuesday night, hosting Fayetteville City at 7:30 p.m.