On a beautiful late summer evening the Cornersville Bulldogs (1-3, 1-0 Region 5-1A), needing to keep their Region 5 record spotless, made the long trip to southern Wayne County to face the Collinwood … 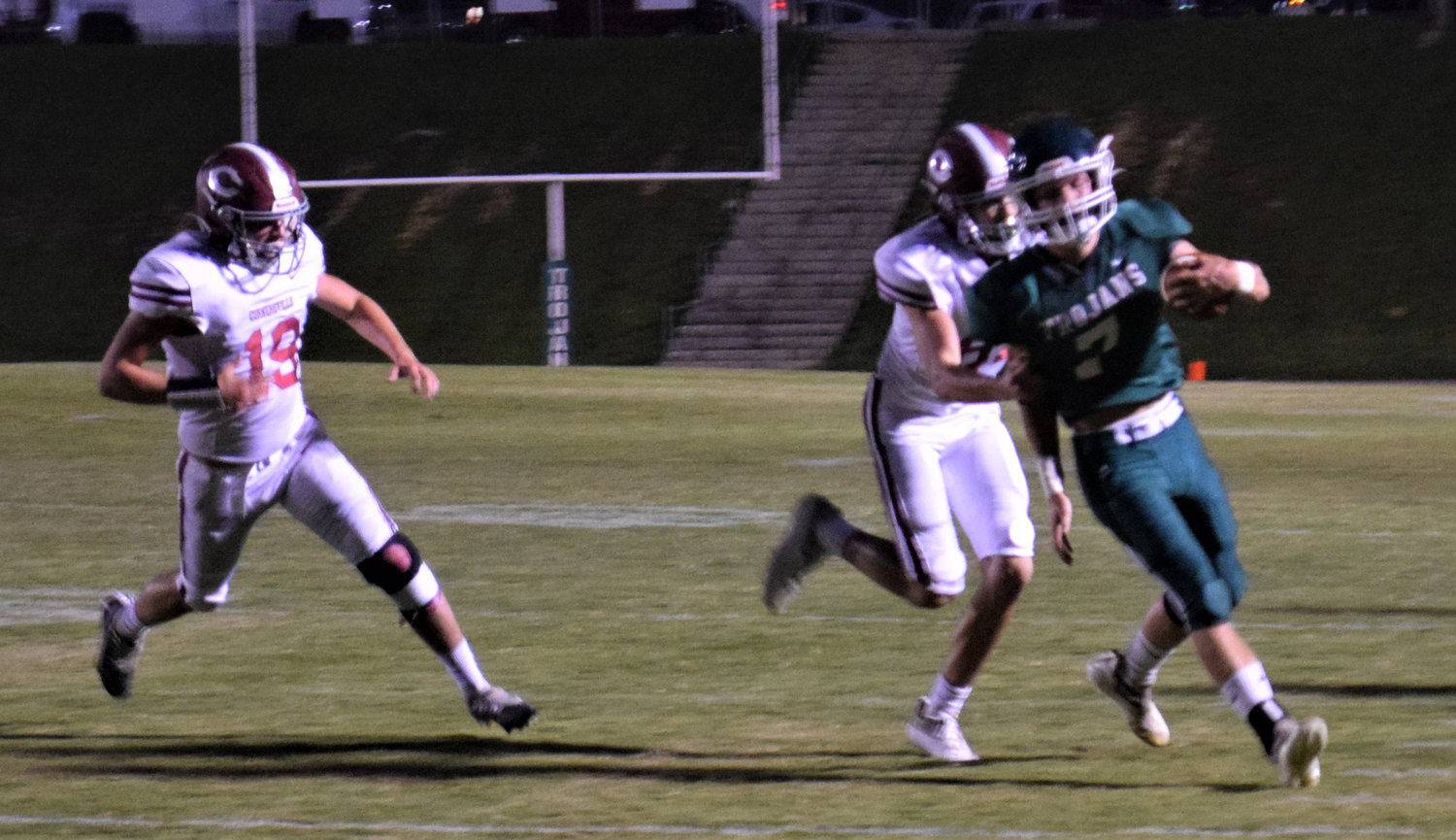 Blaine Woodard (9) and Blake Estes (19) on the prowl for the Bulldogs.
Tribune photos by Dennis Holley 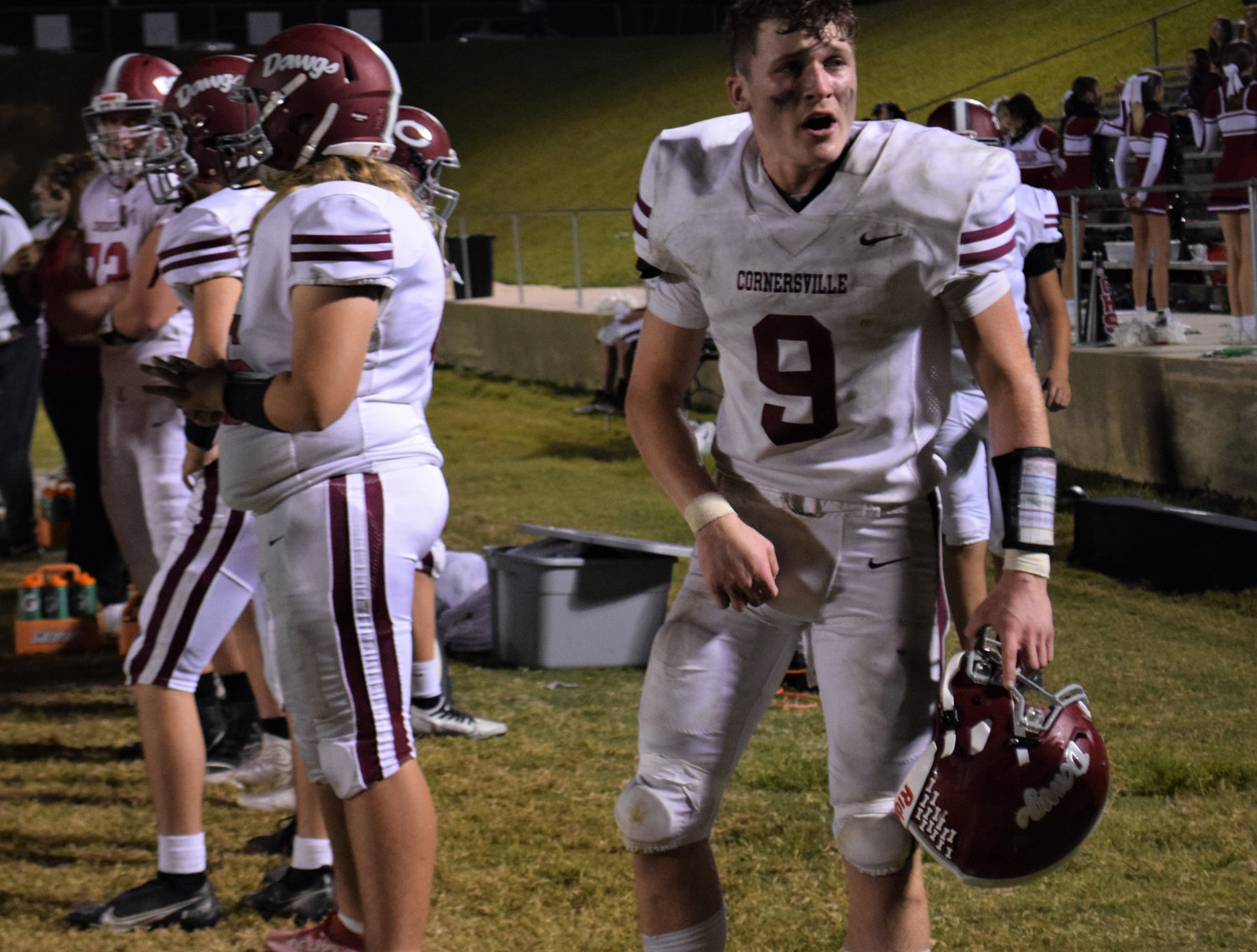 Cornersville’s Blaine Woodard (9) takes a break during the game. 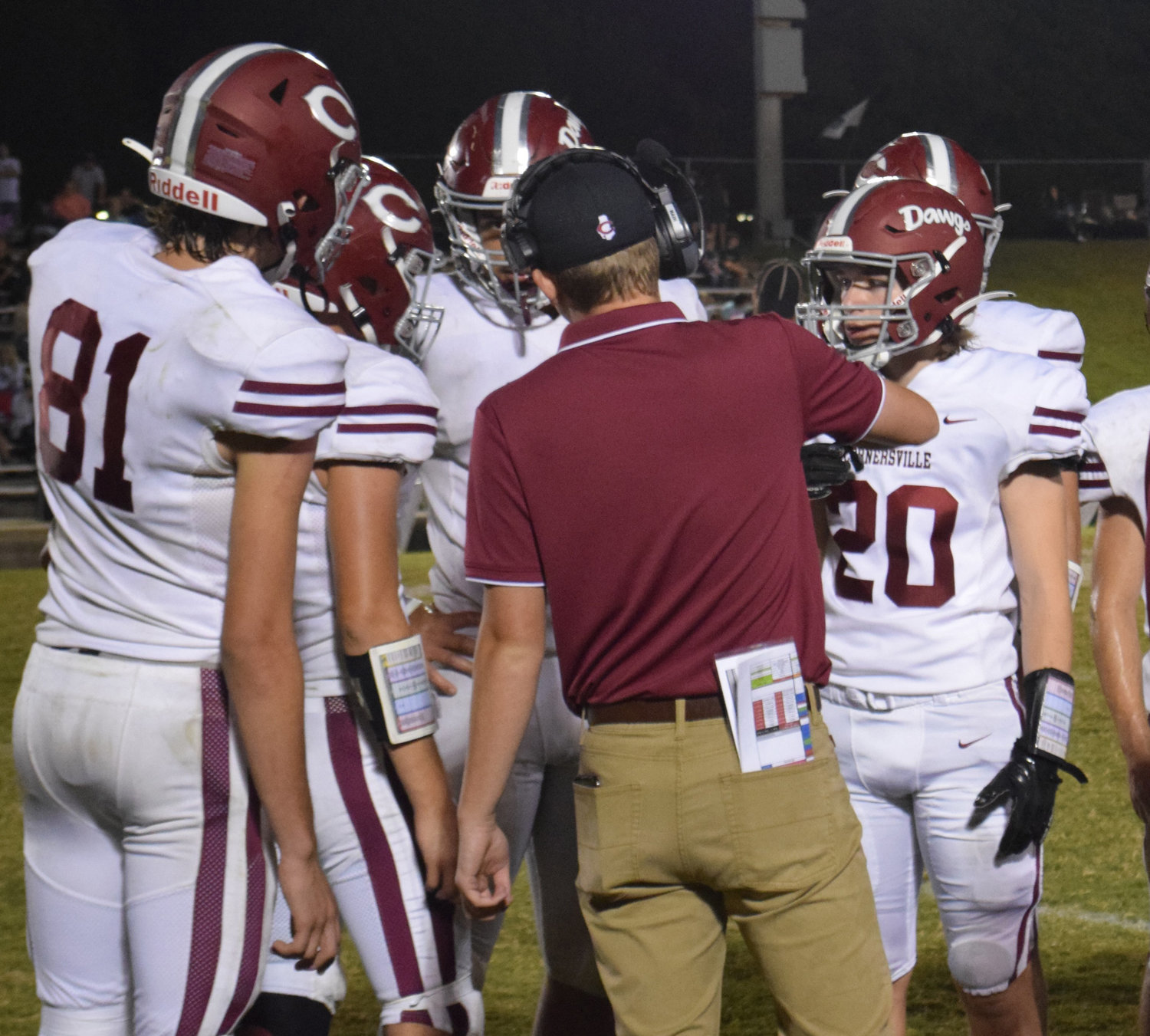 Bulldog offensive coordinator Henley Mitchell sets up a play.
Previous Next
Posted Wednesday, September 21, 2022 4:00 pm
By Dennis Holley - Sports Writer
On a beautiful late summer evening the Cornersville Bulldogs (1-3, 1-0 Region 5-1A), needing to keep their Region 5 record spotless, made the long trip to southern Wayne County to face the Collinwood Trojans (0-3, 0-0 Region 5-1A).
Coach Shelby Waddell’s Bulldogs built a 20-0 halftime lead, then had to fight tooth and nail as the hometown Trojans came out in the third quarter with flames in their eyes, pulling to within a touchdown and extra point of taking the lead. The Bulldog defense hunkered down, swatted down and beat back Collinwood’s attempt to come back and in the end, the Bulldogs left the sunken bowl field with a 20-14 win.
Cornersville junior Ben Franklin led the Bulldogs offensively with three touchdown runs, but Franklin’s defensive play along with Mason Calahan, Riley Qualls, Blaine Woodard, Blake Estes, and Beau Schileg led the way with their backs against the wall. Despite the hometown crowd urging Collinwood on, the Bulldogs stopped the Trojans in a hard-fought slobber knocker fourth quarter.
As is the case when these teams meet, penalty flags flew often on both sides.
“Hats off to our kids, with the adversity we faced in the second half, we found a way, we played the next play, and I am so proud of them for that,” Coach Shelby Waddell said. “We have a lot of kids with a lot of heart and a lot of pride in Cornersville. We had some kids that stood up, we found a way and that’s what good teams do, and it was on display tonight. Our defense stood the test. I am so proud of them.”
The Collinwood eleven won the coin toss and deferred to the second half, so the Trojans kicked off to the Bulldogs and after a nice return by Austin Cooper, Cornersville began play at the Collinwood 49-yard line.
Qualls rambled for eight yards and Franklin ran for a first down to the Trojan 39-yard line.
Franklin then burst through the Collinwood line and raced to the end zone for the touchdown, but a holding call negated the score.
Calahan then rushed for 8 yards and. on the next play. Franklin got loose. This time, no flag littered the field and when Joseth Plama’s extra point split the uprights, the Bulldogs led 7-0 with 10:08 left in the first quarter.
Collinwood then went on a long drive, stymied by penalty flags, and boosted by hard knock running with quarterback Fletcher Thompson and running back Nick Sanderson supplying the energy.
The drive fizzled at the Bulldog 25-yard line as Thompson coughed up the ball and a host of Bulldogs pounced on the loose pigskin.
The Bulldogs maintained possession and a 7-0 lead as the first quarter.
Cornersville began the second quarter pounding the ball with Calahan, Qualls, and Franklin, who broke loose off the left side and ran for a 38-yard touchdown. Plama split the uprights with 9:32 left in the first half, Cornersville now led 14-0.
The Cornersville defense was led in the first half by a sack and steady pressure by defensive lineman senior David Metcalf.
The Bulldogs would again strike paydirt after a Trojan turnover on downs and a 29-yard run by Franklin, who on a wide pitch from quarterback Woodard ran untouched into the end zone from the four-yard line. This time the PAT was wide right and with 2 seconds left in the first half Cornersville led 20-0.
The second half began with Collinwood receiving the ball and on first down Thompson found wide-out Cayden Lee on a 38-yard pass play down the right sideline.
Khi Canty and Qualls saved the touchdown for the Bulldogs but on second down Blake Whitten for the Trojans scampered through the line for a 10-yard touchdown and Whitten added the PAT with less than two minutes gone in the third quarter, cutting the Cornersville lead to 20-7.
Cornersville received the ball and on first down from their own 22-yard line Franklin found daylight and outran the entire Trojan defense for a 78-yard touchdown, but a holding penalty negated the score.
The Bulldogs could not muster a first down and punted to the Trojans who promptly moved downfield and climaxed the drive with a 13-yard touchdown run by Nick Sanderson. Whitten again booting the PAT with 6:37 left in the third quarter and the Trojans were within 20-14.
By the fourth quarter, tempers flared and penalty flags flew as almost every play was hampered by a flag.
Collinwood, with possession and the clock running, knocked at the Cornersville door but an unsportsmanlike penalty pushed them back to the Bulldog 22-yard line.
The Cornersville defense just may have taken a big step together as they bent but didn’t break, played tough on a hostile field, and withstood numerous penalties to bring home a “W.”
Bulldog defenders Metcalf, who got a couple of more sacks, Woodard, Qualls, Calahan, Schilig, and Franklin showed their ability on defense that can only aid Cornersville as the second half of the season begins.
The Bulldogs entertain the Eagleville Eagles on a Homecoming Friday night in another important Region 5 contest.
Cornersville                   7   13    0   0   -  20
Collinwood                     0     0     14   0  -  14
Scoring:
1st Quarter
CV – Ben Franklin 32-yard rush; Joseth Plama PAT – Good
2nd Quarter
CV – Ben Franklin 38-yard rush; Joseth Plama PAT – Good
CV – Ben Franklin 3-yard rush; PAT – No-Good
3rd Quarter:
CW – Blake Whitten 10-yard rush; Whitten PAT kick - Good.
CW – Nick Sanderson 13-yard rush, Whitten PAT kick- Good