LAWRENCEBURG — Following the off week, the Marshall County Tigers picked up right where they left off at the mid-way point of the season, steamrolling Lawrence County, 32-0, on Thursday … 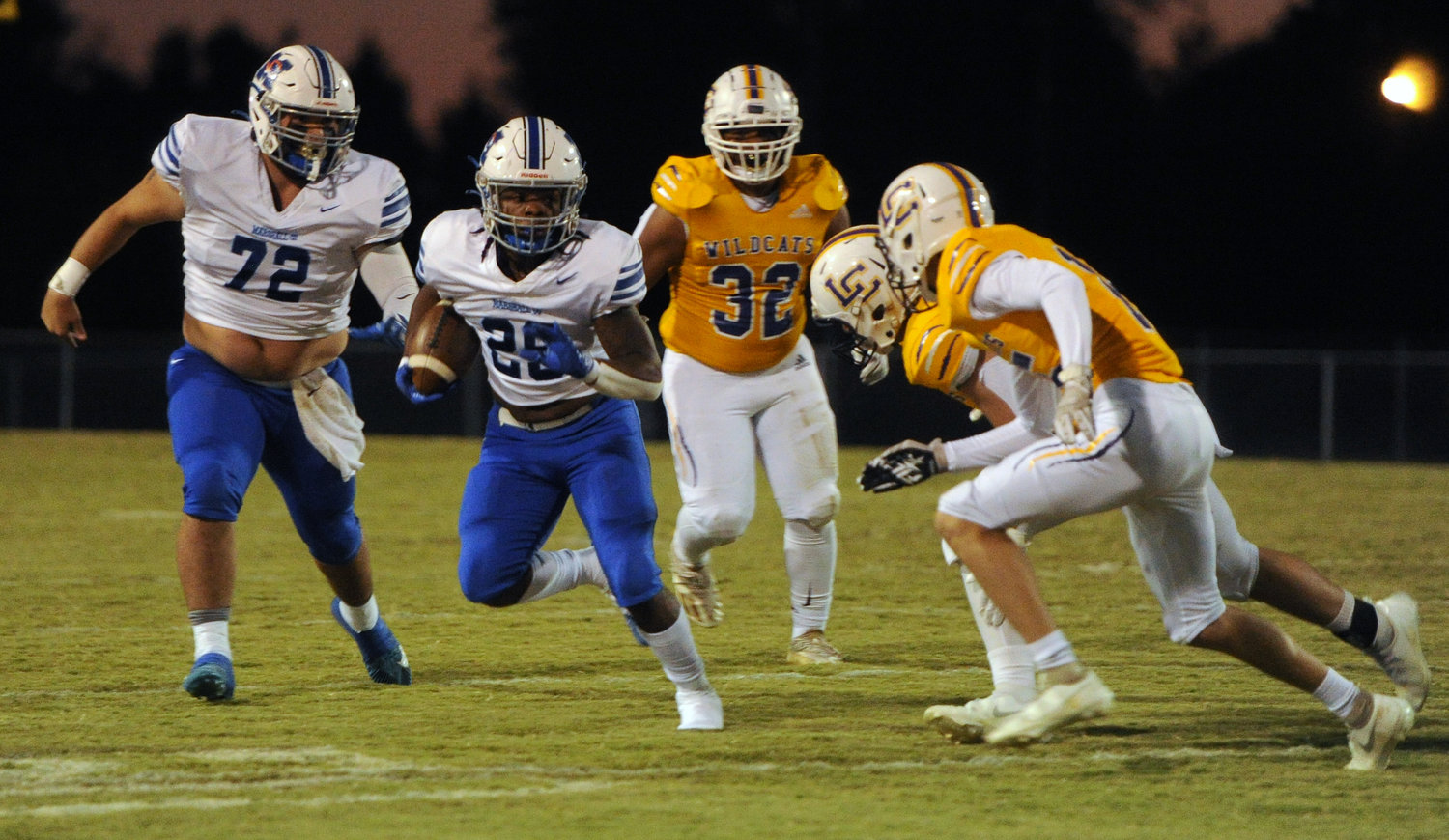 Demari Braden ran for 63 yards and a pair of touchdowns against Lawrence County on Thursday night.
Tribune Photo by Chris Siers 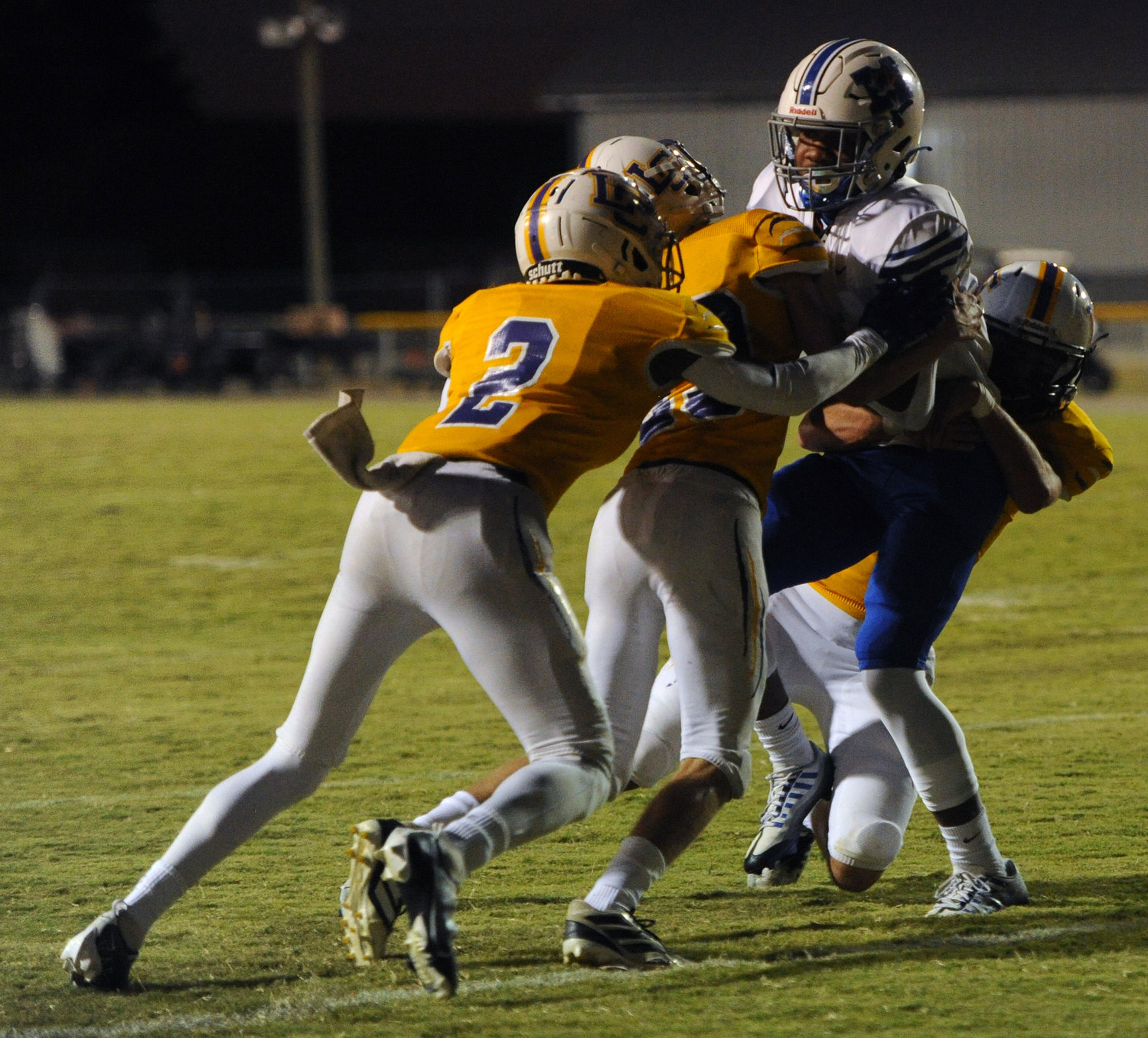 Jayden Randolph drags several Wildcat defenders into the end zone as he scores the game’s first touchdown on an 11-yard pass from quarterback Silas Teat.
Tribune Photo by Chris Siers 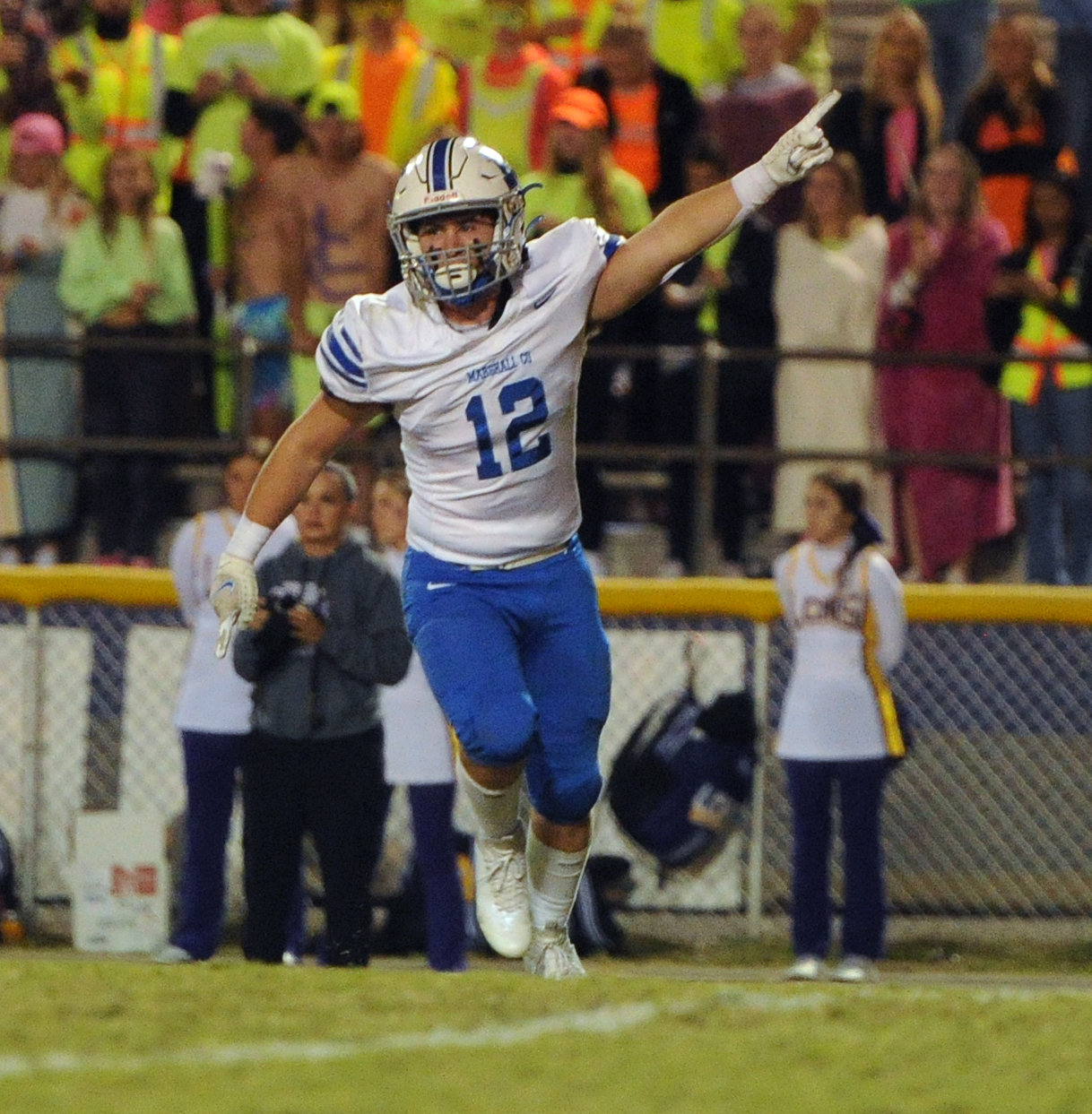 LAWRENCEBURG — Following the off week, the Marshall County Tigers picked up right where they left off at the mid-way point of the season, steamrolling Lawrence County, 32-0, on Thursday night.
Junior quarterback Silas Teat threw two touchdown passes and senior Demari Braden made a triumphant return from an ankle injury with a pair of rushing touchdowns as well.
The Tigers came out of the gate featuring Braden on six of the first eight plays on offense.
“Definitely excited about getting Demari back going. I think he is back to 100% after being hampered the last month. He is no doubt crucial to the success of our team the rest of the way,” Tiger coach Thomas Osteen said.
Braden carried the ball nine times for 63 yards and two, four-yard rushing touchdowns.
In total, the Tigers mustered up just 108 yards on the ground, but worked with short fields due to Wildcat turnovers and excellent starting field position.
Teat went to the air and connected with Jayden Randolph for the game’s first score, before Braden bumped the Tiger advantage to 14-0 by the end of the first quarter.
Lawrence County did manage to gain some traction early in the second quarter, but the Marshall County defense backed the Wildcats up to their own end zone and a snap over the punter’s head resulted in a safety for the Tigers.
Braden capped the following drive with his second score of the night, giving Marshall County a 22-0 lead.
“Our defense really played well tonight. We gave up a little yardage between the 20’s at various points but we bowed our backs every time it counted. It speaks volumes to shoutout a team like that that’s so talented running the ball,” Osteen said.
The Tigers notched one final touchdown of the half—a three-yard pass from Teat to sophomore Aja Jones to give Marshall County a 29-0 lead at the half.
In the second half, the Tigers were able to work the reserves from the bench onto the field and the only points of the half came off the toe of Wyatt Joyce on a 32-yard field goal.
He was also 4-for-4 on extra points for the Tigers.
In total, Teat connected on 12-of-18 passing attempts for 125 yards and two
touchdowns.
“Silas is in great command of our offense. He has done a really nice job being efficient all year. He has been like a point guard getting the ball to multiple people every night,” Osteen said.
Antomme Cowthorn and Randolph each hauled in a pair of passes, while Jones had five grabs for 24 yards.
Defensively, the Tigers were led by Jakavan Curry, who totaled 15 total tackles and a tackle for loss, while Darian Crenshaw added 11 tackles as well.
Thursday night’s win sets up a huge, top-10 match up for the Tigers with another road challenge on deck.
On Thursday, the Tigers will travel to face No. 6 ranked Pearl Cohn, who also sits unbeaten in Region 5-AAAA.
Pearl Cohn enters Thursday’s matchup after crushing Glencliff, 77-0, last week.
Marshall County has been good on the defensive side of the ball, allowing just 10.3 points per game.
That defense will be tested against the Firebirds’ offense that’s averaging 41.4 points per game.
“Obviously huge challenge this coming week at Pearl. They are no doubt one of the most talented teams in the state. I know our kids are excited about the opportunity and have earned the right to play in a big game of this magnitude this late in the year,” Osteen said.
Kickoff is set for 7 p.m. on Thursday night at Pearl Cohn.