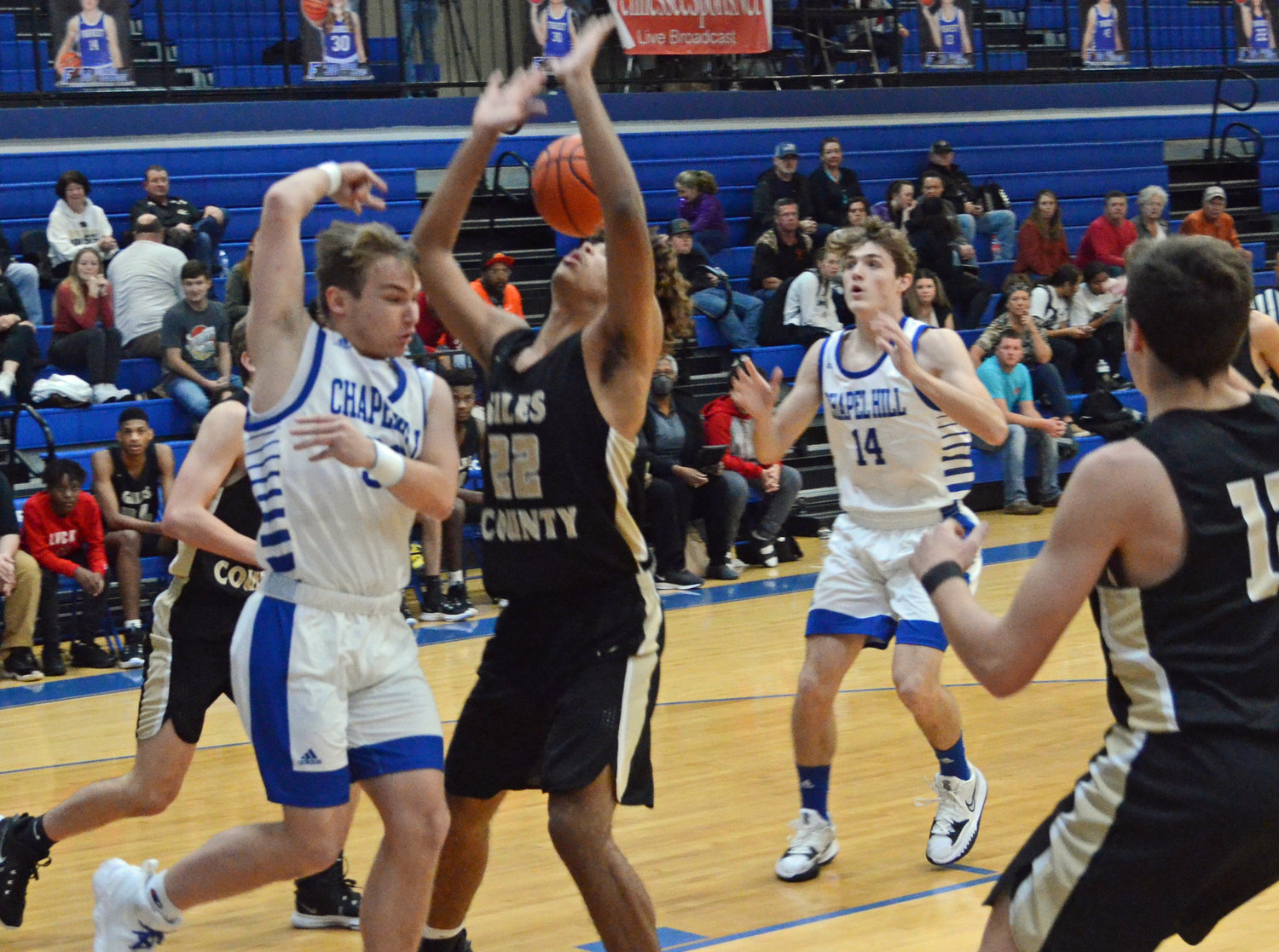 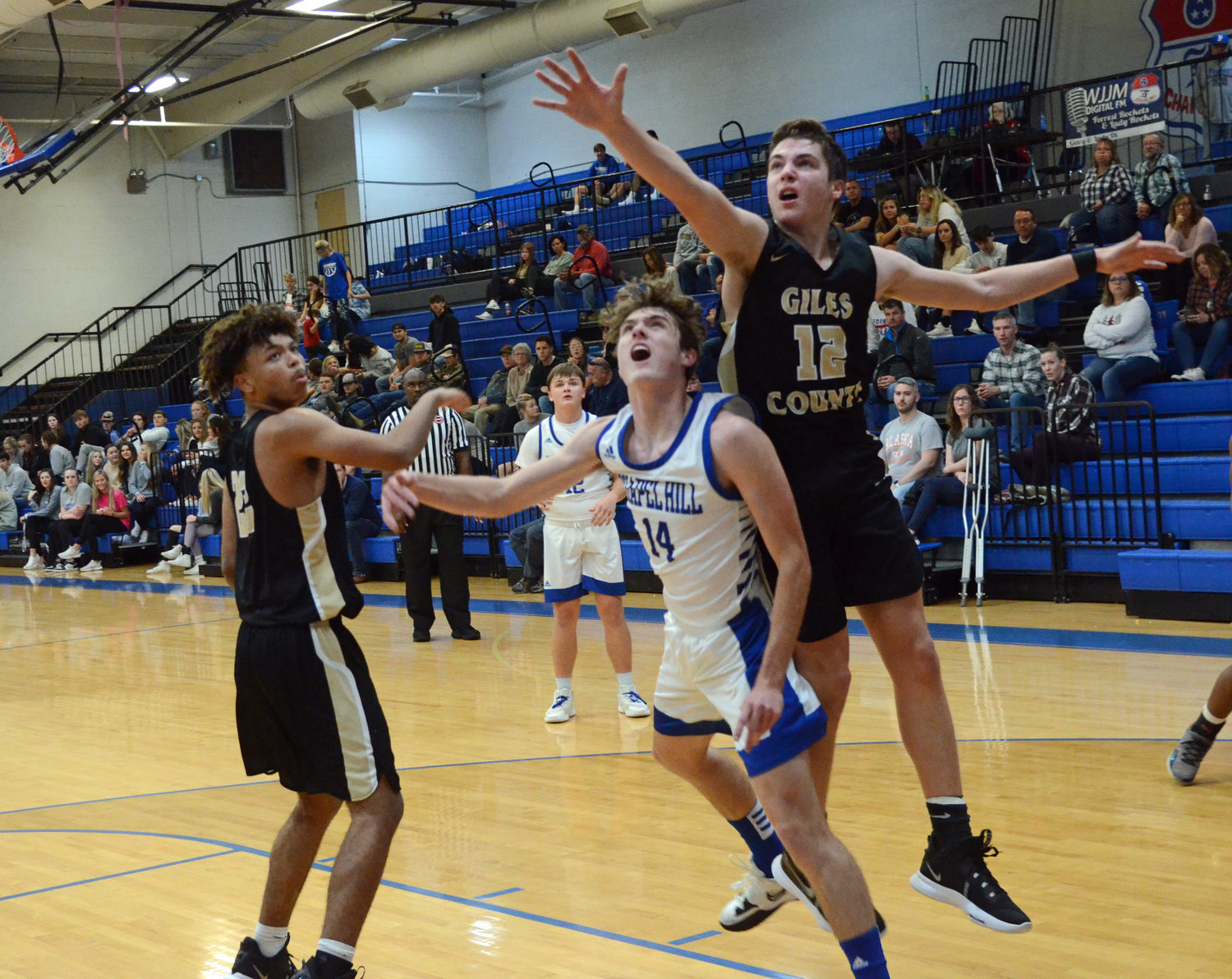 Hunter Bennett (14) looks up as his scope and score attempt goes through the hoop for two of his team-high 15 points versus the Bobcats. 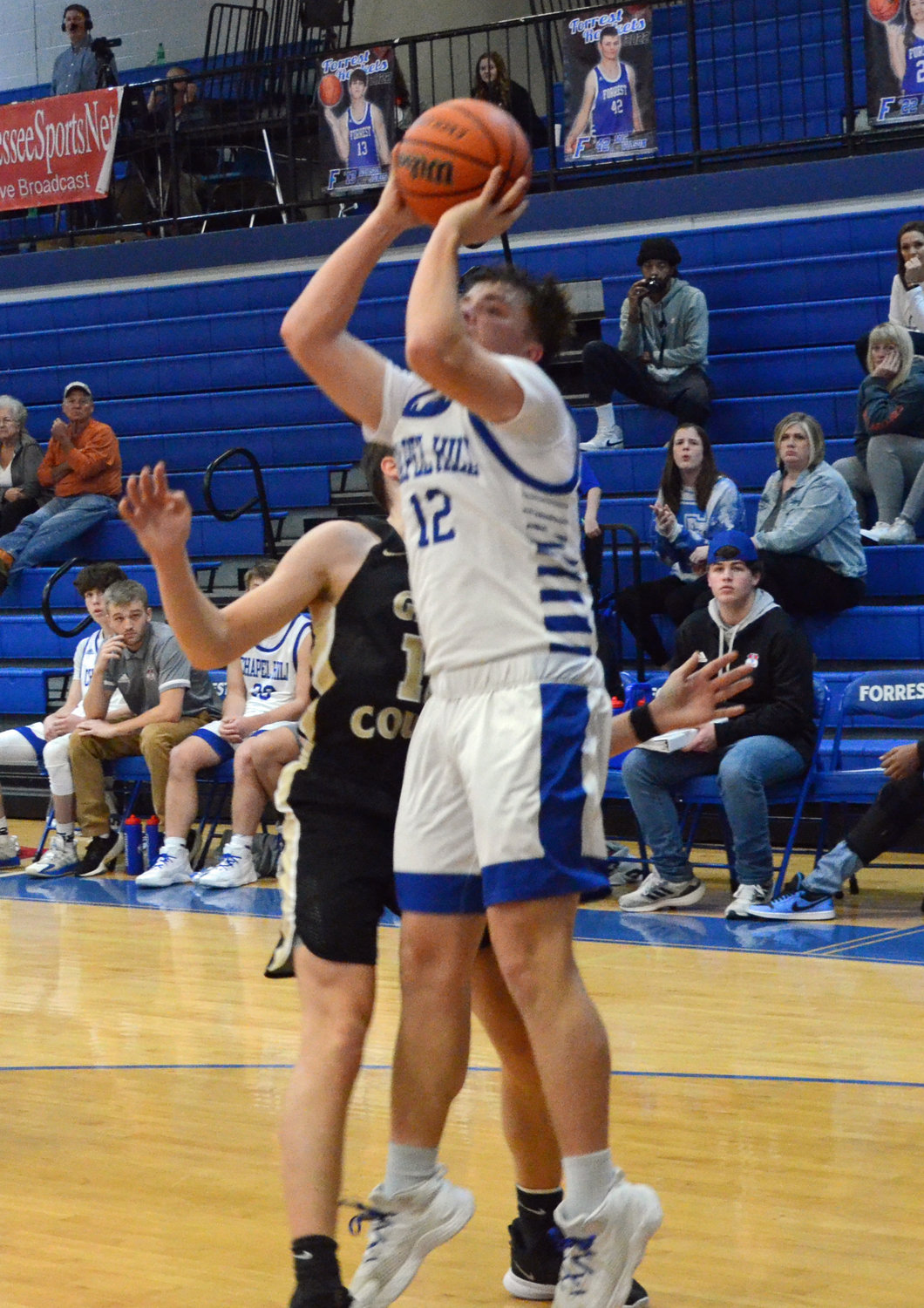 Brennan Mealer (12) pulls up for a jumper on the baseline for two of his 10 points in the game.
Previous Next
Posted Tuesday, December 21, 2021 12:22 pm
By Anthony S. Puca Sports Writer

The Forrest Rockets had a six-game win streak snapped last week by Moore County and wanted to get back to their winning ways on Friday night as they hosted the Giles County Bobcats.

The Bobcats were also not in a happy mood as they came to Chapel Hill mired in a seven-game losing streak and the two teams played a tight contest with Giles County coming out on top 59-49.

Jake Cardin came up huge for the Bobcats with a game-high 17 points, including a pair of 3-pointers and a 6-for-8 performance from the free throw line.

Jack Harper had 16 for the Bobcats and three 3-pointers while Kamari Turner was also in double figures with 12 points.

The Rockets were led by senior Hunter Bennett with 15 points while Brennan Mealer was also in double figures with 10 points.

Bennett and Mealer made the only two 3-pointers in the game for Forrest while Bobcats threw down seven long bombs.

Josh Rumley had eight points for Forrest, Ben Villazon and Deason Jones had six points apiece, and Preston Gentry and Andrew Timmons both had a deuce.

Villazon opened the game with a field goal for the Rockets before the Bobcats got the upper hand and built an eight-point lead twice in the first quarter until Bennett made a late basket to make it 18-12 after the first eight minutes.

Villazon and Mealer teamed up for four straight points to make it a two-point game at the outset of the second quarter, but the Bobcats held on and surged ahead again to lead 30-22 on a Cardin 3-pointer with 2:38 remaining in the stanza.

Bennett scored for Forrest and then the Bobcats went downtown on back-to-back possessions, opening up a 12-point lead at 36-24 before Mealer canned two free throws and drilled a 3-pointer to cut the Giles County to 36-29 at the half.

The Bobcats outscored Forrest 9-6 to open the second half to lead 45-36, but the Rockets came back again, beginning with a Bennett 3-pointer.

Rumley scored on a dime from Jones with 1:31 remaining in the period and Bennet followed with a field goal to cut the lead to three points, but one free throw by Turner ended the stanza with Giles County in the lead at 46-43.

The Rockets went ice cold from the field in the final stanza as the Bobcats scored eight points and held Forrest scoreless until Bennett finally got a basket with one minute left in the game.

One possession later, Cardin cashed in on two successful free throws on a Forrest technical foul and the Bobcats (2-7) cruised to the win from there.

Forrest (5-5) lost 69-59 at Huntland (2-9) on Saturday and will be back on the hardcourt next Tuesday when they take on the Richland Raiders (6-3) in their annual Christmas Tournament at Lynnville.