CHAPEL HILL — Even with the offense becoming a struggle at times in the first half, Lady Rocket coach Hal Murrell felt like his squad was well-within striking distance of the nine-point … 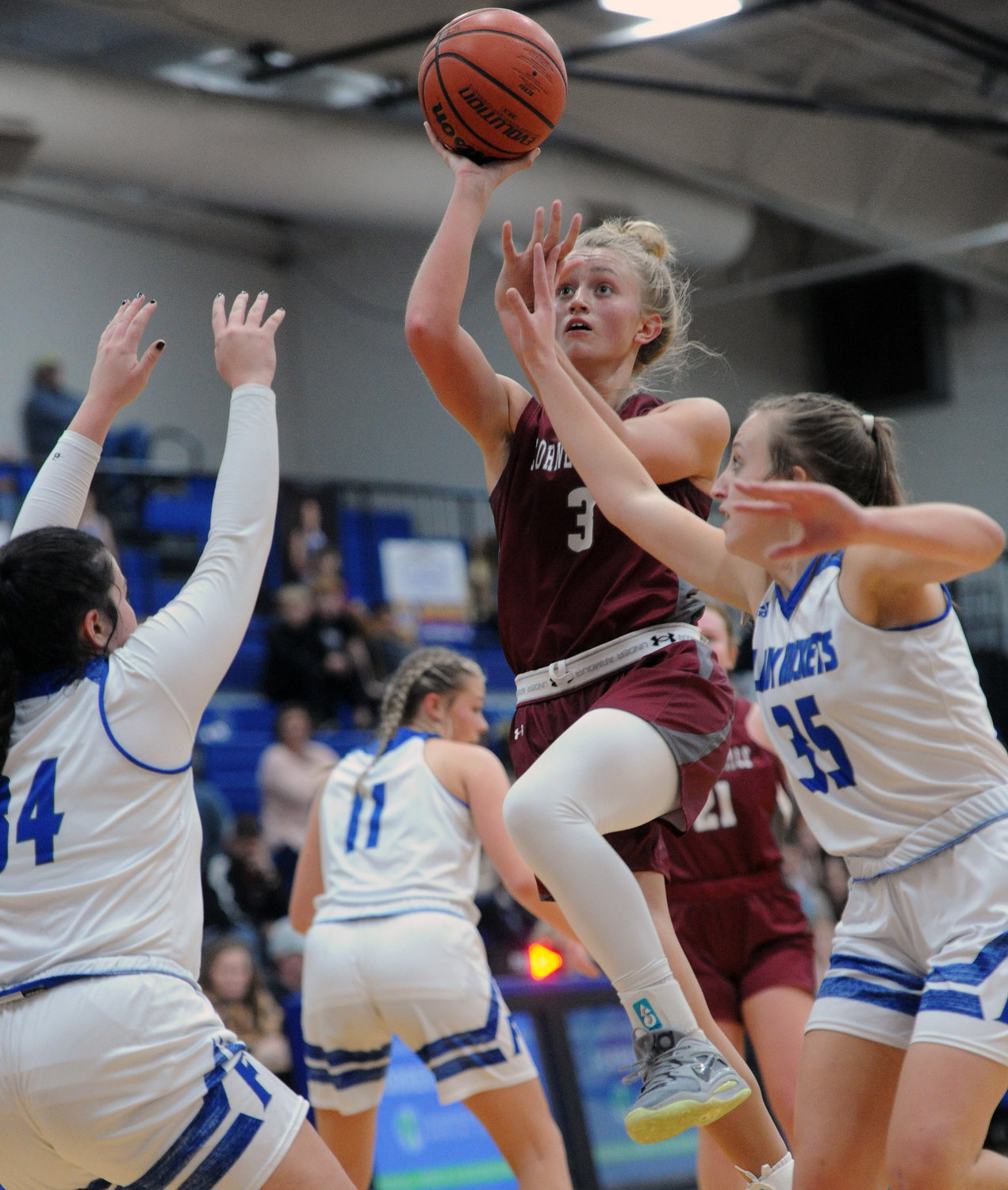 Alicia Polk flies in for a basket. She led all scorers with 17 points on Friday night.
Tribune Photo by Chris Siers 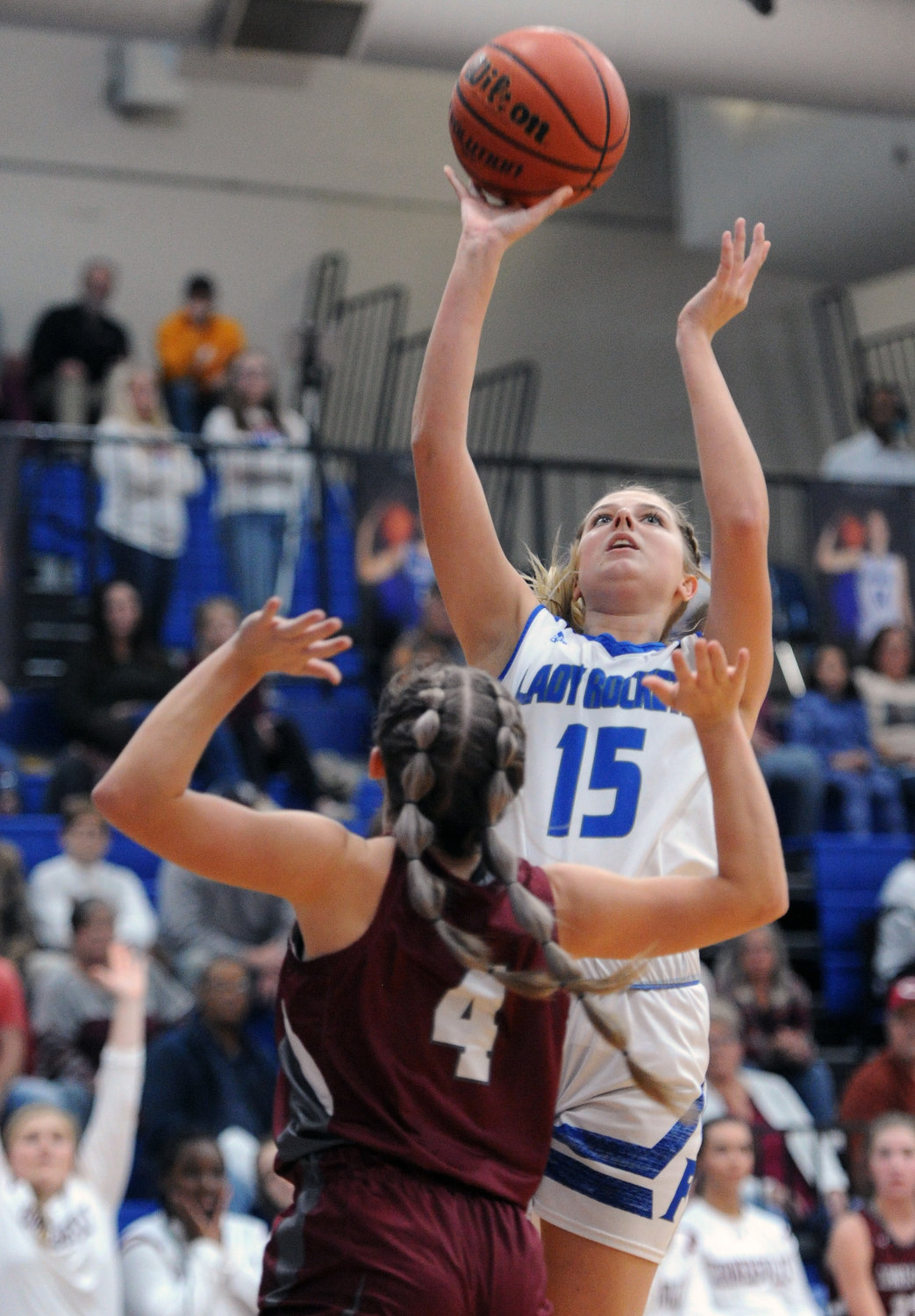 Megan Mealer goes up strong for a two-pointer against the Lady 'Dawgs.
Tribune Photo by Chris Siers 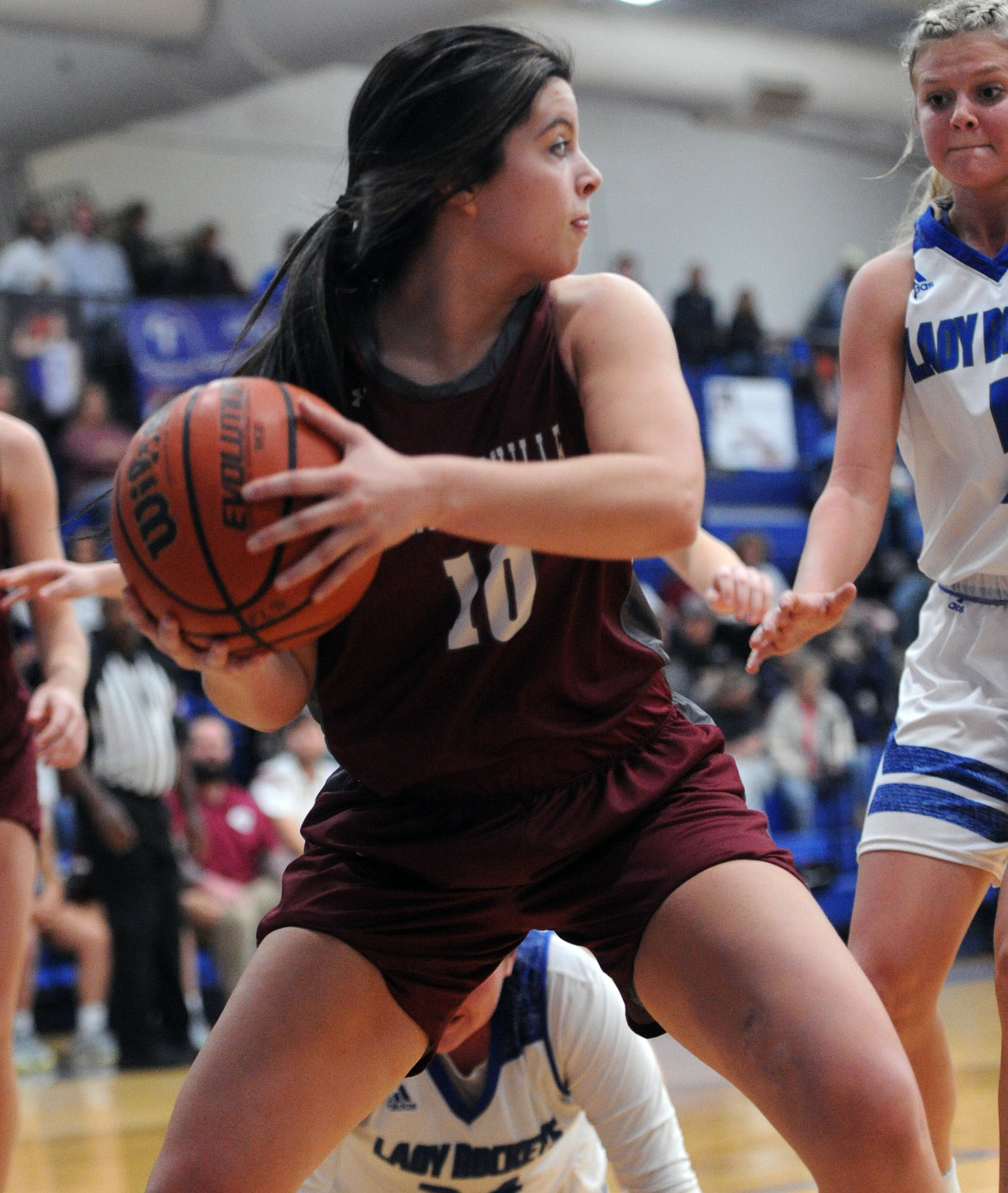 Katie Powers puts the clamps on a rebound in the second half against Forrest.
Tribune Photo by Chris Siers 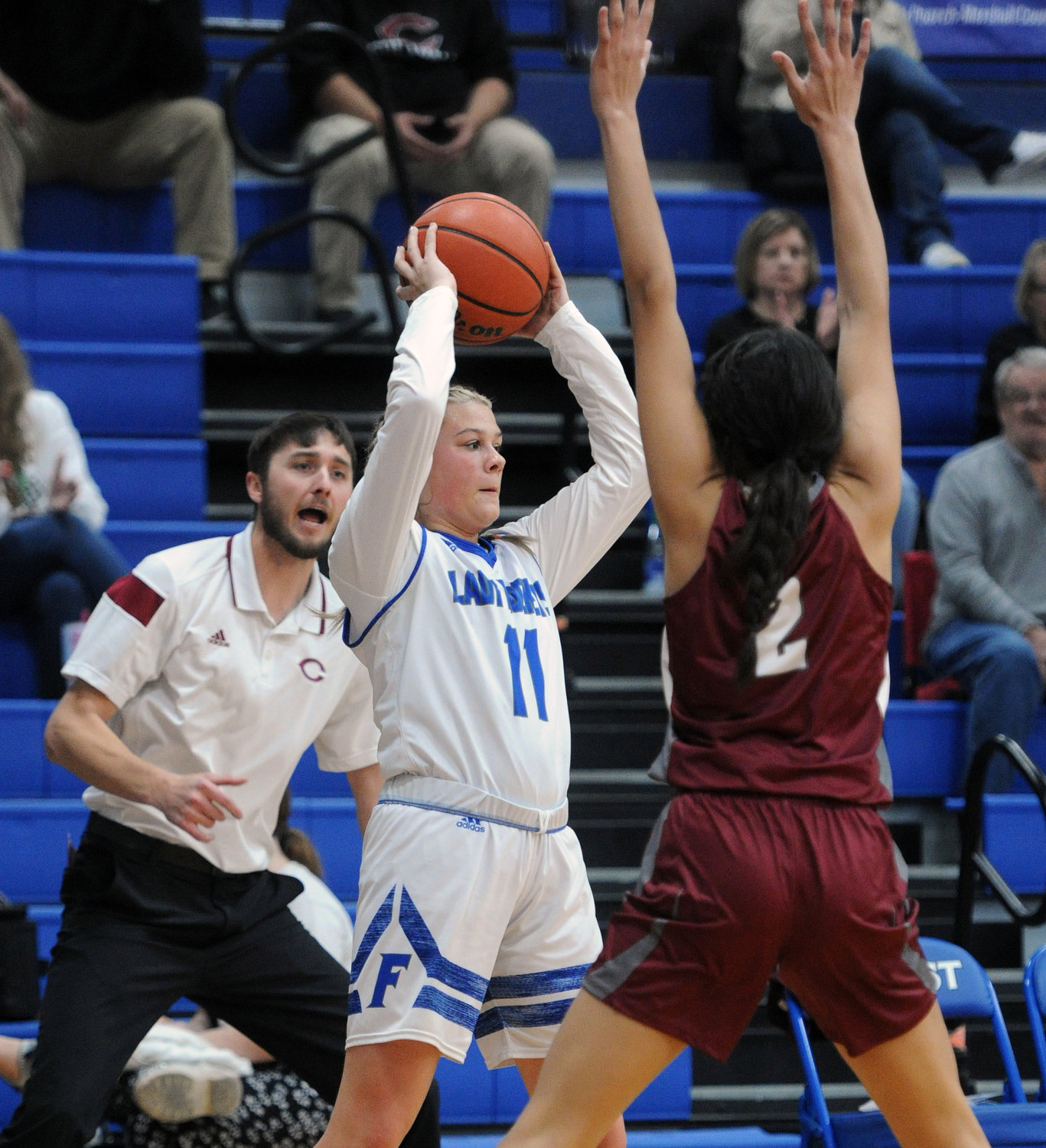 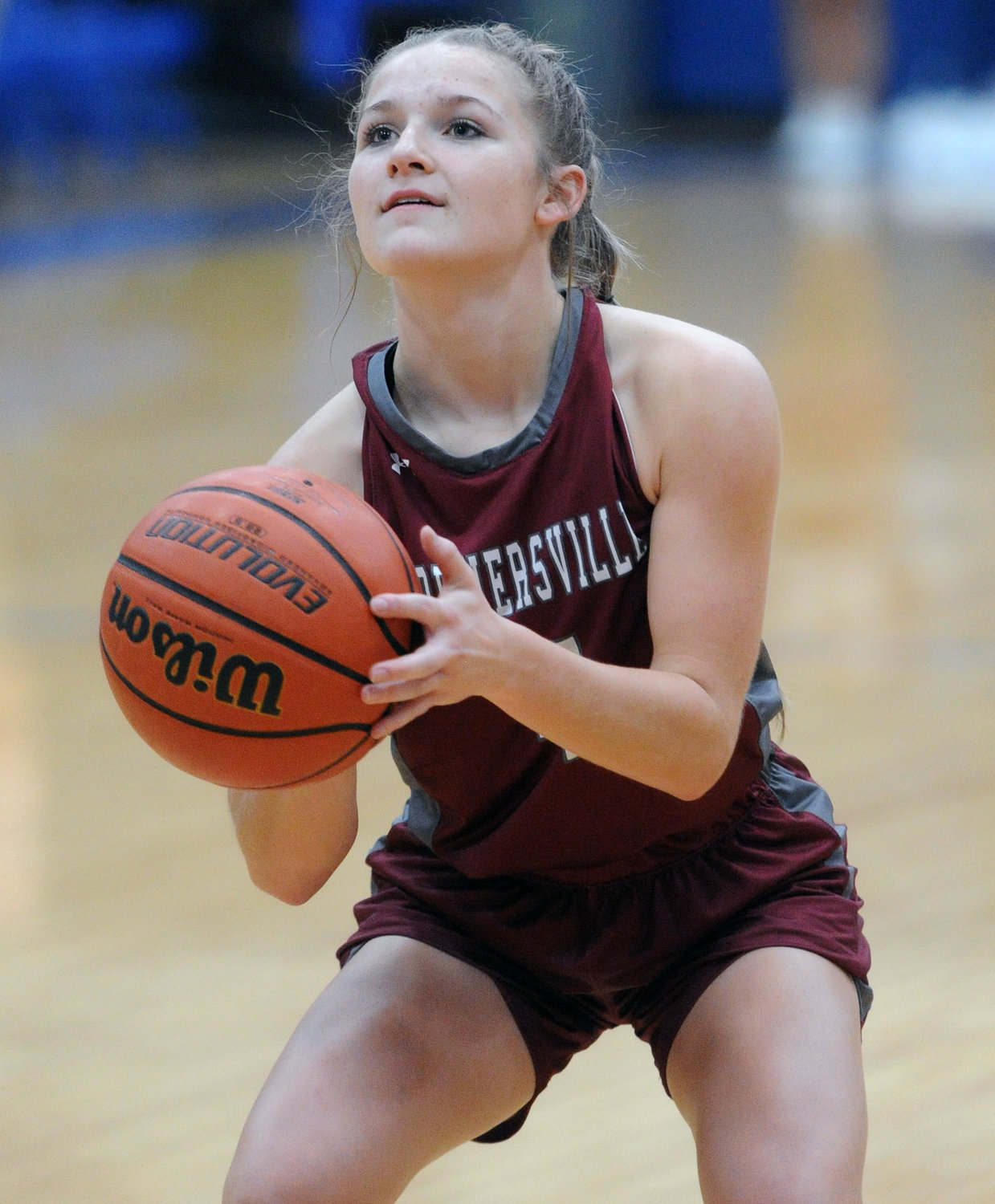 Jayli Childress settles in for a free throw against Forrest on Friday night.
Tribune Photo by Chris Siers 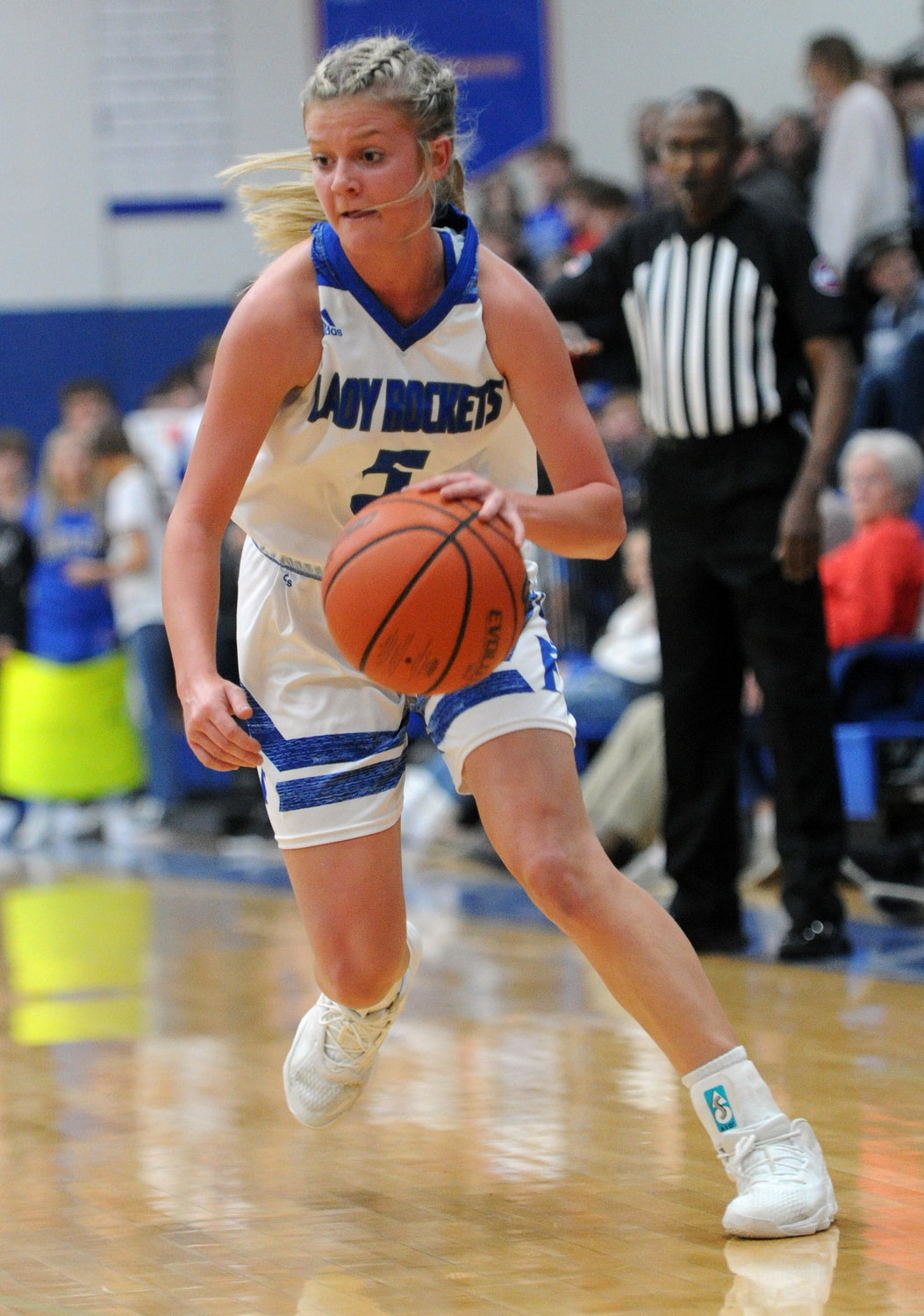 CHAPEL HILL — Even with the offense becoming a struggle at times in the first half, Lady Rocket coach Hal Murrell felt like his squad was well-within striking distance of the nine-point Cornersville lead at halftime.
But in the end, the Lady ‘Dawgs rattled loose for 18 in the third quarter and coasted to a 42-23 win over Forrest on Friday night.
For Cornersville, the Lady Bulldogs were able to limit Forrest to single digits in all four quarters played—a point of emphasis for Lady ‘Dawg coach Hayden McMahon during recent practices.
“That’s what we’ve been practicing the last week—defense, close outs, ball pressure, man-to-man, whatever it is, we preach defense,” he said.
“If we have a night when we can’t score, we have to rely on the defense. That’s why we practice defense so much.”
While Kinslee Inlow has been a source of offense for the Lady Rockets throughout much of her career, Cornersville marked her early on and didn’t allow many uncontested shots by the Forrest sharpshooter.
“She’s going to have to constantly be moving without the basketball, learn how to run off screens and learn how to catch and shoot,” Murrell said.
While the offense was a struggle for Forrest, two other points stood out to Murrell during Friday night.
“We struggled to score, which has been a recurring theme for us this year. The biggest thing for me was our turnovers and inability to get offensive rebounds,” he said.
Still, senior Macyn Kirby did what she could to manage the Forrest offense during Friday night’s clash.
“I thought Macyn Kirby tried to handle the brunt of the load for us and I thought we were ready to play when the game started,” Murrell said.
“We started off really sluggish with probably three or four turnovers to start the game and they got a little momentum. But even at halftime, it was a nine-point game and very reachable.”
With a nine-point lead in hand at the start of the third, Cornersville was able to exploit some mismatches in the low post and built a 16-0 run to open the third period.
“I thought we had some mismatches down low and we wanted to try and take advantage of that,” McMahon said.
“We’ve got a few girls who can go off on any night. I don’t think you can guard just one person on our team.”
In the third, it was Jayli Childress and Alicia Polk who combined for 17 points to lead the way for the Lady ‘Dawgs.
Forrest’s Meagan Mealer also gave the Lady Rockets several key minutes and hit some timely shots as well.
“She has to do that every single night—they get rebounds, they knock down key baskets, they communication on defense and get stops. She’s more than capable of doing that every night she walks on the floor. For us to be successful, she has to be one of those players for us,” Murrell said.
Childress and Polk led Cornersville with a combined 29 points, while Mealer was the lone Lady Rocket to hit double figures, with 10 points.
Forrest is back on its home court on Tuesday night, hosting Fayetteville City, while Cornersville hosts Hampshire.