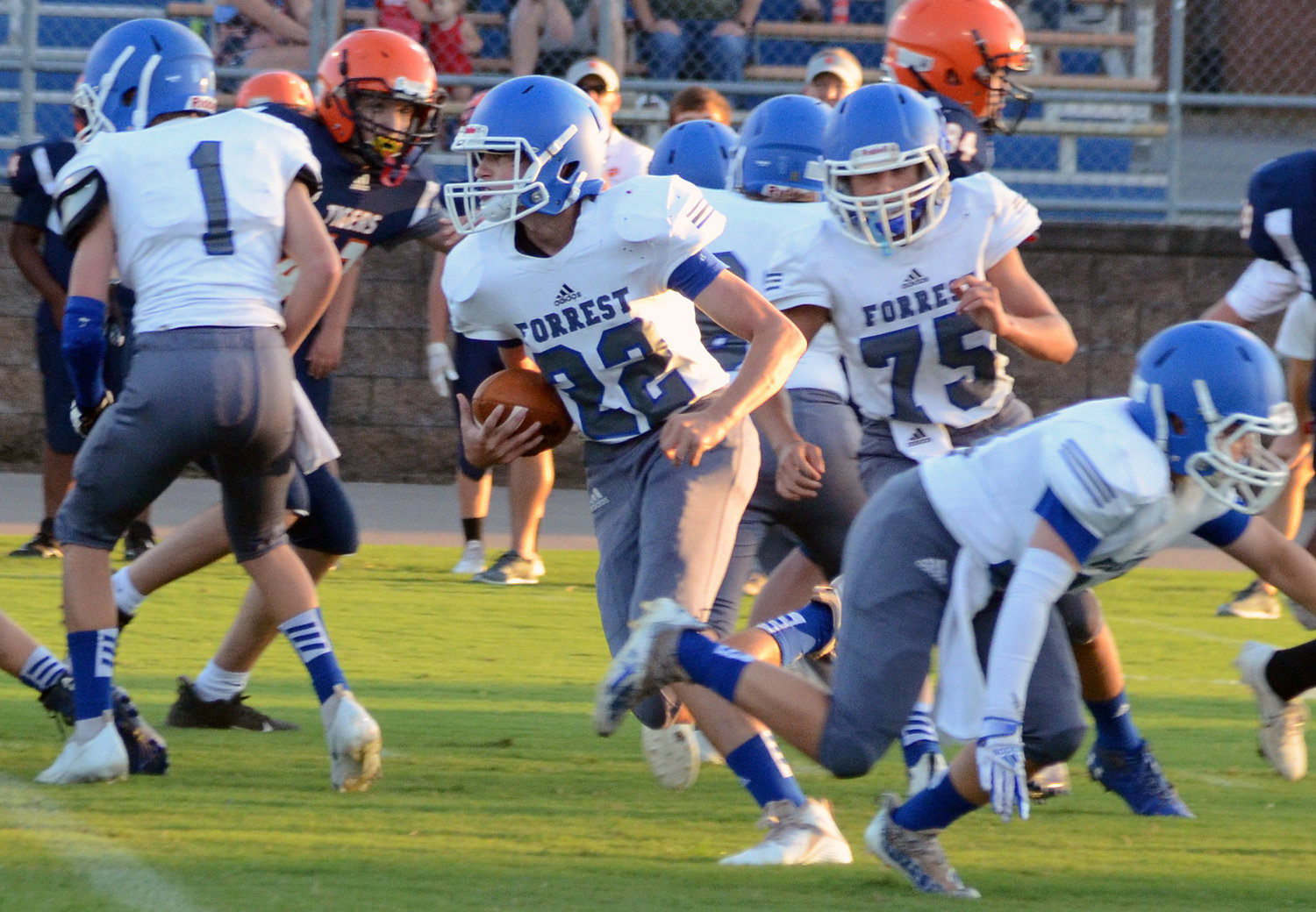 The FMS offensive line opens up a huge hole for Eli Bell (22), who rushed for 45 yards and a touchdown in the contest.
Tribune Photo by Anthony S. Puca
Posted Tuesday, September 7, 2021 12:43 pm
By Anthony S. Puca ~ Sports Writer

The Forrest Middle School Rockets had three weeks to prepare for their biggest test of the season as they travelled to Fayetteville to take on a Tigers’ squad they had not beaten since 2014.

It was not even close.

“I’m so proud of this group. We didn’t get to play last week or the week before, but these guys can adapt to any situation,” FMS coach Tony Johnson said. “I can’t be more proud of them from every phase of the game — offense, defense, and special teams, this win goes to those guys for sure.”

Forrest pummeled the Tigers 38-0 as they rushed for 209 yards in the contest and the Rockets’ defense held Fayetteville to 57 yards rushing in the shutout.

“I think we were a little nervous, a little rusty from not playing on Fayetteville’s first drive, but we settled in and did our jobs,” Johnson said. “We set the tone and once we put our foot on that gas, we didn’t let up at all.”

Antonio Marable led the way with 72 yards on three carries and two of the attempts were touchdown runs of 41 and 31 yards.

Fletcher Fields had 10 carries for 53 yards, Eli Bell had five touches for 45 yards while Cohen Grissom had six rushes for 39 yards and all three ran for touchdowns in the contest.

“Antonio was itching the whole first half…coach let me run the ball, let me run the ball…I said just wait, we are going to have fresh legs,” Johnson said. “Grissom was running hard, he had the big truck in the end zone and Bell and Fletcher ran the ball really hard tonight, so I can’t ask more from those guys.”

Ryan Hill completed one pass for 35 yards, but it was big one and probably the one play that changed the game and gave FMS all the momentum they needed.

After Fields and Bell scored first half touchdowns to put FMS in front 14-0 at the half, Johnson came up with a beauty of a play call when Hill threw a perfect 35-yard strike to Kasen Owen on the first play of the second half.

The Tigers’ defense was crowding the box and the pass completely caught them off guard.

“Ryan Hill is a great quarterback and my receivers told me at halftime the quick fade was there,” Johnson said. “I knew we had been running the ball the whole first half, so I figured let’s take a shot and see what happens and it turned out well for us.”

After a five-yard run by Bell and a subsequent false start on the Rockets, Bell caught an 8-yard two-point conversion pass from Hill to make it a 22-0 contest.

Fayetteville went three-and-out in its next offensive possession, but got the ball back on a fumble as the home team tried to stay in the game.

The Forrest defense would have none of it as they bowed up and stopped the Tigers on a fourth down play at the FMS 31-yard line with 2:25 remaining in the third quarter.

Fields picked up a first down on an end-around and 15 more yards were tacked on via a Fayetteville personal foul on the Fields tackle.

Marable took the next snap from Hill and busted up the middle, breaking tackle after tackle before running in the clear for a touchdown and Marable added the two-point conversion run to make it a 30-0 contest with 27 seconds remaining in the third quarter.

The FMS defense made one final stand with another three-and-out before Marable put the icing on the road trip cake as he scored again, this time taking a pitch and outrunning the Fayetteville defense for his second touchdown of the game and the 38-0 final score.

The win put FMS one Duck River Valley Conference win away from a spot in the title game.

FMS (3-0) can clinch the spot in the DRVC title game with a win at Cascade this week.

The Rockets return home for a middle school homecoming non-conference game versus Cannon County on September 16 and finish up the regular season slate when the host the Community Vikings (DRVC) on September 23.

“We are on to the next one after tonight, our focus is on Cascade, we will focus on those other two when we get to it, but we are ready to work and we are ready to get after it,” Johnson said.

If the Rockets win versus Cascade and Community, FMS will host the conference title game.

“That would be awesome, I know the crowd would be huge, the fans were big here tonight in Fayetteville with their support, so I would love to have the championship game at home for sure,” Johnson said.