Woodward perseveres for the love of the game 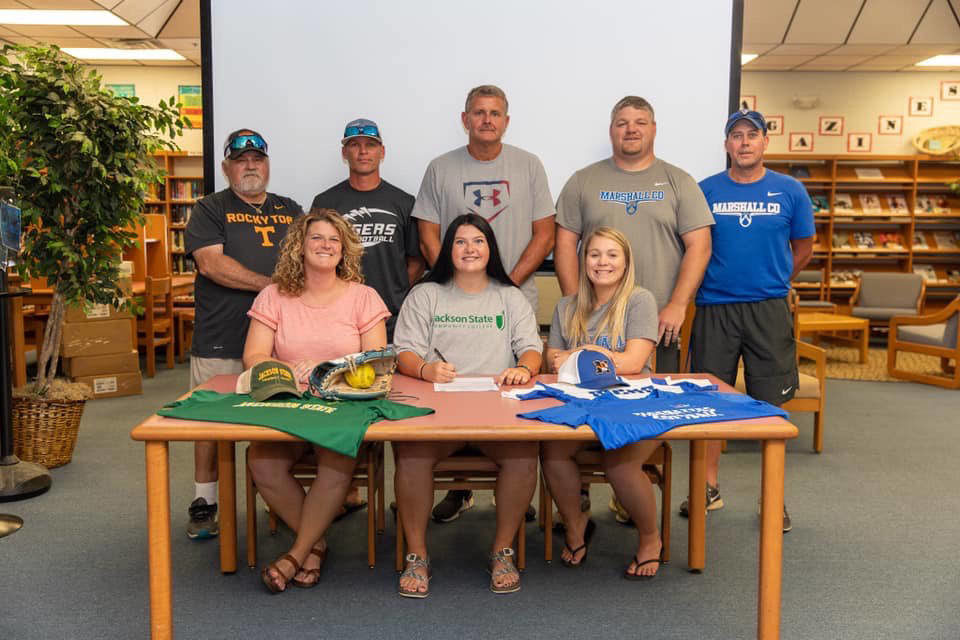 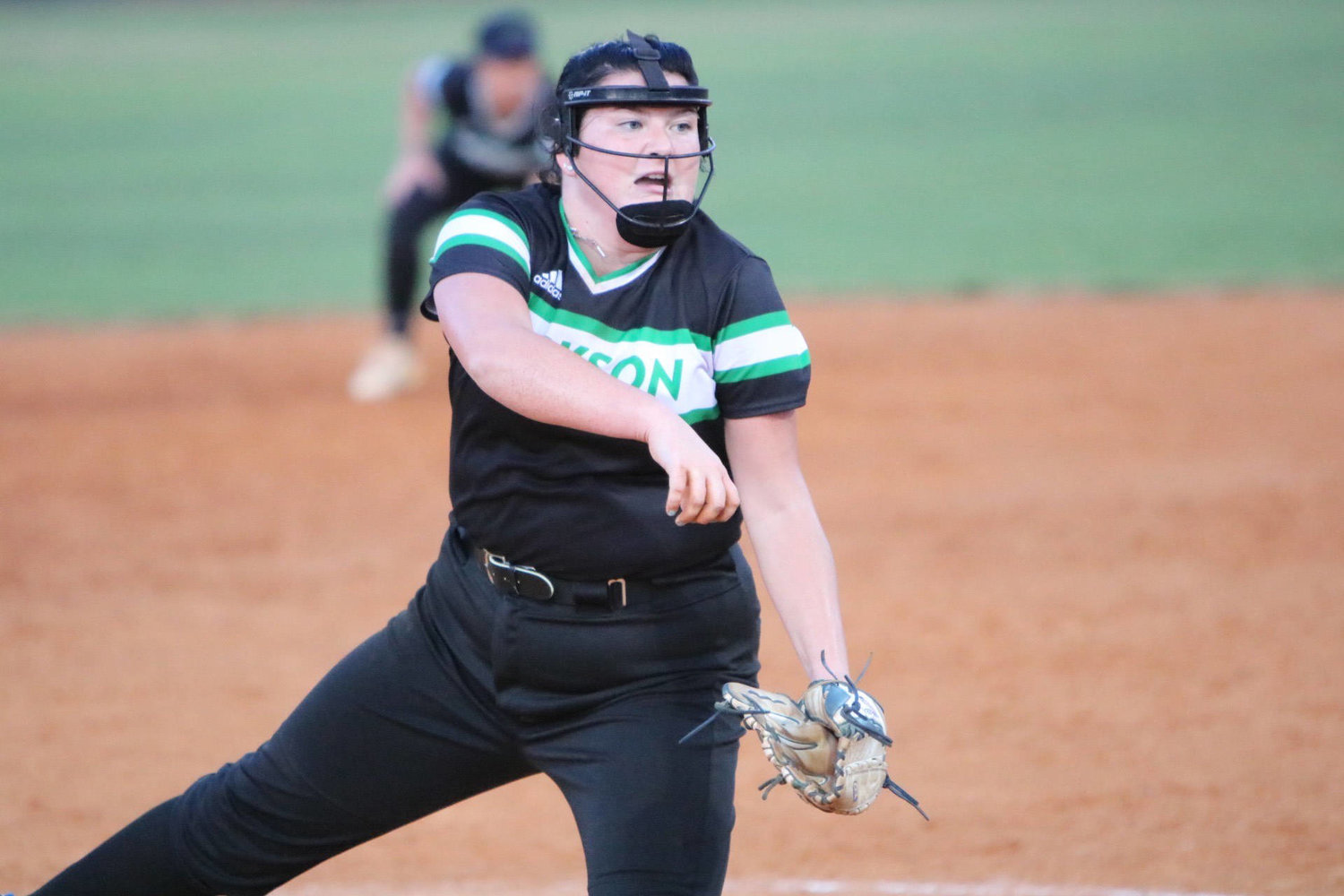 Marlee Woodward is looking to get some quality time in the circle for the Lady Green Jays this season. Photo submitted 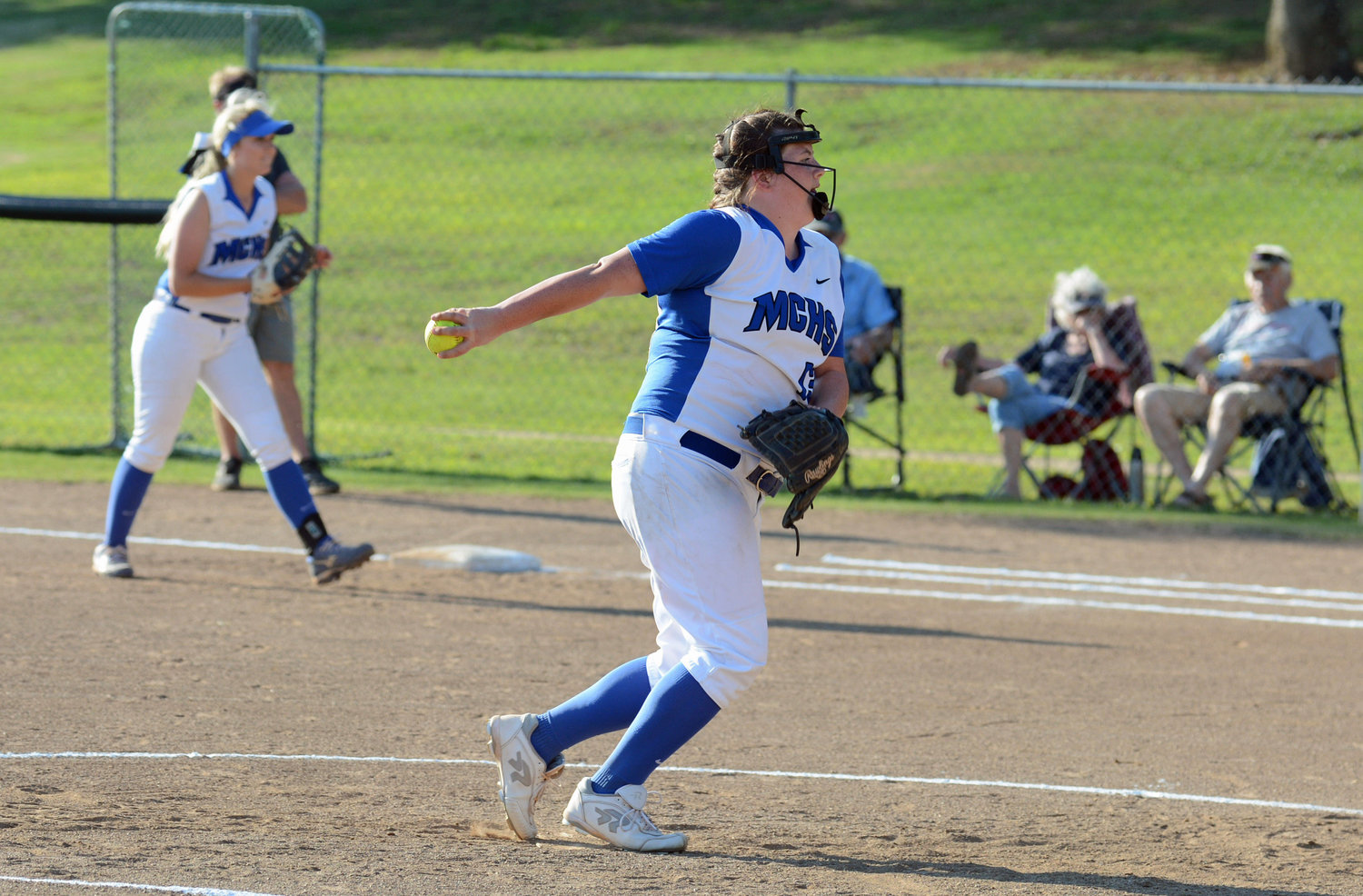 2019 Marshall County High School graduate Marlee Woodward has experienced adversity in her quest to play college softball, but just like the pressure of throwing a good 3-2 pitch with the bases loaded, Woodward has overcome and now looks to thrive in her freshman season at Jackson State Community College.

“My time at Jackson State so far has been nothing short of a dream,” Woodward said. “Being forced into meeting new people and being pushed out of my comfort zone has been one of the best things to ever happen to me.”

Woodward knows adversity, facing a slew of roadblocks in high school while playing for three coaches with the Tigerettes during her four years on the squad.

After sharing duties in the circle during her freshman season under coach Heather Denton, Woodward was the number one pitcher her sophomore season and garnered All-District honors as the Tigerettes went 10-18.

Denton resigned for personal reasons following the campaign and Wes Woods took over.

Woodward was pushed aside during Woods’ reign and wasn’t sure whether she wanted to come back for her senior year, but her love of the game and a never say die attitude led to Woodard returning to the Tigerettes after Woods left for Summertown and Bailey Taylor took over at MCHS.

“After my junior year, I decided that I was no longer going to be a member of the Marshall County High School softball team; that was one of the biggest decisions I had ever made,” Woodward said. “Even though I was not planning on playing school ball my senior year, my love for the game was still there more so than ever before.”

The Tigerettes went 7-15 last season and Woodward was once again chosen to the All-District 12-AA Team.

“The summer leading up to my senior year, I continued to play and have success in A-Class tournaments every weekend and I believe that because I stuck to what I loved doing the most that summer, it led me into being the ballplayer and person I am today,” Woodward said.

In her final home game as a Tigerette, Woodward shined bright in the circle, tossing a complete game in a 7-4 win over intra-county rival Cornersville at Reese Hambrick Field in Lewisburg.

“Once I came to the realization that I’d played in my last game as a Tigerette, I knew that I had left every ounce of heart on the field and that I was saying goodbye to some of the best memories of my life,” Woodward said about her time as a Tigerette.

Woodward gave up seven hits in seven innings of work, giving up three earned runs on seven hits while striking out five and walking none.

Woodward once again wasn’t sure about her future on the softball diamond until Jackson State Community College came calling and she accepted an offer to attend the Jackson school.

Woodward appeared in a couple of games in the circle during this fall season and just like in high school, a coaching change has mixed things up for the Green Jay softball program when former South Gibson High School four-sport athlete Taylor Moore was recently named the coach at Jackson State.

Moore played at the collegiate level at Dyersburg State Community College and Martin Methodist College and was an assistant coach for the Lady RedHawks for two years after graduation.

The Lady Green Jays posted a 17-30 record last season and went 9-23 in the Tennessee Community College Athletic Association (TCCAA), but Moore is optimistic about the future.

“I feel we are the dark horse,” Moore said. “This team has worked hard this last month to prepare for lost time without a coach, and they are ready to take on whatever challenges this season throws at them.”

Moore had nothing but good things to say about Woodward in a recent interview, saying, “Marlee is a go-getter on the field, she is always ready to learn something new and takes in everything that she is being taught.”

“She is an amazing student and is getting it done in the classroom. As a person, she is awesome. She will give you the shirt right off her back, she is a true team player and a great teammate to everyone.”

Asked about how Woodward could hone her skills to get time in the circle this year, Moore said, “We are working on her spin and leg drive this offseason. I plan for her to come in and make a difference.”

After having a few opportunities to pitch in the fall and having some quality time with Moore, Woodward was also optimistic about the future.

“Coach Moore is bringing great energy to our program,” Woodward said. “With the little time I’ve had playing for coach Taylor, I am thrilled to see everything we will accomplish this season.”

Continuous improvement is necessary at the collegiate level and Woodward is ready for the challenge as usual, working on the parts of her game that will make her better and help the Green Jays improve upon last year’s record.

“I believe how much I pitch this year will be determined by how much I push myself in the offseason,” Woodward said. “In the fall, I was our number-two pitcher out of seven. Being that coach Taylor has already taught me two new pitches, I’m excited to see how much I’ll pitch this season.”

It is sometimes strange how things work out and who you meet along the paths of our lives and Woodward found out when she went to Jackson State and her roommate was Makenna Birdsong, an old high school archrival from Giles County.

Birdsong came up with the only RBI off Woodward in the final game of the 2016-2017 season in a 1-0 loss to the Lady Bobcats in the District 12-AA Tournament in Pulaski.

“Being a member of the Jackson State softball team has already been such a great learning experience, the relationships I’ve developed and the memories I’ve made so far with my roommate and teammates are absolutely priceless,” Woodward said.

Woodward struck out four and walked none as she tossed a complete game, giving up just the lone fielder’s choice RBI to Birdsong in the bottom of the fifth inning.

“The best memories that I can remember from Tigerette softball were not on the field; my favorite memories were hearing from parents of little girls that had watched me play,” Woodward said. “Hearing that I played as a positive role model in their child’s life is one of the most rewarding aspects of the game. As a Tigerette, I learned the importance of being a good teammate.”

Woodward future is very bright and she is the epitome of role model to follow.

After sporting a gaudy 3.97 GPA at MCHS, Woodward is carrying a perfect 4.0 GPA going in to finals week at Jackson State.

Asked about her plans after Community College, Woodward said, “I’m currently double majoring in business and accounting and after Jackson State, I plan on attending somewhere to major in business analytics, but I do not know where.”