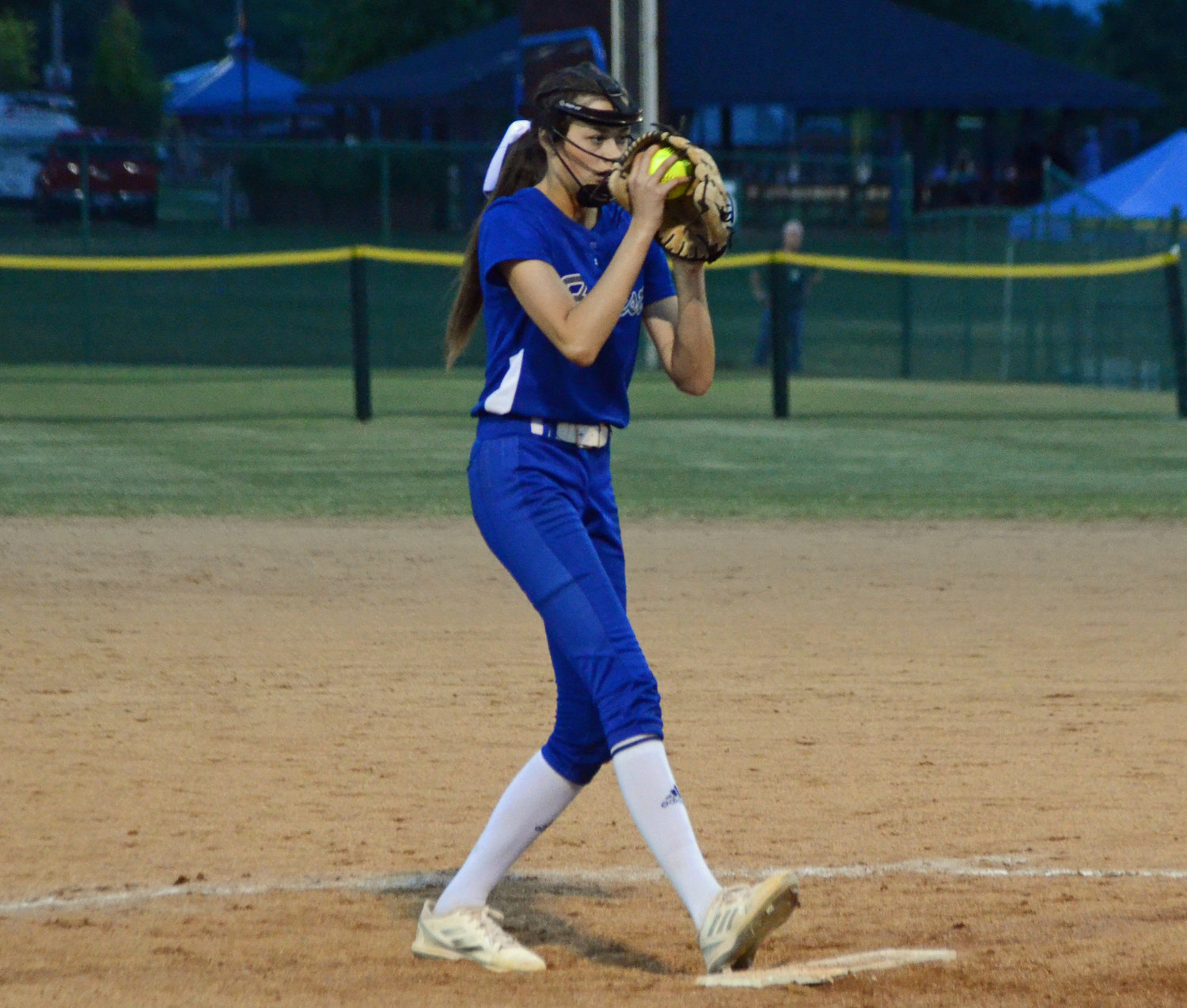 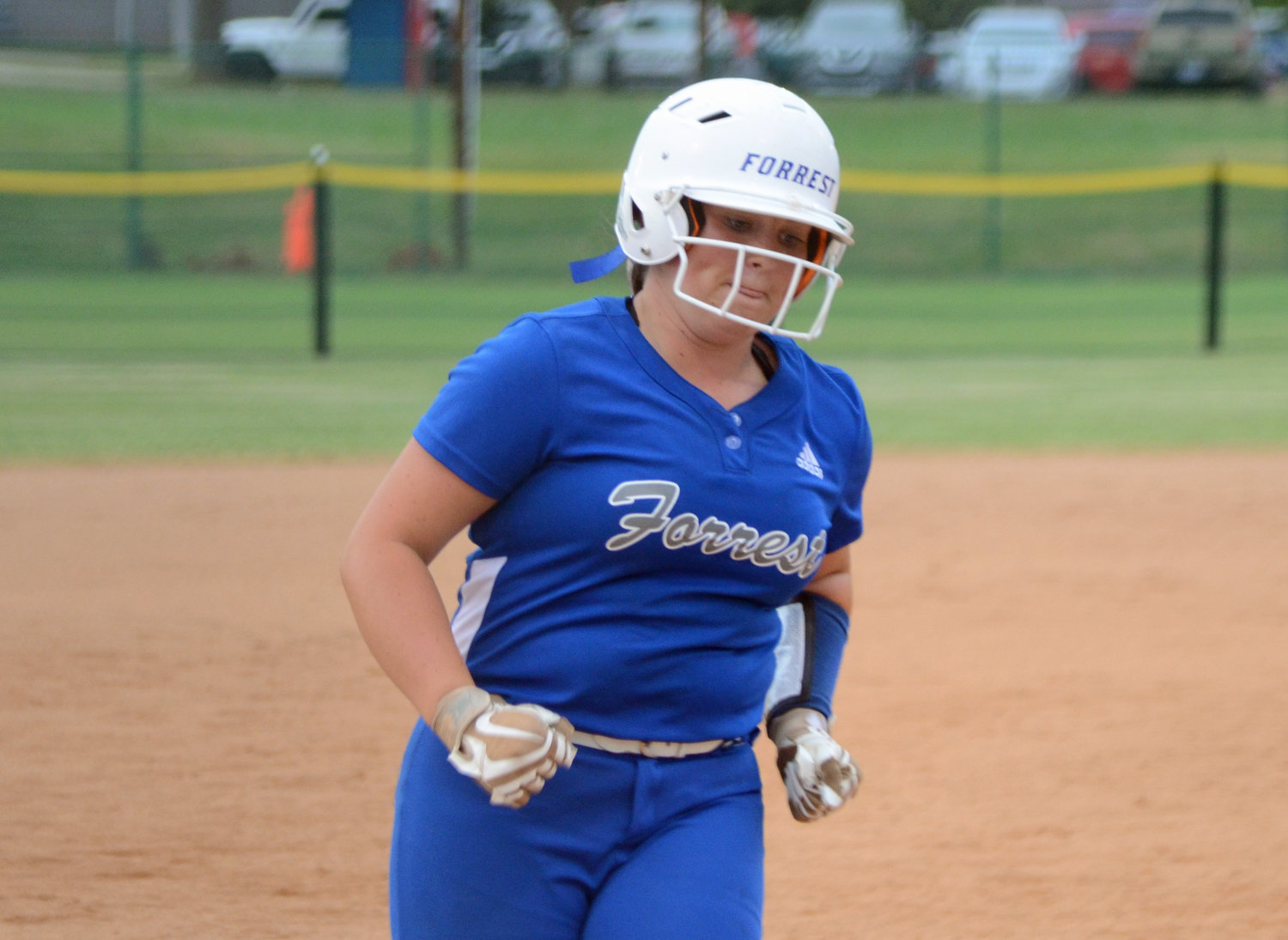 Forrest junior Carli Warner is in her homerun trot after belting the game tying two-run bomb in the fourth inning versus Meigs County in the first round win at Spring Fling XIX at Murfreesboro Tuesday night. 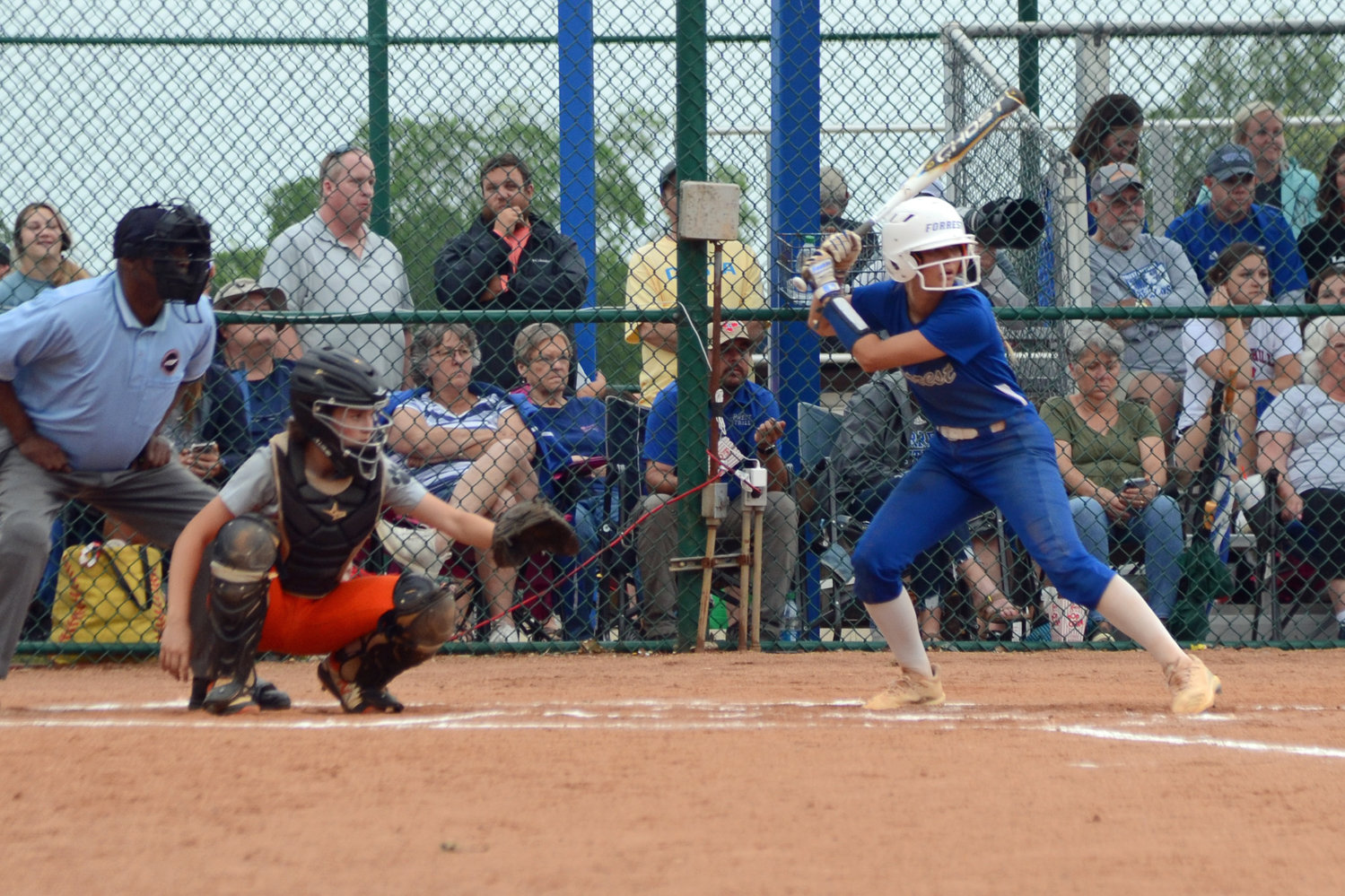 Briley Burnham had a big game for the Lady Rockets, going 2-for-3 at the plate with an RBI and Burnham scored the go-ahead run in the bottom of the sixth inning. 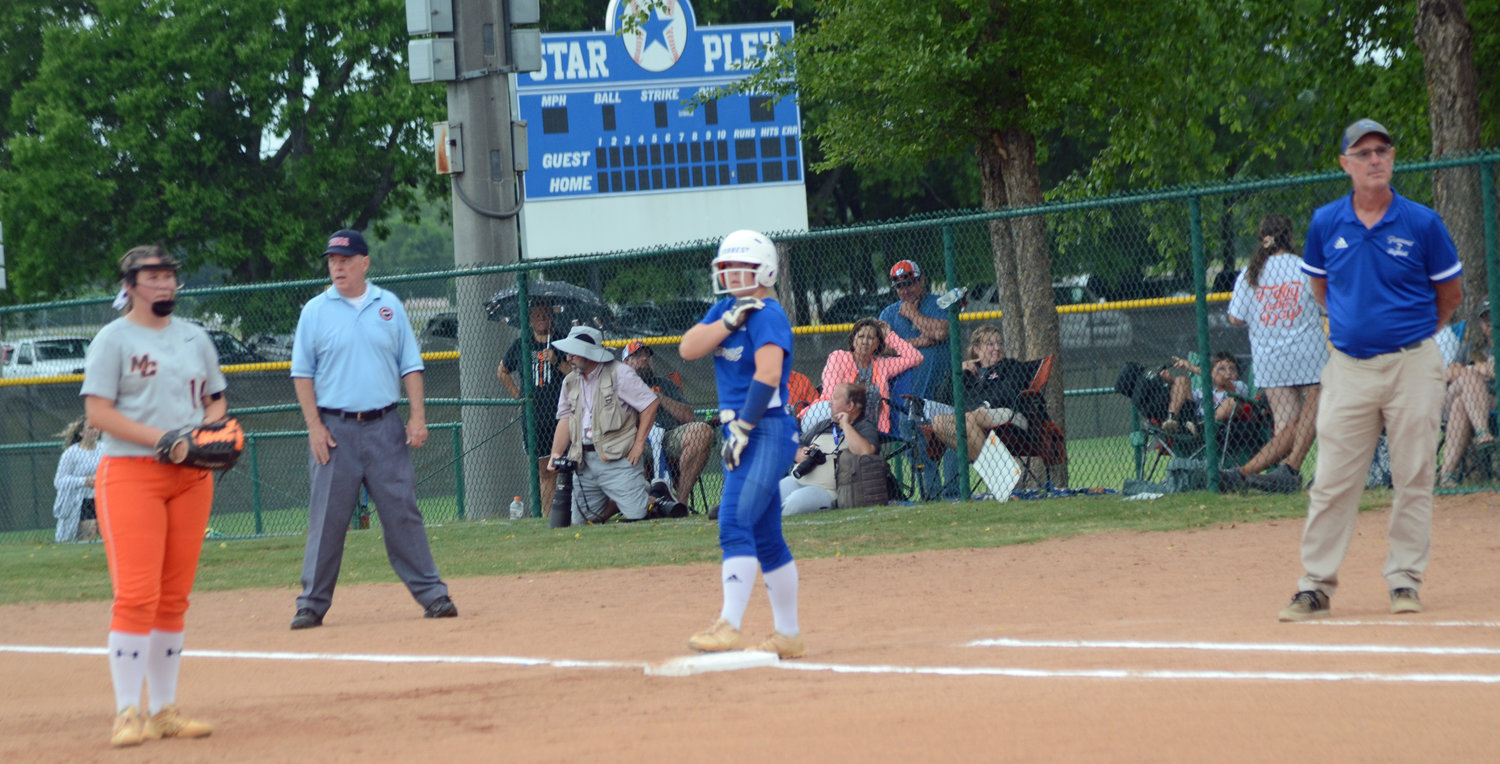 Christa Warren walked all three times she batted and scored twice for the Lady Rockets. 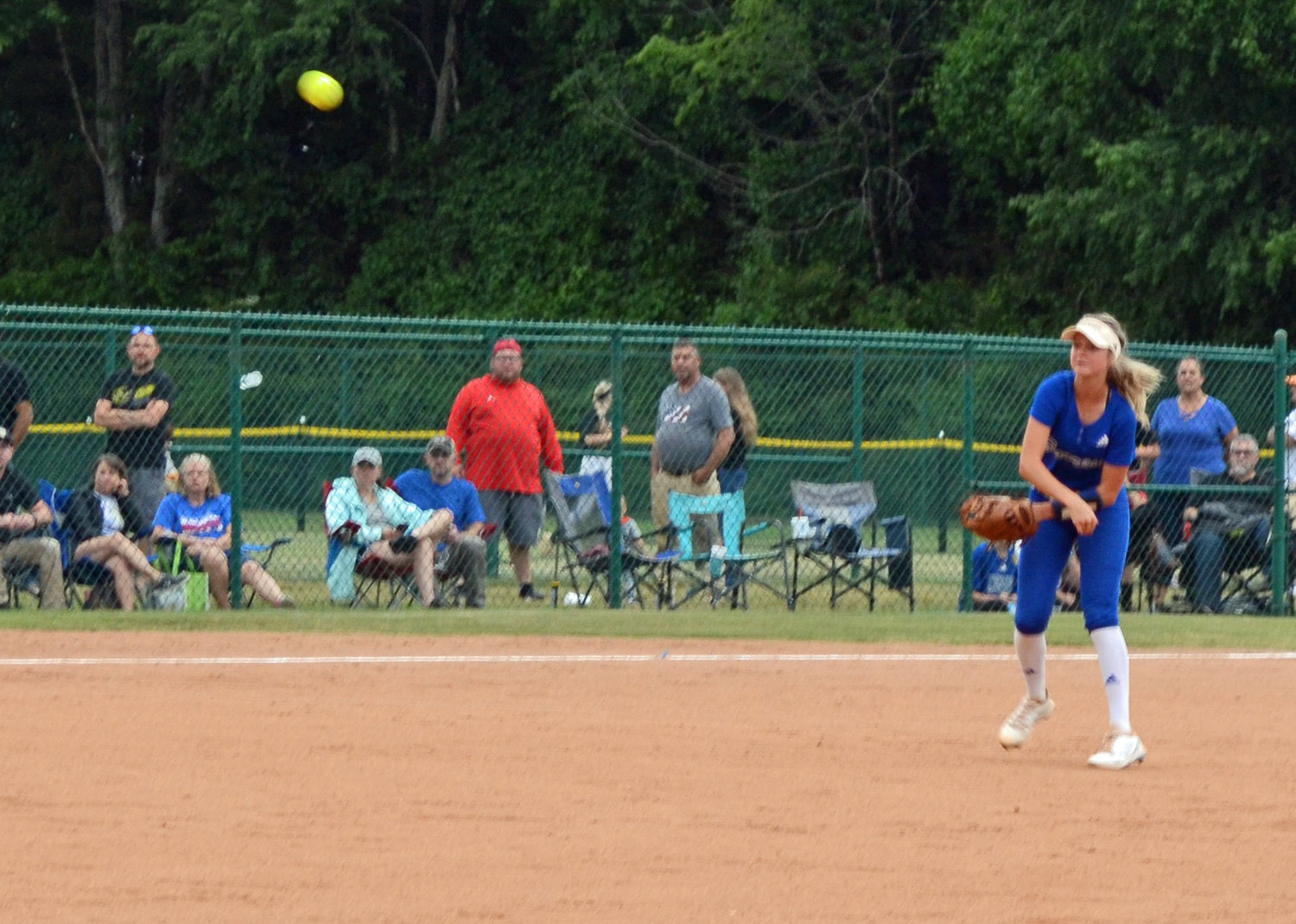 Forrest shortstop Macyn Kirby guns down a baserunner in the third inning.
Previous Next
Posted Wednesday, May 25, 2022 7:51 am

“My first at bat I just got a little under it and I knew the second time up I had her number,” Warner said. “I had a runner on and I was fixin to hit it, she pitched it right inside and then whatever, there it was. It was a motivator, after that we knew we were back in this and all we had to do is score one or two more.””
Carli Warner
By Anthony S. Puca Sports Writer

The Forrest Lady Rockets entered the big stage as the back-to-back state champions and they showed why in Tuesday night’s opening round of Spring Fling XIX with a come from behind 5-2 win over Meigs County.

“I feel like this was the most important win, because you don’t want to play out of the loser’s bracket” Forrest coach Shelby Lightfoot said. “Just getting through and getting the nerves out. This is a group that is very compassionate, whether people know it or not they don’t want to let people down. It has nothing to do about them, they just feel like they will let the school or the community down, so for them to get through this game was a big confidence booster.”

Forrest freshman Ella Chilton turned in a masterpiece relief job in the circle, tossing five innings of no-hit ball to pick up the win and junior Carli Warner’s game tying two-run homerun in the bottom of the fourth inning sparked the Lady Rockets’ bats.

“Carli came through with a huge hit, I just don’t know how else to say that,” Lightfoot said. “She has always been clutch in the big moments and that was a big moment and it gave us confidence to move forward with our hitting.”

Chilton came to the circle in relief of starting pitcher Julie Williams in the top of the third inning with two runners on base and no-outs, trailing 2-0 and hit the first batter she faced to load the bases.

Sierra Howard hit a grounder back to the circle and Chilton fired home to catcher Parker Wales for the first out and Wales gunned to first for a huge double play.

Chilton walked the next batter before getting out of the jam on a groundball to Macyn Kirby at shortstop.

After that, Chilton only allowed two Meigs County batters to reach base the remainder of the contest and they both came on walks.

“Ella has done an excellent job closing for us all year,” Lightfoot said. “She has been hungry for it, she has asked for the ball a few times and she came through. She came in and commanded the zone and she pounded it, so it was great.”

Chilton tossed a 1-2-3 fourth inning and had little trouble in the top of the fifth.

Madylin Johnson drew a leadoff walk for Meigs County in the top of the sixth inning before the Lady Rockets threw some leather at the Lady Tigers as Forrest third baseman Christa Warren took over.

Warren grabbed a hot shot and threw to second for a force out for out number one and then gobbled up another ground ball and turned an around the horn double play to end the inning.

“We have talked to them and preached to them all year that defense will win championships,” Lightfoot said. “Defense and pitching will keep us in the game and if we do those two things our bats will come alive.”

Meigs County starting pitcher Lainey Fitzgerald mowed down Forrest over the first three innings, giving up no hits while striking out five.

“It’s the same broken record, we have to let a few runs score, it’s definitely not the inning we want at the beginning,” Lightfoot said. “The first time through, she (Fitzgerald) was spinning the ball very well and throwing it the zone well and we were chasing a lot of pitches. It was a little bit of nerves and a little bit of excitement and we had to find a way to settle down.”

Even after issuing a leadoff walk to Warren in the bottom of the fourth, Fitzgerald seemed in control as she retired the next two Forrest batters, but Warner changed the entire tone of the game with a long two-run bomb over the center field fence.

“My first at bat I just got a little under it and I knew the second time up I had her number,” Warner said. “I had a runner on and I was fixin to hit it, she pitched it right inside and then whatever, there it was. It was a motivator, after that we knew we were back in this and all we had to do is score one or two more.”

Chilton held the Lady Tigers in check and in the bottom of the fifth inning, Briley Burnham lined a leadoff single.

After a pop-up out, Maggie Daughrity came up and slashed a rope in to the left field corner and Burnham scored all the way from first base to put the Lady Rockets in front to stay.

Forrest added a pair of big insurance runs in the bottom of the sixth inning on an error and an RBI single by Burnham.

Chilton took the three-run lead to the top of the seventh inning and the freshman closed the game out quickly on a strikeout, a groundout back to the circle, and the game-ending fly out to Daughrity in right field.

“Props to her (Chilton), she came in there with a gun show and shut them down,” Warner said. “Our defense was really good tonight too, we turned two double plays for her and I think it was just an all-around really great game.”

“We knew coming into this we were young and had to lay it all on the line,” Warner said. “Coming off a win we are already in a great mood, so if we made it this far then why not go all the way.”

“We will just do our best to stay relaxed and keep to our game plan,” Lightfoot said. “At this point you just have to come and play ball and hope a few things go your way.”