UNIONVILLE — Stratton Lovvorn scored 30 points and became the 19th player in Community Viking basketball history to reach 1,000 points as the Vikings defeated the Forrest Rockets 68-55 in a … 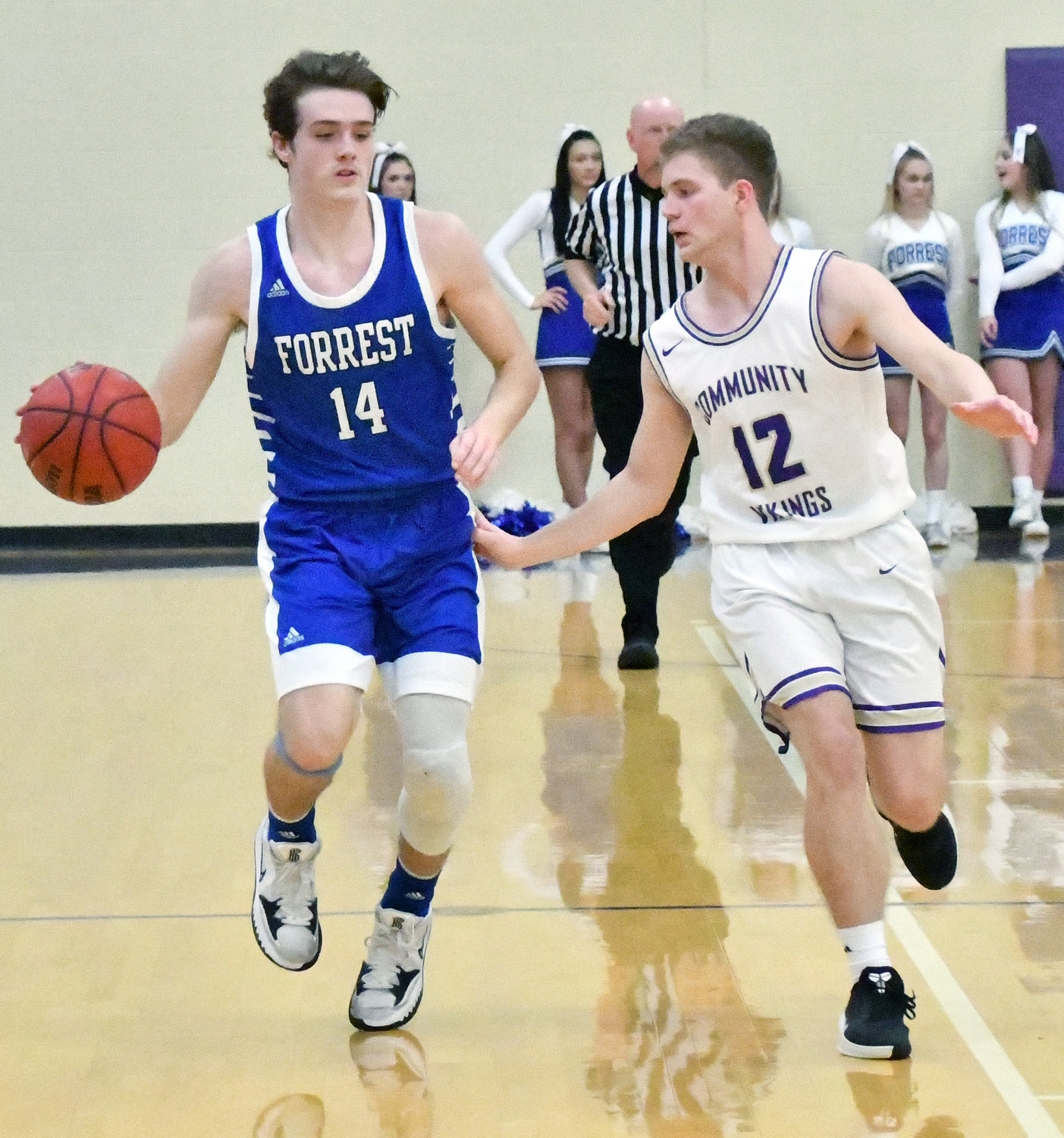 Hunter Bennett (14) brings the ball up the court for the Rockets. Bennett led Forrest in scoring with 26 points.
Tribune Photo by Rickey Clardy
Posted Thursday, February 10, 2022 11:02 am
By Rickey Clardy ~ Sports Writer

UNIONVILLE — Stratton Lovvorn scored 30 points and became the 19th player in Community Viking basketball history to reach 1,000 points as the Vikings defeated the Forrest Rockets 68-55 in a District 7-AA basketball game Friday night.
It was a big night for the Lovvorn family as brothers Stratton and Landon combined for 44 points to lead the Vikings as the Rockets stayed close thanks to a big night from Hunter Bennett.
Community (11-14, 3-2) never trailed as the teams battled to gain the upper hand in the opening quarter. Stratton Lovvorn scored nine consecutive Viking points and reached 1,000 points with a trey at the 5:24 mark. Meanwhile, Bennett netted eight points for Forrest (9-12, 2-3) as the Vikings took a 16-13 lead to the second quarter.
It was Landon's turn to fill the bucket as his seven points paced the Vikings in the quarter. Led by six points from Davin Porter and four from Andrew Timmons, the Rockets cut the Viking lead to 21-19 with 4:14 left before a 7-0 run put Community up 28-19.
The Vikings took a 32-25 advantage to the intermission.
Bennett regained his form with 10 points and Porter added four as Forrest stayed hot for the first four minutes of the third quarter and trailed the Vikings 44-41 with 3:49 left before failing to score the rest of the quarter.
Stratton Lovvorn was equally hot with 11 points as Community added two late free throws and led 46-41 heading to the final quarter.
It was a shooting display by the Lovvorns in the quarter that helped the Vikings pull away. Stratton scored 10 points and Landon added seven as the brothers accounted for the first 16 Community points to help the Vikings extend their lead to 62-49 with 2:57 left. Bennett had six points and Porter had four to lead Forrest, but it wasn't enough as the Vikings took the district win.
Bennett finished with 26 points for the Rockets while Porter added 16.
The Vikings were 15-of-19 at the foul line while the Rockets were 3-of-3.
Forrest followed Friday night’s game with a busy final week of the regular season, including a non-district game on Monday night at Watertown, followed by a home game against Fayetteville on Thursday and a regular season finale on Friday at Cascade.